Having added new rat rods to my collection, I decided that it would be fun to race them. I took the blue one with the gun, and let the game-system run the others. The race was two laps.

And they're off. As ever, I decided to sit at the rear and let the other cars wear themselves out first. The 'other cars' consisted of the red one (spikes, and resistant to bashing), the spiky one (spiky) and the green one (a bloody big engine). 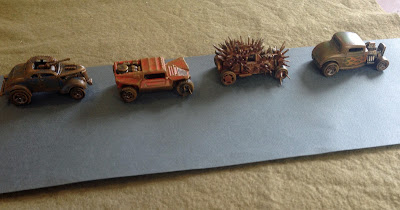 The spiky chap spent a lot of the early part of the race trying to overtake the green car, but by inefficient wide passes. This just cost him lots of bonus dice, to little effect. 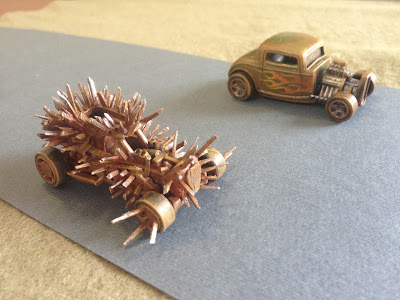 Meanwhile the red car was particularly aggressive. Early on it has suffered issues with its brakes, and dropped back behind me. From then on I was subjected to a series of passing attempts and bashes, all of which I held of, albeit with a small drain on those all-important bonus dice. 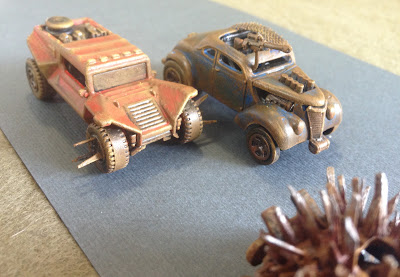 Towards the end of the first lap I decided to push into second place, by blowing the spiky car off the road. I got into position to shoot, then rolled really badly and completely missed. 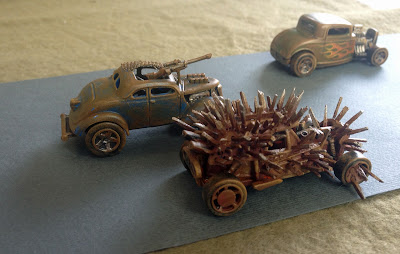 Still in third place I suffered more abuse at the wheels of the red car. 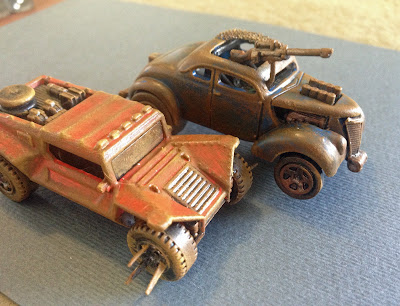 Into the second lap, and the extra shot of bonus dice I got for completing the first gave me enough oomph to nip into second place, and consider challenging green - still the leader. 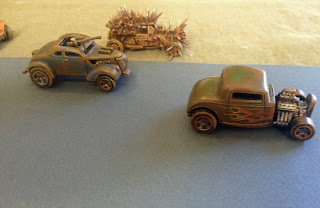 I couldn't quite pass him, and in a burst of aggression he tried to bash me off the road. It didn't work. 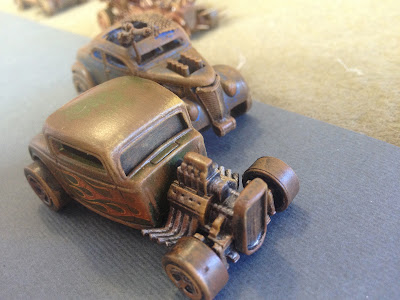 Another near-miss with red, as he swerved too close to me. 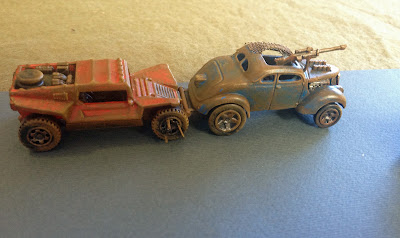 I settled in behind green, building up bonus dice, and hoping that red's aggression would transfer to the spiky car instead, and that maybe they'd bash each other out of the race. 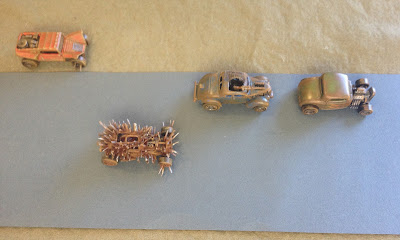 I held off an attack by the spiky car ... ... but the, on the last stretch of track, swerved badly, narrowly avoided a collision ... 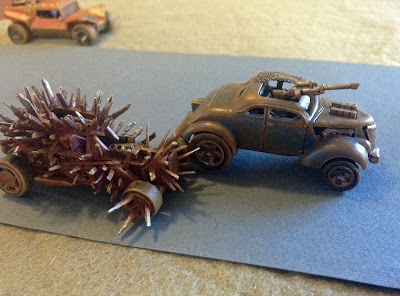 ... and dropped back into third place. 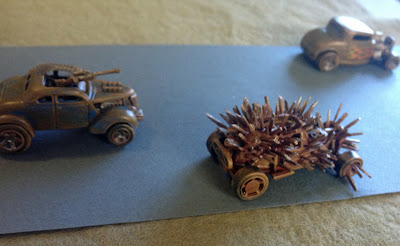 The spiky car made a desperate run for the finish, but green easily cruised in for the win. 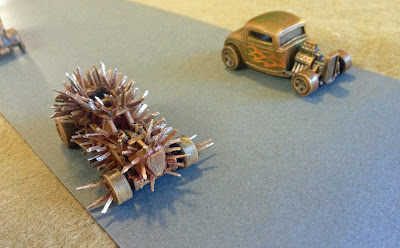 I came third. Red was held to fourth place after a series of random events at the end saw him virtually excluded from the pack for a couple of turns 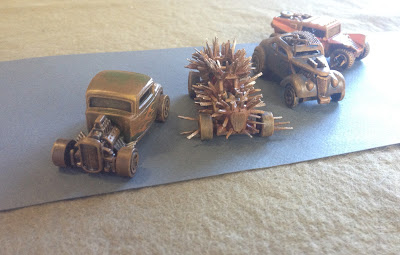 The race played out well, with all cars desperate for bonus dice for most of it. Two of the cars were bashing specialists, but with all of them getting a negative modifier on such activity because of their size, it wasn't going to be as deadly as it could be.

I did get into a rather strange situation at the end with how the bashing mechanism actually works if one car actually drops back directly into another. I think it's an area I need to streamline; I've been fiddling around a lot with that kind of thing with regard to tail-guns and some other actions, and suspect that the random events need to be brought into line with it as well. The truth is that I am now playing about 50% Machinas and 50% my rewrite of Machinas, most of which is on random bits of paper. Writing it all up properly is going to be quite an exercise.