25th October. St Crispin's Day. Patron saint of tanners, leathermakers and Chick Tracts* And a few days after His Day a Band of Brothers in fair Wollongong had a go at Agincourt using big-battle DBA and a great big pile of 15mm figures.

Peter put together the scenario. Agincourt is a tricky one to do, because under most rules the French seem pretty much stuffed from the start. The practical wargamer commanding the French would look at the English, tucked in behind the muddy fields, and say 'Sod this for a game of soldiers' and go home. In our scenario the French had six commands to the English three, and were, to some extent, competing against each other, with points to be scored between themselves for making kills. This was designed to encourage an aggressive push forward and produce a French 'winner' even if the game went the way of history.

The fields started out as rough going, which meant that they weren't too hard to negotiate. However after a few turns they became difficult ground, limiting group moves and combat. This gave the French another incentive to push through fast and try to punch some holes in the English line. 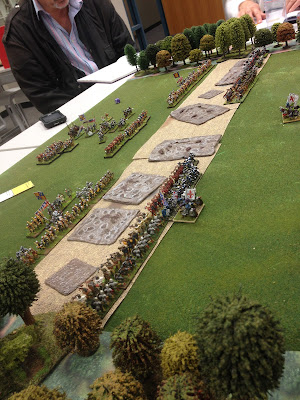 The French left. I had the van and rear on this side. Ralph took the tow centre commands. Geoff had the French right van and rear. 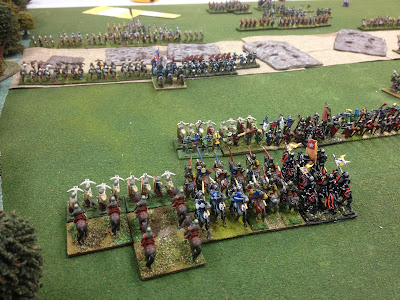 The French right plodded through the fields. 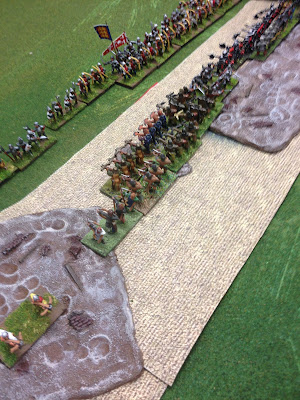 So did the French left. I led with my crossbows, hoping to open up a few gaps in the English line which I could exploit with my dismounted knights and sergeants. As you can see, both sides suffered casualties and retreats, but a hole failed to materialise in the English line. 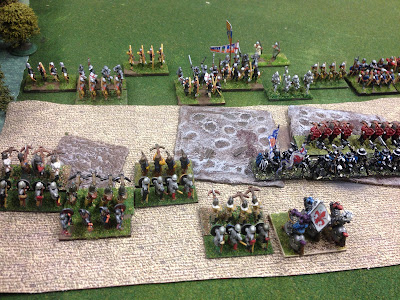 Things went better on the French right, where Geoff led with his men-at-arms, pushed back the English and managed to get the fight going beyond the fields. 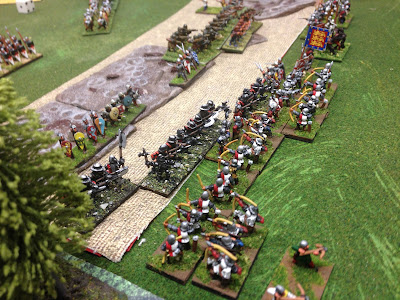 The centre became a total traffic jam, as troops piled up trying to cross the fields to get at the English. At this stage the fields shifted from being rough to being difficult. 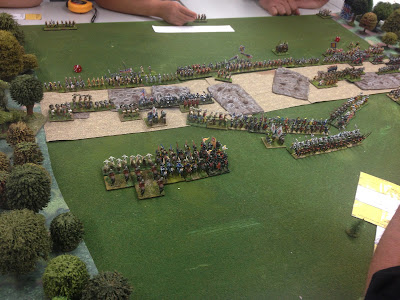 I finally got a few men at arms into combat, but they didn't achieve much. 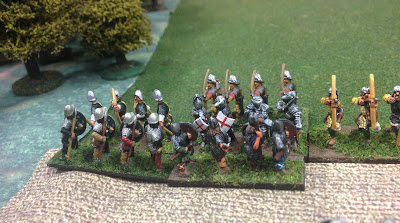 Meanwhile Geoff was pushing back the English left, and a fierce fight was spreading into the centre as well. 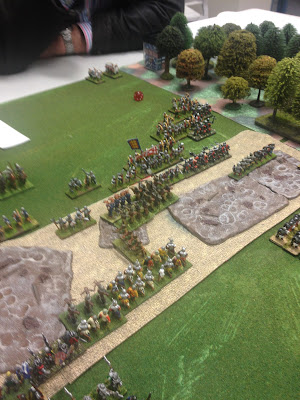 A good job, as on my side of the field the French van was collapsing and the rear had held back waiting for the promised gaps to appear so that they could ride through to Calais and glory. 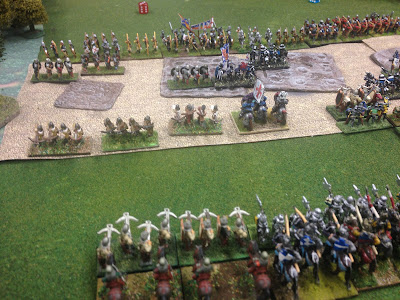 Still a right mess in the centre. 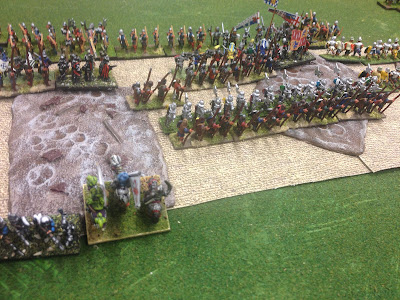 On the French right all three commands had gone demoralised. I had a demoralised command on my side. The English centre was one element away from breaking. And we had this combat - the French men-at-arms destroyed an English archer element. This broke their centre command, and with it the army. 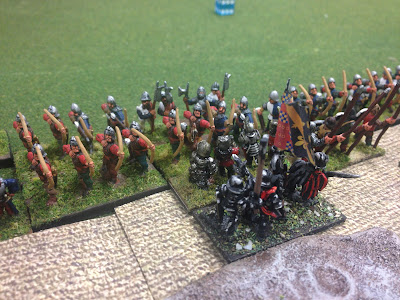 But a close one. The French were themselves on a few kills away from breaking. 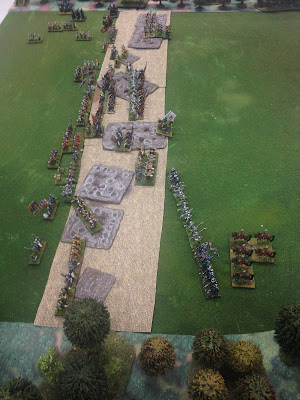 The fact that it went to the wire shows a deftly designed scenario, so many thanks to Peter for putting it together. To be honest we lost track of kills made by the French, but a unanimous decision granted the honours of war to Geoff, who really did all of the heavy lifting. Ralph provided solid support in the centre, whilst I just arsed around on the left keeping my English opposite number (Daniel) from going anywhere else where he might actually be useful.

A big DBA game, I think you'll agree. And there's a real desire to do more.

*Wikipedia says 'cobblers', so I'm guessing that's what they meant. That or climate-change denial.