MOAB is happening in less than two weeks. As well as playing in the HOTT competition on the Monday (for which I still have some elements to prepare), Victor and I are running some gladiator games on the Saturday. These will focus mostly on 'Munera Sine Missione', so I thought that I'd better give it a whirl this evening in order to remind myself how to play it. In addition we have thrown a few rules changes around in the last year, and I hadn't tried some of them out yet, so this was an opportunity. Don't worry; they're not major changes; they are mostly adjustments to the way some weapons are defined and used.

First two figures out of the box ended up in the arena; the Gaul Bregans, with his big shield and big sword faced the diminuitive Murmillo, Pugnax. Bregans' sword can be used two-handed if he discards his shield, otherwise it is an unwieldy weapon. However it is capable of shattering his opponent's shield.

And that's what happened. The two gladiators exchanged blows, and Bregans got in a good hit and smashed Pugnax's shield. Unfortunately Pugnax then tripped Bregans up, put a sword to his throat and forced him to appeal to the crowd. The crowd loved him, though, and he was spared. 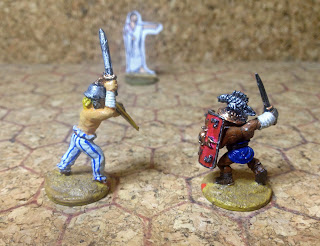 I wasn't trying out skills, so Pugnax just got to fight again as he was, this time against the net-wielding Medusa. She gave him a hard time, entangling him once even, but he grabbed her net and pulled her over twice, wounded her more than once and soon had her down and appealing for mercy. She got it as well. 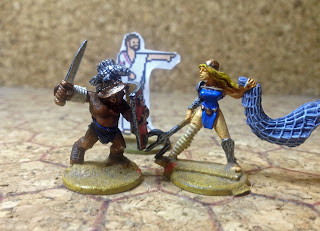 Finally Pugnax faced Margareites, a simple sword-wielding fellow like himself, but with a smaller shield. They danced around each other for a while, before Pugnax got into his stride and, over the course of a few turns, stripped Margareites of his sword (broken), his shield (kicked out of the way) and his helmet. Margareites had to resort to fists and harsh language ... 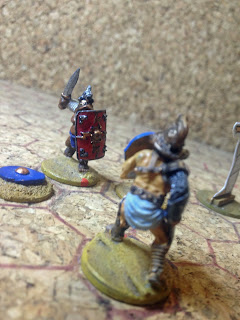 ... until a fit of agility saw him blind-side Pugnax, retrieve his shield and use it to smash his opponent to the ground to win the fight. What a comeback! 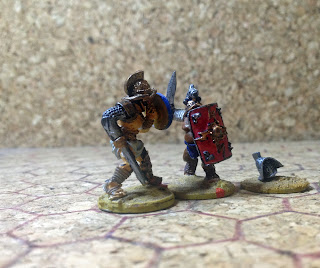 Oh, and the crowd were merciful again.

Playing 'Munera Sine Missione' is like riding a bike; you never really forget.

A few more games over the next couple of days should see me back to where I can run it without thinking too hard. Then I have to sort out some Machinas! to take as well, as we're offering that this year instead of the chariot-racing.