As well as the regular gladiator games we've run for the last couple of years, Victor and I are hoping to run some Machinas at MOAB this year. Previously we've run Charioteer, but really neither of us have any visually impressive chariots yet, so we abandoned it for this year. It was Victor who suggested Machinas as an alternative.

I am thinking of running a simple road-chase setup, rather than a race, as thanks to Mad Max this is a familiar scenario to most. This evening I tried out a few combinations of vehicles to get a feel for what might and might not work,  So here's a few pictures.

The games saw the debut of my bikes. They really are a bit small compared to most of the cars, but they'll do. 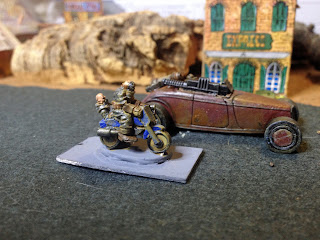 This game saw my hobo roadster hold off a bike and car until they both gave up the chase. There was plenty of ineffective gunfire, however. 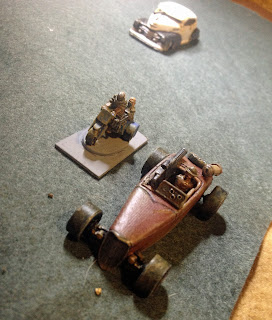 A second game saw my school bus hold off a succession of vehicles. The first two aren't pictured - a buggy and the flamethrower-toting Plymouth Fury. The latter got in a couple of good shots on the bus, scoring no actual damage because of the vehicle's heavy armour, but wearing down its bonus dice. Both vehicles quit the chase, but luck wasn't with the bus, as other vehicles joined in. Including the mighty armoured excavator. 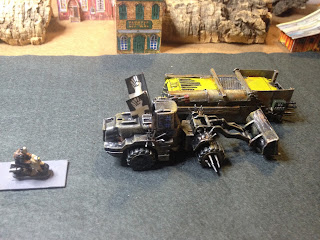 I reasoned that dropping back was the best option for the bus - being behind the excavator was safer than being in front of it. But I didn't pull off the maneuver, and the big digger swung across for the kill. With no bonus dice left I didn't stand a chance. The two massive vehicles smashed together ... 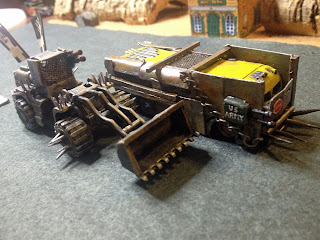 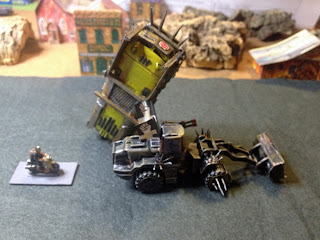 ... and it was game over. I didn't even get the satisfaction of landing on the bike (a one in three chance). 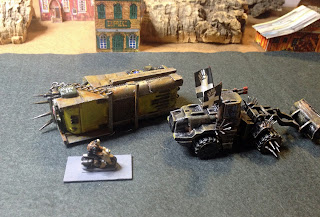 Mind you, I like to think that motorcyclist had to pull over in order to change his underwear afterwards.

My plan is to let interested players play the pursued vehicle, with the game's AI (or my version of it) running the pursuers. But the AI still has a few wrinkles in it, which I need to work out over the next couple of days. However I have a basic setup ready, and that's what's important.
Posted by Kaptain Kobold at 23:37