The Military In 'Giant Monster Rampage' 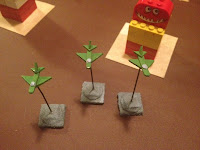 In the most recent games of 'Giant Monster Rampage' I have played, I have been using the swarm rules to represent human military units. They seem to work OK; some things feel a little abstracted, but the way the use of Atomic Power limits how many elements of the swarm act in each phase is no different, really, to the PIP system in HOTT.

In this post I though I'd detail some basic military swarms. Each is 100pts. I tend to run my monsters at 200pts, so you get two military swarms for each opposing monster. Obviously they can be tweaked to give more specific vehicles or units. For example, a slower, tougher jet plane design could be given Barrage Blast to represent some form of bomber. Not very good for defending a city, though, unless you're not bothered how much of it remains standing afterwards.

These units work best when you use the option where a player is allowed to take their Movement, Ranged Combat and Close Combat phases in any order they like. This allows for hit and run attacks, and repositioning of assets to strike at key targets next turn. 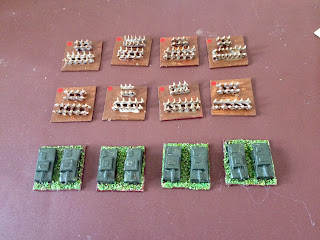 All military units are considered to belong to the Mechanical kingdom, so they automatically get the Alternator power.

'Volley Blast' is a reworking of the power 'Archaic Blast', currently in the 'Toy Battle System Digest'. Whilst it can be used for a number of effects, it is designed to simulate the massed fire of small-arms and other infantry weapons against a giant monster - the chances are they will hit the target, but are unlikely to ever inflict any real damage on it. 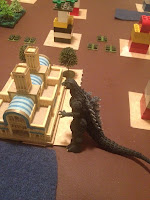 A combatant with this power has a ranged combat attack that fires a mass of small projectiles that, whilst they are unlikely to cause much damage are very difficult to avoid. When this power is activated, the monster spends 1-5AP (player's choice). It then determines the To Hit number and rolls a D10 for each AP spent. Ignore all rolls except the highest, and compare that to the To Hit number to see if the attack hits or misses. A '0' scores a critical hit as normal. Due to the small size of the projectiles, any target hit by a volley blast must double its toughness before rolling to absorb the damage inflicted by it. When a combatant’s toughness is doubled, the maximum rating it can have is 8. If a combatant’s toughness would be greater than 8, it becomes 8.

Obviously if the military are in play you don't bother with the Military Strike Phase as well. If you're playing the tanks, you are the military strike phase.