Aussie Christmas television is woeful - (I originally typed 'Chrustmas' there, which is, of course, what they have in New Zealand :) ) - We assume that the fact that it's Summer and that everything's more outdoors here means that people don't want to spend the evening indoors watching Christmas specials. Certainly no-one seems to be pushing much in the way of things, aside from 'Doctor Who' on Boxing Day (which we'll miss, because we're going to go and see 'The Hobbit'. In 3D. for $5 each. A thank-you from the UoW Gamer's Guild for our help in running Gong Con earlier this year). We'll catch up on the Good Doctor when we get home using iView. Or I'll use a proxy later today, pretend to be in the UK, and watch it in the BBC iPlayer ...

Anyway, with a major internet outage, nothing on the telly and that fact that it was pissing down with rain, we played boardgames. Which was great.

Now I would have been happy to have played 'Battle Cry' again, but it doesn't really suit four. So I broke out some old classics.

Here's the start. For those not familiar with the game, think 'Mad Max II' as a family boardgame: 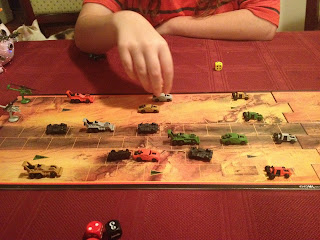 We dumped Catherine pretty quickly, then Maya and I left Cei (who was beset by abysmal movement die rolls) far behind us to fight it out for the finish. Those are my green vehicles up front, with Maya's grey juggernaut following them: 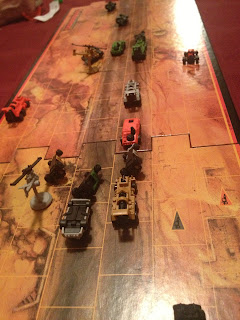 With the advantage of moving second Maya got to keep shooting and ramming me, and it was only a matter of time before she knocked out my last vehicle to win the game.

I was denied my revenge, as the children then wanted to play 'James Ernest's Totally Renamed Spy Game', formerly 'Before You Die, Mr Bond'. This was a big favourite of our Summer holidays in the UK, where we used to play it in whatever pub we inflicted ourselves on for our lunch or evening meals (along with 'Fluxx', which we played in a pub here on Christmas Eve when we were out celebrating Catherine's birthday). 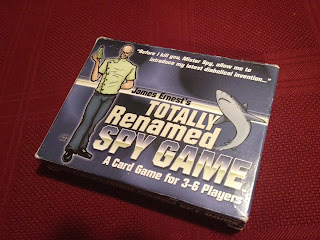 The high point of the game for me - luring the Invincible Sarno into my cloning facility and giving him a chance to use his Q-Branch biro to escape. He didn't: 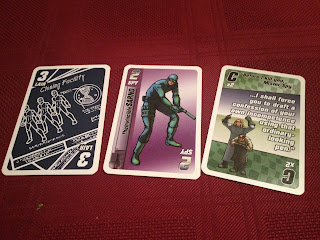 Everyone else raced ahead of me on points, and the game ended when Maya accidentally fed what she thought was a bomb into Cei's powerful villain lair; it was actually an incompetent spy who was promptly shot with no further ado to give Cei the two points he needed for victory. Silly Maya.