London, 1944. Already under attack from two kinds of German V weapons - the V1 missiles and V2 rockets - the city now faces it's greatest threat: the V4*. Rockets and missiles are all very well, but they only destroy whatever they land on. The V4 was different. A massive automaton equipped with a wide range of weaponry, this pinnacle of Nazi technology could be launched at the city via disposable rocket boosters, and would then proceed to devastate the surrounding area.

It was a true weapon of terror.

And when one landed in West London, only a few brave tank crews and RAF pilots stood between it and the destruction of the city.

And so the scene is set for another game of Giant Monster Rampage. To the west, the German V4 - a single mighty robot equipped for destruction. To the east, backed up against the Thames, a full company of tanks and a squadron of RAF fighter-bombers.

This was my first game of GMR using the swarm rules. Whilst the V4 is designed as a single monster, a swarm consists of multiple bases, each with the same profile, but individually weak in terms of the number of hits it can take. The V4 was built on 200pts, whilst the British defenders had two swarms, each of 100pts:

'Gun Blast' is a new ability I derived from the ranged attacks allowed to Minions. It costs 5 points per 6" range (up to a maximum of 24") and regardless of range costs 2AP to fire, inflicting a single wound. It's basically a cheap, no-frills, ranged attack.

The V4 was a plastic robot toy I picked up at a local market, whilst the tanks were scratch-built from card. The planes were top-down counters; I tried making some from card, but the design wasn't satisfactory. The terrain was the ubiquitous Lego.

Here is the setup (Click on it to make it bigger. Go on): 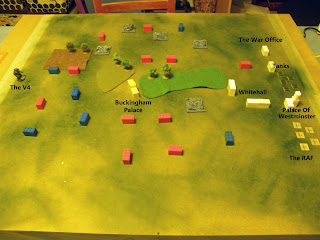 It's actually based on London, although obviously I didn't include all of the buildings; it can be assumed that various buildings are being demolished as the action takes place. The ones on the table represent those that score points. The white buildings represent key installations for running the war effort, and were worth double points. However they were tougher than normal buildings - Toughness 6 rather than Toughness 4. The yellow building in the centre was Buckingham Palace. This only had a Toughness of 4, but was still worth double points if destroyed. However doing so gave the British troops a bonus on their regeneration rolls to represent their indignation. The grey areas were bomb-sites - there was already rubble on this battlefield. The green areas were parks, and were just for show.

Here is the V4, ready to begin its attack: 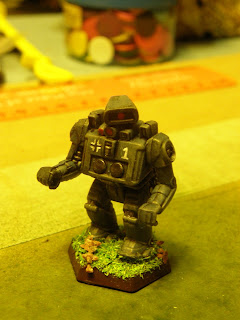 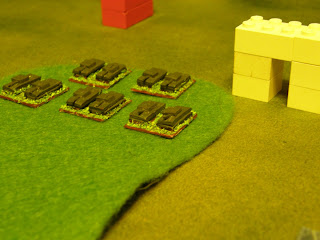 The RAF fly over London: 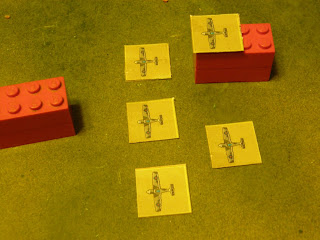 The V4 rolled well for Atomic Power on the first couple of moves (Atomic Power is used to fuel blasts and use certain other abilities). This meant it quickly cut a swathe of destruction before the British troops even got close to it. This is the last picture of Buckingham Palace before it was incinerated by the robot's Flame Blast: 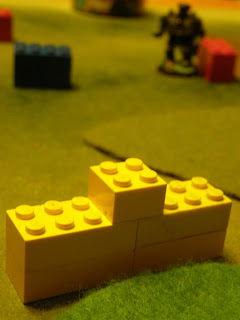 This picture shows the two sides advancing towards each other. Buckingham Palace had been destroyed in the centre, as had Admiralty Arch, hit by a stray Barrage Blast aimed at the tanks. Indeed one base of tanks  had also been lost: 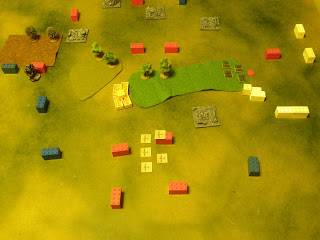 The British engage the V4. They actually hit it several times, but as well as rolling well for Atomic Power it was lucky with its Blast Armour as well, blocking several damaging hits: 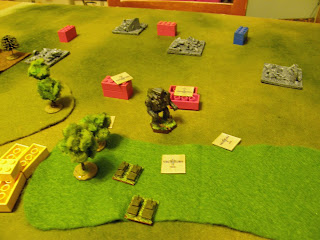 And that pretty much summed up the game. The V4 advanced across the table, being shot at  by the planes and tanks, who achieved little. Indeed the tanks didn't score any damage at all; their shots either missed, or bounced of the armour. The RAF managed to score five wounds in total - it takes ten to bring down the V4.  Meanwhile the V4 targetted all of the key buildings, and took them out with consummate ease. The Houses of Parliament were incinerated, whilst the buildings along Whitehall were destroyed by mighty swings of the robot's iron fists. In this last picture the V4 turns its gaze on the War Office, prior to demolishing it with a Mechanical Blast: 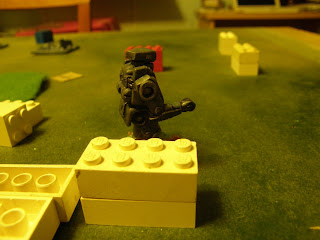 At this point I drew a veil over the proceedings. Every key building had been destroyed, along with three tank bases and two aircraft bases.

It was a fun fight, although I'm not sure how balanced it was. The V4's weaponry was more than adequate for dealing with its targets, whilst those of the British seemed inadequate, although that could have been down to lucky rolls with the Blast Armour. Mind you, the V4 is a little limited if it doesn't get good rolls for Atomic Power; you only roll a d10 each turn to see how many points you have available, and to use all three attacks uses 9 points. As you can see, it's a rare turn in which all three weapons can fire.

What the British really need is a giant mechanical device of their own. How different things could have been if something like that had been defending the city ...

*Yes, there was a V3. It was a big gun designed to shell London from France. It was overrun by Allied troops before it was ever used. But you knew that, didn't you.
Posted by Kaptain Kobold at 17:00