I did another night at the club yesterday, and this week Geoff and I played HOTT, so I picked one of the games to be this week's HOTT 52 feature.
It's been years since I last had the Sisters out - a 25mm sci-fi army very loosely based on a certain manufacturer's Battling Sisters, and with a few personal elements thrown in for good measure. You can read about the army HERE in what was one of my very earliest Army Showcases. 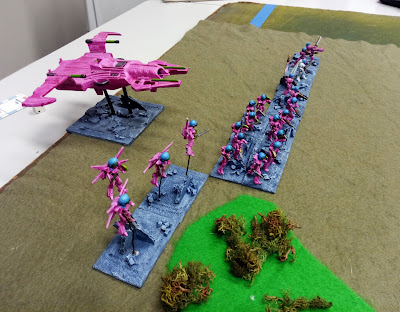 Geoff selected an army from my 25mm Dwarves, which are a mix of mantic and 3D-printed figures. A core of blades were backed up by shooters, two elements of artillery and a behemoth. The artillery were a dangerous foe for an army which relies on two heroes for much of its impact.

And that proved to be the case. I was a bit clumsy with my deployment and early moves, and exposed my hero general to artillery fire. 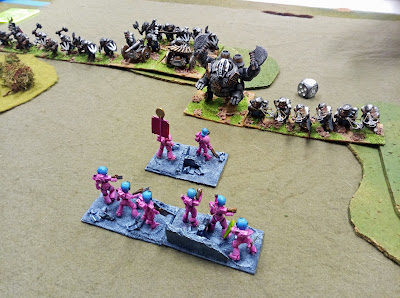 Game over. The first element kill of the game won it for Geoff. 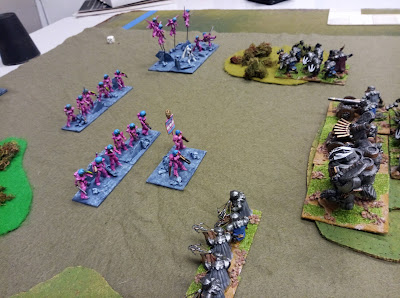 However we didn't feel inclined to set up the game and play it again, so Geoff said to carry on and assume his shot missed. He'd officially won, but there was no reason why we couldn't continue.

The Sisters are a fairly swift army, assuming they get the PIPs, which, it has to be said, was generally NOT the case in this game.  My hero general was quickly supported by some warband and they took the fight to the Dwarves' left. 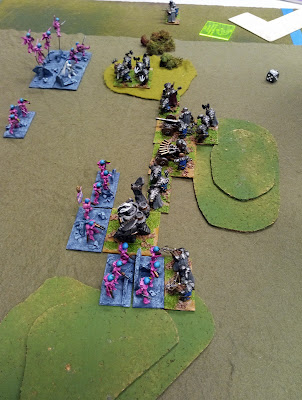 One element of shooters fell fairly swiftly, and the other was driven back. The behemoth got the better of the Sisters' general, and drover her back, but exposed its flanks in the process. 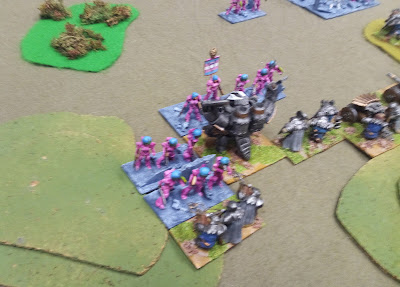 On the other flank Geoff advanced the majority of his blades through some bad going, which would have left them vulnerable to attacks by my hero, paladin and a couple of flyers had I got any PIP rolls higher than '3' at that point in the game. 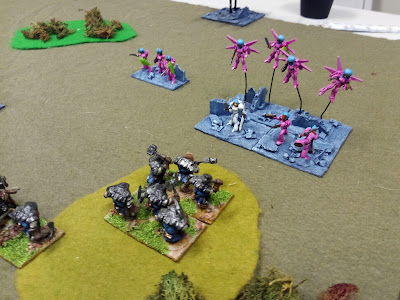 A group of Sisters charged one of the guns. 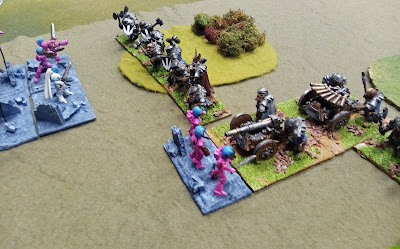 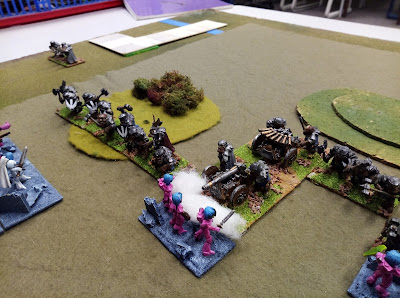 But on their right the Sisters were very much on top of things. They overwhelmed the exposed behemoth, and destroyed the last shooter. 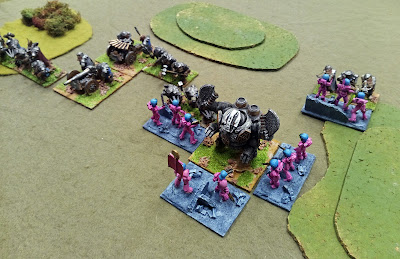 And the turned on the blades in that part of the field, with the general leading the attack and the line troops providing flank support. Geoff turned his artillery in response, and did manage to shoot an element of flyers that had moved over in support, but it was too late. The Dwarves had lost 12AP. 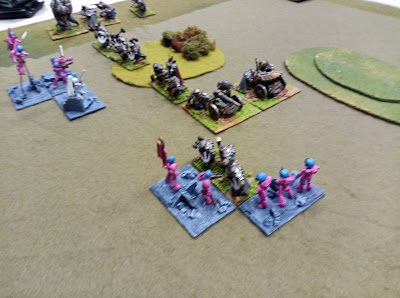 So we had two winners in this game. Geoff won the original game, and I won the 'rematch'.

It was fun to have the Sisters out again; they're a fast, punchy, but brittle, army that are always entertaining to play.
Posted by Kaptain Kobold at 07:24