For this week's HOTT game I got out a couple of my mythological armies - the Sumerian Spawn of Tiamat and the Australian Horrors of the Dreamtime. Tiamat ended up defending. 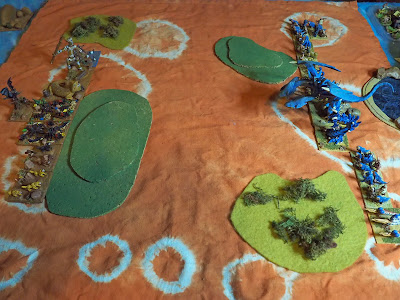 Tiamat herself is a magician general, and is supported by an army made up of hordes and knights, with  beast, a behemoth and a hero as extras. 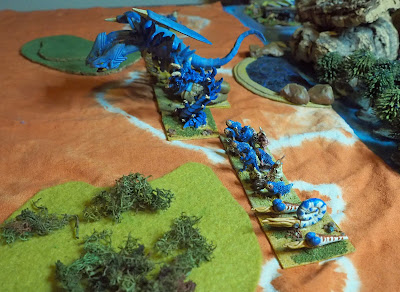 Here are some of the knights and hordes. 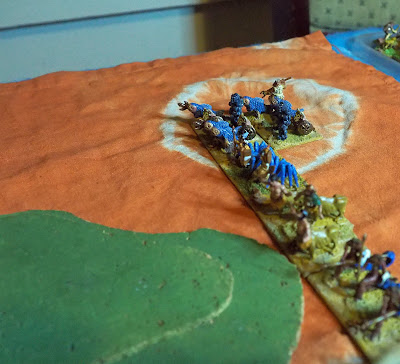 The Horrors have a flyer general and are mostly a mix of hordes, beasts and behemoths. The battle started with the Horrors deploying lurkers against some of Tiamat's beasts and destroying them. The lurkers would then go on to hover on Tiamat's left flank for the rest of the game. 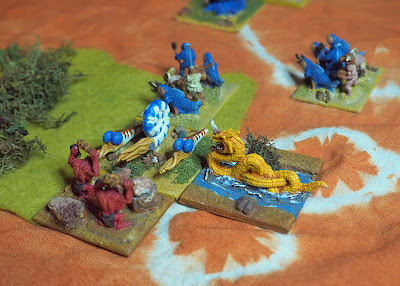 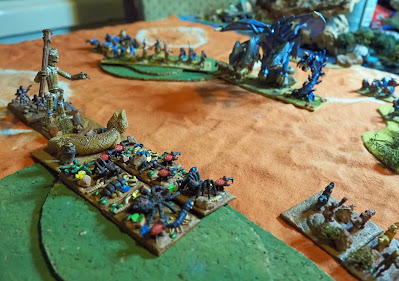 The mighty Wulgaru and the Great Whowie of the Murray River led the way. 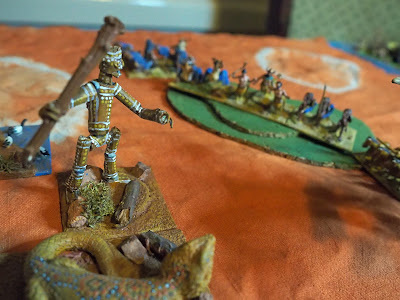 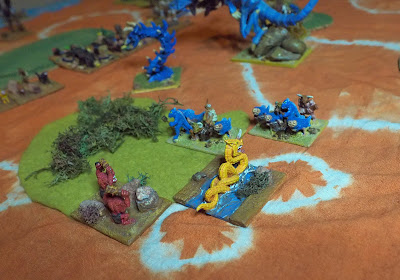 The Horrors' left was covered by their magician element - the Goose Women. 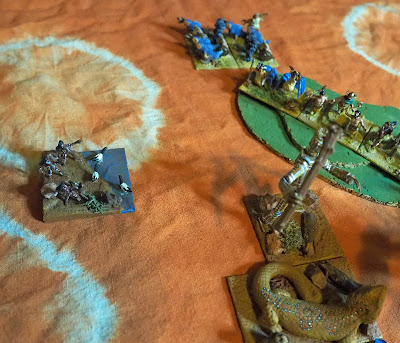 One of Tiamat's monsters clashed with the Horrors' insect hordes. 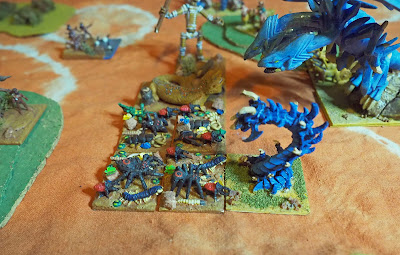 Both armies were closed up now and looking somewhat fragmented. 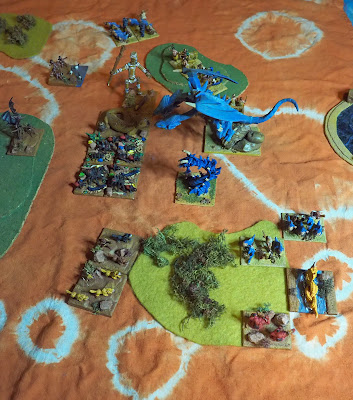 The Wulgaru charged Qingu, Tiamat's hero consort, and drove him back. 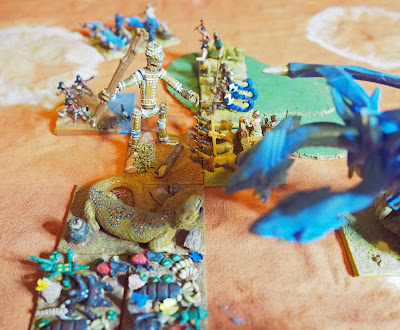 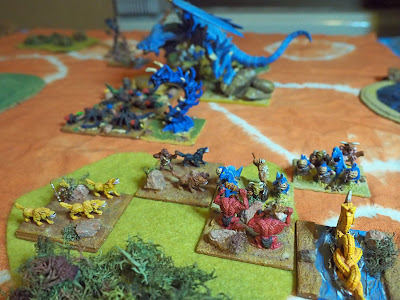 Tiamat's magic drove off the Whowie. 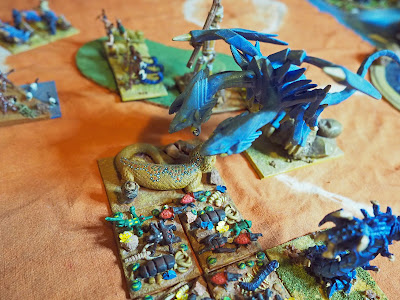 The Horrors' general, Marmoo, flew in on Quingu's flank as the Wulgaru pushed him back further. 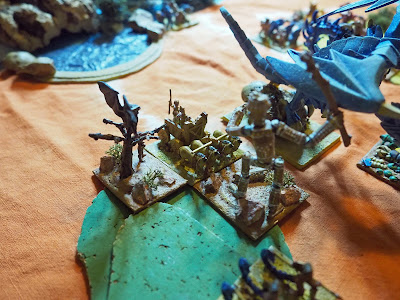 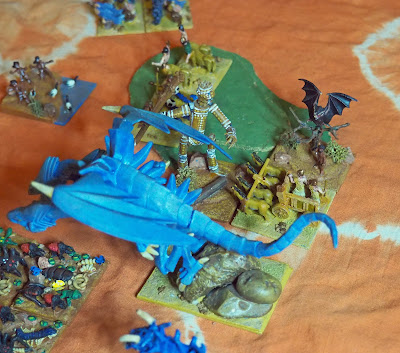 Tiamat moved to oppose the insect hordes, but also to get away from being an overlap so that she could continue to use her magic. 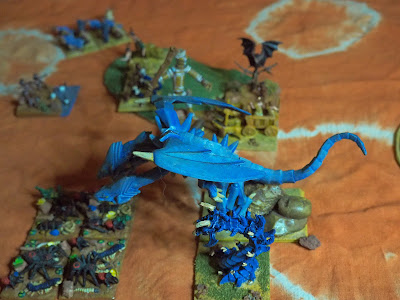 Tiamat's behemoth got sucked into the fighting in the rough on the flank. 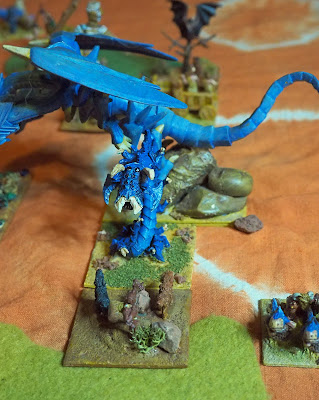 It destroyed some beasts and drove off some of the lurkers. 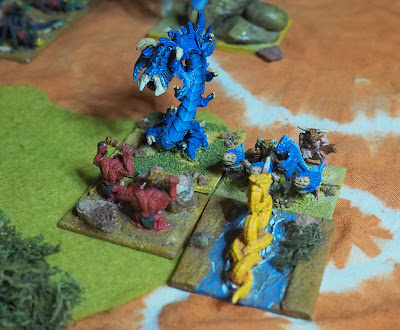 Marmoo and the Wulgaru still couldn't finish off Quingu, despite their positional and combat advantage, but magic from the Goose Women ensorcelled him. 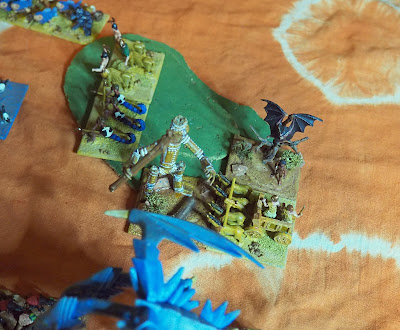 This allowed Marmoo to hit Tiamat's flank as his insect hodes came in from the front. Tiamat fought them off. 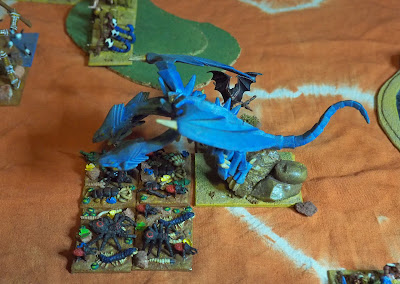 Tiamat used her respite wisely, and cast chaotic magic at Marmoo, destroying him.

The Horrors had lost their general, but Tiamat's forces had suffered more losses, so the armies fought on. 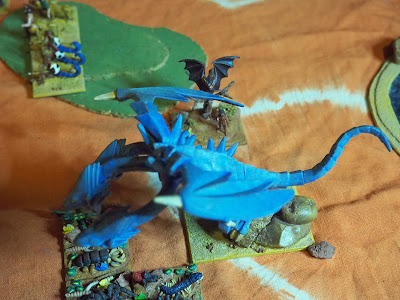 The Horror's were paralysed by the loss of their general, though, and halted for a turn. Tiamat's forces took advantage of it and surged into the attack. The behemoth destroyed another group of beasts ... 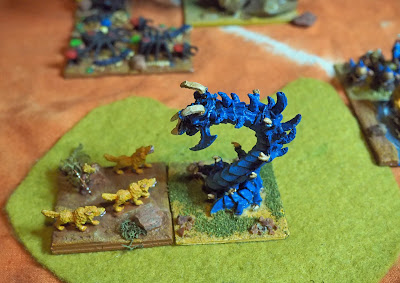 ... whilst her right overwhelmed the Goose Women. 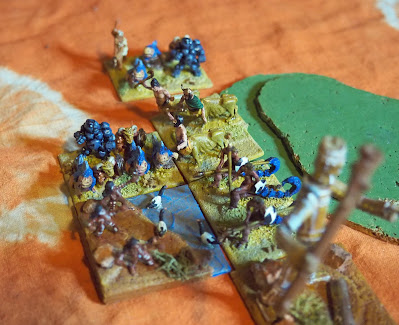 This meant the Horrors had now taken sufficient casualties to lose the battle. 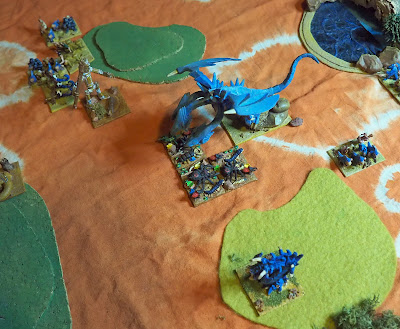 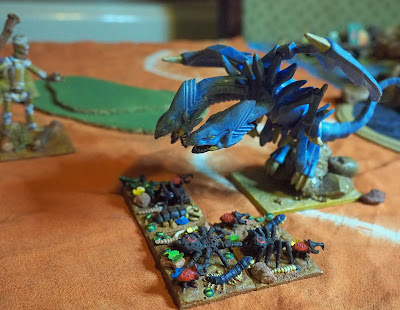 This was a close battle with a surprising amount of magical activity and some swings of fortune back and forth.
Posted by Kaptain Kobold at 12:48