I am currently rereading my favourite book on WW1 air-combat, Alexander McKee's 'The Friendless Sky'. It's a slim volume, but covers a wide range of stories from across the whole war. The early chapters feature a few accounts of the service of then-Lt Louis Strange, and his attempts to mount guns on his planes right back in 1914. This action is covered in the book (text nicked from Wikipedia):
"He also designed and fitted a machine gun mounting to the (Avro) 504, consisting of a crossbar between the central struts over which was slung a rope, allowing the Lewis to be pulled up into a position from which the observer, seating in the front cockpit, could fire backwards over Strange's head. On 22 November 1914 it was with this arrangement that Strange claimed his first victory; with Lieutenant F. Small as gunner, he attacked an Aviatik two-seater and forced it down from over Armentières to make a bumpy landing in a ploughed field just behind the British lines."
Apparently the first burst of machine-gun fire shattered the control panel of the German plane, causing the pilot to panic and eventually give up, landing his aircraft. When Strange and Small landed, they had to rescue the pilot from his infuriated observer.
Anyway, whilst I know most WW1 air gamers like their Camels and Triplanes, I have a soft-spot for these early actions, and trying to game them. With a tricky afternoon meeting/training session in the offing, I decided to distract myself in my lunch-break with a quick game of 'Spandau and Lewis' based on Starge's first 'kill'.
Strange and Small were flying an Avro 504, which is a surprisingly nifty aircraft for this early in the war (and one which was still in service in 1918). It was armed with a single machine-gun firing into the rear-arc only. 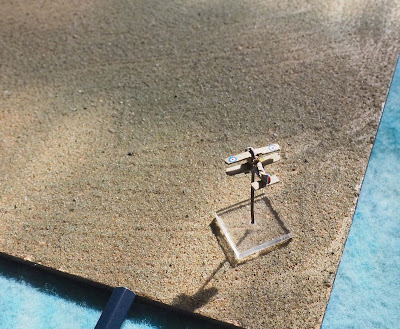 The Germans had a Aviatik two-seater, probably a B1. This was unarmed, but I gave the observer a rifle. 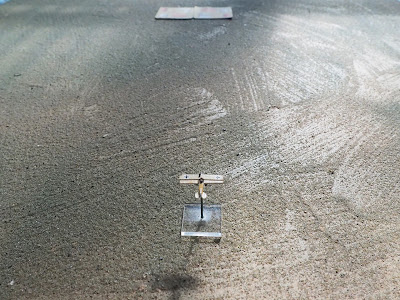 The Germans had to fly to a village at the other end of the table, overfly it and observe it for one turn, then exit from their starting edge. Strange and Small had to shoot down the German plane. I know in the real action they forced it down; I am assuming that in this case an effect which shoots down a plane could simply be that it had taken enough damage for the pilot to land it. 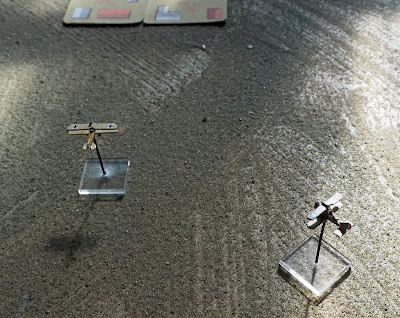 Strange chased the Aviatik, needing to overtake it in order to bring his observer's gun to bear. Meanwhile the German observer took pot-shots with his rifle. 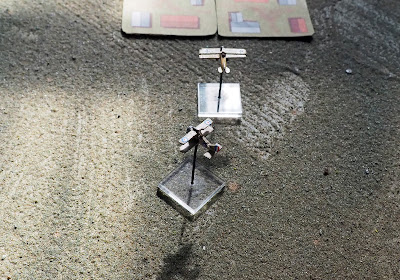 The Germans scouted the village. Could they get home? 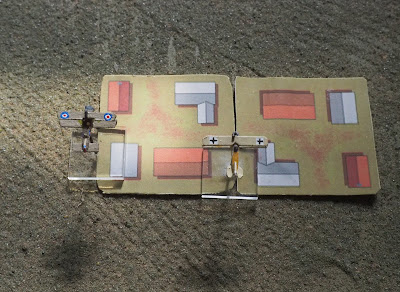 Turning tightly they started their escape, whilst Strange struggled to line up a shot. To make matters worse, he was wounded by a shot from the German observer. 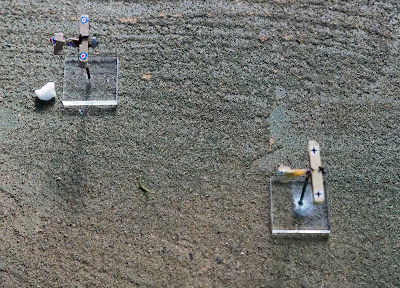 The German plane turned tightly, losing speed, and the greater speed of the Avro 504 allowed Strange to pull ahead and give Small a shot. It had no effect on the German. 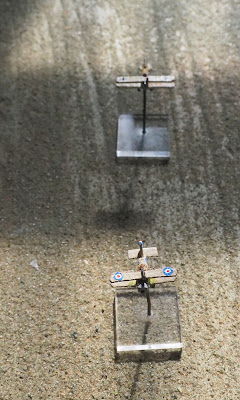 The Aviatik banked right, and sped away from the Avro. Strange chased after it, trying to get in front again. 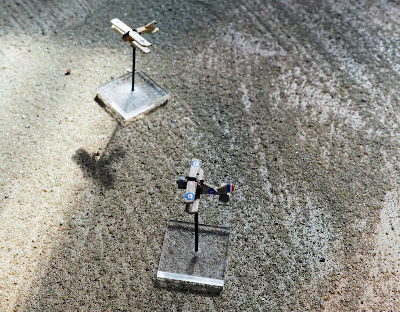 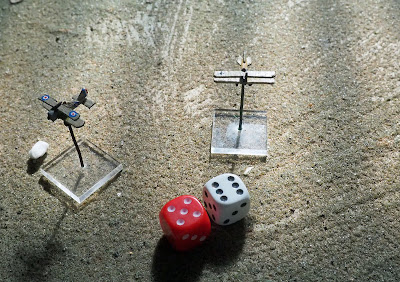 But it wasn't enough to down the German plane, which made its escape. 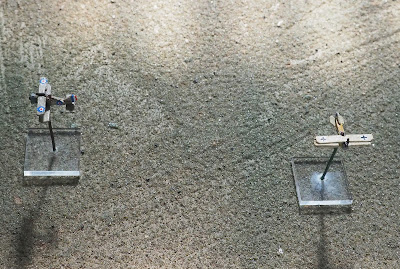 After that it was back to work, but this evening I had another go.
In this second game Strange got into a good position ahead of the German, pretty much ensuring a shot at  it wherever it went. 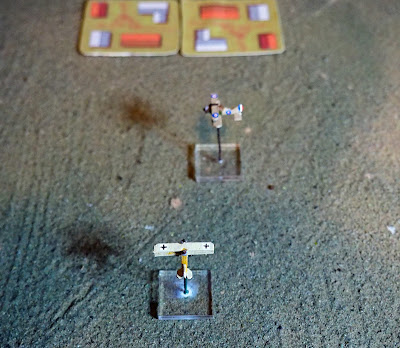 Two shots, in fact, inflicting some light damage only. The return rifle-fire was ineffective, but did put a hole in the fuselage. 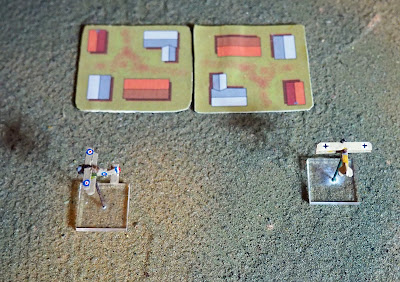 The German overflew the target, as Strange slowly brought the Avro around for another attack. 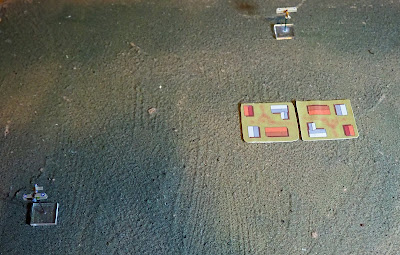 As the German pilot plotted a course for home, Strange flew the Avro in front of him. 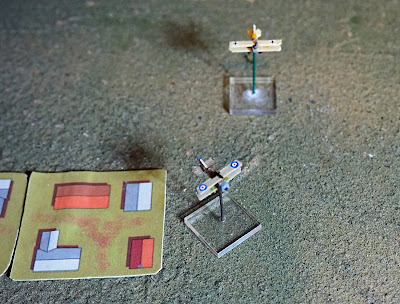 The German pilot sped up to avoid falling behind the Avro, giving his observer a perfect close-range shot. The observer failed to make anything of this advantage. 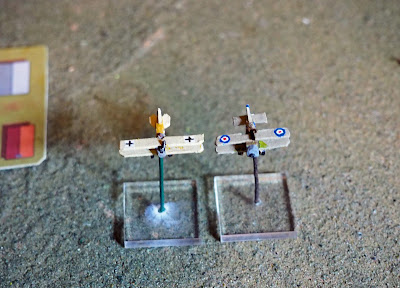 As the two planes sped east, Strange swung the Avro in front of the Aviatik. 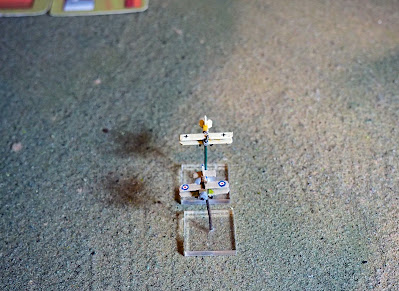 Small empted a couple of drums at the German, and was rewarded with a sputtering sound from their engine, as well as some obvious structural damage.. Slowed, the German plane had to endure more shots from the Avro, but managed to make it to safety, with a damaged engine and only one hit left. 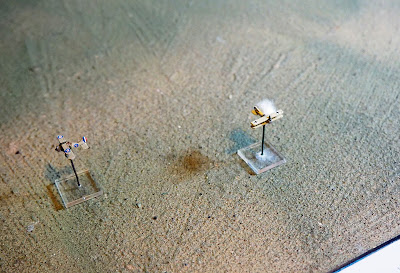 So the second game was more successful for the British crew; they came close to downing the German plane with only the fact that the critical hit they scored was one of the less deadly ones saved their opponent.
This is a fun scenario, and quite difficult for the British. The Avro 504 is a superior plane to the Aviatik, but neither has the power to perform tight maneuvers in a dogfight and still maintain speed. The German's rifle has a great field of fire, but is a relatively ineffective weapon, but the British machine gun is positioned such that Strange has to constantly try and keep the German in  his own rear-arc, which is not a great ange from which to attack an enemy.
As I say, I love these early war actions.