Yesterday I matched Aztecs and Mound Builders using HOTT. Today I fought the same pairing using DBA. This is a bit of a hordes-fest, with the Aztecs fielding six elements of them, and the Mound Builders three.

The Aztecs invaded. To deny the Mound Builders the chance to line the hamlet and woods with archers they chose that edge to invade from. 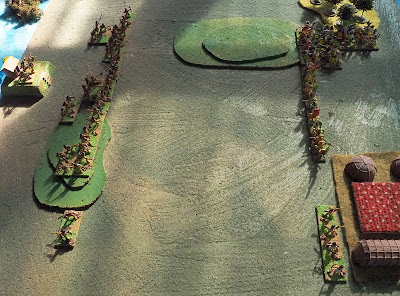 This gave the Mound Builders a strong hilltop position for their archers. 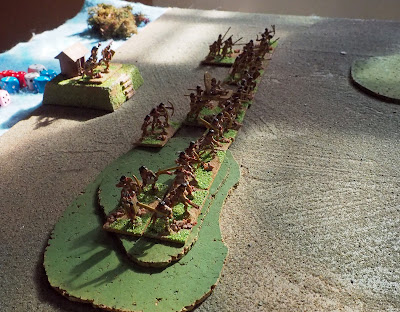 The Aztecs massed their hordes on the other flank. They would need some reorganisation after clearing the woods. 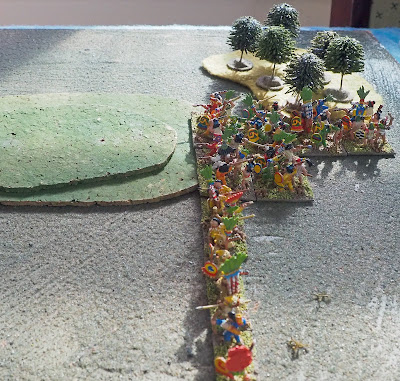 The Aztecs advanced, whilst the Mound Builders reorganised their line to receive the attack. In the foreground can be seen the Aztec skirmishers, who closed rapidly in order to pin that flank. 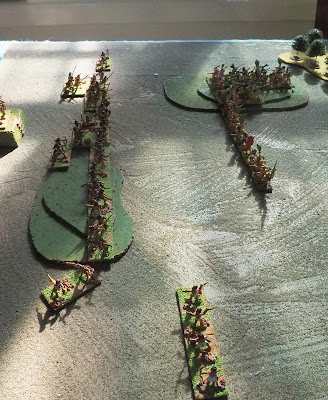 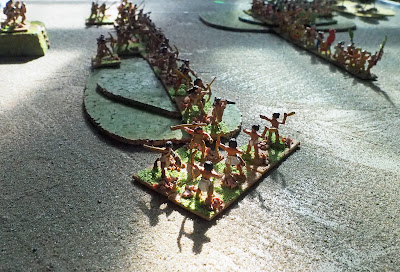 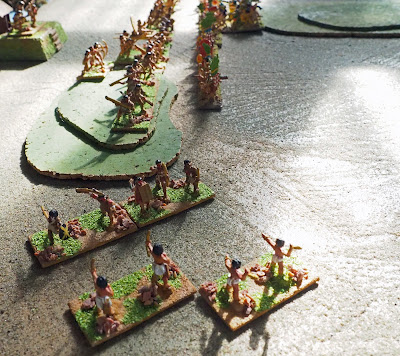 The main Aztec line charged, a hail of missiles from the hill having had no effect in slowing the advance. 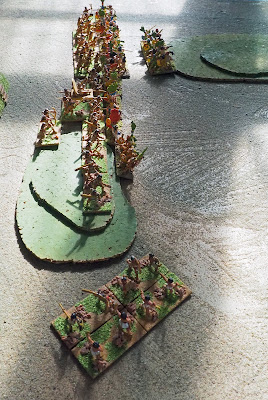 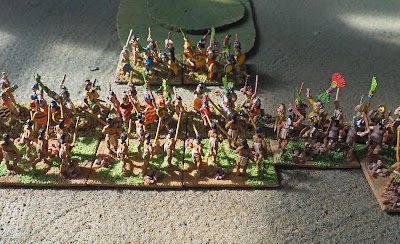 The Great Sun in the thick of the fighting. 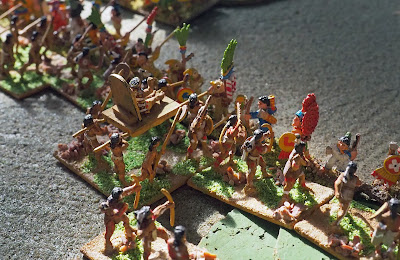 Aztec shock-troops tore through the Mound Builder nobles, punching a hole in their line. 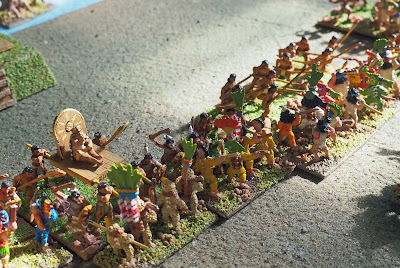 On the other flank though, Mound Builder warriors swarmed the Jaguar Knights and eliminated them. 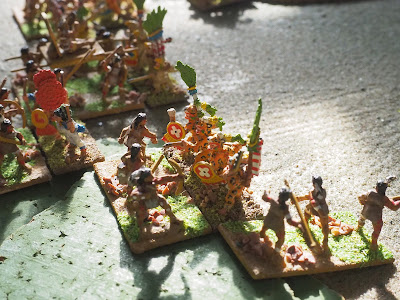 The Aztec general drove all before him, pushing back the Great Sun's flank supports. Eagle Knights attacked the Great Sun, but made no headway. Neither element would play any significant role in the battle. 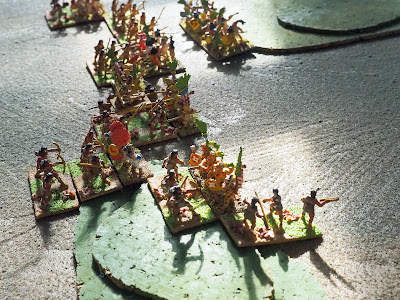 On the Aztec right their first wave of hordes was quickly defeated by the stinkards, who pushed forward against the second line of clan warriors. 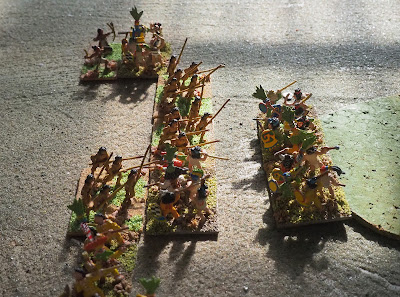 The shock troops attacked the Mound Builder camp. They would launch attack after attack, but failed to take it. 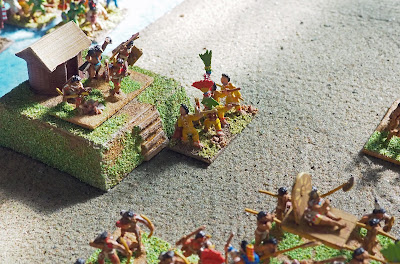 Both armies were broken up now. The Aztecs had a positional advantage however. 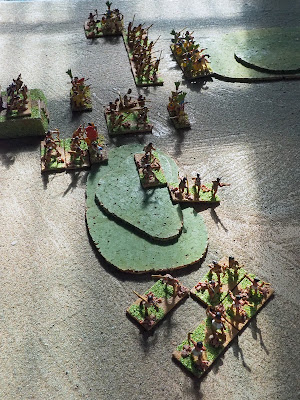 The Aztec general continued to drive back the Mound Builders opposing him. More archers rushed in to exploit his open flanks or rain missiles down on him, but he seemed invincible. 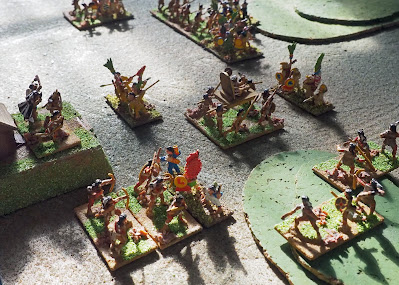 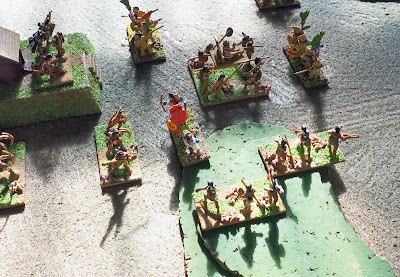 The shock troops failed to take the camp once again. 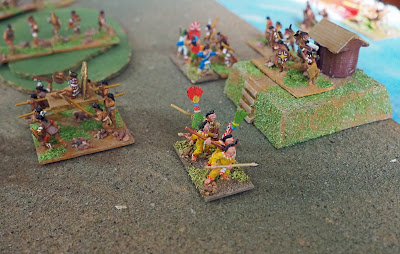 Hordes in both armies were starting to become thin on the ground, but the Aztecs had rallied and seemed to be winning the fight there. 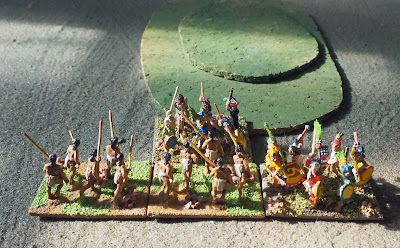 However the Mound Builders got their act together on their right, and wiped out the Aztec skirmishers in one bound. The Aztecs were only one element away from defeat, and had still only destroyed one element of Mound Builders (hordes don't count). 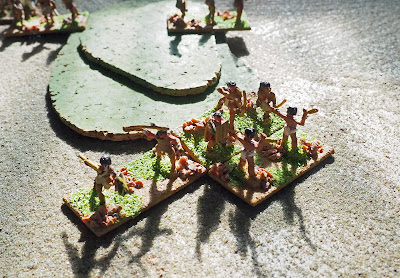 The Mound Builder skirmishers had held off attacking clan warriors for a while, but eventually fled before them. 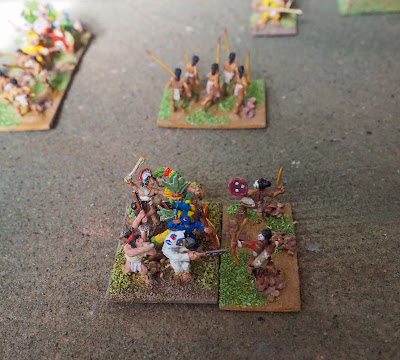 Meanwhile the Aztec general was pushing back the archers before him. One element was destroyed ... 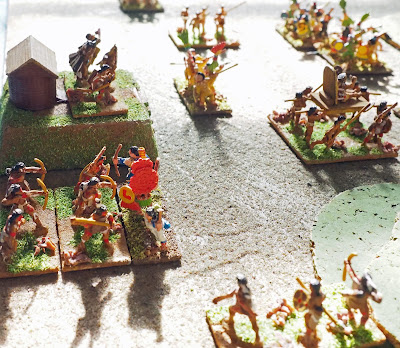 ... and the next recoiled off the board. This gave the Aztecs the win, 4 elements to 3. 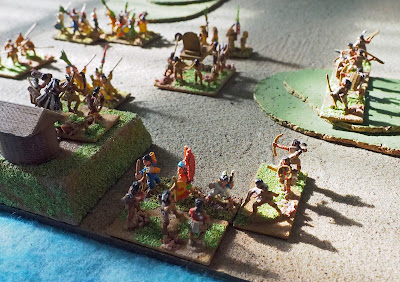 Mound Builders losses - one blade, two bow and a psiloi, plus two hordes. 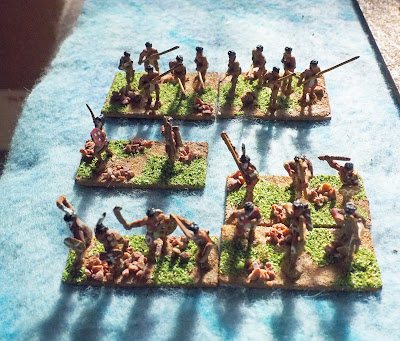 Aztec losses - one blade and two psiloi, plus three hordes. 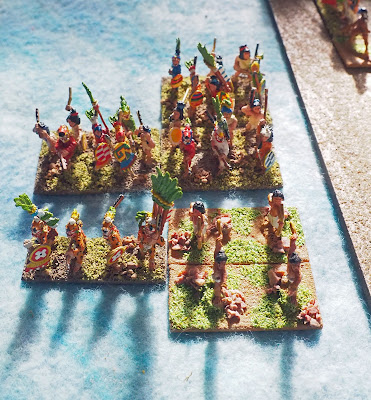 So both armies lost six of their twelve elements, but the majority of the Mound Builder losses were elements that count. 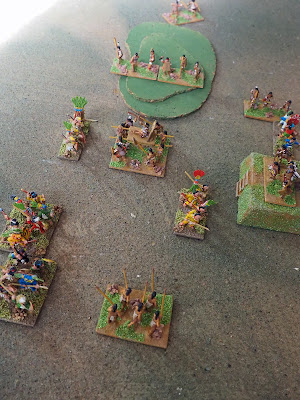 This is the fun part of horde-based armies in DBA; you can lose elements and still not lose the battle.
Posted by Kaptain Kobold at 13:18