I actually got in some face-to-face gaming outside the house this weekend.

A friend of mine is developing a boardgame, and invited us over for a test session. It's a high complexity cooperative game, where the players run the different departments of an island theme-park which offers its vistors ... cloned dinosaurs! 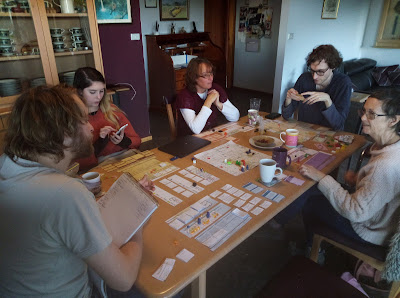 Essentially it involves attracting the right kinds of visitors, keeping them happy when they're there, keeping the park running smoothly, creating new exhibits via Science! and also obeying the curious whims of the parks corporate backers. 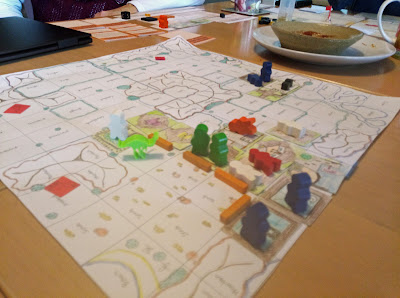 It's an involved game. Far more so than I prefer to play. But we had an enjoyable afternoon trying it out. We finished well before the end because we highlighted enough changes and potential issues that it wasn't worth continuing. It'll be interesting to see what the next iteration brings.

We finished the evening by playing Bärenpark, which is also about animal-related visitor attractions, but bears rather than dinosaurs. It also played a lot more quickly, albeit that it's a more abstract game.
Posted by Kaptain Kobold at 11:34