The new (to me) Palaeo Diet supplements I have include a number of new beast types. One of these is Great Bipeds, representing "large beasts that primarily move on two legs such as Homo rudolfensis or other heavy-boned primitive hominids, Gigantopithecus and lesser great apes." They could also represent yetis in pulp games. I decided I needed some, but lacked the figures. I know a few companies make apes that would be suitable for use with 15mm figures, but none of them had anything else I wanted to have delivered halfway around the world at this stage.

So I've improvised some. I may not have any great apes, but I was gifted a pile of plastic Warhammer stuff a few years ago, and in the random pile of figures were some plastic Snotlings.

They're now Great Bipeds. They're not perfect, and one day I will go down the proper gorilla/ape route, but they'll do for now. 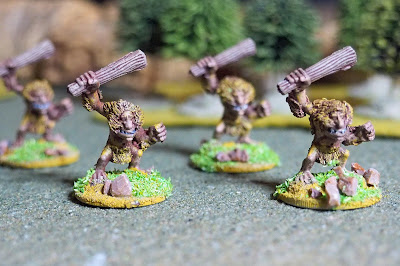 I did think of removing the clubs, so they just had raised fists, but I didn't think the hands would look right. I may yet remove them and dril the hands to take some trigs so they look more like they're wielding branches. 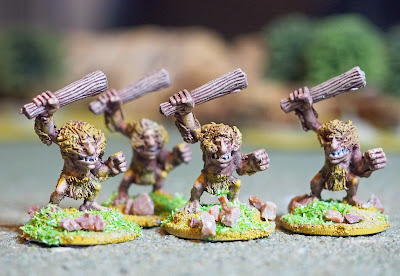 Anyway, I carved up the plastic loincloths to look like fur, then added milliput hair to make them look more ape-like. 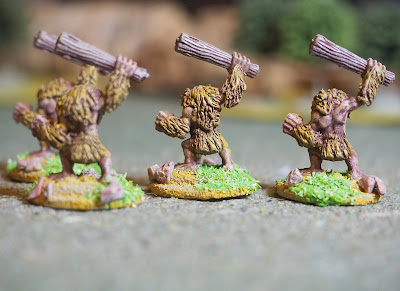 Here they are intimidating some close relatives. 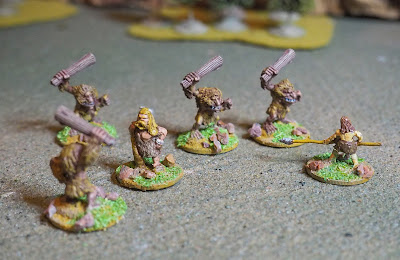