The first in an occasional series in which I will feature some of my HOTT armies or matched pairs.

(Strictly not the first, as I have already featured some armies. This is the first time I'm doing it 'officially'. You can read about my armies for 'Walker' HERE and Barsoom HERE)

Those that know me will know that, when it comes to HOTT, I'm a committed 15mm man. In any competitions or tournaments I played when I lived in the UK I used 15mm armies, borrowing larger scale ones if I needed to.

Moving to Australia was a bit of a shock, as the only local HOTT tournament, at MOAB, is firmly set as a 25/28mm tournament. If I was to take part, and there was no way I wan't going to, I would either have to borrow an army or bite the bullet and make one of my own.

I opted for the latter.

Many years ago I had, in a fit of insanity, purchased some 25mm sci-fi figures from GZG. These were the Spice Marines, based on a popular all-girl group of the day that you may have heard of, and some of their Mobile Suit Girls, which are anime-style women in power-armour. I decided to use these as the basis of my first 25mm HOTT army, using the Epic 40K Sisters Of Battle army I had made for HOTT as a guide.

And thus was born the Sororitas Puella Armatura Mobilis, or Sisterhood Of Mobile-Suit Girls.

Limited by the figures I had, it's a simple list:

Aside from having an anime Sisters Of Battle vibe, the army has a secondary theme, one of personal importance to me. All of the Hero characters are named for members of the worldwide transgender community - some wargamers, some not, some transsexual, some crossdressers - all of whom have been good friends to me in my personal journey over the last five years or so. The army is, in its way, a tribute to those people and a way of saying thank you. Saint Rachel is a conceit; she is my personal figure, although the real Rachel doesn't go armed, has red hair (mostly) and wears a different kind of armour. The standard is a combination of the Transgender Pride flag and a suitable transgender symbol.

Anyway, here they are. Click on any picture to make it bigger.

First up, the Hero general's element - Sisters Elaine and Pandora: 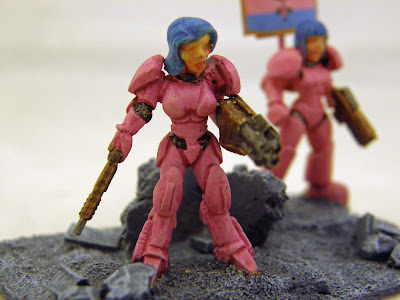 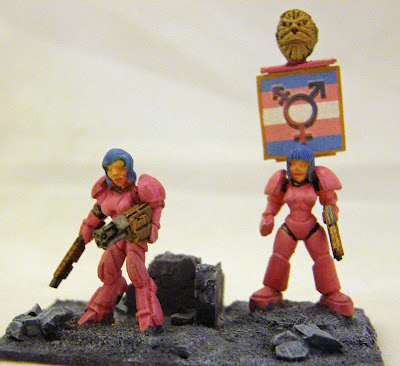 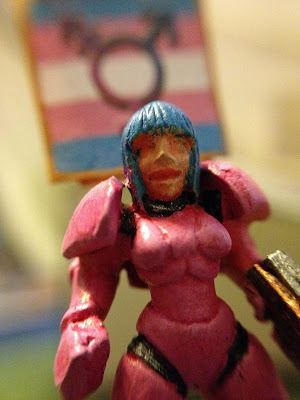 The face at the top is a 10mm shield from Pendraken. The rest of the back-banner is scratchbuilt: 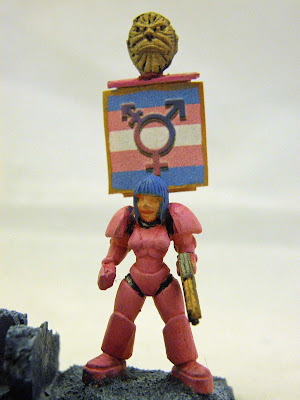 Sister Elaine is in charge. She has a big gun. It really is a big gun; she's not just pleased to see you: 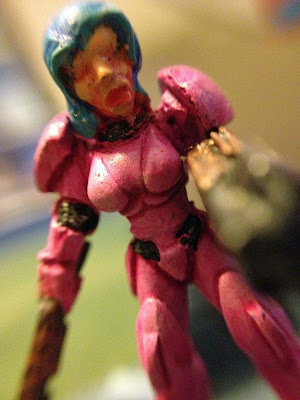 The other Hero element consists of Sisters Letitia and Kirstie: 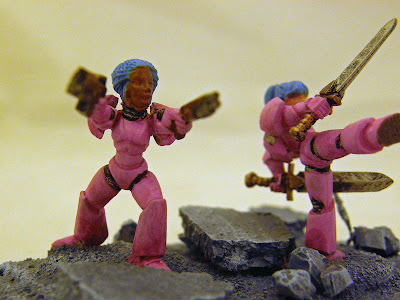 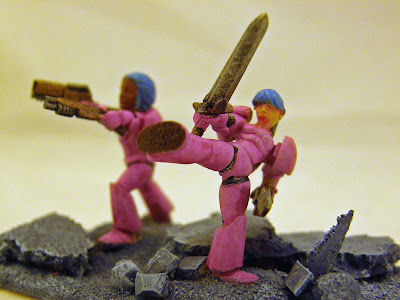 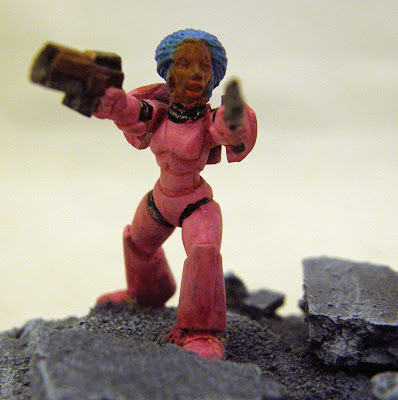 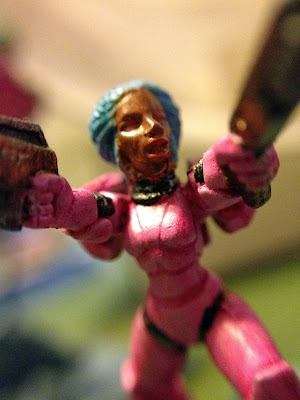 Cross her, and this is probably the last thing you will see: 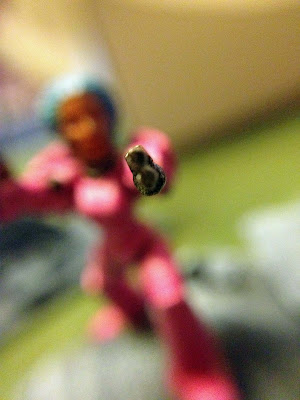 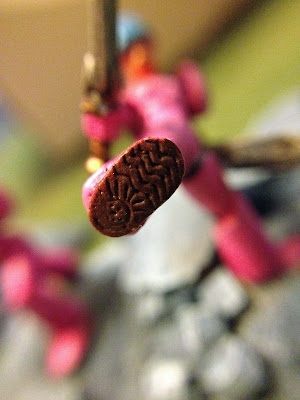 Together they are pretty potent: 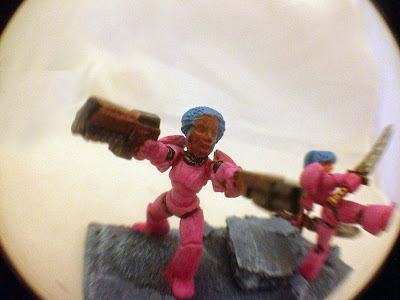 Saint Rachel is the army's Paladin. Her cloak is from a Grenadier superhero figure: 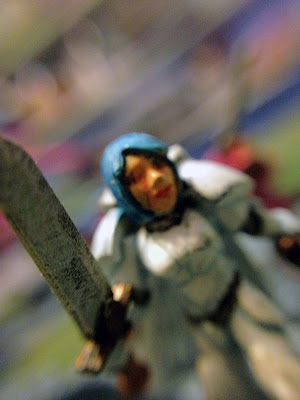 Guns are not her style; we all know that guns are really a mechanism for compensating for deficiencies elsewhere ... 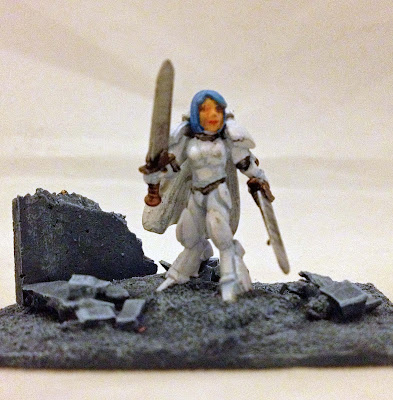 Mind you, those hefty great swords are probably grist to the psychological mill as well. 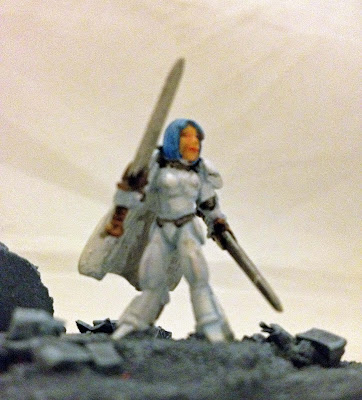 All of the character figures aside from sister Elaine are from GZG's Spice Marine pack; you should be able to recognise the individual girls if your're that way inclined. Sister Elaine is the top half of a Spice Marine on the bottom half of an aerial Mobile Suit Girl; I think at one stage I was going to have an Aerial Hero in the army.

Most of the other Sisters are Warband - they have a mixture of guns and swords: 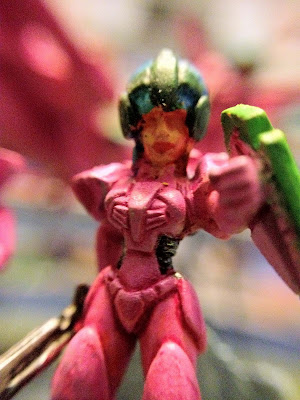 Ah, so that's where Sister Elaine's original legs went to ... 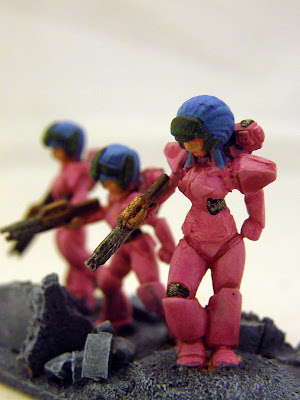 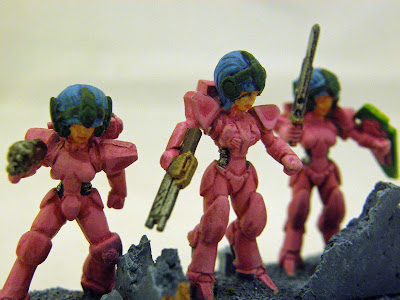 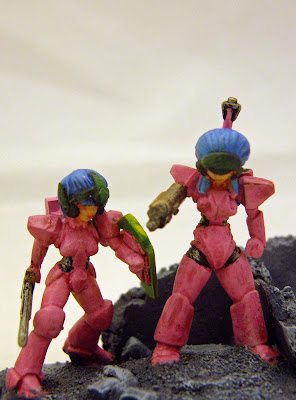 The base armour colour is a hot pink, with a darker pink/red wash over the top. I did look at putting more areas of colour on, to show ranks and just add variety, but found that the army looked better with the uniform pink. the blue hair just seemed to go with it. 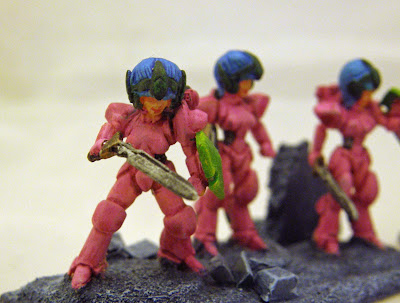 The shields are GW Scorpion Green, with a yellow highlight. They glow nicely. 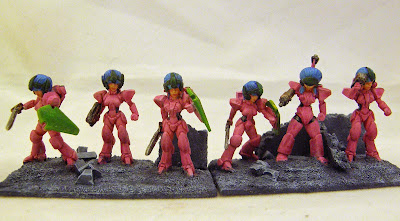 The bases are mounting board covered in a mixture of PVA glue and fine sand. The smaller pieces of rubble are clipped plastic sprue, whilst the larger pieces, and the walls, are broken off pieces of cork tile. The whole lot was painted dark grey, and then dry-brushed in a lighter grey: 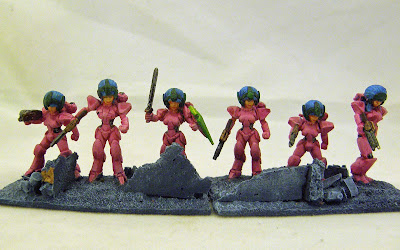 Some Sisters take to the air thanks to the magic of jetpacks or anti-gravity or ... pieces of wire: 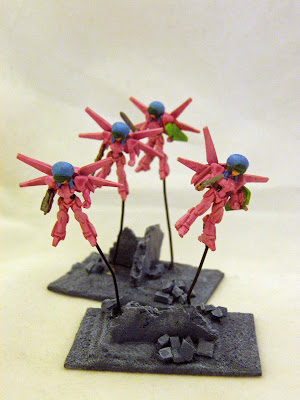 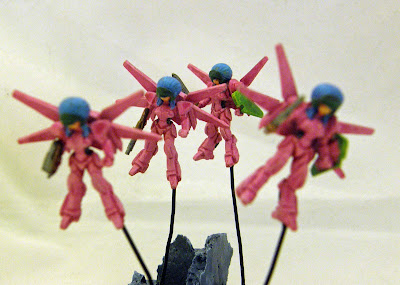 And here they all are: 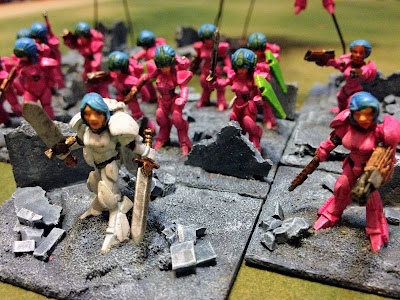 Here is their stronghold - the dropship 'Priscilla'. This is a Star Wars plastic toy I picked up at a charity shop, repainted to match the rest of the army. 'Priscilla' is sabot-based; she can act not only as a stronghold but, if you take her off the main base, as a legal HOTT Airboat element. However since I don't have anything else to cover the 1AP she leaves hanging around, I haven't used her in that role yet: 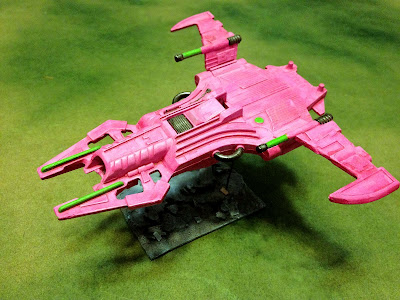 And here's the whole army with 'Priscilla': 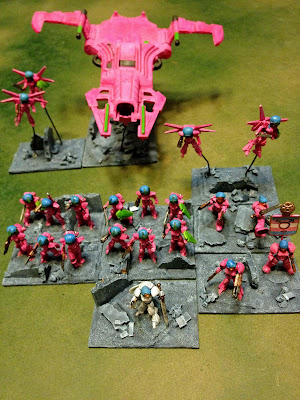 This is a fast army, but it suffers from being small; it's easily outflanked and can't take too many casualties. As such its optimal strategy is to win fast with a surgical strike at either the enemy general or their stronghold. The two Heroes and the Paladin are good for this, able to blast through the enemy centre. The Warband provide flank support, whilst the Flyers can be used to pin enemy reserves or provide an extra overlap in a critical combat. It suffers if caught in a sustained fight, however.