I used my first, and at that stage only, 25mm HOTT army, the Sororitas Puella Armatura Mobilis, at MOAB 2009. Where I come from it's considered good form to always bring a new army to each tournament, so I thought I ought to come up with another 25mm army for MOAB 2010. I opted for some of the lovely Mantic Elves and had the army box for my birthday that year, reasoning that I could make enough elements to cover over 24AP and allow myself some choice in army composition.

The problem was that they are such lovely figures that I didn't know where to start with painting them. I wanted to do them justice and was afraid to put brush to plastic.

So they sat on their sprues, unpainted, and when MOAB 2010 came around I had to resort to the Sisters again. I won (picking up another Mantic army box - Dwarves, this time).

In early 2011 I bit the bullet, and assembled my Elves, working out what elements I was going to make and doing the necessary conversions.

Assembled they looked even better than they had done on the sprues, and once again I was paralysed into inactivity.

By August 2011 I hadn't done any more than undercoat them, and there was only about four weeks left until the tournament. So I finally overcame my reluctance, and got on with them. Rather than try and paint the whole 40 or so AP of troops I had available, I worked out what list I wanted to use, and just did those.

Still unpainted I have an element each of Artillery and Beasts, another Hero, another Magician, some Lurkers, more Shooters and even five of the metal cavalry figures. 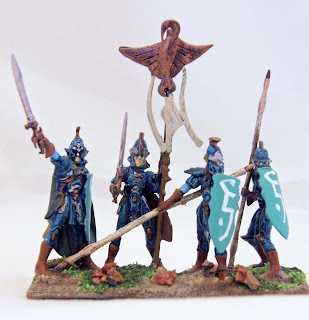 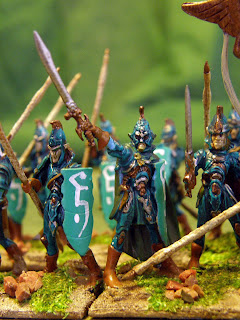 And here he is with the rest of the Spears. There are no conversions here; all of the poses were set up using the options offered on the sprues: 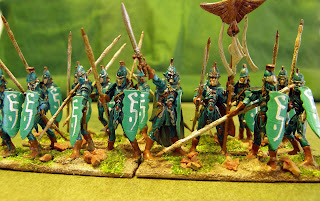 It took some work to pose them so that the narrow HOTT elements didn't cause too much 'interference' between the spears. I also opted not to use the 20mm square bases Mantic provide for the figures, as this allowed me to fit four figures on a 60mm frontage rather than three: 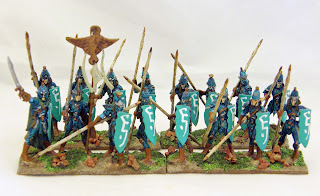 The armour was painted in a turquoise colour, with a darker green/blue wash. I then picked out random decoration in metallic colours. 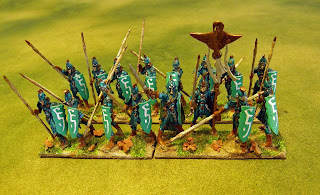 The Shooters. For the archers Mantic mostly use the same body poses as for the spear-armed Elves, which explains why so many of them are just carrying their bows rather than using them: 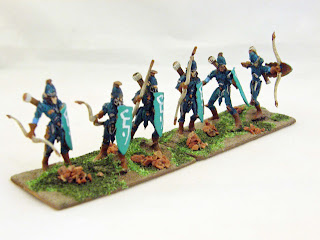 The Warband. These were made from some of the ten scout figures Mantic provide in the army box. I took spare arms and shields from the archers and spears as well: 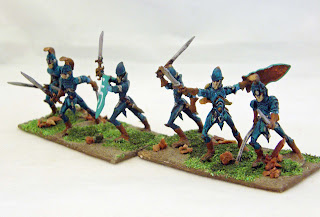 The Magician. The standard-bearer helps fill up the base, and also gives me the option to make her the general as well: 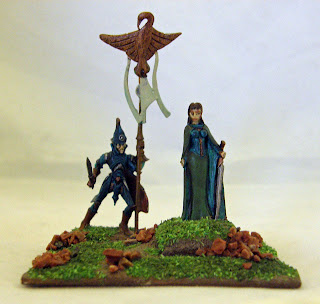 This is the one non-Mantic figure I have in the army. In fact I have no idea where she comes from; it was an unpainted metal miniature I picked up on a bring-and-buy, but her build fits perfectly with the slender plastic figures: 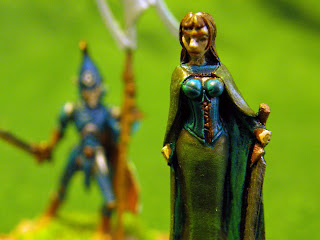 The Hero. I love the double-bladed weapon he is armed with, and his bald-headed companion looks quite sinister, adding to the idea that these aren't necessarily your normal friendly Elves: 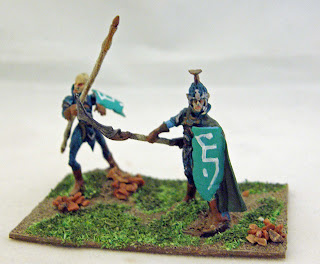 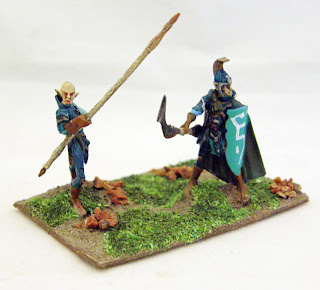 The stronghold comes from that source of all good strongholds - the aquarium shop. Yes, it's a fish-tank ornament. It was wide, but lacked depth, so I added a base, which also allowed me to include a lake for the waterfall to empty into (I also extended the river a little way out at the back as well, for appearances sake, although you can't really see it). I did very little actual painting on the model itself, opting instead to match the base and bits I'd added to the colour scheme the Chinese factory had given it. 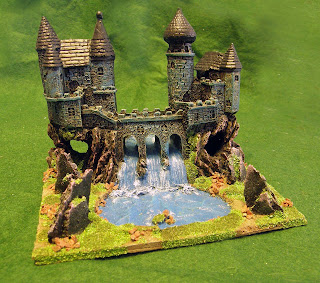 They are not a fast army, but the Hero and Warband provide a decent striking-force, whilst the Spears and Magician provide a solid centre. The Shooters cover the flanks and, with the Magician, protect the army from enemy aerials.

Finally, a few arty shots from my phone: 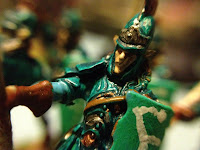 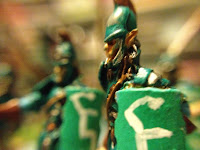 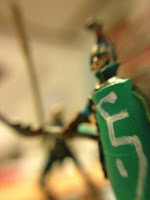 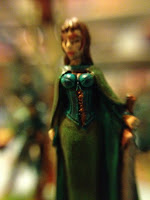 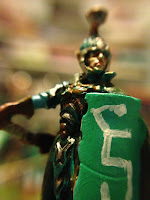 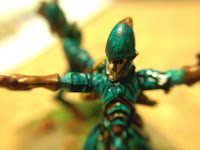 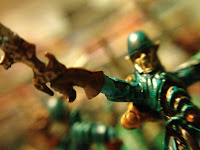