It's not generally known that, in the 1850's, after taking over Nicaragua and establishing himself as President, filibuster William Walker led his forces down a rabbit-hole and imposed himself as the ruler of Wonderland too. 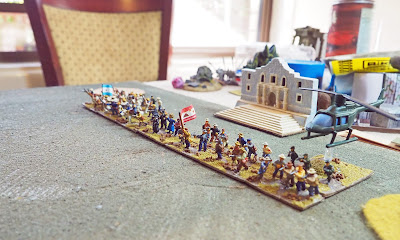 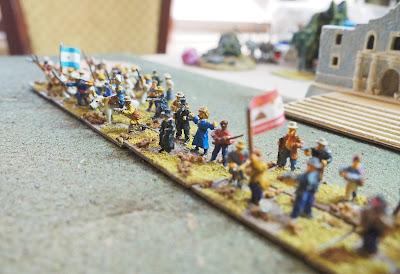 Of course the locals were unimpressed by this outrageous imposition, and the true Queen (of Hearts, naturally) led a force of rebels against Walker's forces, aided by an extremely large little girl who had also gone down a rabbit-hole.

So the stage was set for this week's HOTT game. William Walker's filibusters (based on Alex Cox's film from the 1980s, hence the rather eclectic elements) defended against an attack by the forces of Wonderland. Both armies are covered in an Army Showcase: Walker HERE and Wonderland HERE.

(I chose this week to get out Wonderland because May 4th was Alice Liddell's birthday and, apparently, the story is also set on that date.)

Walker's Immortals formed the centre, facing the Queen of Hearts, Alice and some unusual creatures. Meanwhile his Nicaraguan allies were opposed by Wonderland's fearsome playing-card soldiers. 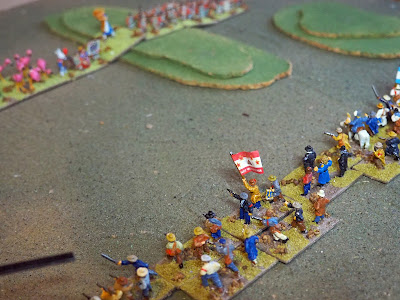 As the armies advanced towards each other, US marines launched an airborne assault on Wonderland's right flank. The gryphon and mock-turtle fled in panic. 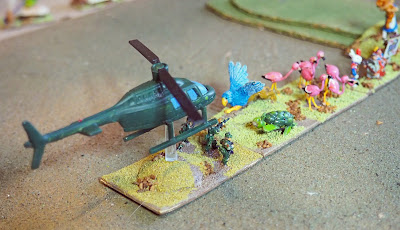 The Nicaraguans prepared to receive the Wonderland assault, whilst Doubleday recorded it on canvas. 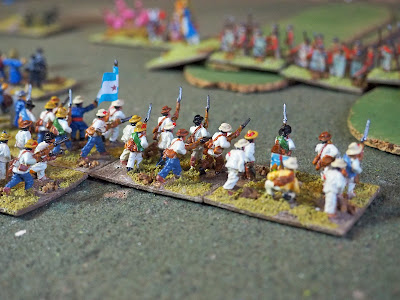 The airborne assault had broken up Wonderland's attack, but they pressed on regardless. Walker advanced his Immortals to receive them. 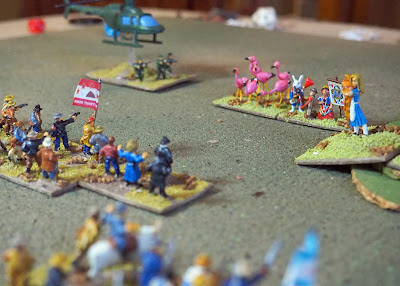 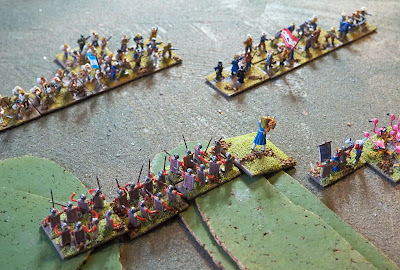 The Marines made heavy weather against their next target - flamingos. Indeed they were driven back a couple of times. 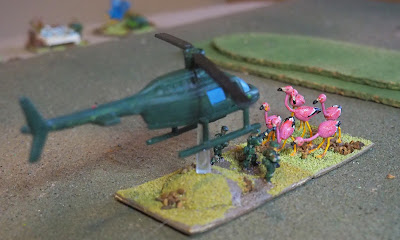 Walker dispatched some Immortals to assist the Marines. 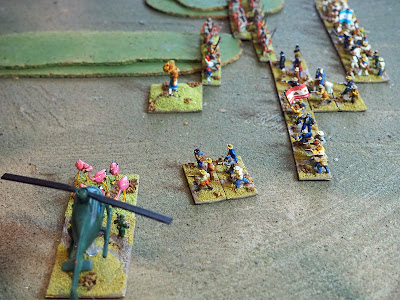 But battle was being joined all along the line. Wonderland started with an attack by their soldiers on the Nicaraguans ... 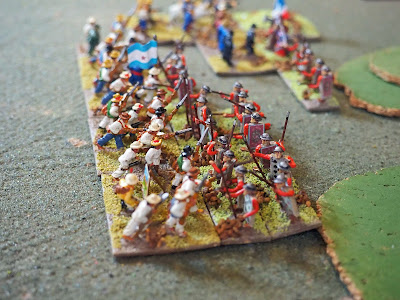 ... whilst the Queen of Hearts and Alice attacked Walker's centre. 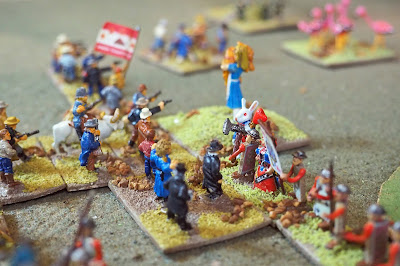 The Nicaraguans fell back in good order, whilst Wonderland's attack in the centre was repulsed. 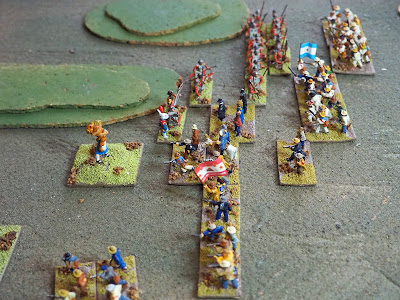 The Immortals moved to surround Alice, and brought her down. Oh no! 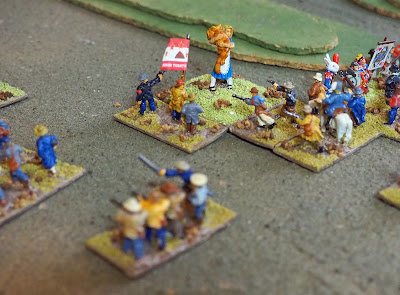 This left the Queen of Hearts very exposed indeed. 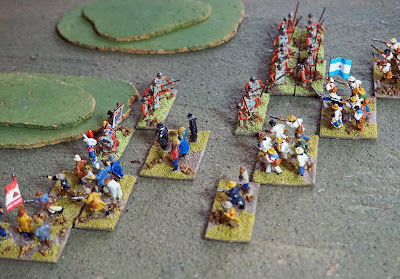 Assisted by the Immortals, the Marines dealt with the flamingos. 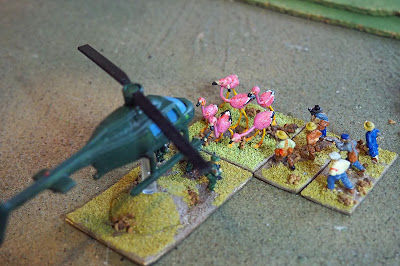 The Queen of Hearts attacked Walker himself, but she was driven back. 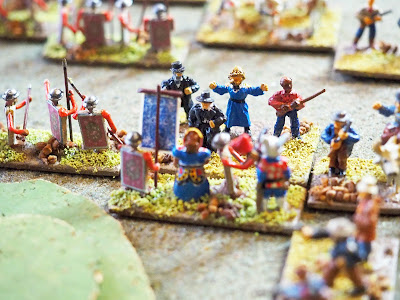 Some of the playing-cards swung round to support their Queen, threatening Walker's flank. 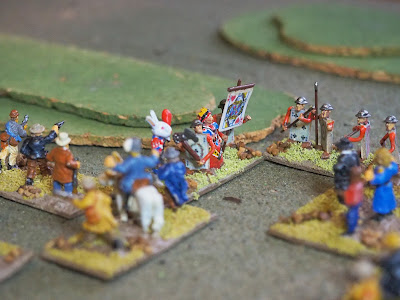 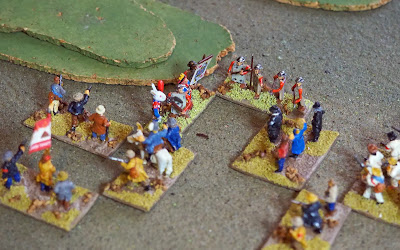 Walker responded by ordering a massed attack on the Queen and her bodyguard. It was led by Baron Bruno von Natzmer. Riding a cow.

She drove him back. 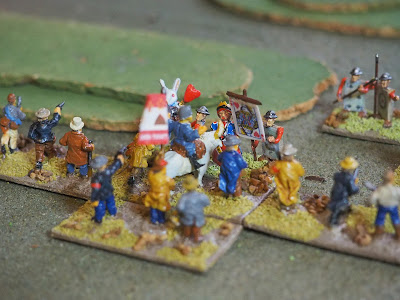 On Wonderland's left they had drive off the Nicaraguans, and were advancing on Walker's stronghold, but more Nicaraguan allies appeared to block them. 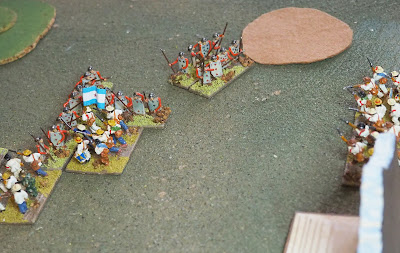 And the inevitable end came in the centre, as the Baron rode down the Queen. 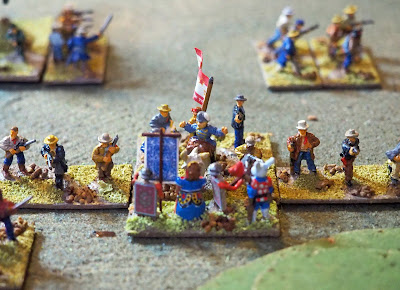 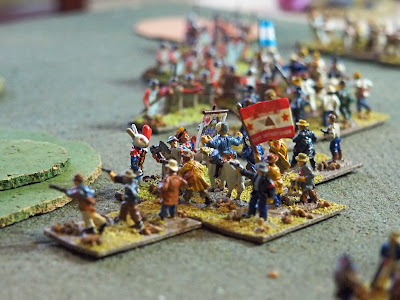 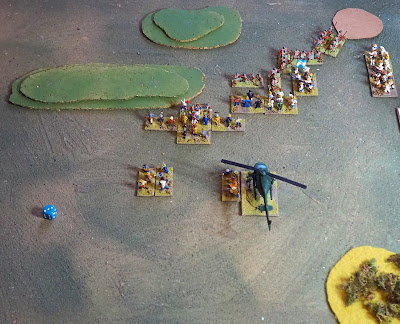 Wonderland had lost 10AP and their general. Walker lost two hordes, but brought them both back.

Wonderland had a difficult job, matching an army that's 50% spears and has no anti-aerial capability against an army that's 50% warband and which has an airboat. Attacking beasts with the airboat wasn't actually a great move, as the beasts have better factors and can maintain contact when they win. If that first combat against the gryphon had gone the other way, then it would have secured Wonderland's flank for a turn or two, and maybe given them more of an edge in the centre. Alice was taken down with seeming ease, but it was done with warband, so a lost combat by Walker's army would have seen one or two elements lost, and a pursuing behemoth in his rear.

So whilst Walker had the edge throughout the game, a couple of combats going the wrong way could have seen a very different result.

I remembered that in my photo archive I had these pictures - Alice Liddell's grave in the New Forest village of Lyndhurst. She died in 1934. They were taken in 2008, on one of our last weekends away before we emigrated. As you can see, it rained. 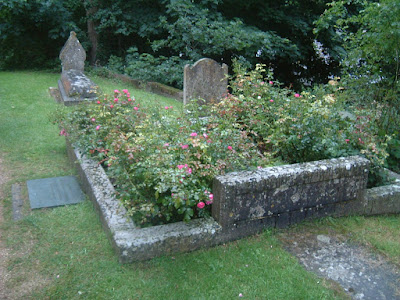 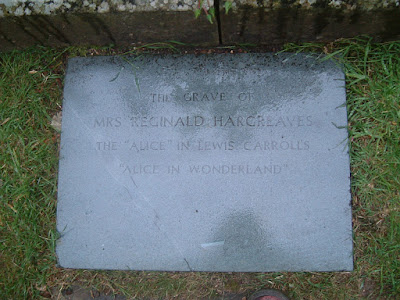