The Clan of the Wolverine

For our regular Thursday evening game this week, Catherine chose Paleo Diet, so we set up the Clan of the Cave Bear scenario from the book, which is confrontational rather than cooperative. In lieu of the cave bear we used a giant wolverine.

Catherine had three hunters from the Wolverine Clan. I had five Strangers. The Strangers were aiming to kill the wolverine. 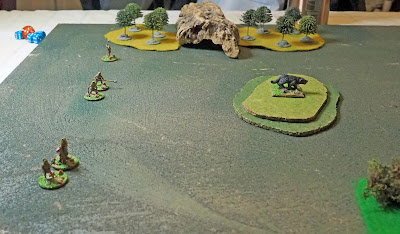 Catherine's three hunters had to kill all five Strangers, but could try and use the wolverine to do some of their work for them. 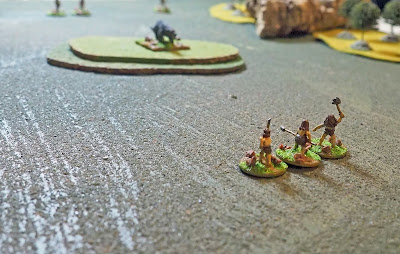 I adopted a plan. My two club-armed hunters would move around one flank to engage the opposing hunters and keep them occupied. In the centre my two spear-armed hunters went into ambush, whilst my lone slinger moved to pepper the wolverine with stones and draw it towards the ambush. 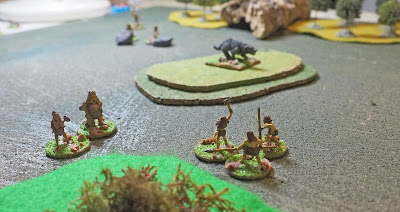 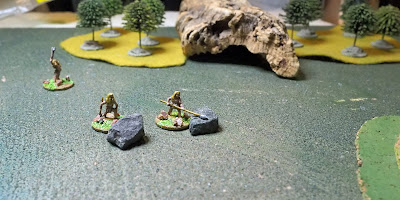 The plan went tits up almost immediately. The Clan attacked the strangers, and their lead hunter was wounded, which attracted the wolverine. 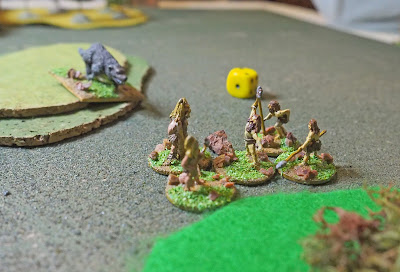 It growled and roared, and the hunters fell back. 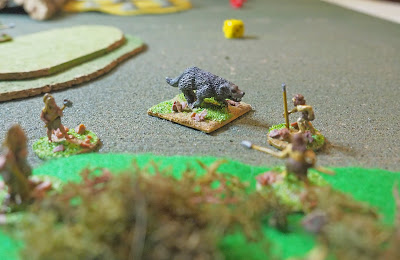 One of the Clan hunters crashing through some undergrowth really upset it; it charged and tore the already wounded man to pieces. 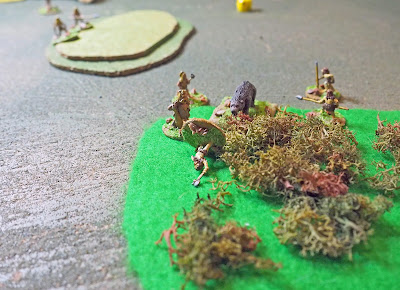 This brought it into range of one of my clubmen, who inflicted the first wound on it. 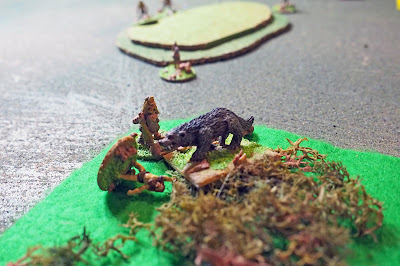 Elsewhere a Clan hunter attacked the hapless slinger who, in advancing around the hill, and blundered several times, keeping the wolverine in a constant state of annoyance, and making it a very unpredictable target. 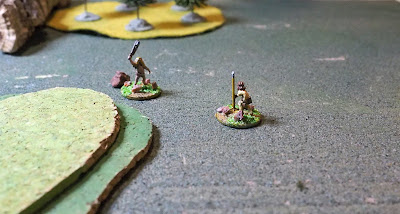 The slinger was wounded, and the wolverine moved away from its fresh kill to investigate ... 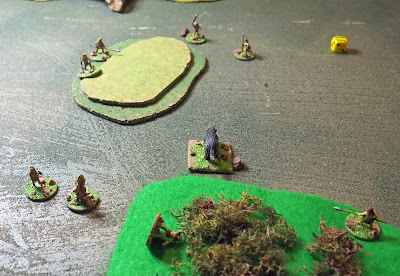 ... only to swing back when it saw the Strangers advancing on it from behind. Their lead hunter struck another wounding blow on the beast; one more would kill it ... 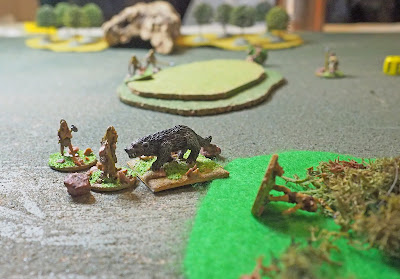 ... but he took a savage clawing in return. Unfortunately the wolverine then proceeded to roll some appalling combat dice and just couldn't finish off the injured hunter.

In the distance the slinger was killed by a member of the Clan. No-one would miss him. 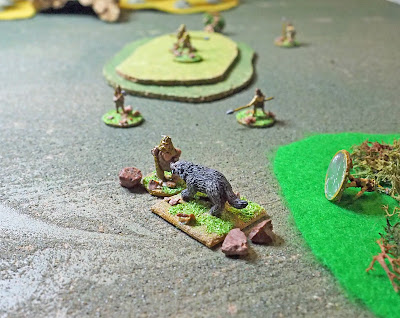 The second clubman closed in, but also couldn't inflict the killing blow. 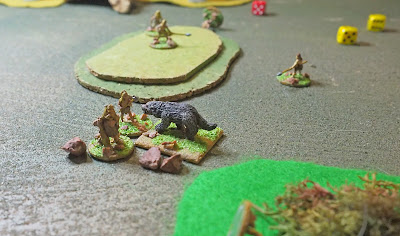 The Strangers with spears advanced off the hill and engaged one of the Clan, wounding him and, once again, attracting the wolverine. 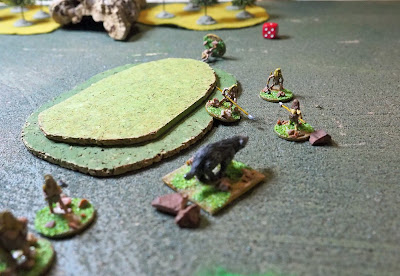 Things then happened very quickly. The Clan spearman took down one of the Strangers, thoroughly arousing the wolverine. As it lunged past him, the other Stranger threw a spear, which missed, but caused the wolverine to turn on him. A second spear failed to finish the animal, who returned the favour by savagig the Stranger. 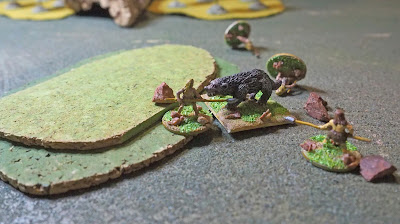 So I was now down to my last two hunters, both armed with clubs. The wolverine only had one wound left. A blunder by my wounded hunter saw the wolverine charge towards him. But before it could reach him, the other clubman stepped forward and this time his mighty blow shattered the animal's skull for the kill. 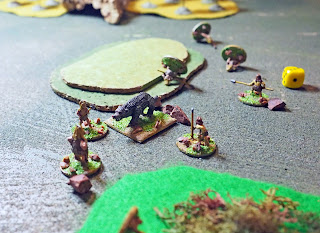 So the Strangers had won, killing the sacred beast of the Clan. They'd lost three hunters out of action, and one wounded, so the Clan came close to a win. The Clan lost one hunter and a second wounded.

Early on this looked like an easy win for the Strangers, but the wolverine's propensity to roar when reacting kept seeing my club-armed hunters forced to back away, limiting their attacks. My hunters with ranged attacks never really got involved in the hunt, being tied down by the Clan. This is one to play again, as the Clan's strategy is actually quite interesting; their best weapon is the predator, as it really does even the odds against them but, of course, the predator is also the objective, so they have to be careful about driving it at the Strangers too aggressively. Wounding Strangers and then using the wolverine to finish them off before they get an attack against it would seem one way to go.

Anyway, it was a lot of fun, and it was also nice to win against Catherine for once.
Posted by Kaptain Kobold at 22:31