I played a quick six units per side ECW Portable Wargame action this evening. Victory was about breaking the other army, but control of four on-table objectives - the village, the large wood and the two hills - made this easier or harder to do. The Royalists (top) had control of the village and one hill, whilst Parliament had only a single hill. The large wood remained uncontrolled. I decided that for each objective controlled the side would get a +1 on its morale roll (with a 1 still being an automatic failure). 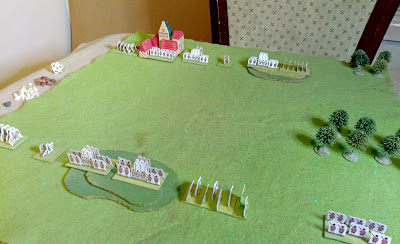 The battle opened with a cavalry skirmish on Parliament's left. This ended with both sides taking hits, the Royalist commander being seriously wounded and the horse parting and returning to their baselines. 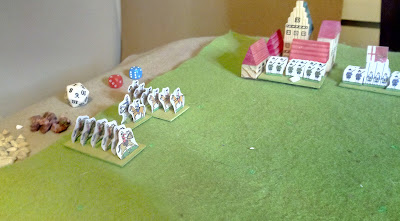 Parliament needed to take the wood in order to balance up the held objectives, so rushed some shot into the trees, and the rest of their foot forward in support. The Royalists advanced to oppose them. 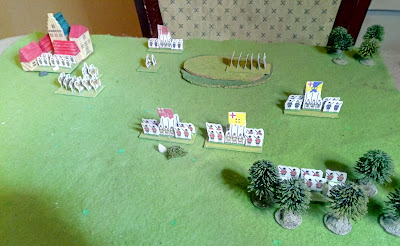 Royalist horse rushed across the front of the village to hit Parliament in the flank. 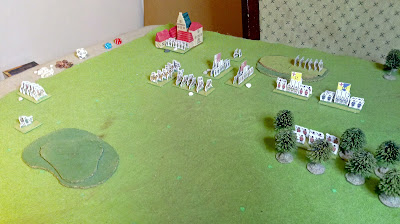 A confused melee broke out. 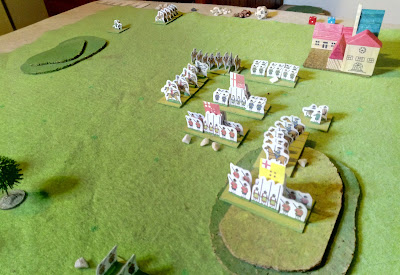 Parliament got the worst of it, but the Royalist horse was denied a killing blow when it rode away from the main fight in pursuit of fleeing Parliamentarians (actually a random event allowing Parliament to move a Royalist unit). 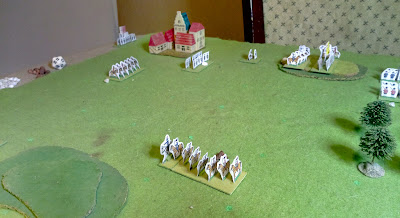 Despite controlling three objectives (the wood and both hills) Parliament's battered morale broke first, leaving the Royalists the victors. 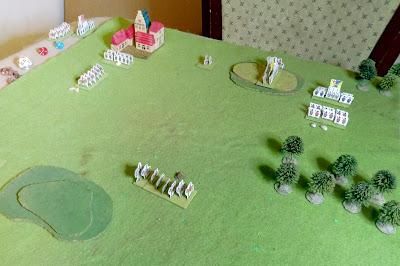 Again this game saw several random events. The Royalist horse which raced off on its own path away from the fight also had a one-time combat bonus stored up, which it had been denied using a turn earlier after the unit's commander became confused and left the unit milling around with no orders. In addition both sides had units that suffered crises of confidence, and lost a strength point.

I probably need to come up with a better way of controlling the way objectives interact with the Break Point. And I think the game would have run better with eight units a side, rather than six.
Posted by Kaptain Kobold at 21:31