The Action At Midsomer Mere

The Civil War has flared up in the county of Midsomer again, and Lord Standing's Royalist forces are attempting to march on Causton. Sir Henry Nelson has been sent with a small force to delay them, and making use of local knowledge chooses to do so at the critical choke-point at Midsomer Mere. This consists of a causeway over boggy ground - impassable to the east, but with paths known to the locals in the wooded areas to the west. His force consists of two units of horse, a unit of pike and shot and some local dragoons who know the paths through the woods.

Lord Standing has a larger force with which to break through the Parliamentarian blockade; two units of pike and shot, one of commanded shot, two of horse and some artillery. 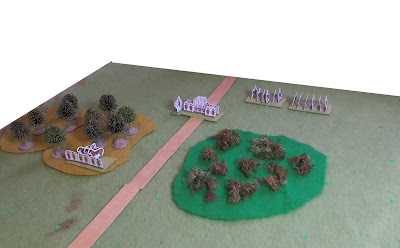 This is the 'Bottleneck' scenario from 'One Hour Wargames', adapted for the ECW Portable Wargame. Parliament start on-table, and must end the 15 turn game with at least one unit in an open square on, or adjacent to, the road. The dark green bog is impassable to all units, whilst only the Parliamentarian dragoons can move through the woods.

The Royalist advance guard arrived - two horse moved round to the west in order to flank Sir Henry's position, whilst the shot closed up to engage the dragoons in the wood. Sir Henry opted for a forward defence, bringing his horse wide out on his left. 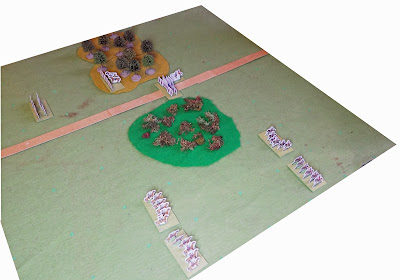 The shot moved into action. 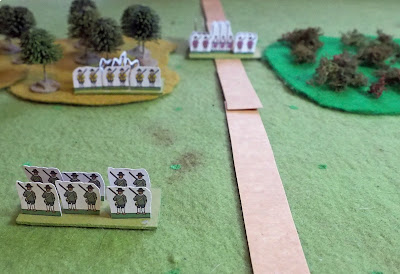 The first cavalry charges saw little in the way of casualties, but the Parliamentarian horse did fall back. 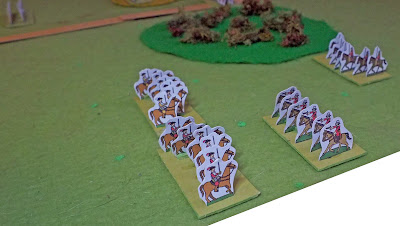 The remainder of the Royalist foot arrived as the Parliamentarians peppered them with musketry. 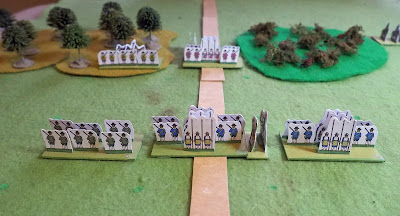 Lord Standing led his foot in an attack down the road, but was stunned by a musket-ball, and carried from the field. Command devolved to his Colonel of Horse, Sir Lawrence Lamb. Of curse as the Royalists pushed down the causeway they lost the support of friendly units to the flank. 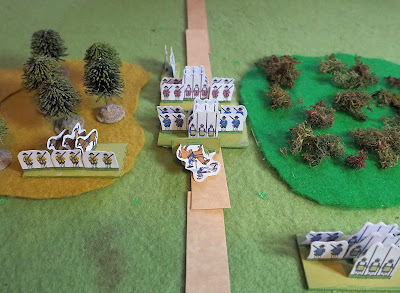 Fierce fighting along the line. 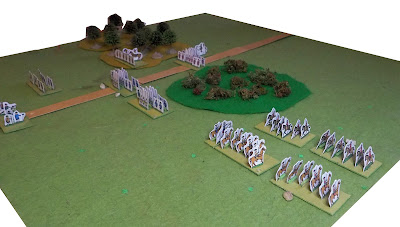 Sir Henry's horse had taken some hits, and taking advantage of some hesitation on the part of the Royalist forces, fell back towards the road. 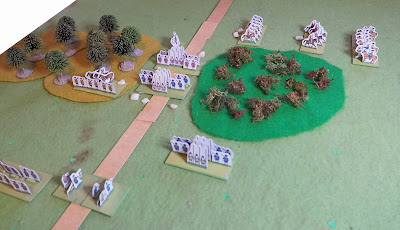 The local dragoons saw this retreat as a general one, and slipped out of the woods, ready to head home, but Sir Henry persuaded them of the error of their ways, and they returned to the action. 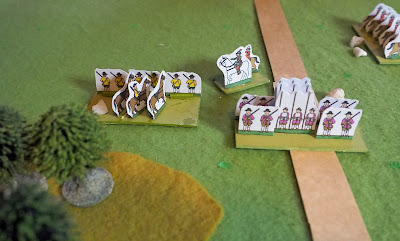 Sir Lawrence, keen to impress his Royalist superiors, led his horse in a series of fierce attacks against the enemy, shattering them. 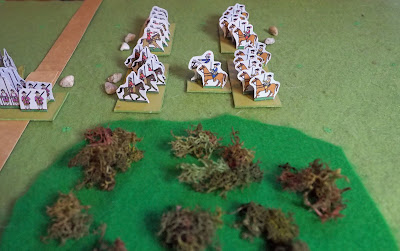 In the centre the Royalist foot broke under fire from its front and from the woods to its left, although their artillery was in action, pounding the Parliamentarian foot. 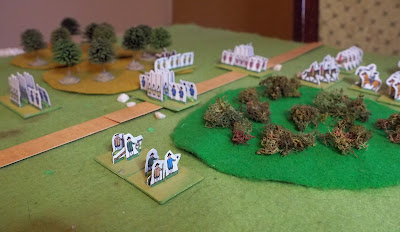 Parliament's position still looked strong, and the day was drawing on, but accumulated casualties were beginning to tell, and the force's morale was wavering. 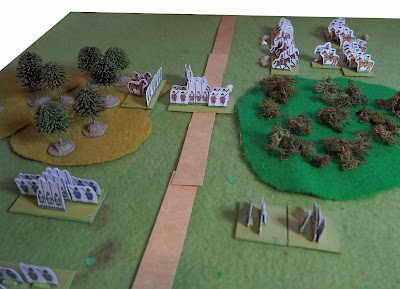 However Sir Henry was ever one for bold action, and sensing that his Royalist opponents were close to having had enough of the fight, ordered his foot into a daring charge down the road, which overwhelmed the Royalist guns. 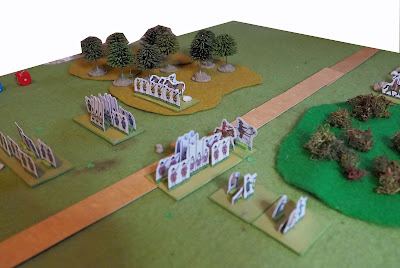 The Parliamentarian horse made one last attack, with some initial success, but were driven back by a desperate counter-charge. 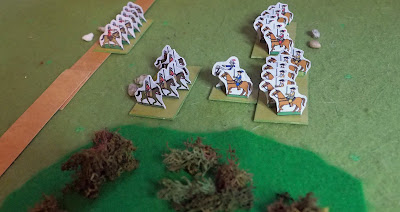 And that was enough; Sir Henry's troops melted off into the sunset. It was late in the day, but for the Royalists the road to Causton was clear. 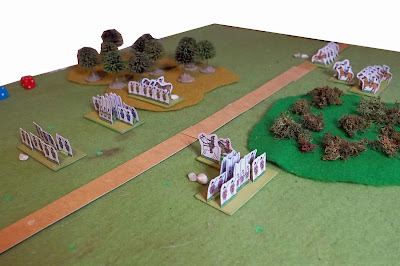 So a narrow Royalist win with only a couple of turns to go. I gave the Parliamentarians a bonus on their morale roll if they had units in a position to prevent a Royalist win, and they survived at least one morale roll on that basis. But eventually the odds caught up with them.

This game saw loads of random events (caused by a double on the initiative die-roll). Key events included the Parliamentarian dragoons retreating from the woods (fortunately they got initiative straight away and moved back into position), the Royalist horse getting a combat bonus (which gave the edge in their vital charge towards the end of the battle), whilst some Parliamentarian horse took a hit, and a Royalist foot unit rallying two hits early on (which kept them in the fight for a few turns before they eventually broke, but which probably prevented a Royalist morale collapse at the end). So hooray for random events.

Anyway, this was a lot of fun for a game I set up on the fly because I didn't like to see a late Sunday afternoon go to waste.