An Evening in the Spice Islands

1610. The East Indies. It's a Thursday. And here's an enterprising flotilla of Portuguese carracks. 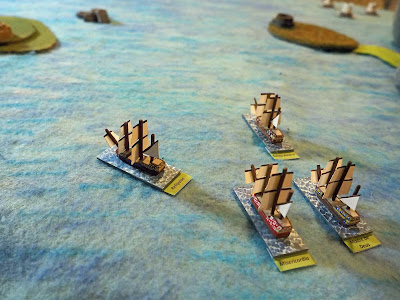 And here's another flotilla, this one of interloping Dutch merchant venturers in cromsters. 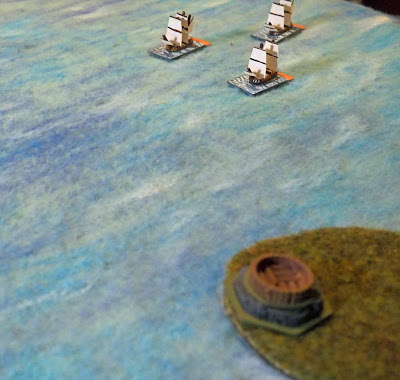 And here are three islands, each with a port offering fabulous wealth for those willing to risk the possibility of an unfriendly potentate or some nasty tropical diseases. 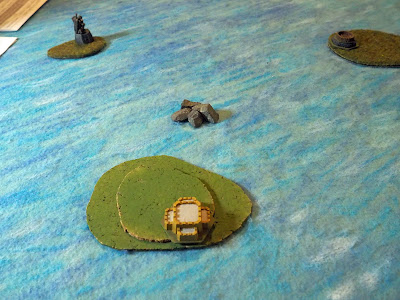 Catherine and I played Galleys and Galleons again, running a variant of the Treasure Island scenario from the rules.  In the scenario as written a ship can only send a landing party to an island if it is within short, but that also puts it in the shallows. So either every ship needs to have a shallow draft, or you have to risk running aground in order to achieve the scenario objectives. I this version the port acts as a jetty in Fair Winds and Foul Tides, allowing ships of all drafts to approach. Instead of having to be within short of the island to test for what you get, you must be within medium of the port.

The ships were lifted straight from the rules - carracks for the Portuguese and cromsters for the Dutch. The Portuguese had more ships, and they are tough, but also slow and not easy to maneuver. The Dutch only had three ships, but they are nippy and can sail close to land.

Basically ships had to approach a port and spend actions to send in a delegation. on a 1-2 something bad happens to it (and the ship). On a 3-4 they achieve nothing. On a 5-6 they acquire treasure. Each side only gets to roll for each port once.

The Santa Amaro sailed up to a port and got a pile of spices - first treasure to the Portuguese. 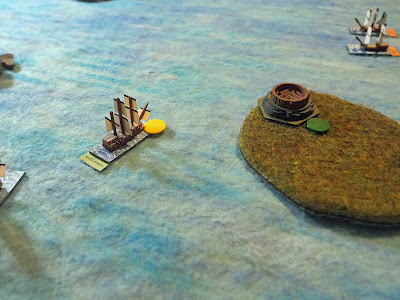 The Reliquias approached a second port, but weren't able to secure anything except a nasty disease which severely hampered the crew (reducing its quality for the rest of the game).

Once a side gets a treasure the game is played to a six-turn limit, with sides scoring big points for holding on to, or capturing, treasures and a few points for sinking or capturing opposing ships. 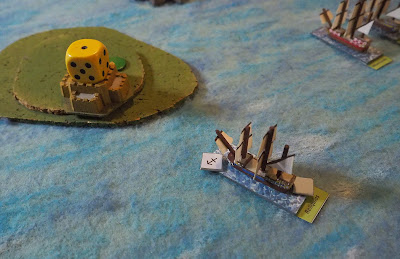 The Dutch Reijger gained nothing from the port, but took a few shots at the Santa Amaro as it sailed past. 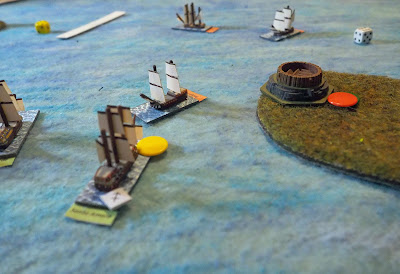 Things got busy in the centre of the board, as the Portuguese sent two carracks to the final port they needed to visit. The Dutch raced to get there as well. 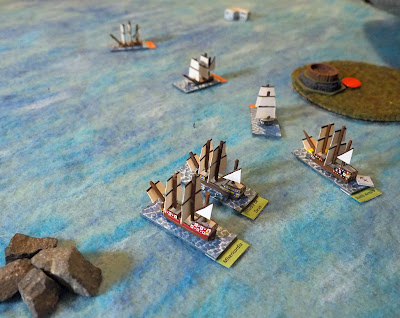 The Madre De Deus fired at the little Eendracht, damaging her. 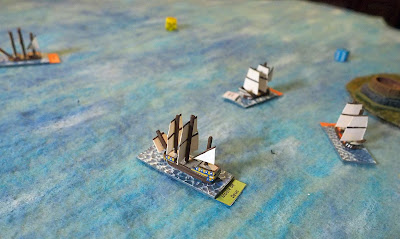 The Java picked up a first treasure for the Dutch, evening the scores. 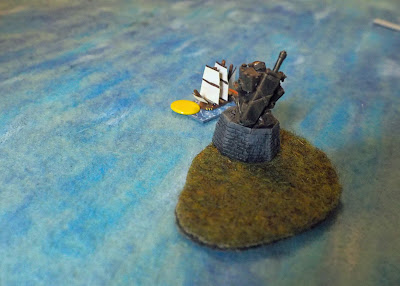 The Reijger suffered damage from the Santo Amaro as it sped past. 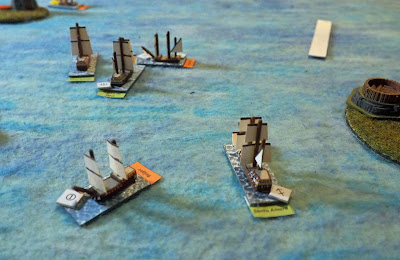 Disaster in the centre! The Madres de Deus collided with the Eendracht. The sturdy carrack took no damage, but the Dutch ship was crippled. 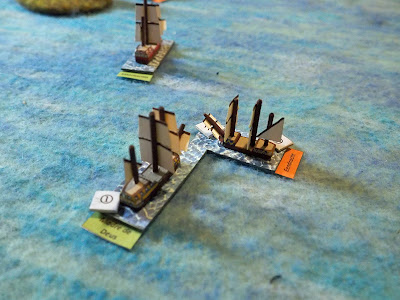 The Misericordia did the third and final port visit for the Portuguese, but secured no wealth. 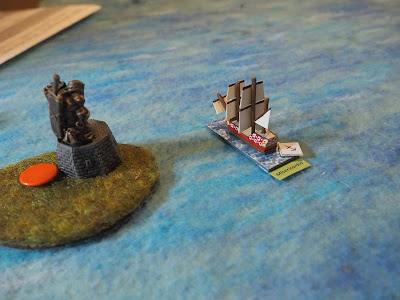 However the Portuguese edged ahead on points when the Madre de Deus sank the Eendracht. Purely for business reasons. 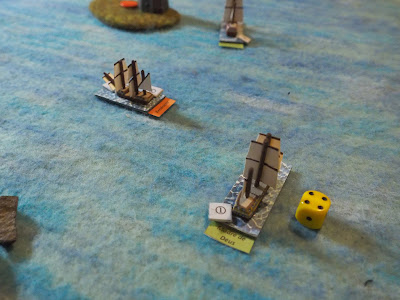 With only two turns left, however, the Dutch arrived at their third port - and acquired a second treasure! And owing to shifts in the wind, all of the Portuguese ships were badly positioned to deal with this sudden shift in fortune, being unable to rapidly work upwind to the Dutch ships carrying loot. All bar the Reliquias and its crew of dubious quality. They fired on the Reijger, but with no effect. 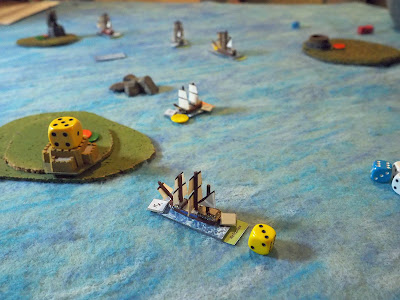 All the Dutch had to do now was survive, and they used their agility and shallow drafts to go where the Portuguese couldn't easily follow. 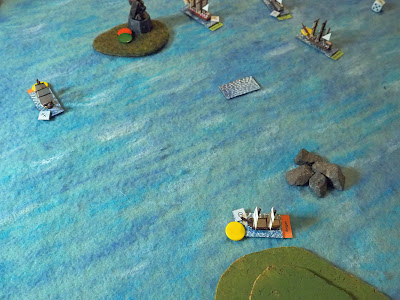 With one turn to go we called the game, since the Portuguese couldn't even get in a long-range shot in order to sin a Dutch ship.

Catherine won 10-6 - she got two treasures whilst I had one and had sunk an enemy ship.

This is a bit of a random scenario with two, very much dependent on the rolls at each island. But there's always a chance - with planning - to take a treasure from another player. In this scenario the Portuguese stand a good chance of holding on to their treasure; the Dutch can't easily damage their ships. But the Dutch have the advantage of maneuver, and were able to put it to good use. Portuguese activation rolls were pretty lucky as well, though. I'm going to try this setup again sometime.
Posted by Kaptain Kobold at 22:06