I'm about to embark on a reread of Edgar Rice Burroughs'  Barsoom series, so for this weeks HOTT 52 game I thought I'd get out the classic Red Martian vs Green Martian combination, specifically the forces of Helium, led by the mighty John Carter against the ferocious hordes of Warhoon.

The Green Martians of Warhoon were defending against a punitive action by the Empire of Helium. This is their hordes - eight knights, including the general, and four shooters. 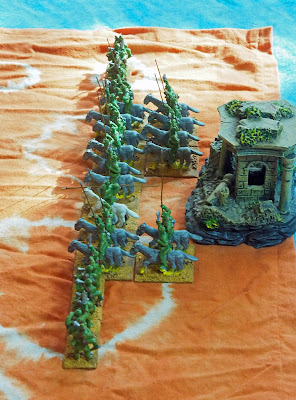 The forces of Helium - six blades, two airboats, a flier and John Carter himself as a hero general. 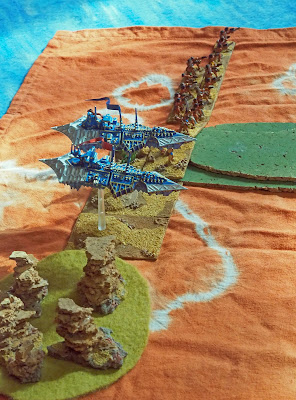 And their Green Martian counterparts. 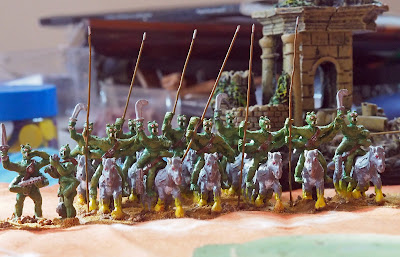 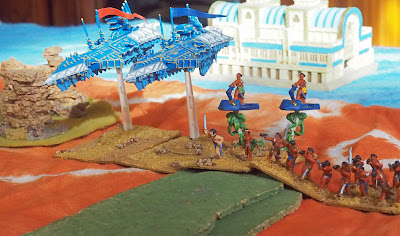 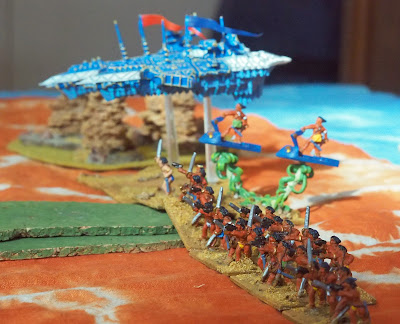 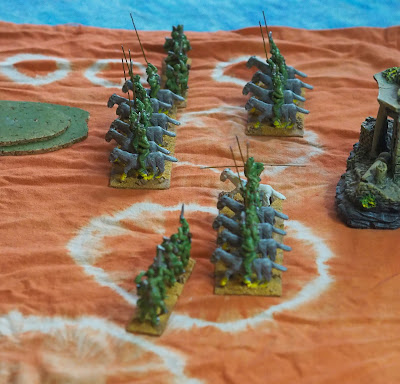 Helium advanced as well. Their warriors were massed on one flank, with the aerial navy covering the other. Warhoon's deployment was simple; massed warriors on thoats in the centre, with the rifle-armed troops on each flank to cover against the aerials. 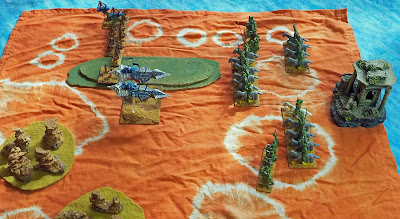 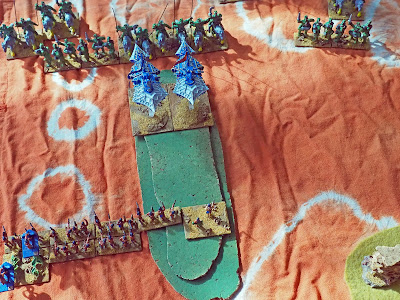 On the flank the Red Martians approached their foes. 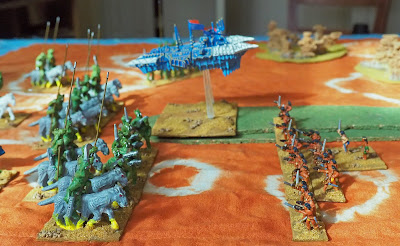 The light fliers passed overhead, and the Green Martians turned to take them under fire. 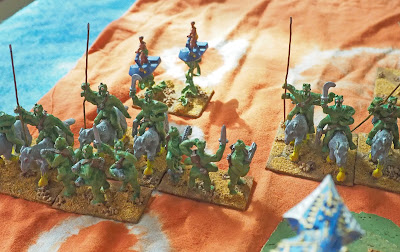 They attacked, to pin the Warhoon warriors as the rest of the army marched on them. 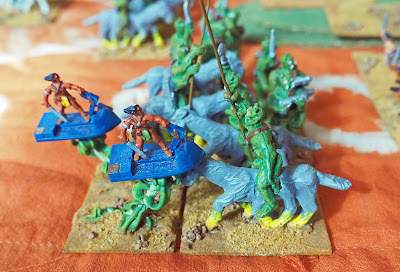 Warhoon's right flank was in a mess, with elements facing front and back. 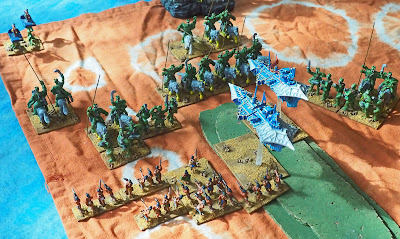 John Carter moved to the fore, to lead his men personally. 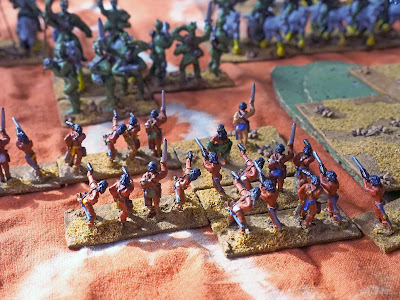 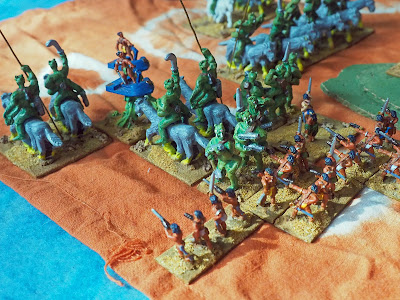 John Carter was driven back by intense rifle fire, but another group of Warhoon warriors were cut down. The fliers were driven back, though amd found themselves surrounded and destroyed before they could escape. 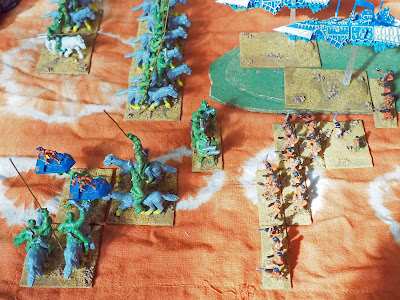 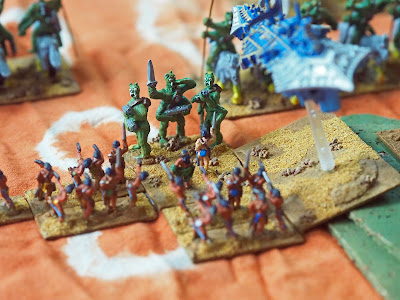 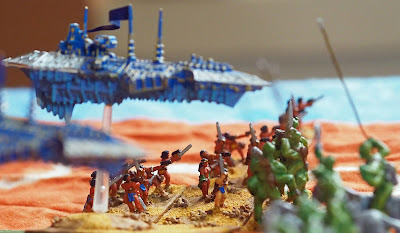 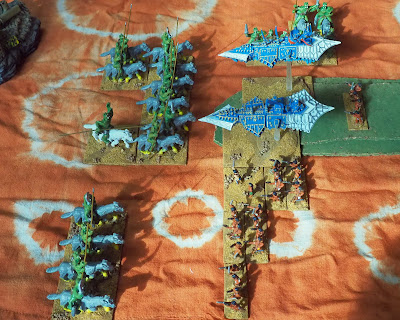 Meanwhile Warhoon's other rifle-men were engaging the other airboat. Some Red Martians moved over and took position on the hill in support. 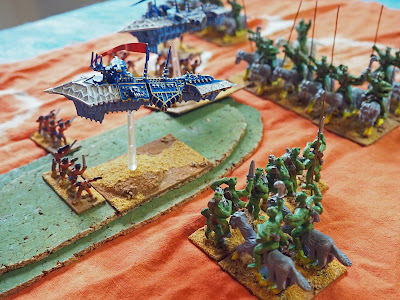 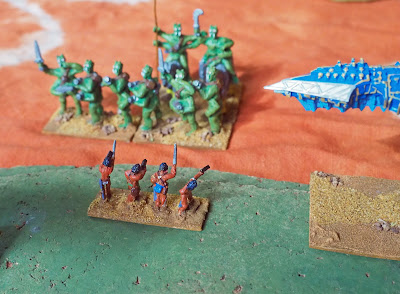 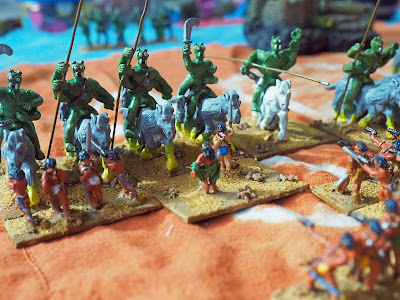 Their Jeddak ploughed through the first line of red warriors. 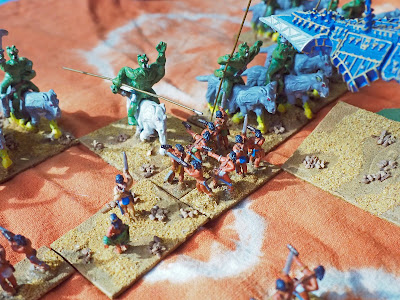 John Carter was driven back again. 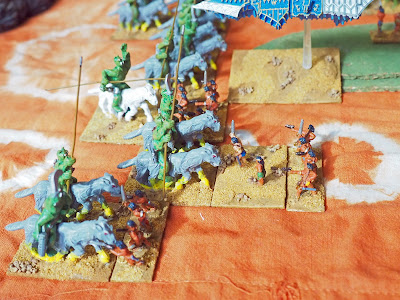 Heliums' navy supported the red warriors in an attack on the Warhoon flanking force, but were driven back. 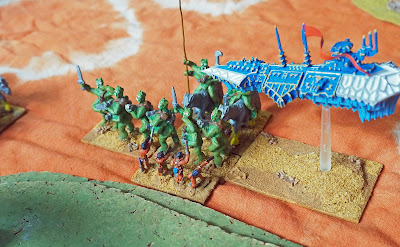 Disaster. The Jeddak of Warhoon pushed forward too far, and was double-overlapped. And the combat dice were not kind. 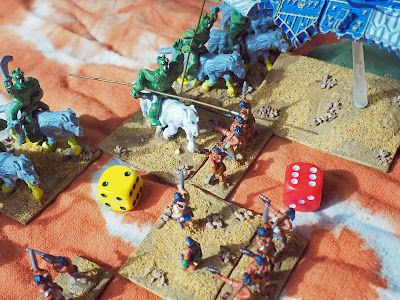 And that was game over for Warhoon - they had lost two shooters and their general, whereas Helium had lost their flier and an element of blades. 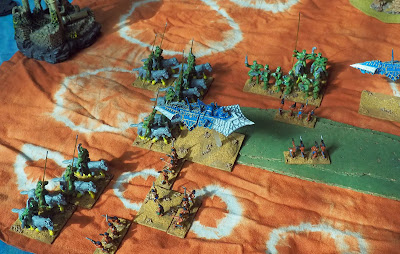 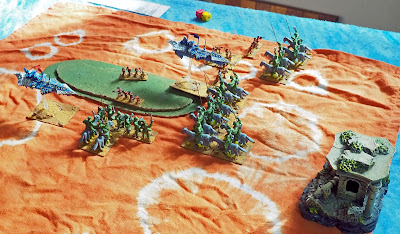 It's a while since I've had any of my Barsoom armies on the table, so it was fun to do them as part of this project. I think you'll be seeing some more.
Posted by Kaptain Kobold at 16:30