I enjoyed last week's Barsoomian HOTT game enough that I thought it would be fun to try a another one this week. I only have three of my Barsoom armies in my gaming room, so I brought out the one that hadn't seen action last week - the Black Pirates - and, rather than go for the old cliche of pitting them against John carter and the forces of Helium, I used the Green Martians. This time, though, I used the version in the rules with a hero general - the horde of Thark, led by John Carter's best buddy, Tars Tarkas.

The Black Pirates ended up as the defenders. With lots of aerials and facing loads of knights, placing a pile of bad going was always going to be on the cards. And they got lucky with the placement, being able to spread it around the centre of the board. Their aerials could ignore it, whilst the green men of Thark would have to wend their way around it.

The Tharks selected an edge that would have them deploy and move past the bulk of the bad going, and fight the Pirates in the more open terrain beyond. They deployed in two groups. The one on their left was a blocking force, designed to pin down the Pirates on that flank by threatening the stronghold. The second, led by Tars Tarkas himself, was to run down the other flank, where there were fewer aerials, and attack. Being a hero, Tars Tarkas could contact aerial elements, and leave opening for the rest of his army. Both forces were assigned a pair of shooters to cover their flanks. 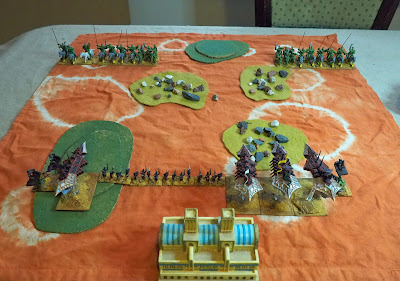 The Black Pirates had the bulk of their aerials on their right, reasoning that they could swing across the centre as required. Their stronghold was covered by their foot troops. 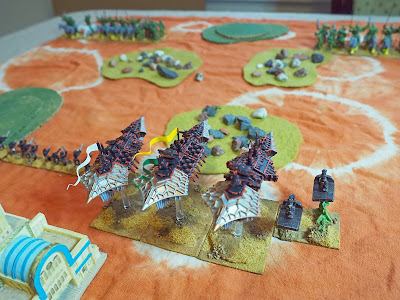 The Tharks' plan was OK, up to a point. In fact Tars Tarkas was positioned such that there was too large a gap between him and his left flank force, which meant that it would cost extra PIPs to move them. True, they were simply a delaying force, but it would have been useful to have them able to move swiftly if requited. 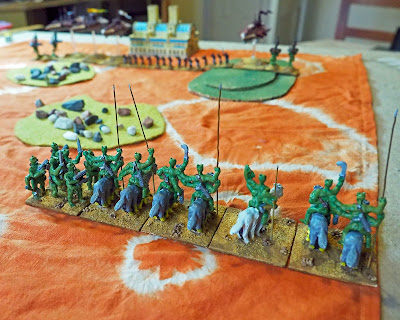 The opening turns saw the Pirates get off to a slow start, whilst the Tharks got a couple of good PIP rolls and were able to advance their whole army. The Pirates swung the bulk of their airboats across the centre to attack the Thark wing containing their general. 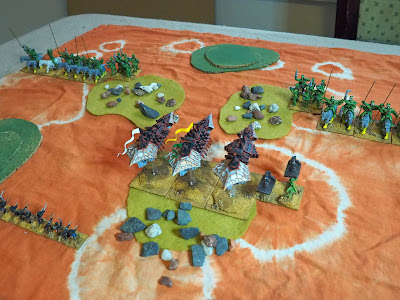 As the airboats crossed the board, Green Martian shooters took them under fire, but with no effect. 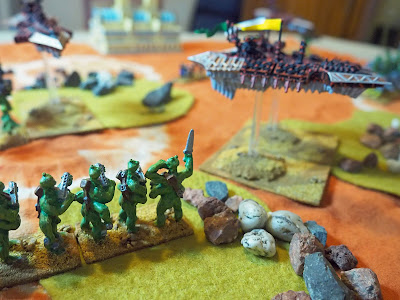 The shooters covering the Thark right came under direct aerial attack, and took the first casualties of the game - an element was destroyed in the first combat. 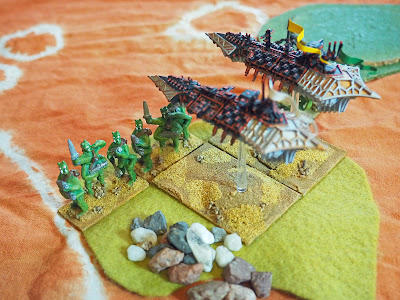 But Tars Tarkas and his thoat-riders had now reached the Black Pirates opposing them, and he led the attack, taking on their flyers. They held his first attack, and only recoiled from the second. 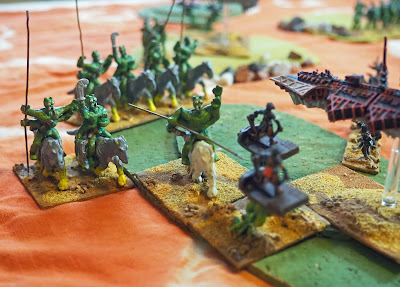 Meanwhile the Black Pirates were continuing their attack on the Green Martian foot, who held them off initially ... 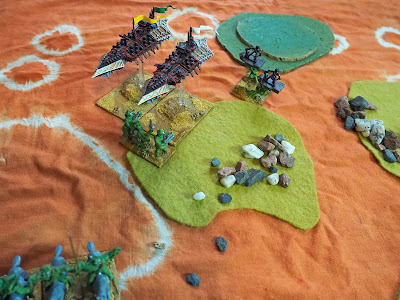 ... but were soon surrounded and cut down.

Meanwhile the Black Pirate foot closed up on the advancing Tharks. 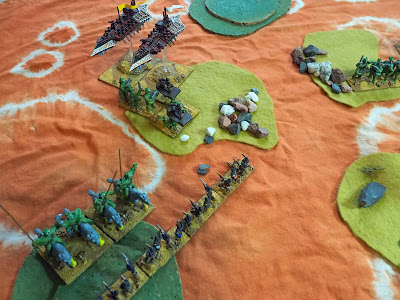 Even with support Tars Tarkas continued to make heavy weather of the Black Pirate flyers, but eventually destroyed them. 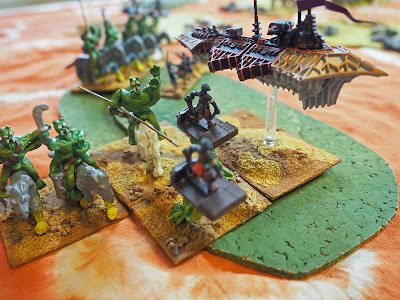 The Black Pirates charged the Tharks ... 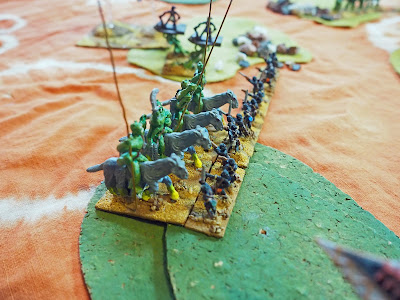 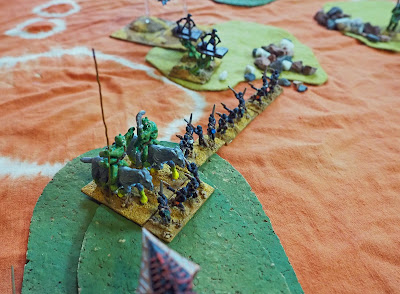 With their forces concentrated on their left the Black Pirate right was inactive, so Tars Tarkas used what command he could to order his troops on that flank to advance, hoping to threaten the stronghold. 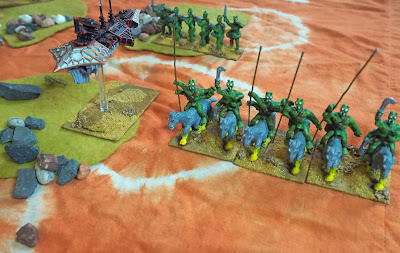 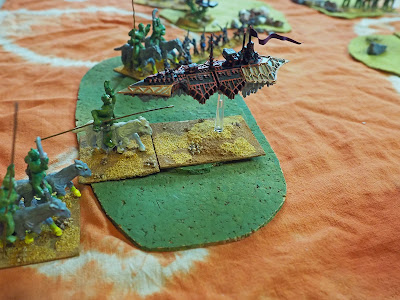 ... but was repulsed and, beyond him, more Tharks were destroyed by the Black Pirate foot. 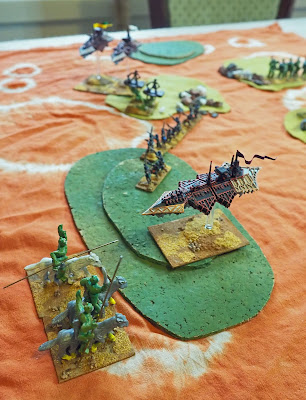 On the Thark left the Pirates had sent in their one airboat, which attacked the flank of the advancing warriors. One group pursued into bad going by the retreating airboat, where they were easily dispatched. 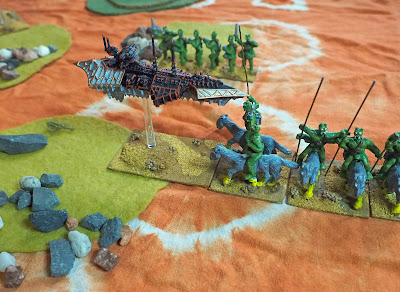 On the other flank flyers and foot reinforced the lone airboat ... 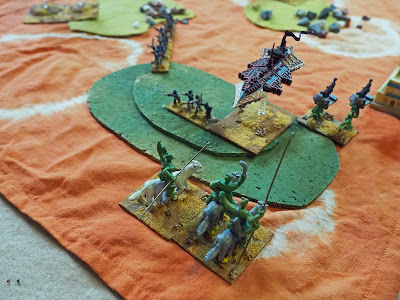 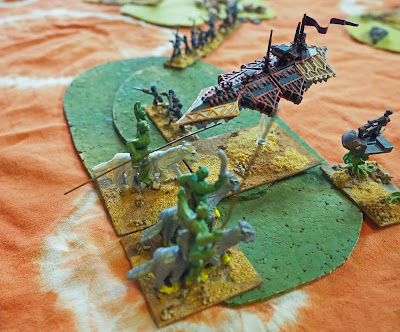 Held to a draw the mighty green warrior was soon surrounded ... 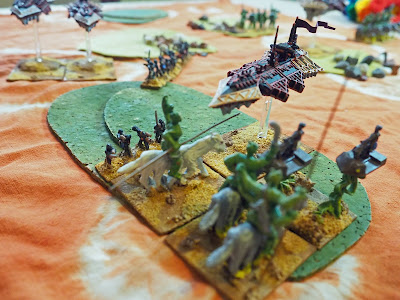 ... but "Leave to a Thark his head and one hand and he may yet conquer. Tars Tarkas destroyed his foe, and survived. Meanwhile his companions drove back the Black Pirate flyers, which fled ... 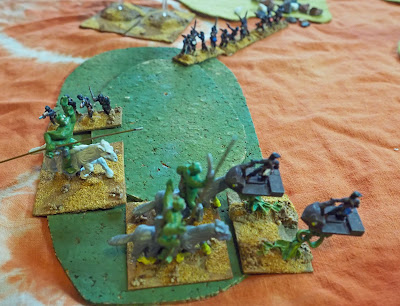 ... leaving the Thark warriors almost at the very gates of the Black Pirate stronghold. 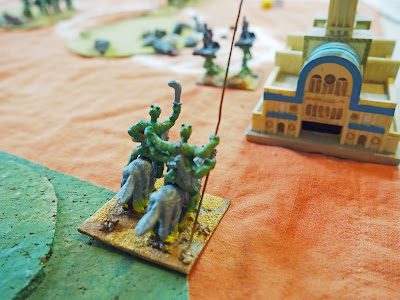 On the other flank the Pirates continued their attack. 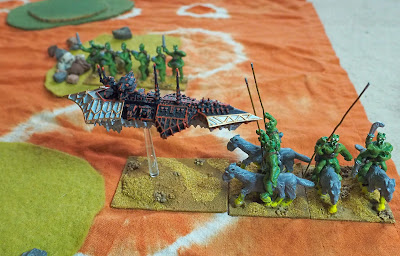 But this time the Tharks prevailed, and another airboat fell. 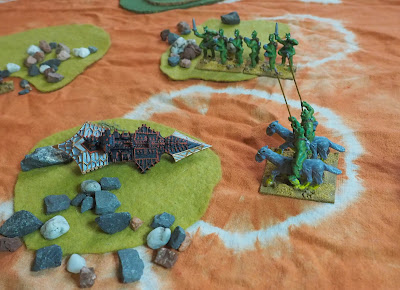 As the remaining Black Pirate airboats closed on the Tars Tarkas, his warriors assaulted the Black Pirate citadel. 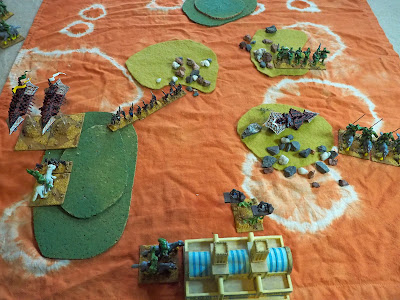 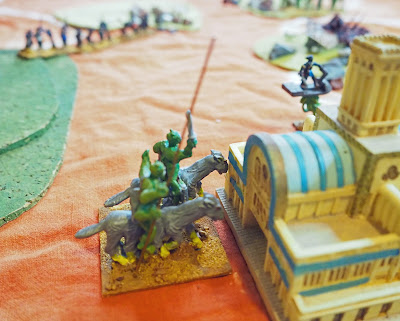 ... and their attack was defeated when the Black Pirate flyers returned to the fray. 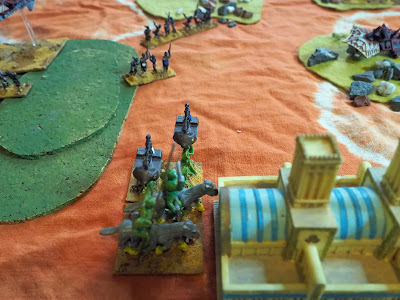 Alone against the Pirates, Tars Tarkas shouted defiantly. But his army was broken. 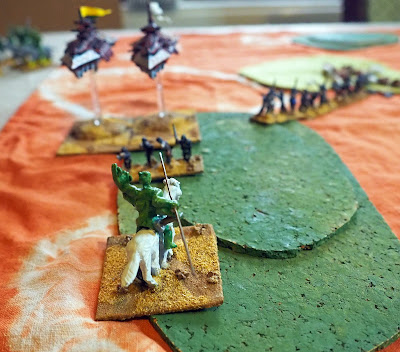 The final positions. The Tharks had another advance on the stronghold developing, but had simply run out of troops. 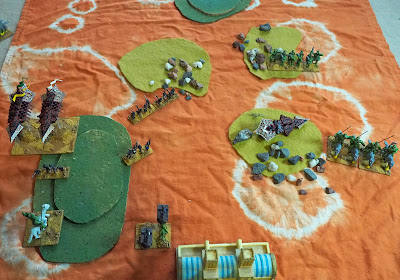 This was a fairly close game, with the Pirates seeming advantage in aerials and terrain offset by the fact that the Green Martian troops are still quite difficult to take down with airboats. The Green Martians knights have the advantage that airboats have a relatively low factor against mounted and that, if the airboats recoil, the knights pursue and maintain contact. And Tars Tarkas should have been useful against aerials, although some poor combat results meant that he was less effective than anticipated. I really loved how this game looked, though, with the big airboats and hefty Green Martian figures.
Posted by Kaptain Kobold at 15:36