I have been looking at putting together a small force of 16th century Korean and Japanese ships to add to my Galleys & Galleons collection, so over the past couple of days I've been creating some prototypes. They are roughly 1/200th scale and are, as always, a combination of lolly-sticks, cocktail sticks and card.

It goes without saying that I'd have a go at the famous Korean geobukseon, or 'turtle ship' first. 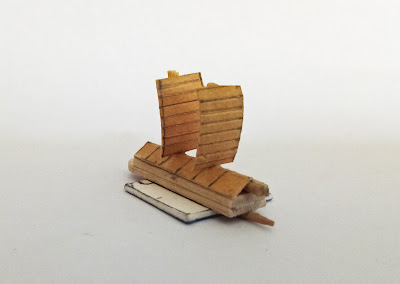 These were low ships with powerful broadsides, oars, a ram, and spiked armour. Additionally it's claimed they mounted a dragon's head on the prow that could fire flaming projectiles. In Galleys & Galleons terms it's formidable, with sails, sweeps, a flame-weapon to the front and the ironclad trait, plus a range of defences against being boarded.

I took a few liberties with the design, making the ram a spike (so as opposed to the metal plate the historical version had), and reducing the dragon's head to a simple gun. I may still rework the latter into something more suitable, though, albeit still impressonistic. 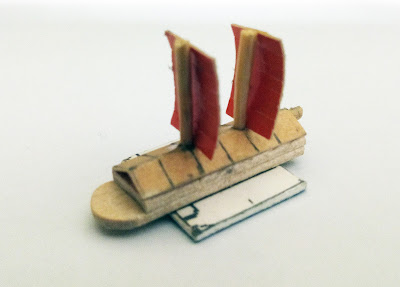 Next up is the beginnings of some opposition for it, a Japanese atakebune. These are effectively high-sided armoured galleys, with little in the way of canon, but filled with soldiers and equipped for boarding. 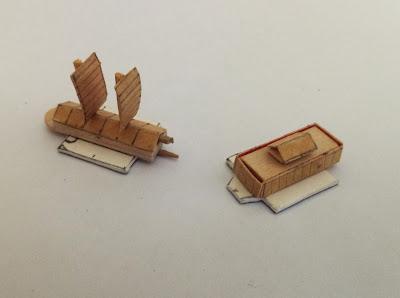 Although they look formidable, in points terms you'd need three of them to match one 'turtle ship'. However being outnumbered by Japanese ships seems to have been the norm for the Koreans. 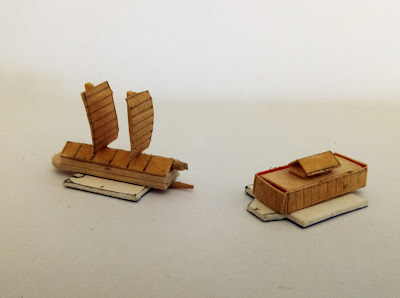 It's an interesting matchup all round, with numerous Japanese oared vessels using boarding tactics against numerically inferior Koran sailing ships equipped for gunery. 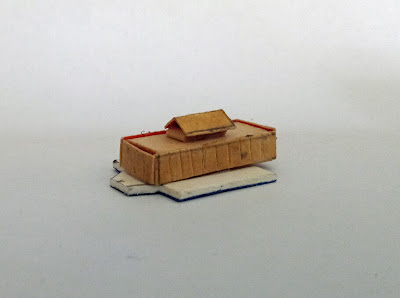 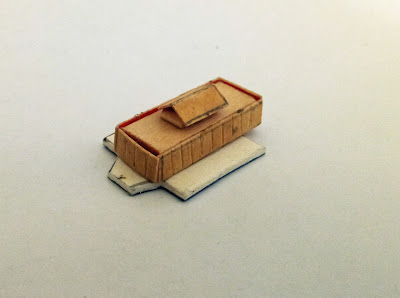 The atakebune stats in Galleys and Galleons suggest a basic version, but it sound like there could be larger versions as well. I thought I'd make one to maybe serve as a flagship.

I have two more vessel types to prototype. For the Japanese there's the sekibune, which is a smaller, lighter galley appearing far less like a floating castle. And for the Koreans there's the panokseon, which is their standard warship and similar in appearance to the atakebune, if rather different in terms of traits and actual performance.

(Googling any of the terms will show you more pictures than you can possibly handle and give yu an idea of how fantastic the real things looked and how simplistic my designs are.)
Posted by Kaptain Kobold at 12:29