It was a busy time at the Gong Garage Gamers last night, with Ralph, Bryan and Theo playing a WWII game I managed to not document at all (although it had a Me262 in it), a group playing their continuing Maurice campaign and Geoff and myself playing DBA. There's some pictures of the Maurie at the end of the post, but first: DBA.

In the first game Geoff eagerly grabbed the Parthians against which I fielded some Arabs. The battle looked set to be camels vs cataphracts.

I defended, and placed a number of areas of dunes to facilitate the movement of my mounted, whilst hampering that of the Parthians. 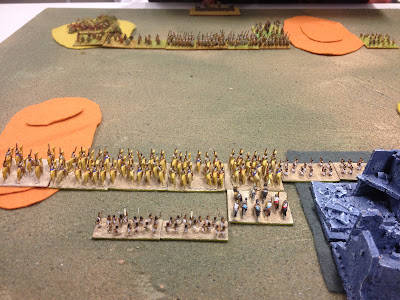 The Parthians advanced, but some of their cataphracts fell to accurate Arab archery. 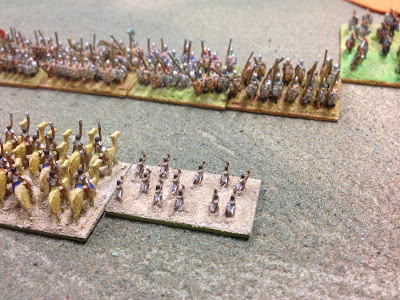 Geoff remembered that light horse can march move, and suddenly slipped a pair of horse-archer elements into my rear to threaten my camp. 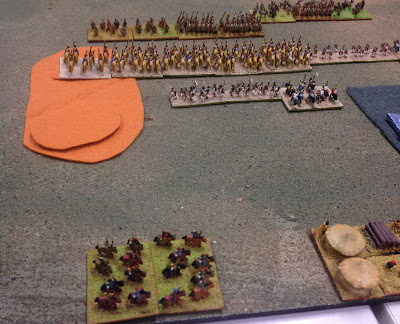 My archers destroyed a light horse element, putting me 2-0 up. Seeing his hillmen allies still in a column, I rushed some slingers and light cavalry to hit them front a flank; a win would give me the game. I didn't win. 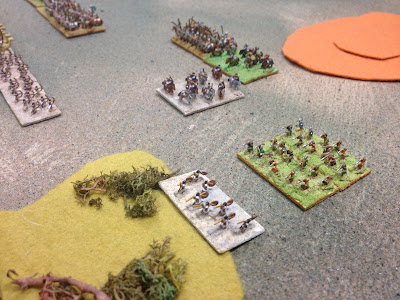 Meanwhile my cavalry general rushed to block the movement of the horse-archers in my rear, and got surrounded for his trouble. 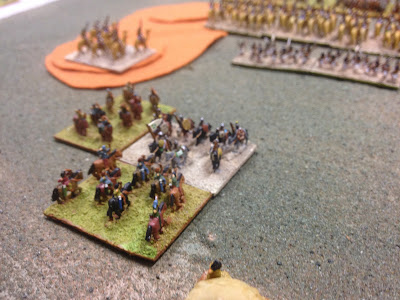 He fought off one of the Parthian elements, destroying it, then turned on the other, with support from the camel scouts attacking out of the dunes in which they were hiding. With the loss of that element, the Parthian army broke, giving the Arabs a 4-0 victory. The main lines never engaged. 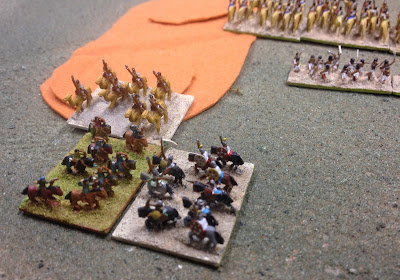 For our second game, Geoff took the Early Imperial Romans, whilst I went for the Meroitic Kushites. Against the odds the Romans defended, leaving the Kushites advancing along what turned out to be a dried-up stream towards some inconsequential fields. 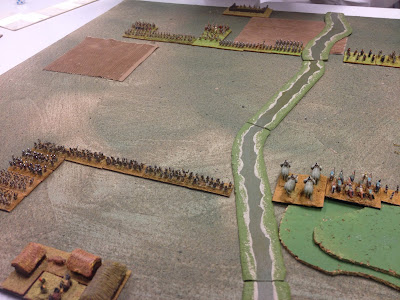 The Kushite general, resplendent on his elephant, led a flanking force along the opposite bank of the stream. 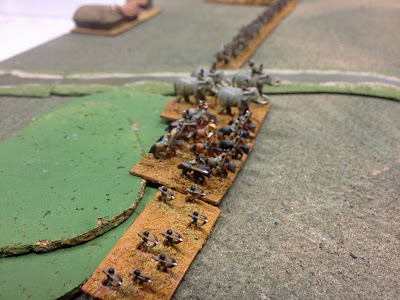 The Romans turned some of their army to oppose it. I got a bit overenthusiastic, and advanced the force too far before the rest of the army advanced in support. 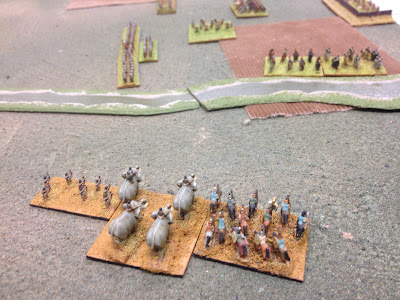 Discovering the river was no obstacle, the Kushites attacked. Their general came under potentially deadly artillery fire. 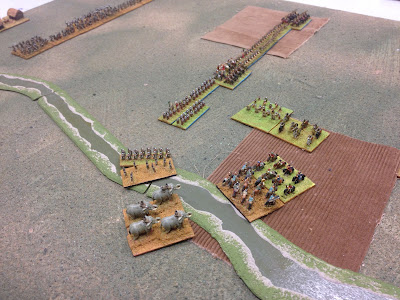 He sought safety in close combat, taking on some legionaries. 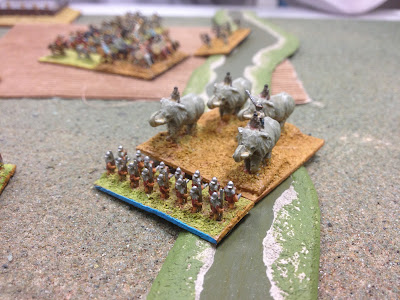 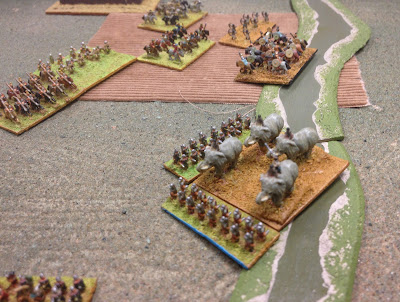 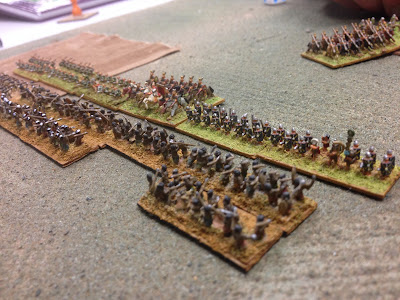 The Romans did a bit of reorganisation. 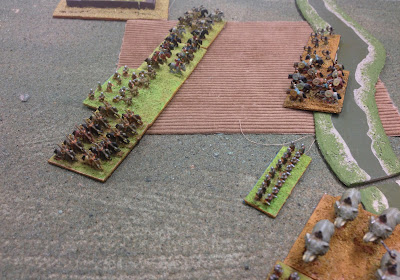 And the Kushite general survived another potentially deadly attack. 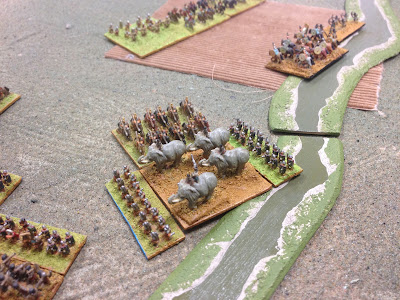 The Kushite and Roman infantry was now hotly engaged. On the far Kushite left their archers were failing to make an impact on the auxiliary infantry. 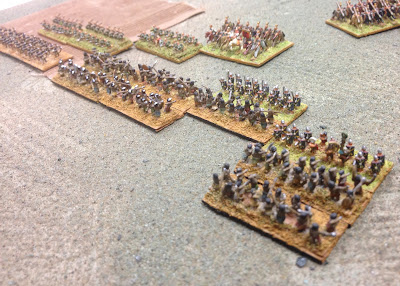 The Romans fighting the elephants were being pushed back into their own army now, with fatal results. 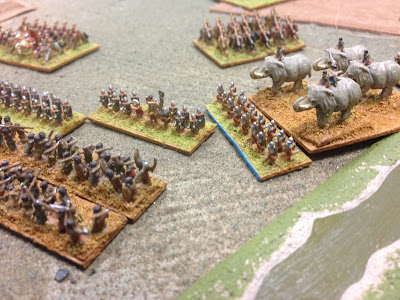 The turning point: the Kushite cavalry attacked the Roman artillery, destroying it, whilst skirmishing archers destroyed  the Romans' auxiliary horse-archers. The Romans were now 3 elements down. 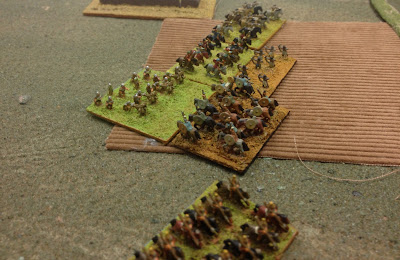 On the Kushite left, some of their archers fell to a push by the auxilia. 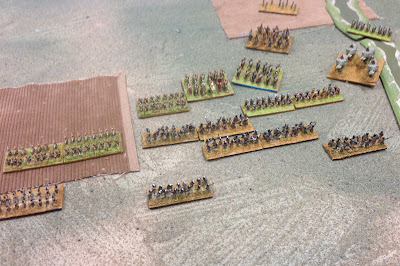 But it wasn't enough; the Kushite cavalry drove into the Roman rear and in the confusion some auxiliary cavalry was lost, giving the Kushites a 4-1 victory. 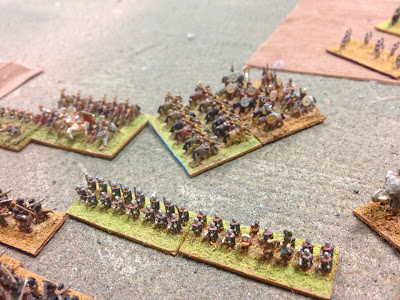 Gary, Peter, Daniel and Caesar continued their Maurice campaign. I'd be up for this as well, but the rules really require an even number of players, so we need an A.N.Other to take part as well. Here are a few pictures of their games. Firstly Caesar's French against Peter's Austrians. Peter has adopted a massed army approach in the campaign, opting for no national advantages. 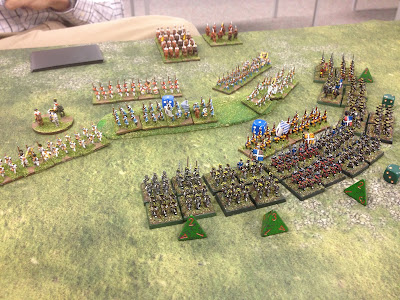 Gary had originally used Prussians, but in this round he dropped them in favour of his newly-painted Ottomans. And they *are* gorgeous. They fought Daniel's Russians. 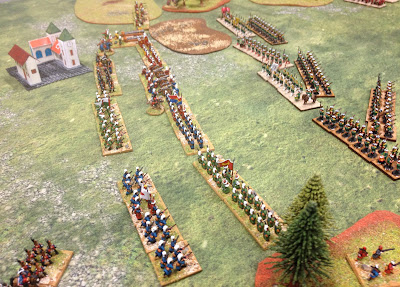 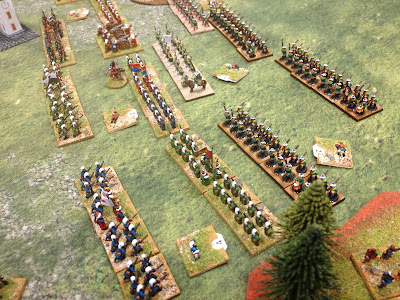 I realise now I failed to get any pictures of the Ottoman irregular cavalry and infantry (and there's a lot of it), but I hope this picture of some of their artillery will make up for it. 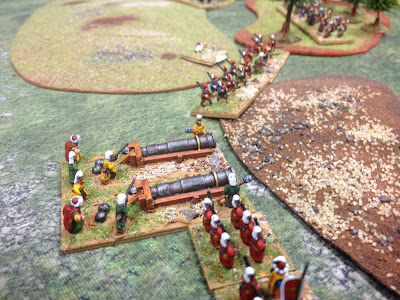