"One must act with severity, or perish"

'Walker' is a 1987 film by director Alex Cox, starring Ed Harris. It's a quirky retelling of the life of 1850s American filibuster William Walker, although it is also intended as a commentary on the then contemporary US involvement in Nicaragua. The film is famous for including deliberate historical anachronisms, and it was those which inspired me to put together an army for 'Hordes of the Things' based on it. Since it put in a brief appearence on my blog the other day, I thought I'd do a post showcasing it.

Needless to say if you haven't seen the film, and you want to, this post will contain one or two spoilers.

The army is as follows:

Bar the helicopter and the cow (what?) every figure in the army came from Peter Pig, and there's surprisingly little in the way of conversions. I got the look of 1850s irregulars, both American and Nicaraguan, by using various figures from Peter Pig's Wild West and American Civil War ranges. They also provided most of the character figures, although some were done from WW1 Austro-Hungarian commanders. The US Marines are professional soldiers from the AK47 range. The cow is from Irregular Miniatures, and the helicopter from my son's toy-box - he didn't miss it at the time I made this army five years ago, and is 16 now so doesn't care.

On the the army. Here are the Nicaraguan Democrat allies, classed as Hordes: 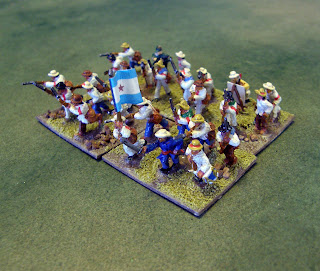 They are mostly a mix of Confederates and Mexicans from the Wild West range, but there's also a US military advisor (not actually in the film, this one, but true to the concept I feel, and the figure was going spare): 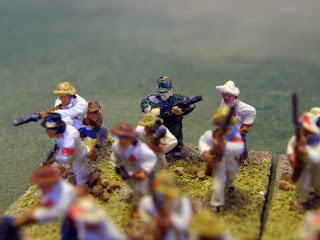 The element also includes the English artist Doubleday, who tags along with Walker's forces for much of the film: 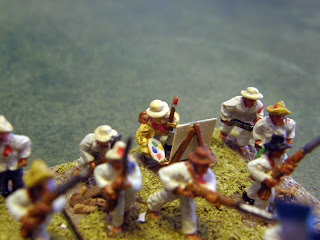 Next are Walker's Immortals; filibusters from the USA. They are primarily Peter Pig gunfighters from the Wild West range, as this gives them a more irregular, non military, appearance: 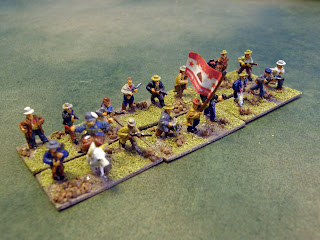 The flag was apparently made up for the film. I drew it up in a photo-editing package, using about five stills from the film as reference (there's not a single shot I could find that shows it in its entirety). The wording says 'Not Without Honor': 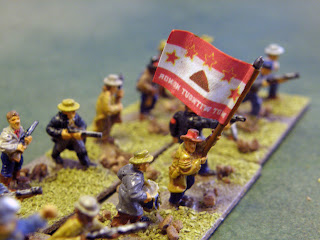 I have no idea why Baron Bruno von Natzmer first appears in the film riding a cow, but I couldn't not include him: 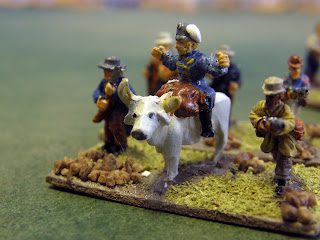 Ideally this element should include one of Walker's many political opponents in front of it, but it wouldn't have fitted in the base depth. The firing squad is a Shooter element, and is mostly Wild West gunfighters with a Confederate officer in charge: 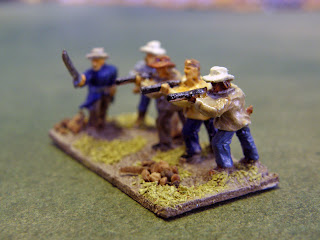 The main man - William Walker, the 'gray-eyed man of destiny', and the sort of person who writes an autobiographical account of his exploits in the third person (seriously - 'The War In Nicaragua' it's called - recommended, and fascinating, reading, so long as you remember that he wrote it himself). Accompanying him on the element base are (left to right): Doctor Jones, Major Siegfried Henningson and Captain Hornsby: 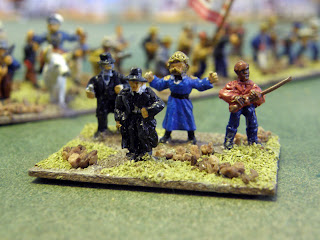 Finally, the bit everyone who has seen the film remembers - the US Marine Corps helicopter. It's not the same kind of helicopter which appears in the film, but it was all I had to hand that was likely to fit on the element base. the figures are from the AK47 range: 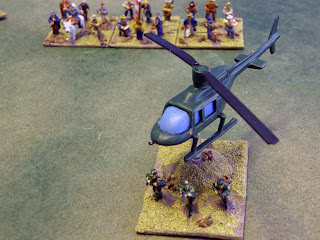 Here's the stronghold. Yes, it's the chapel from the Alamo. May years ago a work colleague of mine brought it back for me from a holiday in the USA, and it sat on my desk at work. But I eventually decided that it might have more use in a game, so I gave it a quick paint, added in the steps to hide the words on the base (it says 'The Alamo', obviously) and put it to work as the kind of impressive Nicaraguan building you get to see in the film, before Walker has them all burned down: 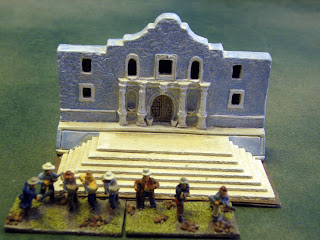 The above photos were taken with my 'real' camera, which is good for doing that kind of thing. Here's some arty shots I took when I was trying out the new macro lens for my iPhone. 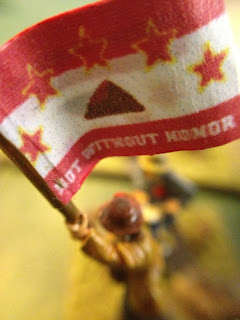 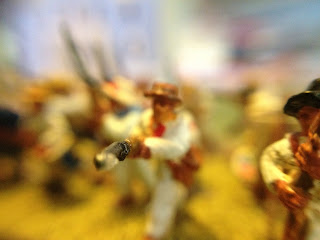 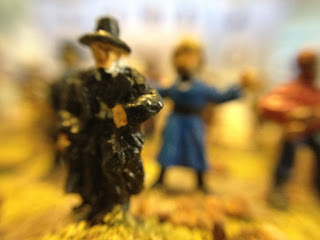 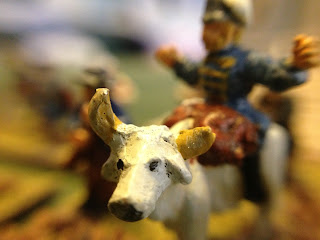 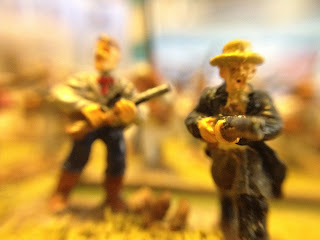 A quote from the film:

“I cannot help noticing Sir, during the time I've spent with you, that you've betrayed every principle you've had, and all the men who supported you. May I ask why?”
“No you may not.”

“What exactly are your aims?”
“The ends justify the means.”
“ What are the ends?”
“ I can't remember.”
(Doubleday and Walker)