The Battle Of Tijuana

It's my birthday today. I've had a good present haul, of course, some of it in useful hard-cash form and some of it of relevance to this blog. Here's the items of relevance: 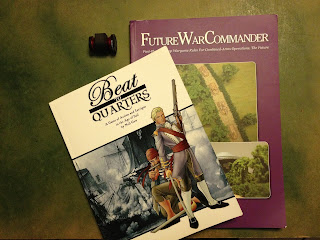 Two new games (courtesy of my brother) - one a RPG and another a set of miniatures rules I've been keen to try for a while. The small black object in the corner is a lens attachment for my iPhone; it gives me wide-angle, macro and fish-eye capability, all of which I will find useful.

This afternoon I played through another Mexican Revolution game, using the latest draft of my 'Struggle Against Everything And Everybody' rules. I based my game around the 1911 battle for Tijuana. Tijuana is in Baja California, right against the border with the USA. In 1911 the Federal garrison of about 200 was attacked by a force of 200 Magonistas, followers of the anarchist Flores-Magon brothers. The Magonista force was, in fact, mostly Anglo-American - only ten of them were Mexicans - and there were accusations that their campaign was less about revolution and more about good honest US filibustering. They were commanded by a British soldier of fortune, General Caryl ap Rhys Price, who claimed descent from Owain Glendwr.

In 1911 the Magonistas captured the town of Tijuana, although they only held it for a month. Could they repeat the feat?

I set up the town on the edge of the board, representing the fact that beyond it was the US. Troops retreating off that edge would not be coming back. Although in the actual battle the forces were equal I went for the following OOB to create a 'balanced' game:

The forces represent the chronic lack of artillery the early revolutionaries had. But they were otherwise assumed to be well supplied with arms from the US.

The Federal forces obviously had the cover of buildings, and could also make use of barricades in the gaps between them.

The Federals deployed by placing counters where they wanted a unit to be. the Magonistas then rolled a D6, and the Federals had to actually deploy that many units in place of the blank counters. The Magonistas then chose how to split their forces; they could start on any board edge except the US border. The Federals then got to deploy their remaining troops.

I won't bore you with details, but it ended up with this Federal deploymant - the Artillery and Machine Gun were covering the western approaches, with Infantry covering the east. The Cavalry and a unit of Infantry were held in reserve: 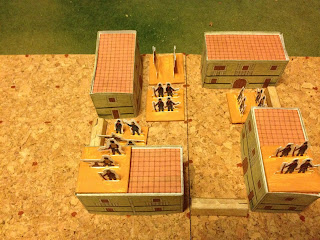 The Magonistas were split to the east and west. The western force was a screen consisting of the two Cavalry, one Infantry and the Machine Gun. Their aim was to prevent the Federals from pulling troops away from that side of the town by threatening it with a lightning cavalry attack. the Machine Gun would be sited to provide long-range covering fire as well. The eastern force, of five Infantry was the main attack; their orders were to rush the town - nothing subtle: 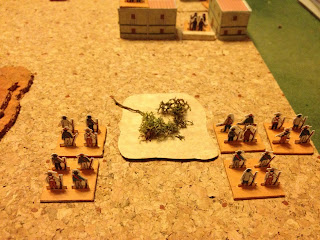 The western diversion moves into position: 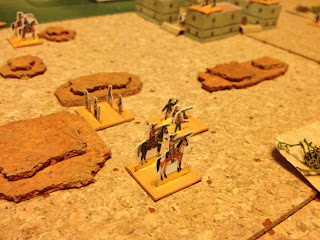 The Magonistas attack the town under heavy Federal fire: 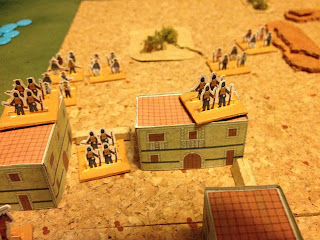 Showing off my birthday present - a fish-eye view of the battle from the US side of the border: 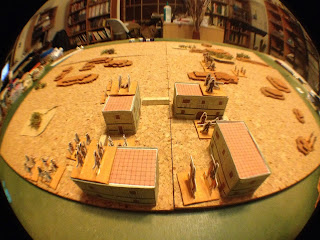 The Magonista forces charge hard, but the Federals get the initiative a couple of turn in a row and cause heavy casualties: 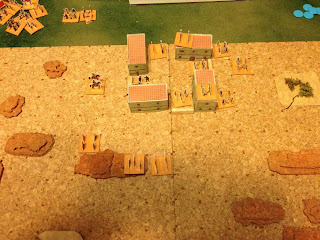 With the eastern attack faltering the diversionary force is thrown into the battle to try and relieve the pressure: 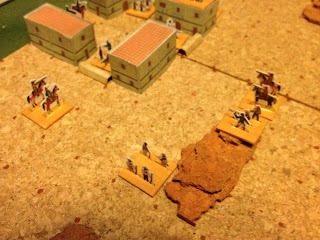 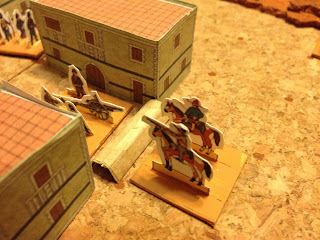 And against the odds it pushes it back: 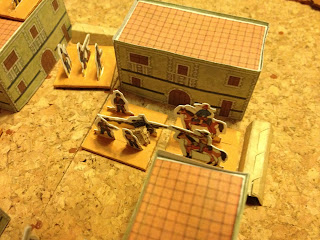 The other cavalry unit tries the same trick against the Federal machine gun, but is mown down: 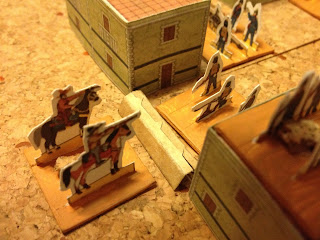 The Federal cavalry gets in on the action, charging out of the town to scatter the stalled Magonista infantry assault: 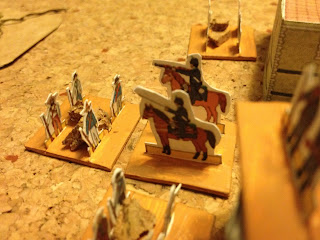 Although the Magonistas have a couple of units in the town, the Federals are still in a strong position: 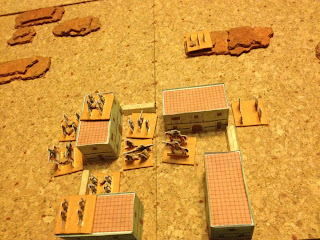 After this photo was taken a Magonista infantry unit was destroyed by Federal cavalry, and their machine gun came of worse in a duel with their Federal counterpart.

At this stage I got called away by a delicious meal of halloumi and beetroot (plus beer), as well as a birthday phone call from my parents in the UK, so I called it a day. The Magonistas had forced an entry into the town, but they weren't going to be able to hold onto it; the Federal forces had won the day. The key to their victory was partially down to good initiative rolls, in that they got to act first on a couple of turn just as the Magonistas reached the town, causing heavy casualties before the attack could be properly launched. But the Magonsitas probably had too many troops tied up merely threatening the western side of the town rather than supporting the main attack; the machine gun may have been better deployed adding covering fire.

As with other games using these rules it played quickly and with no fuss. There are a couple of small changes I will feed back into the rules, but they are mostly working well.

Email ThisBlogThis!Share to TwitterShare to FacebookShare to Pinterest
Labels: birthday, filibusters, general, mexican revolution, morschauser rules, report, struggle against everything and everybody