The One Hour Great Northern War

Before I got One Hour Wargames I did some fishing around on the 'net to see what other people thought of it and read about the games they played. In the AMW Yahoo Group I found variant rules in the Files section, which took the basic OHW rules and tweaked them for either different periods or to add more flavour for specific periods.

One of the sets is for the Great Northern War, so I printed it off and gave them a run today (in two half-hour sessions, broken up by a visit to the cinema to see the third part of The Hobbit. Don't bother. It's bollocks.)

The set seems to be based on the Pike and Shot set, with a few changes. Troop types are now Infantry, Dragoons, Cavalry and Artillery. Dragoons are really just slower, less powerful versions of Cavalry. All units may charge (indeed nothing restricts Artillery from doing it, but I house-ruled that straight away), but only Infantry and Artillery can shoot, running out of ammo on a '1'. Shooting now has two range bands, with long-range fire being less effective. Close combat is much the same as the Pike and Shot set. There are some national differences; Russian Infantry fire at one point better at long range, but Swedish Infantry get a one point bonus in close combat.

I added a couple of bits of my own, including some thoughts on how arcs of fire are blocked (which I'm still working on) and allowing units to retire directly to their rear as a move - the unit must move straight back for up to half of their movement distance. They may only turn at the end of the move, either 45 degrees, or a complete 180 degree about-face.

The rules have their own tables for generating armies. I generated a Swedish army of four Infantry, one Dragoon and one Artillery against a Russian army of four Infantry, one Dragoon and one Cavalry. I picked a scenario at random and got 16 - Advance Guard. This has a road crossing the table from one side to the other, with a town in the centre. The two armies are marching down the road until they meet in the town. Victory goes to the side which controls the town.

Both armies led with their mounted troops. The scenario states that they must march down the road until one army occupies the town, but mounted troops can't do that. So I assumed that their passing through the town was considered good enough. 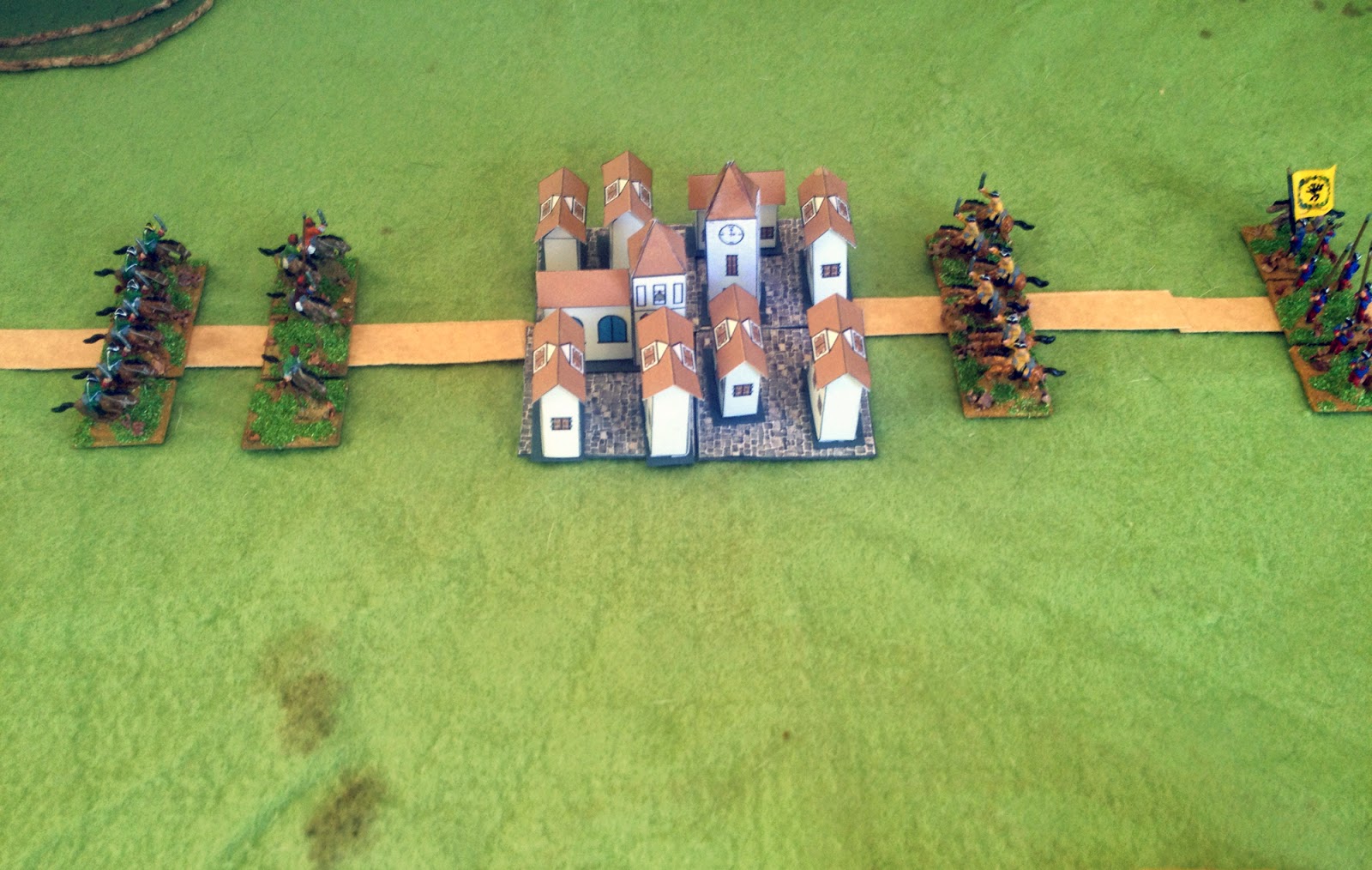 The Russian Dragoons unit (represented by Cossacks) passed through the town and engaged the Swedish Dragoons. For this game I used three-base units, as I felt that they looked better on the 2' x 2' board. I used the same groundscale as the previous games with distances reduced by a third. 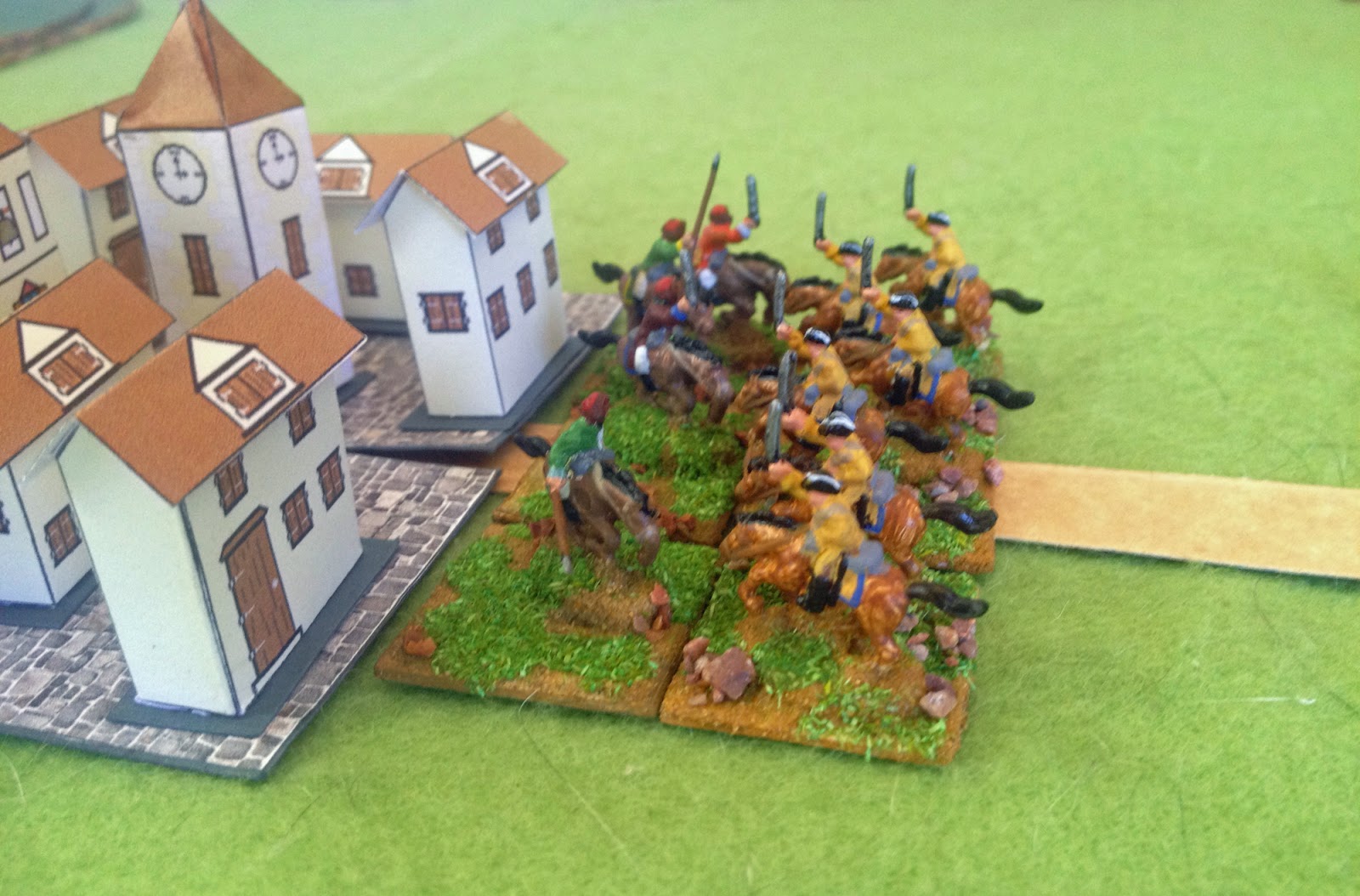 The Russians move into position, moving infantry into the town, and other units into support or reserve positions. 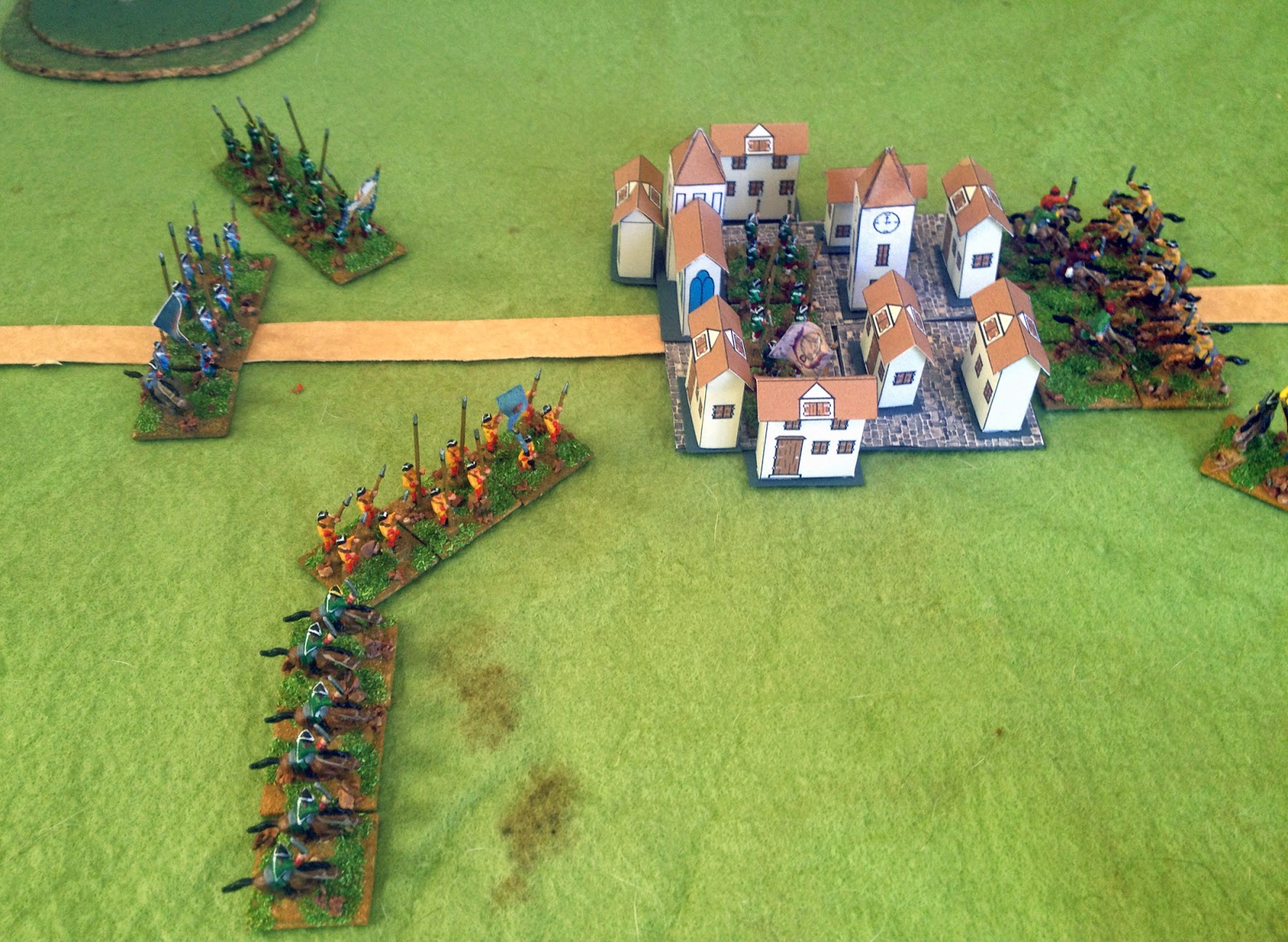 The Swedes also moved into position, covering against Russian flank moves, whilst preparing to assault the town once the cavalry melee before it was resolved. 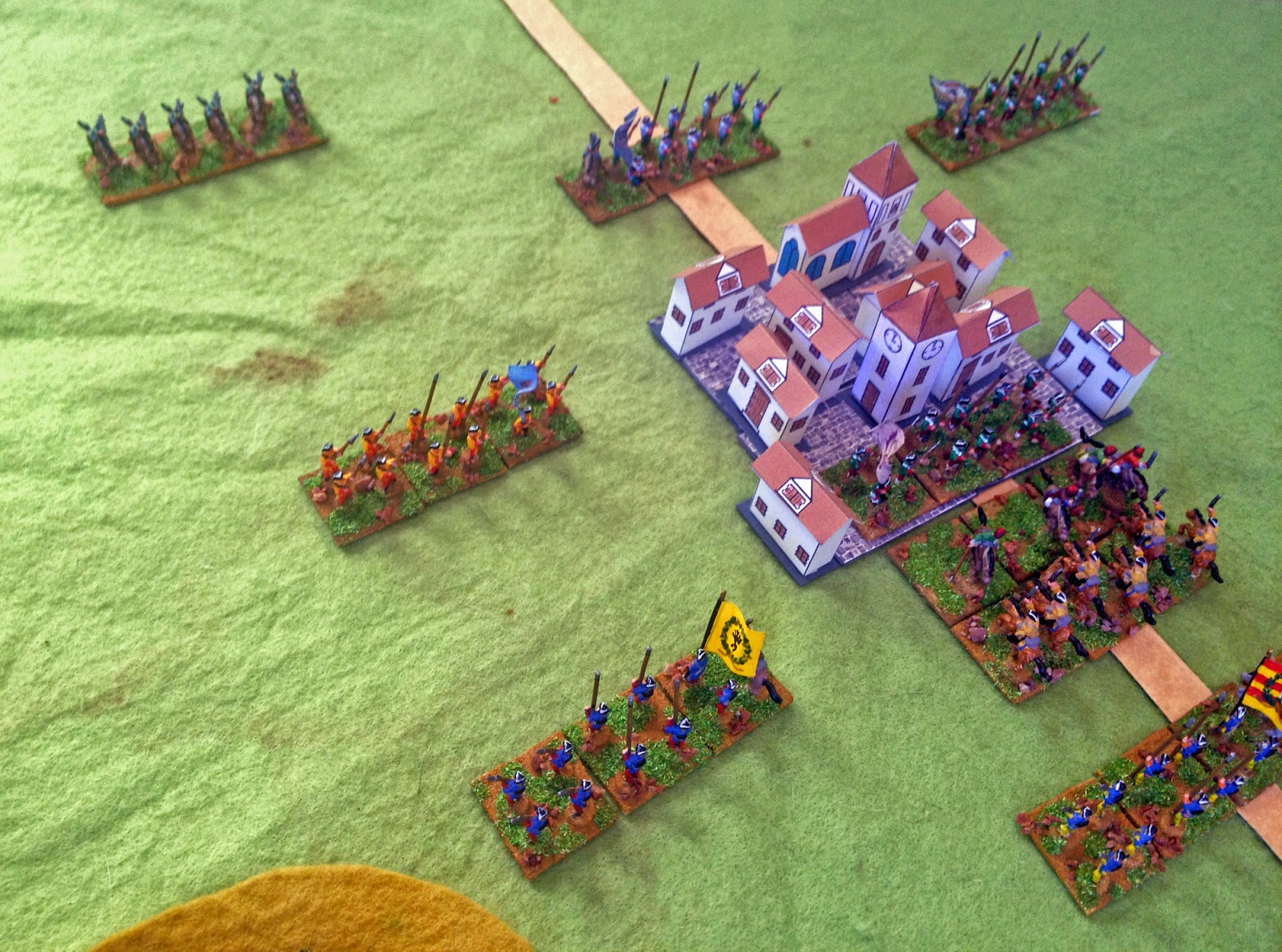 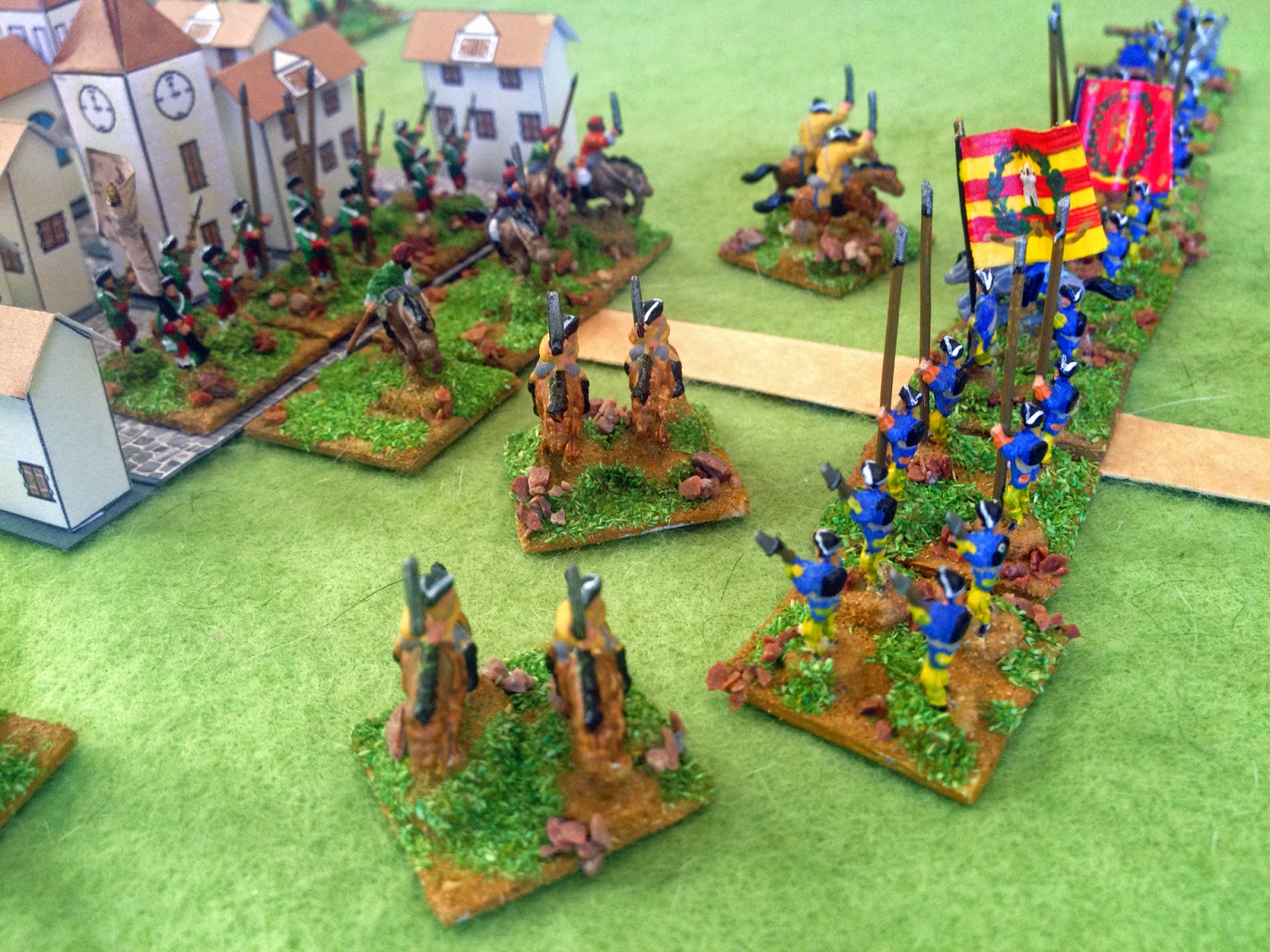 With no retreat open to them, and doomed to otherwise stand in front of the Swedish infantry and be shot to pieces, the Cossacks charged. 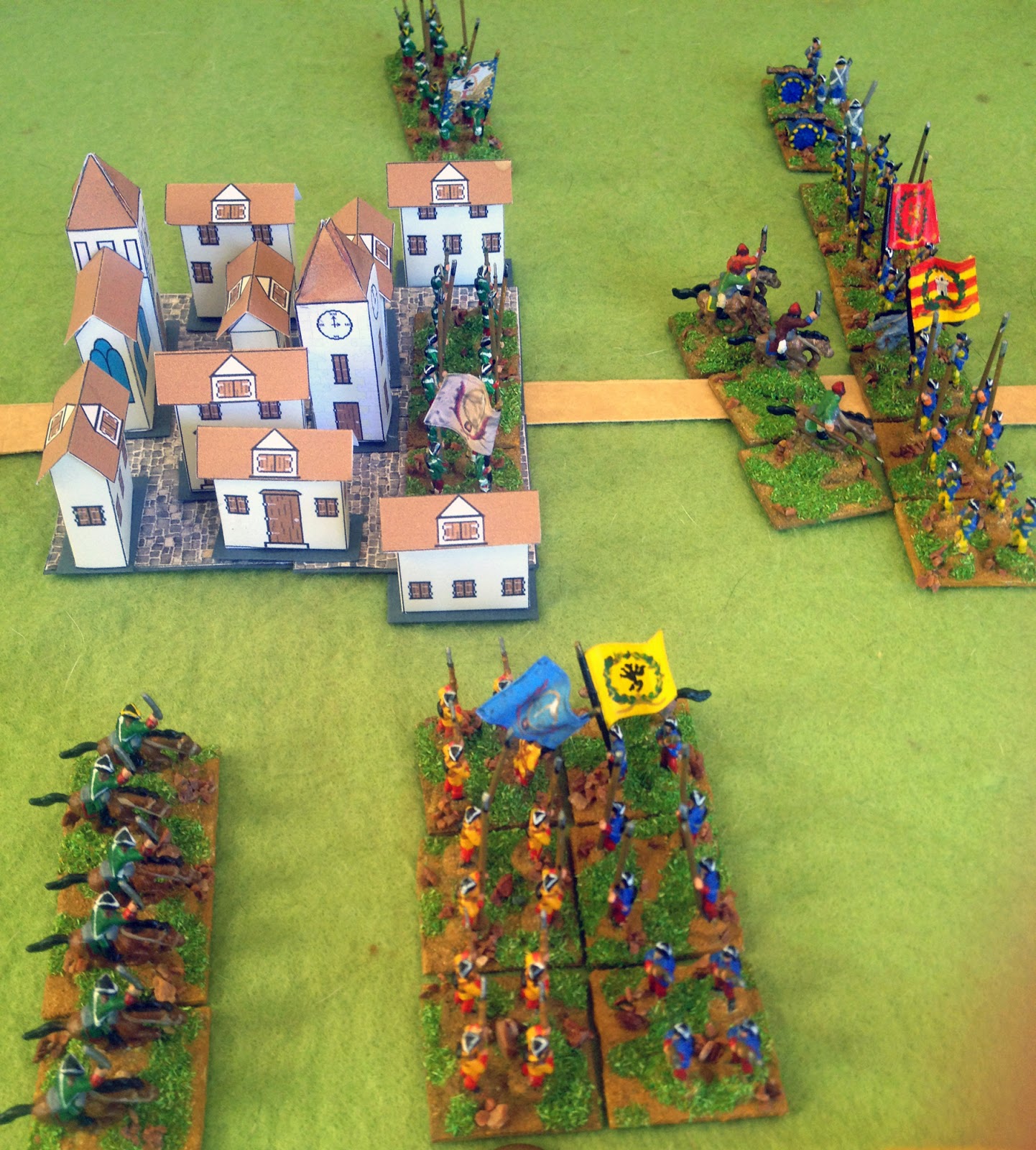 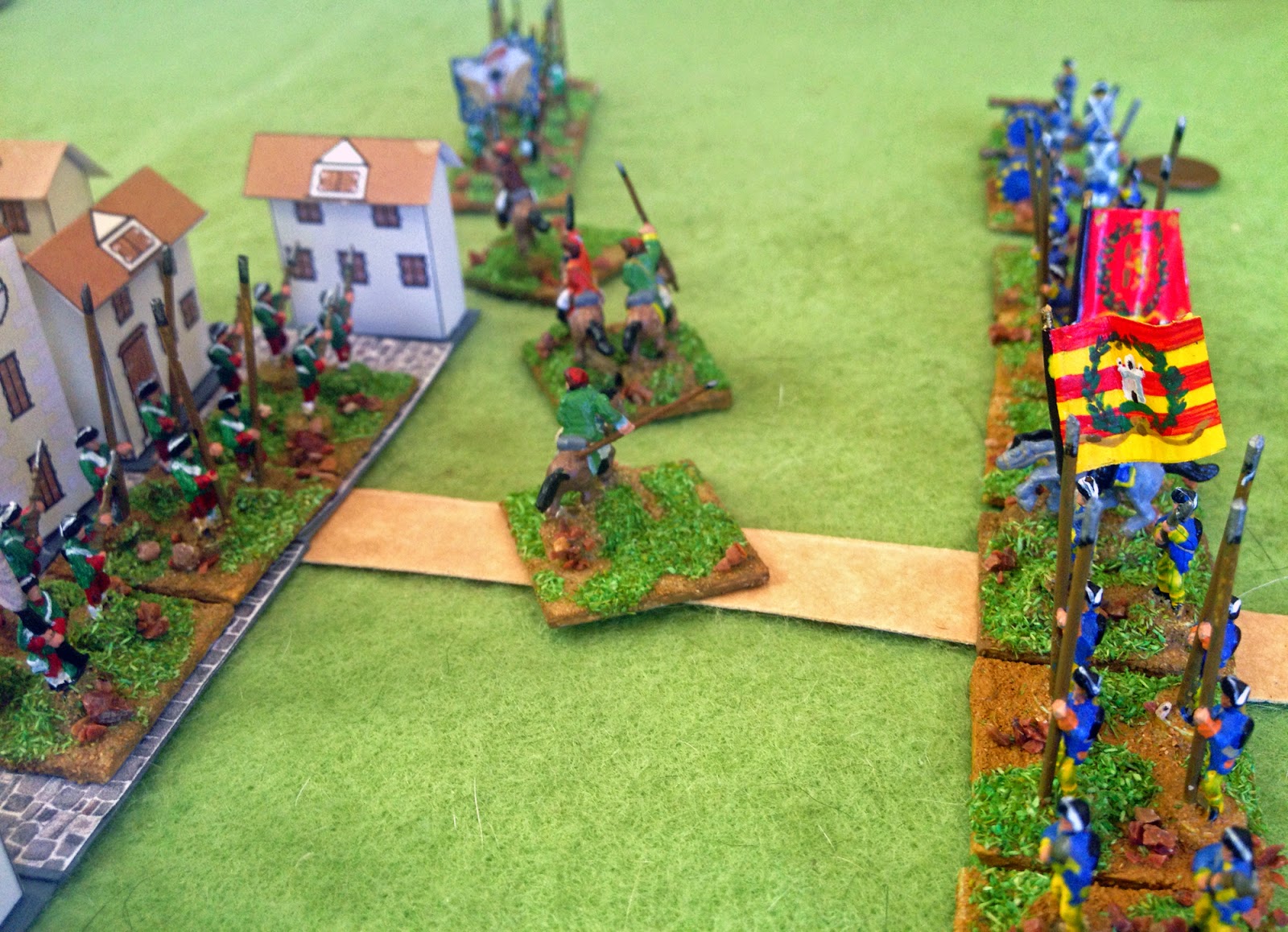 The Swedes pour musketry into the town. 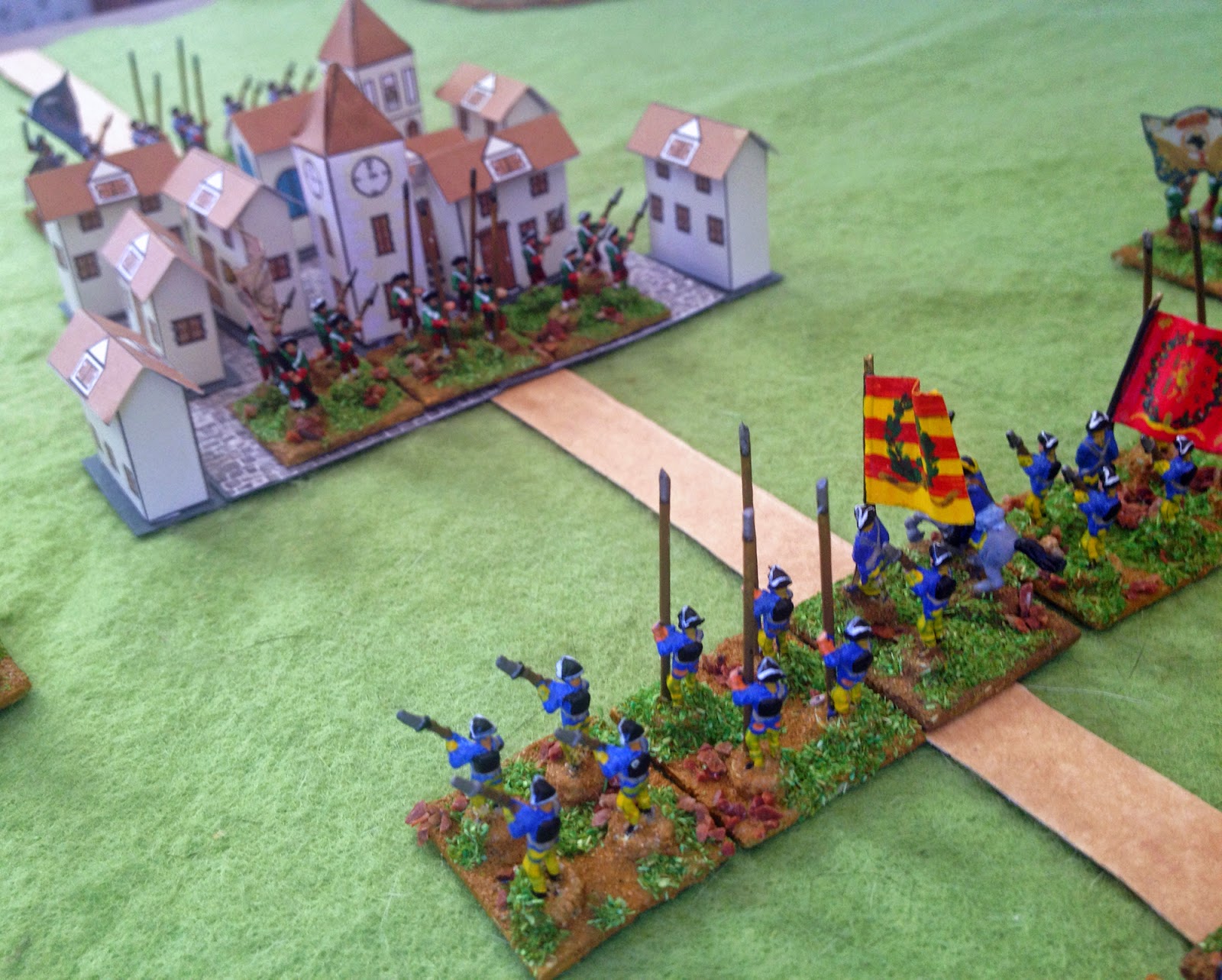 On the Swedish right their artillery came under attack after it ran out of ammunition. I added an extra rule here, allowing an artillery unit that neither moved nor fired on its turn to replenish its ammunition. I'd add the fact that it shouldn't be in close combat as well. 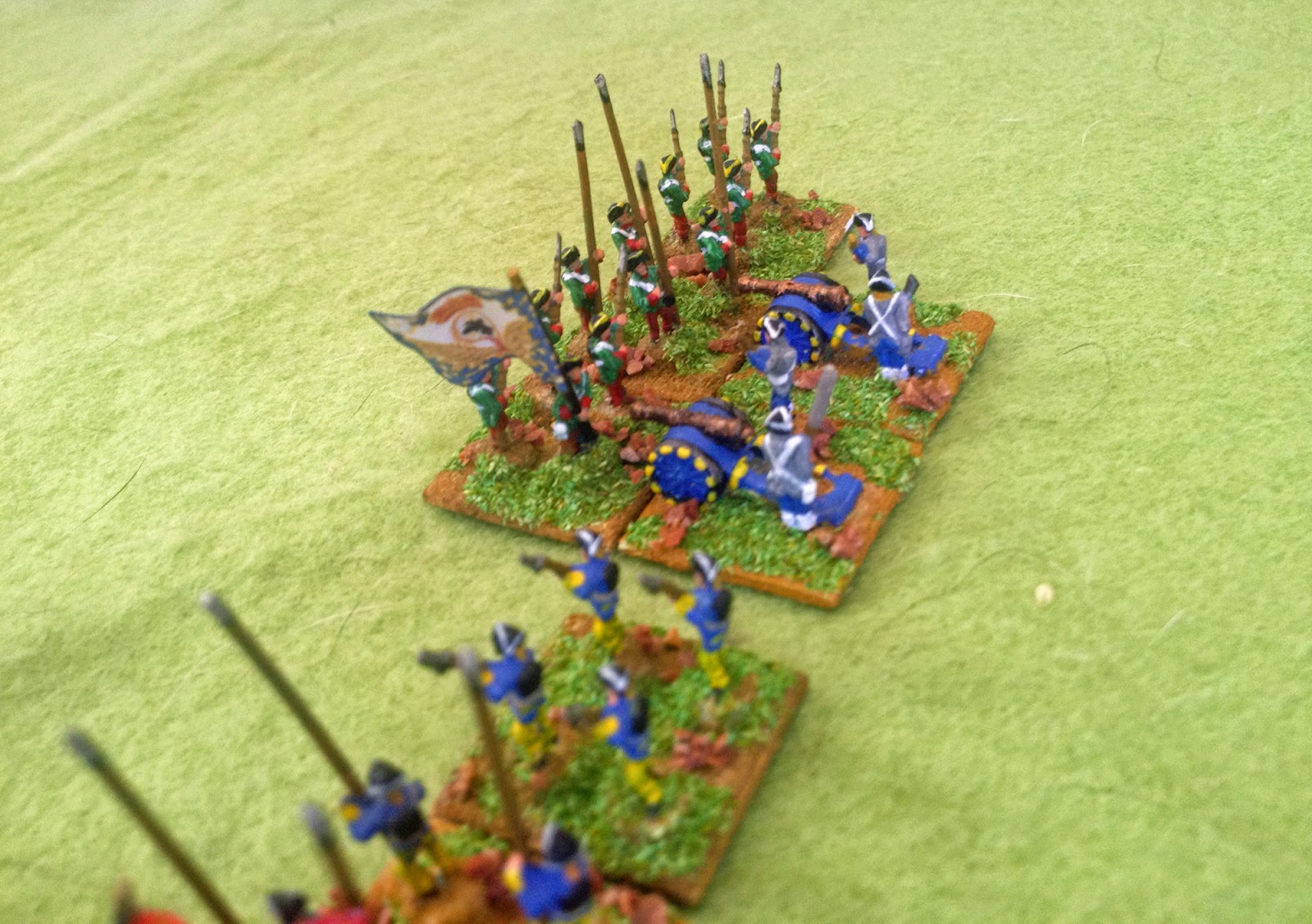 On the Swedish left they routed a Russian infantry unit ... 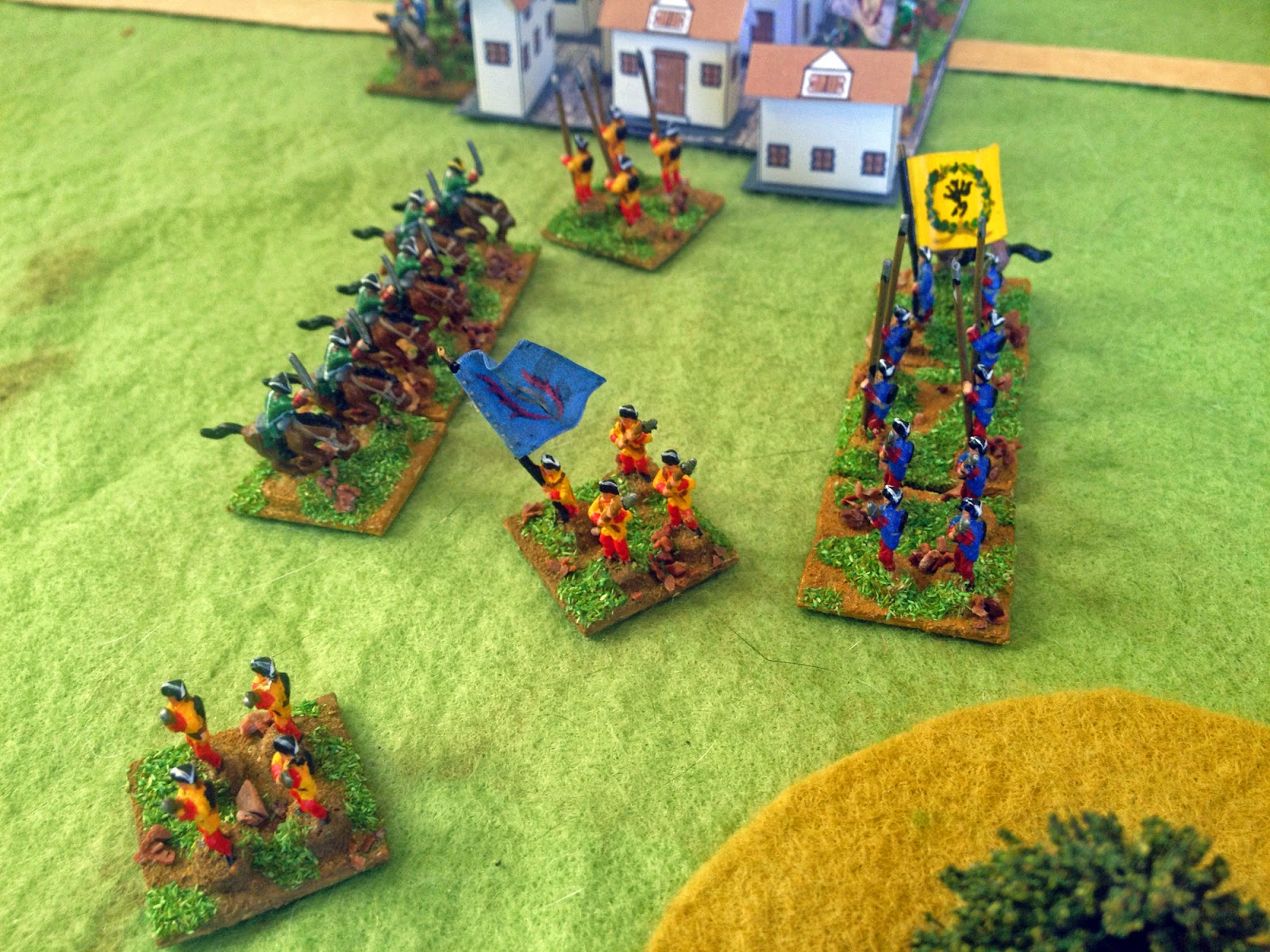 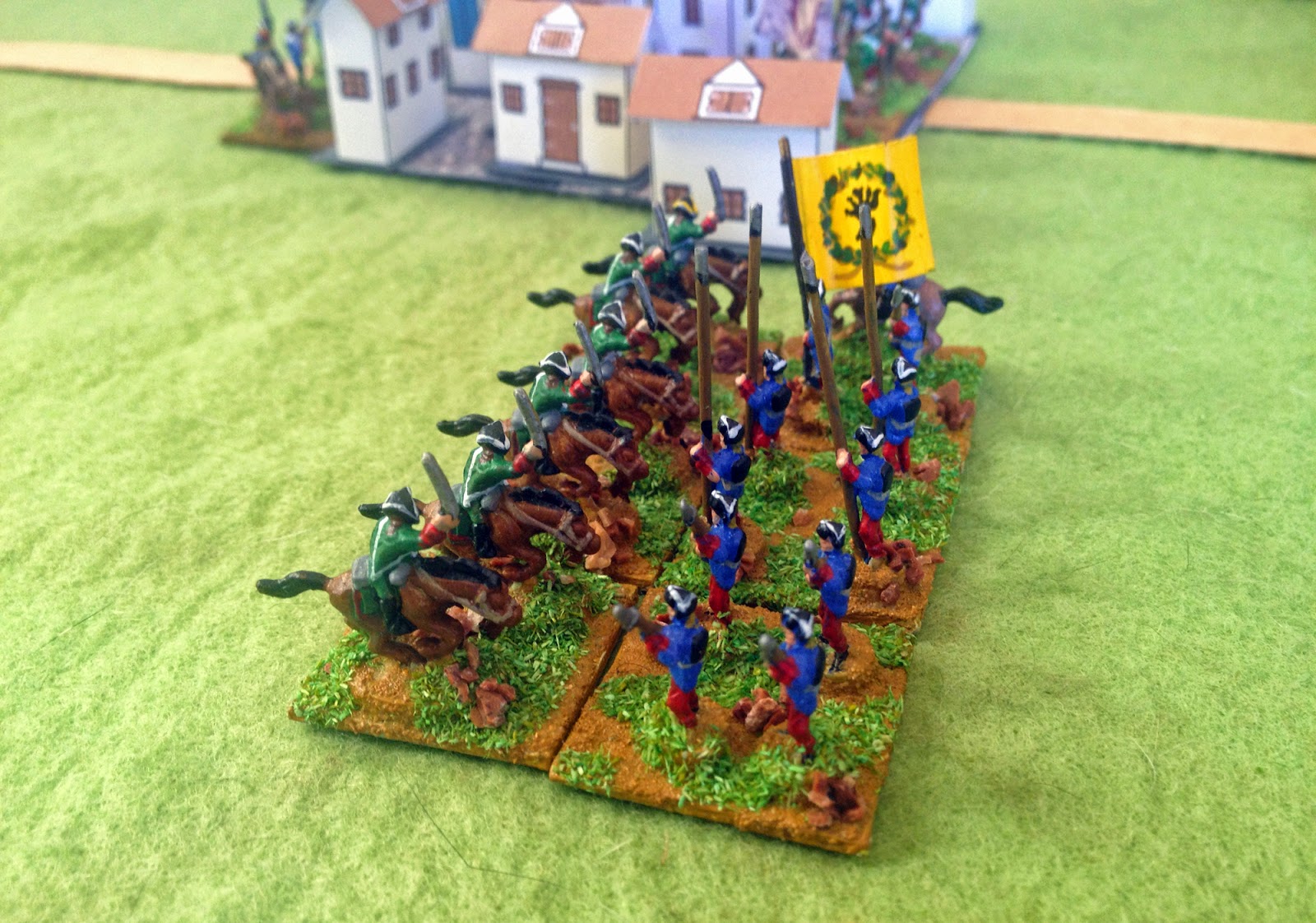 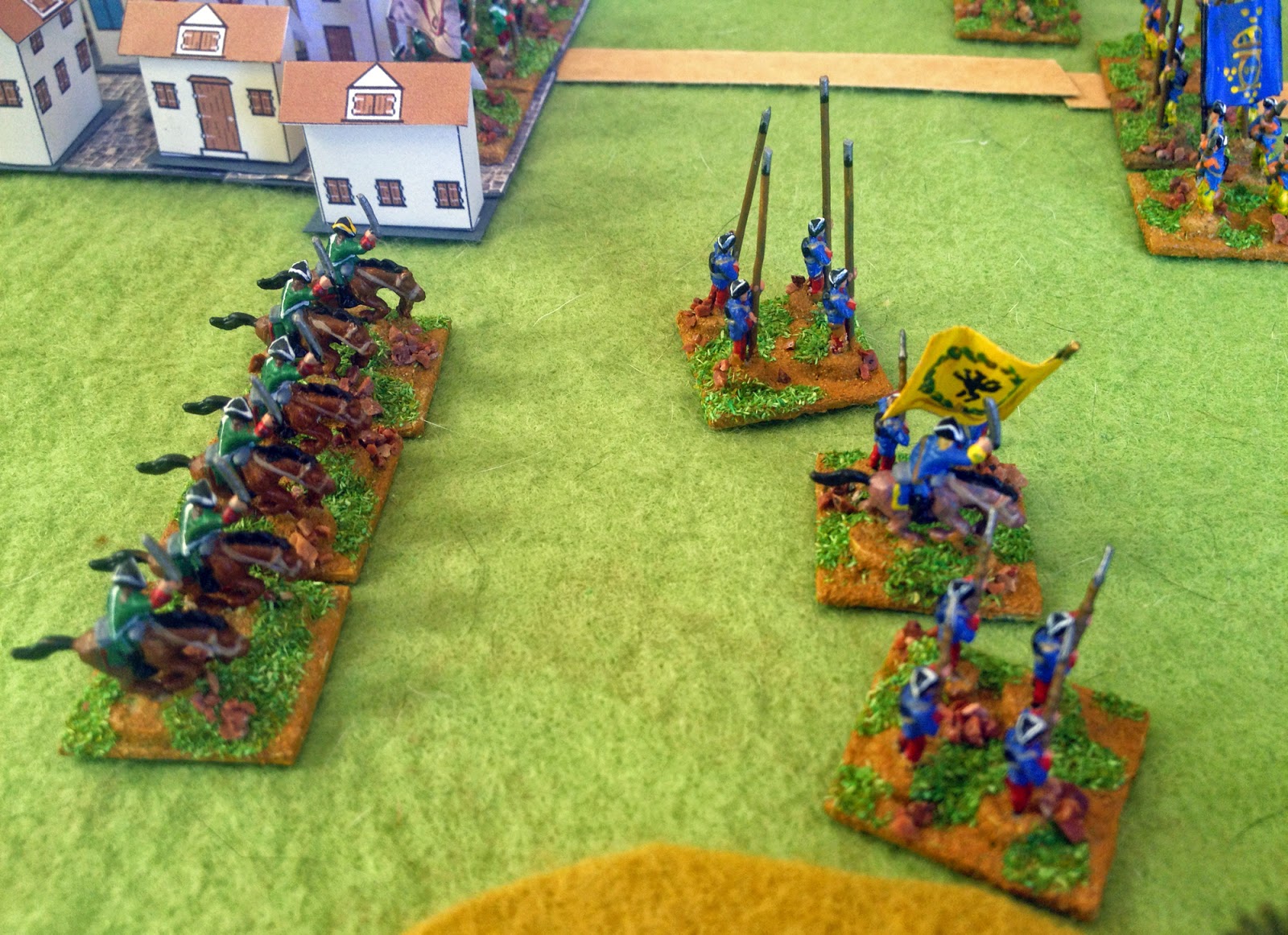 Another Swedish unit broke from fire received from the town, but a reserve unit was in position to replace it. 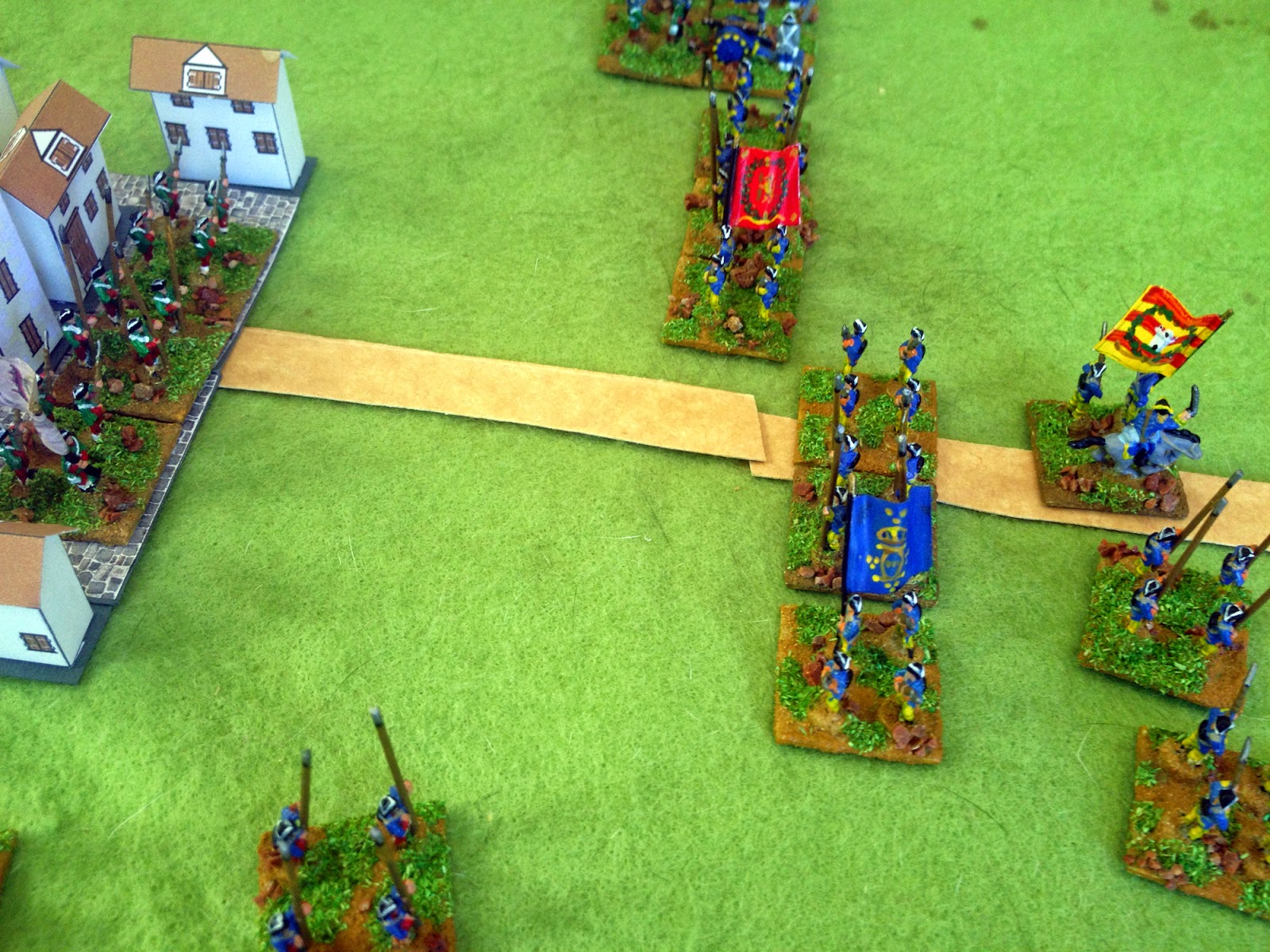 The Russian cavalry kept up the attack. 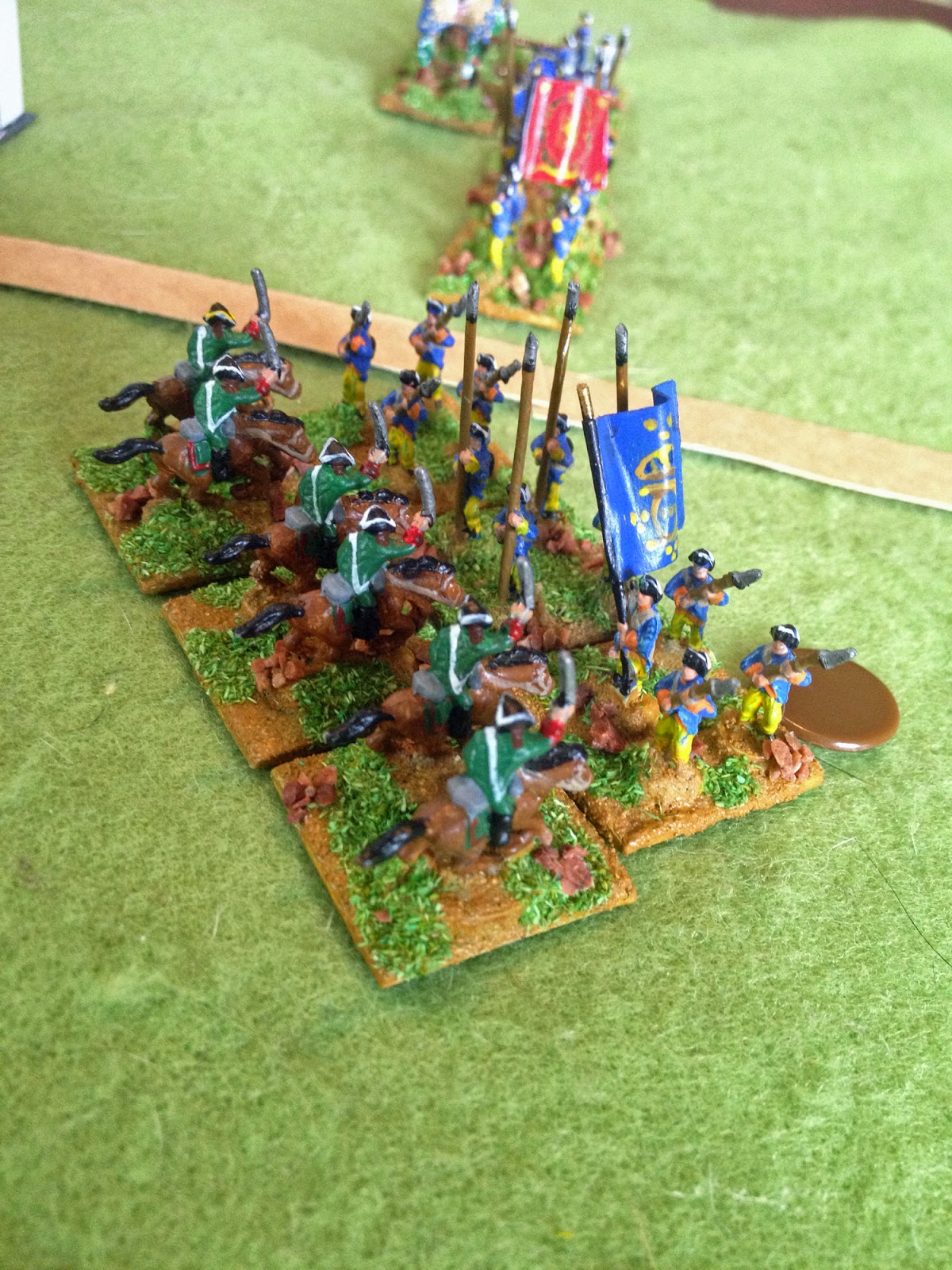 The Swedes assaulted the town, whose defenders put up a bold defence. 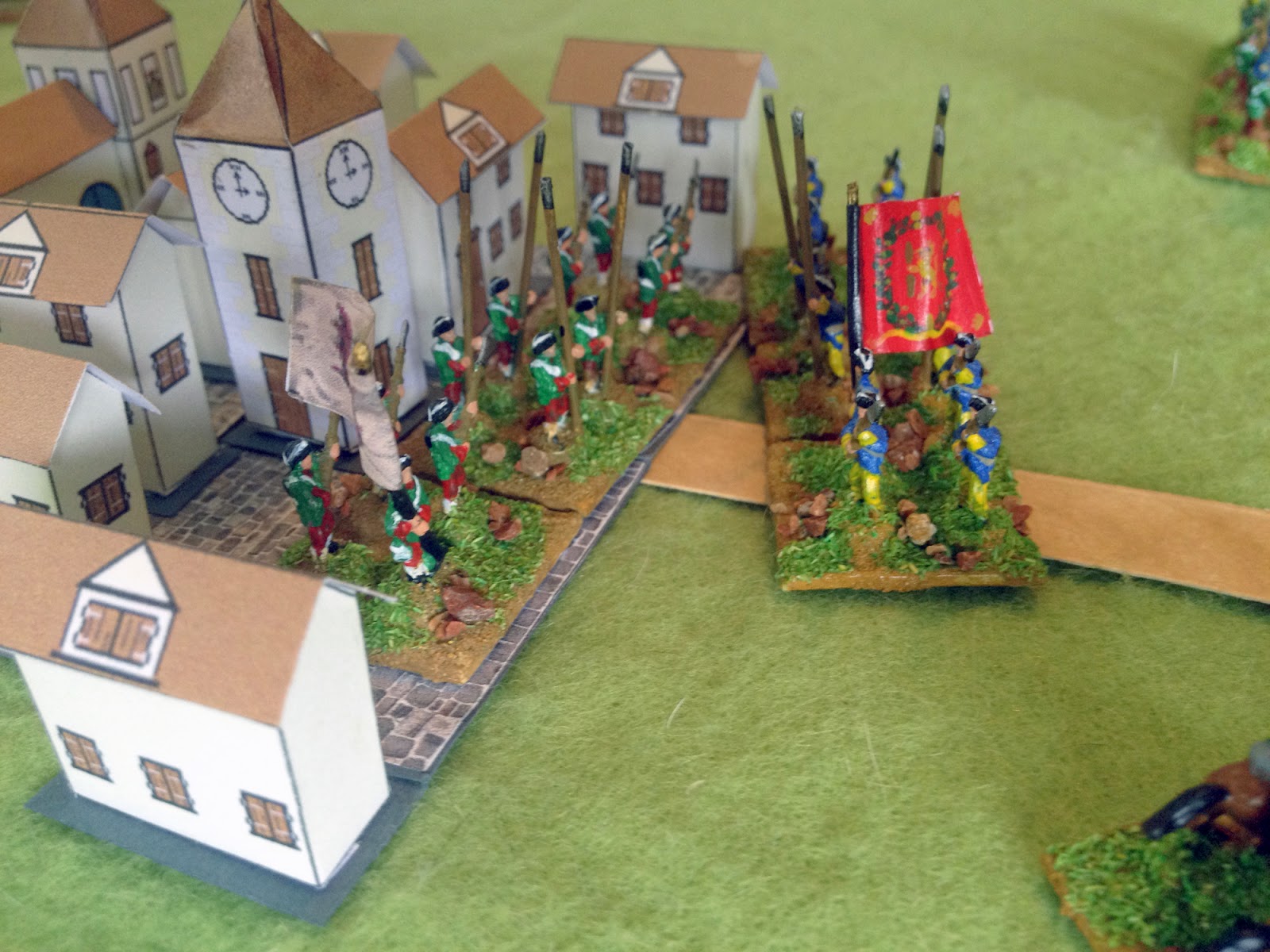 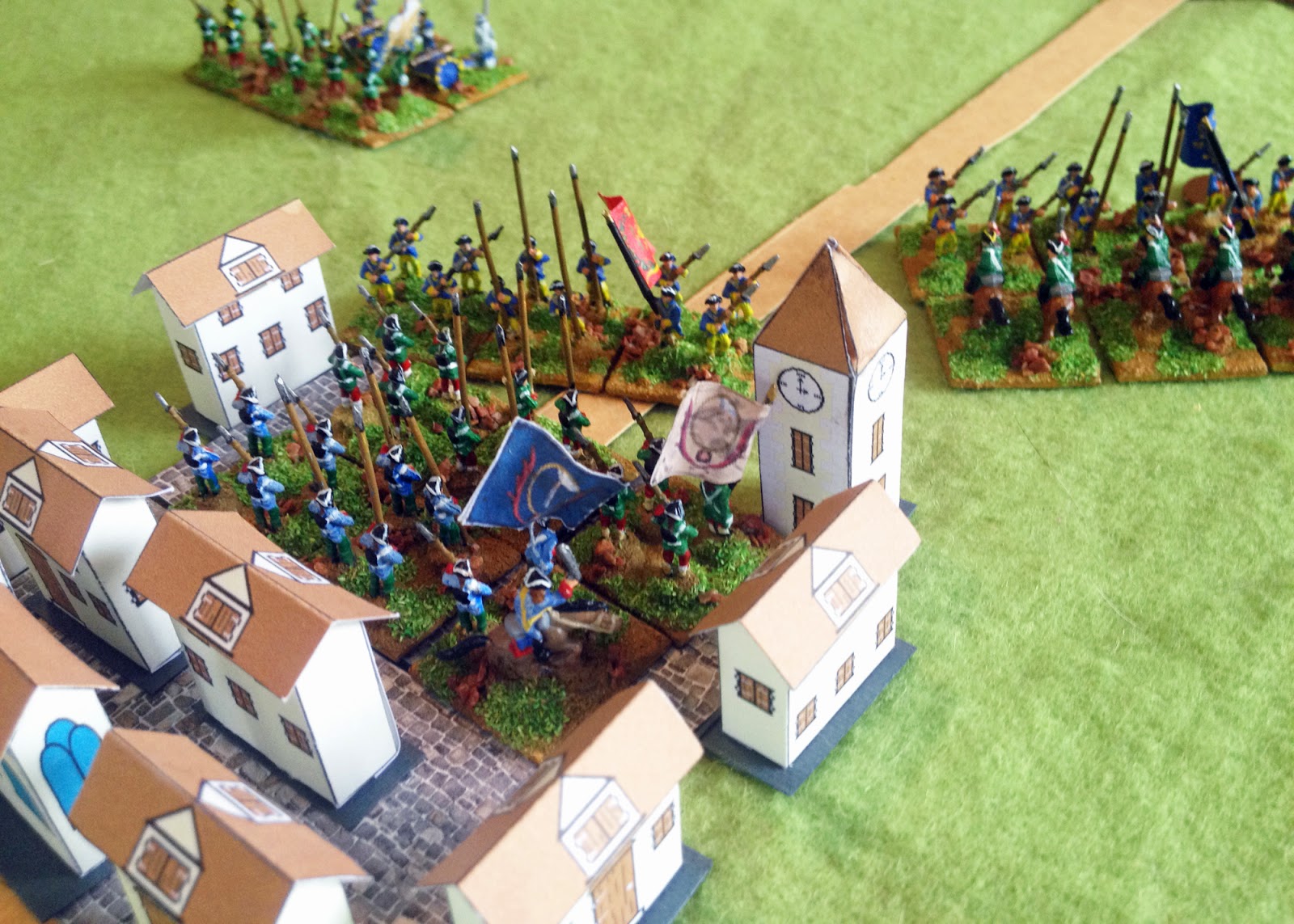 A good job, as the first unit flee back, dispersed by the Swedish assault 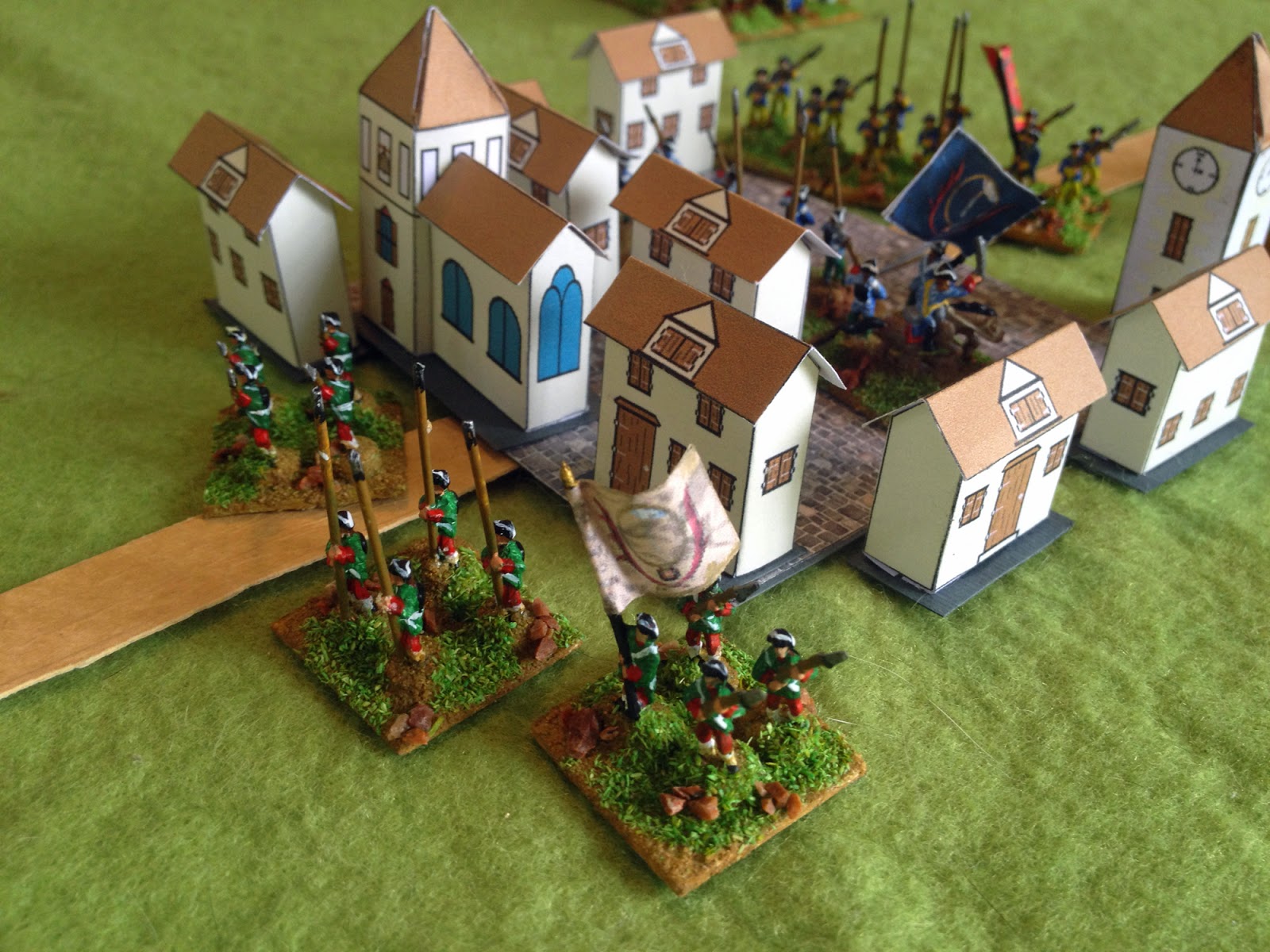 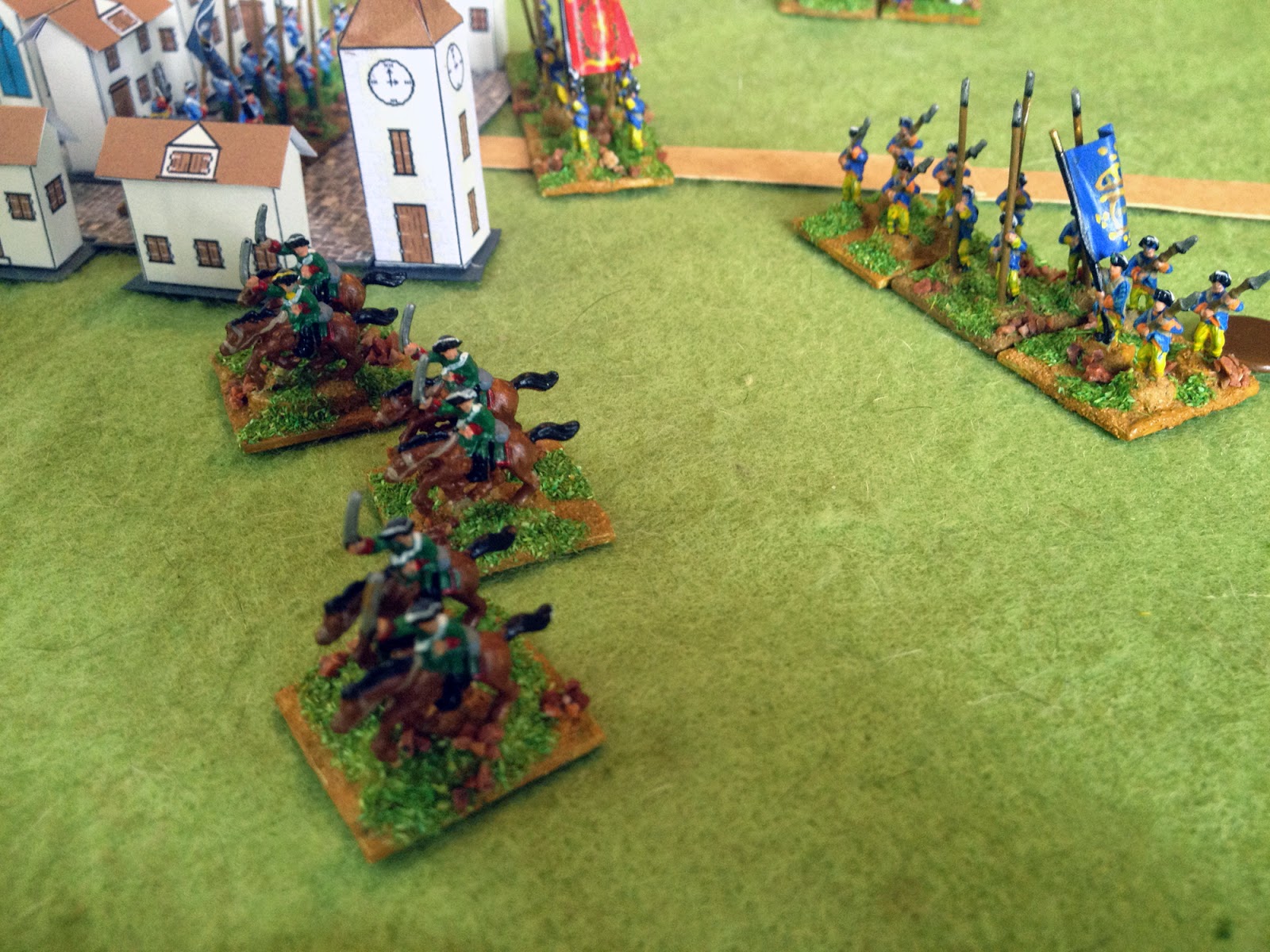 The Swedes continued to press their attack, but they were now fighting a fresh enemy unit. 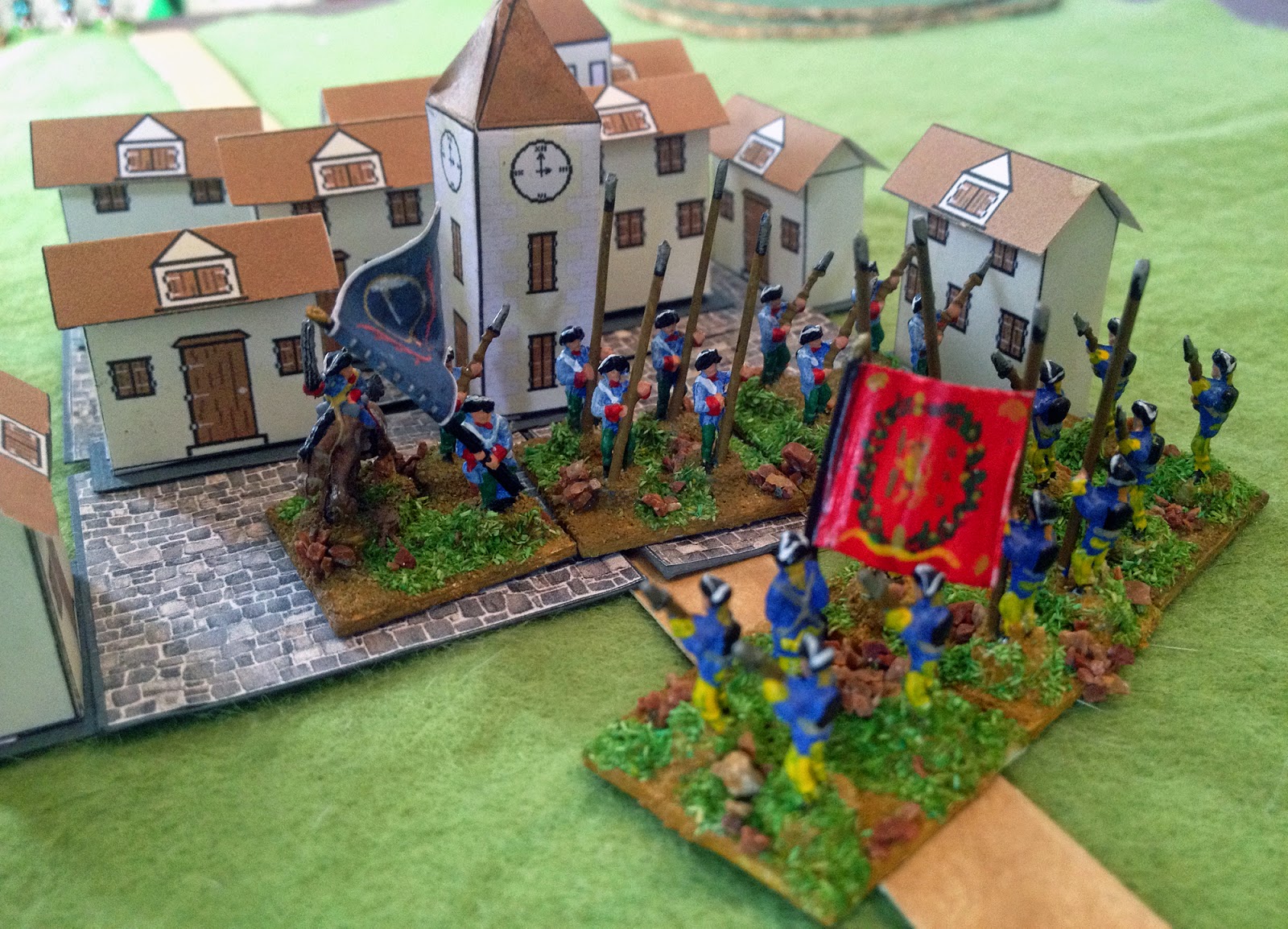 The Swedes ran. In the background some Russian infantry was, after far too long, finally finishing off the Swedish artillery. 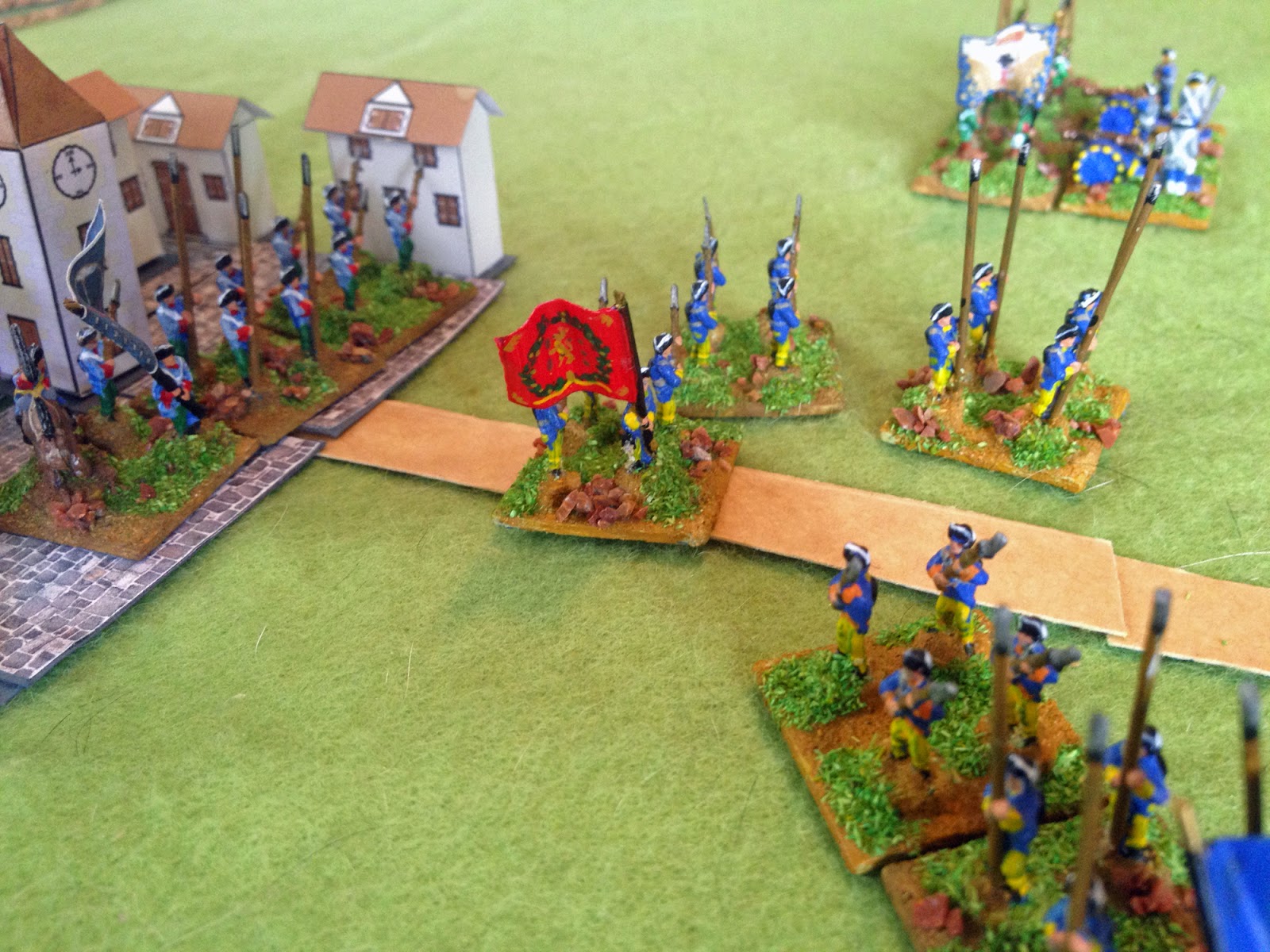 Only one Swedish unit was left now, and into the town it went. The Russians held attack after attack, and the victorious artillery killers were on their way in support. 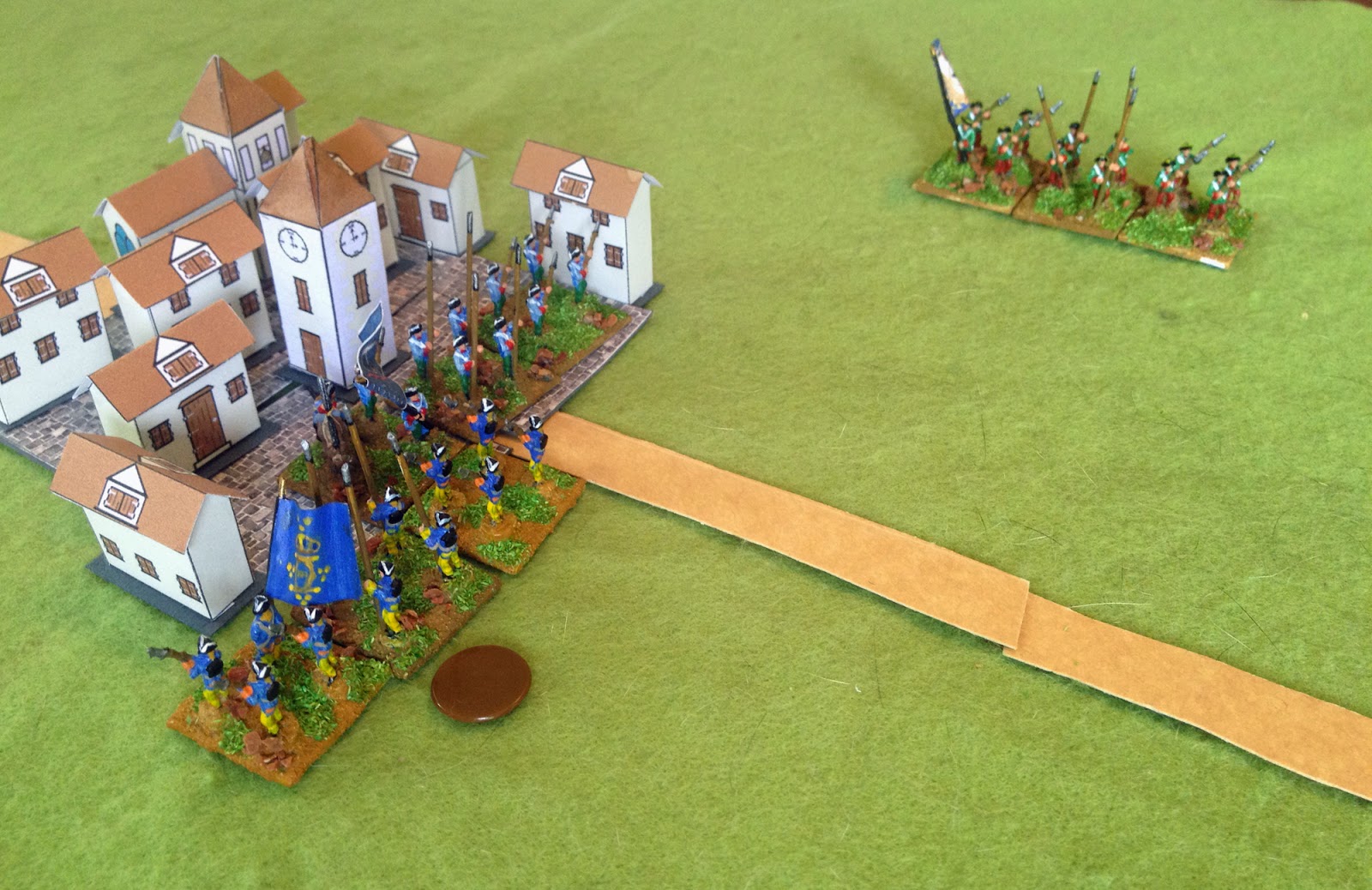 On Turn 13 the final Swedish unit broke, giving the Russians a victory. 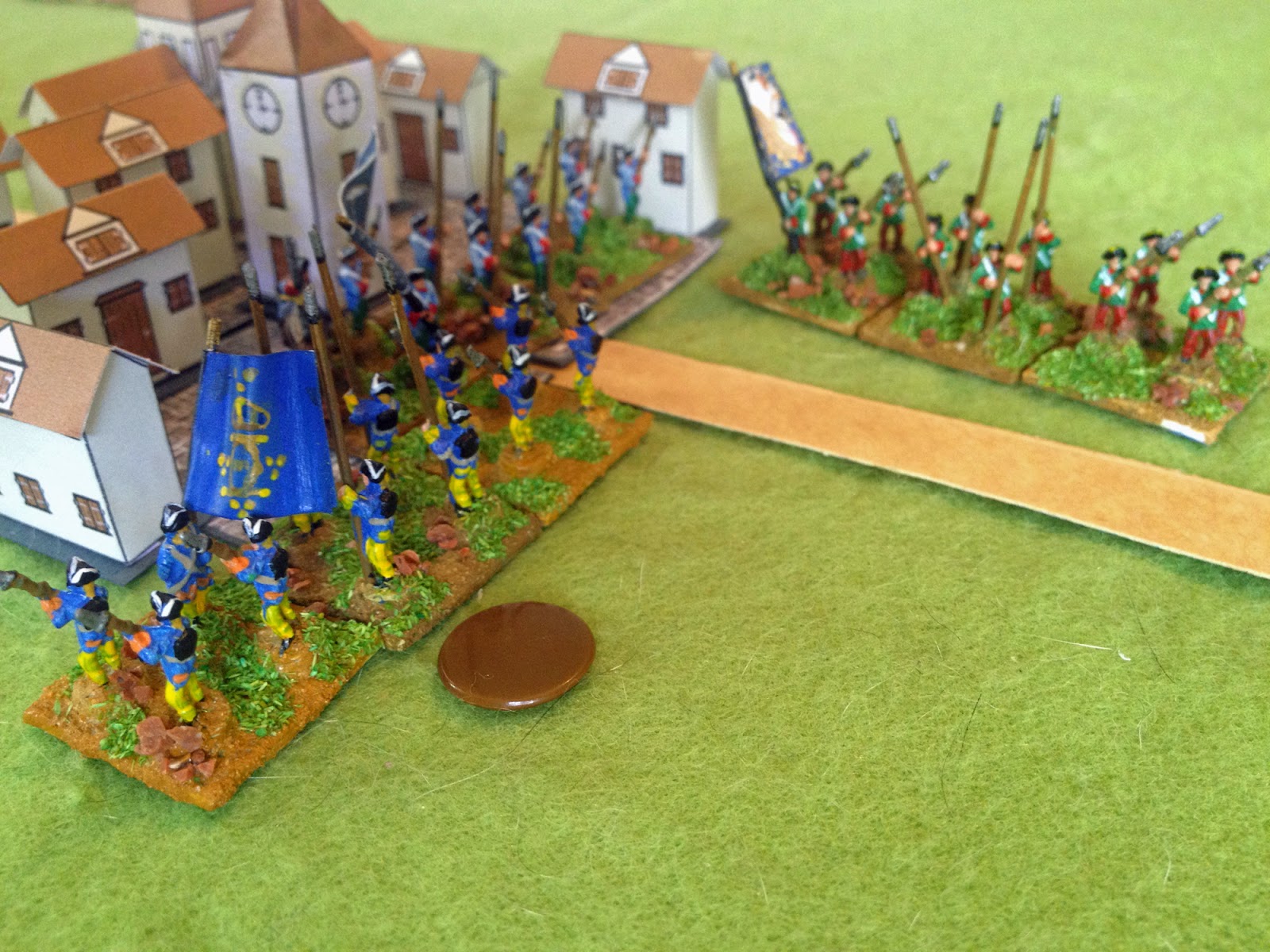 I found this a far more satisfying game than the one yesterday, with the extra 'chrome' added to the rules making for a more playable game with no real additional complexity. They still have the issue that, when used with the scenarios, the games are really decided well before the scenario time-limit. This game went to 13 of the 15 turns, it's true, but by about turn 9 or 10 it was really obvious that, barring a major run of appalling Russian die rolls, the Swedes weren't gong to win. I can't see how the rate at which units were lost could be slowed down, so the time restriction was never really going to be an issue. I do like the idea of some kind of rallying mechanism, where unengaged units can roll to recover lost hits, which may keep them in the fight a little longer. But it would have to be very simple.

Anyway, I may try another random scenario tomorrow, using this variant set.
Posted by Kaptain Kobold at 21:54