One Hour On A Square Grid 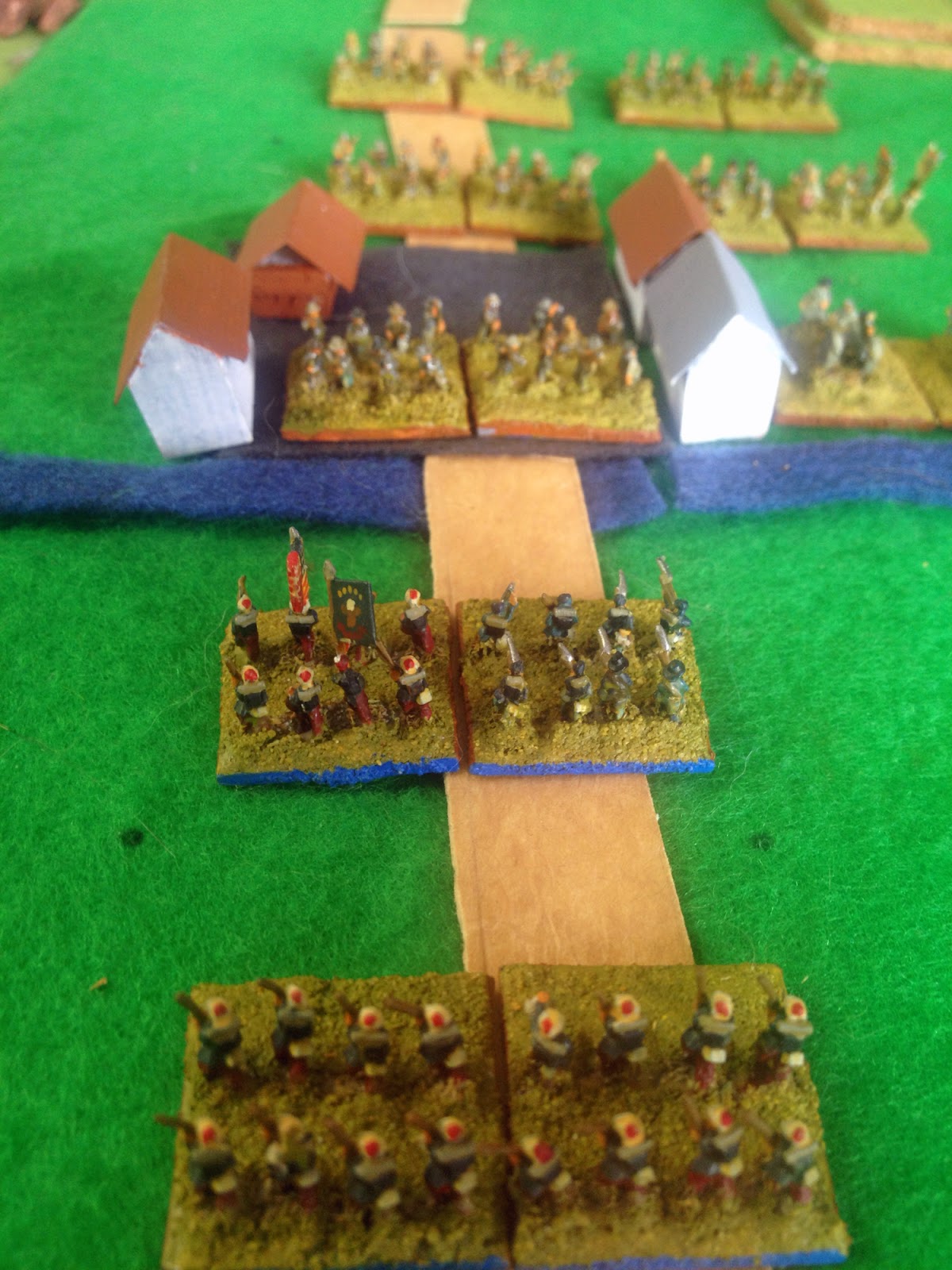 I promised myself that I would try out some of the scenarios in 'One Hour Wargames' using rules other than the ones in the book. The simplest option was to try the basic square-grid rules I play around with from time to time. These are designed for ACW games more than anything else, so I broke out the 6mm armies again.

I decided to play as close to the 'One Hour Wargames' setup as possible in terms of army sizes, and in fact the square-grid rules work OK at those unit densities - most scenarios have six units a side, with a few giving one side only three or four. In addition it was easy enough to use the 'One Hour Wargames' unit types, so I could use the random army generator table as well - this would give armies composed of Infantry, Cavalry, Artillery and Zouaves, which is the author's catch-all term for veteran/elite infantry. I'll call them Veterans.

The first scenario I rolled was 24 - Bottleneck. An attack must be made up a road against a numerically inferior defender. But the road passes between a wood impassable to the attacker and a swamp impassable to all units. The attacker must clear the road, but, in a neat twist, only defending units in the open count as blocking it. Thus the defenders can use the woods to make the attacker's job harder, but units hiding in the woods don't help them win directly. 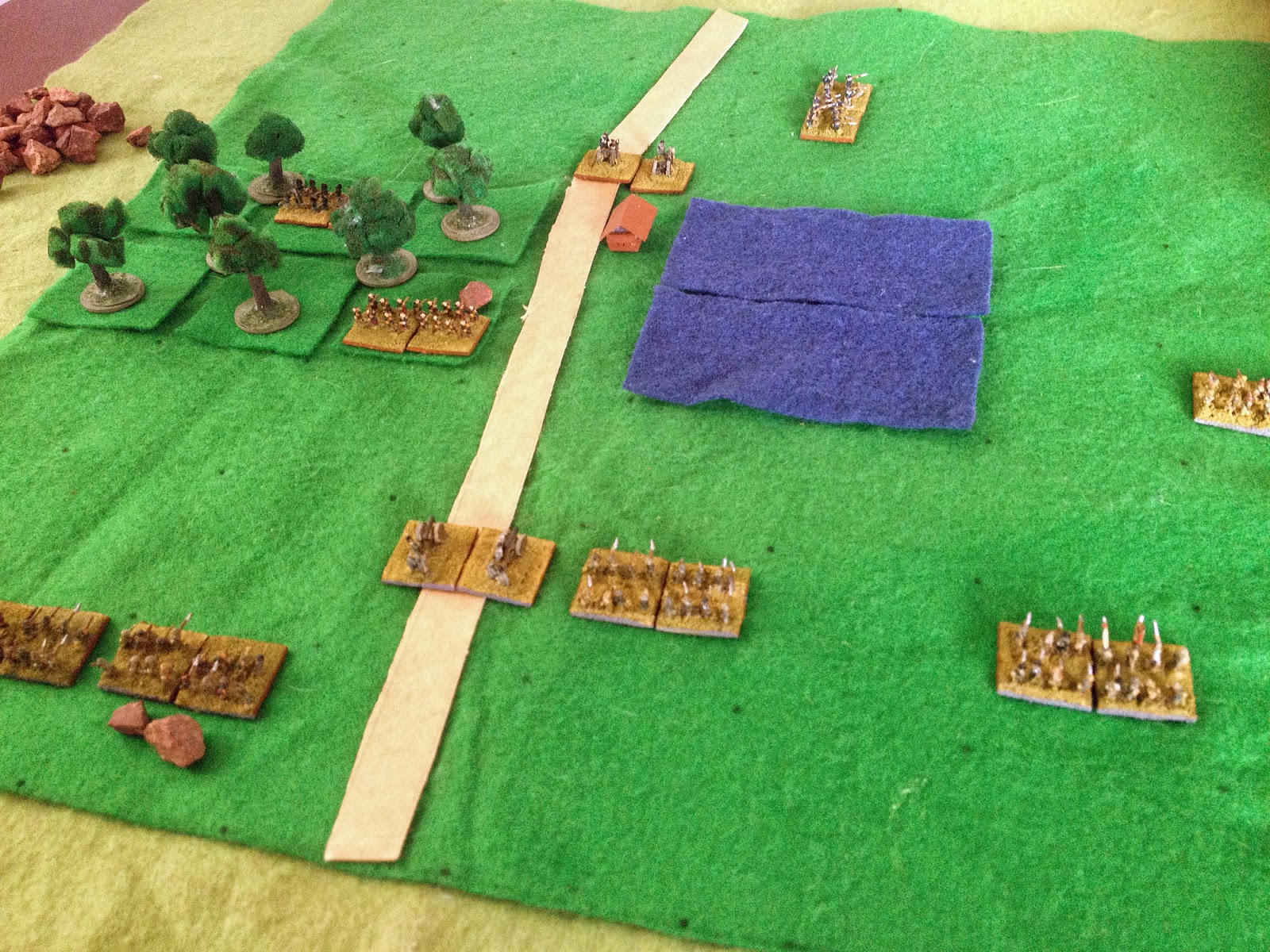 The Union defended the woods against an attack up the road, whilst the Confederates sent the Veteran units in a wide sweep around the swamp. This sweep was successful in clearing Union units beyond the wood, but the Union nearly stymied the Confederate plans when one of the units defending the woods emerged towards the end of the game to contest the road. Unfortunately it was forced to retreat, and the Confederates just clinched a win. 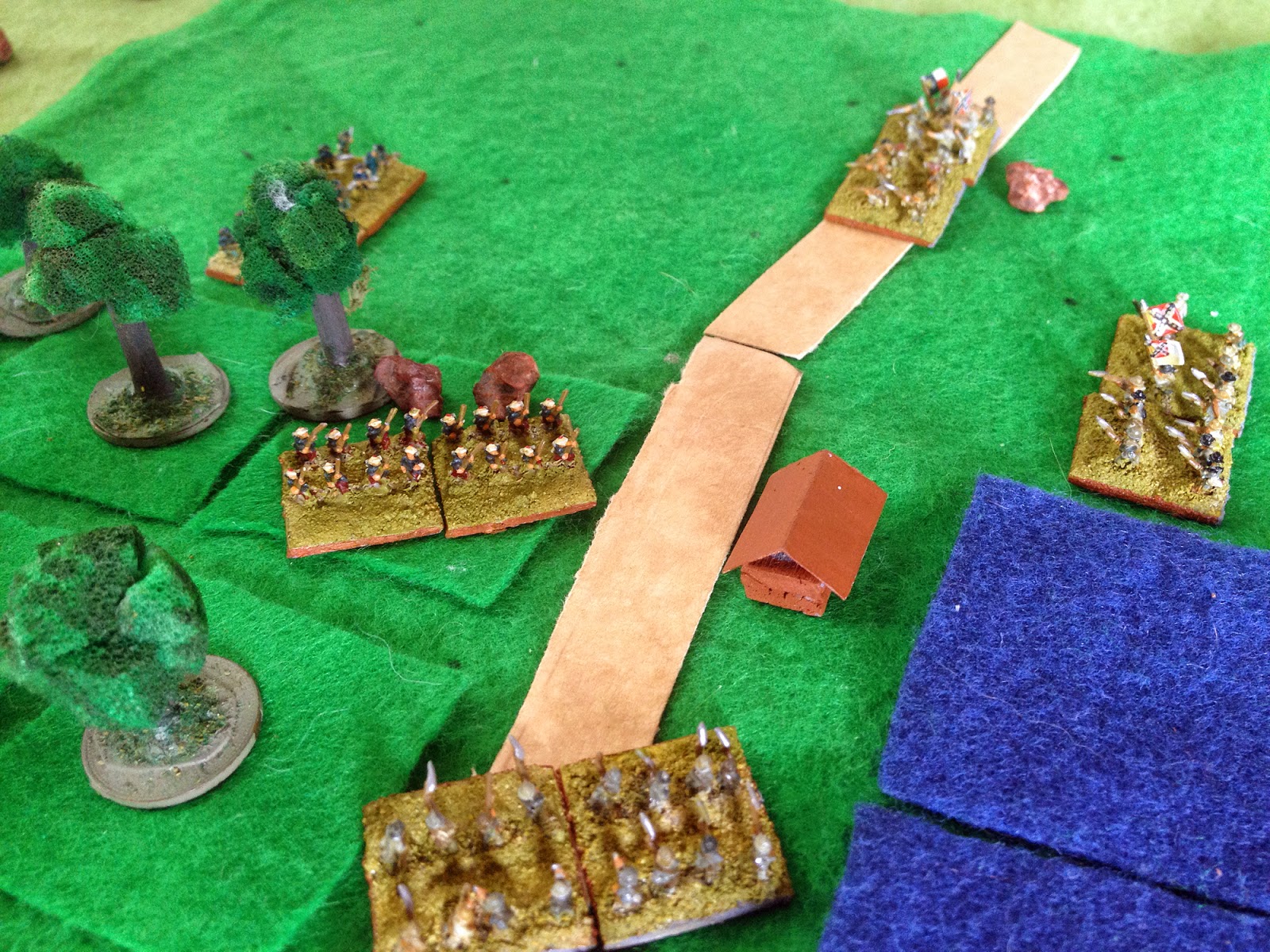 I then randomly determined another scenario and got 12 - An Unfortunate Oversight. In this one army is defending a town which covers a bridge over an otherwise uncrossable river. Uncrossable, that is, aside from the undiscovered ford out on their left - which the attackers have just found. Victory is about controlling the hill in the defender's rear. 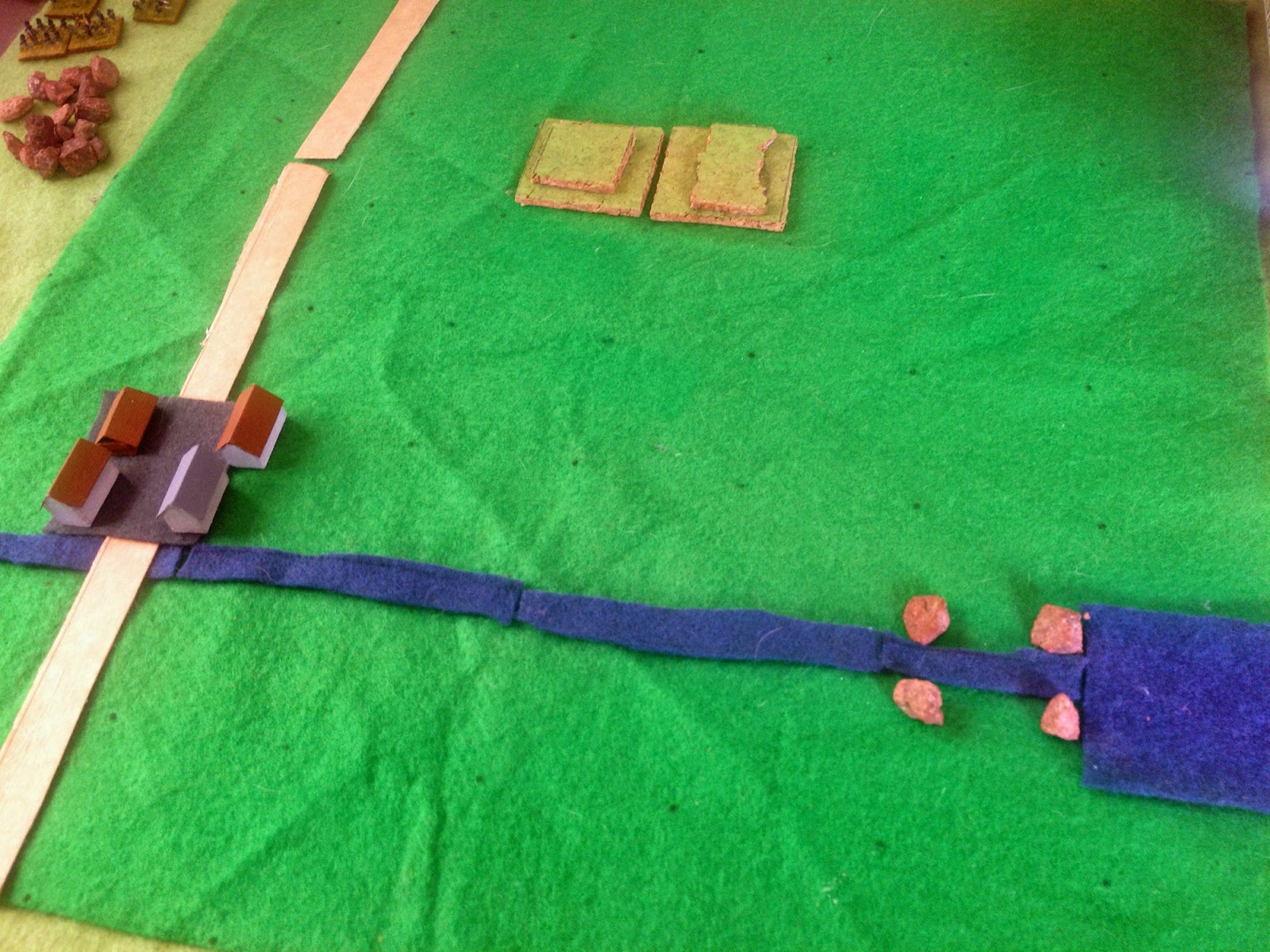 The Confederates were defending with one Veteran infantry, four Infantry and an Artillery, whilst the attacking Union army was similar, but had an extra Veteran infantry unit.

Whilst the infantry was sent over the ford to seize the hill. 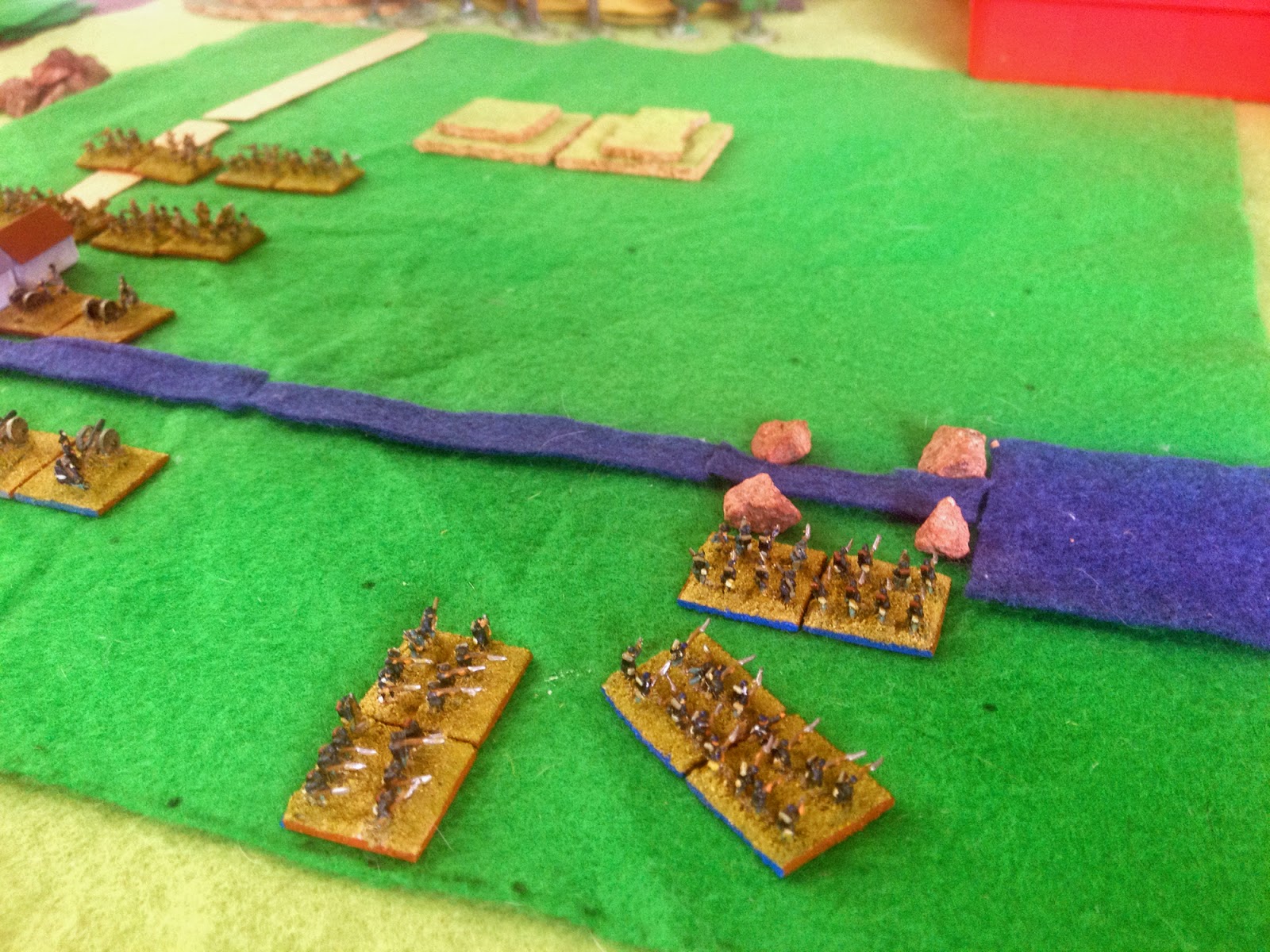 The Confederates moved units to counter the flank march. 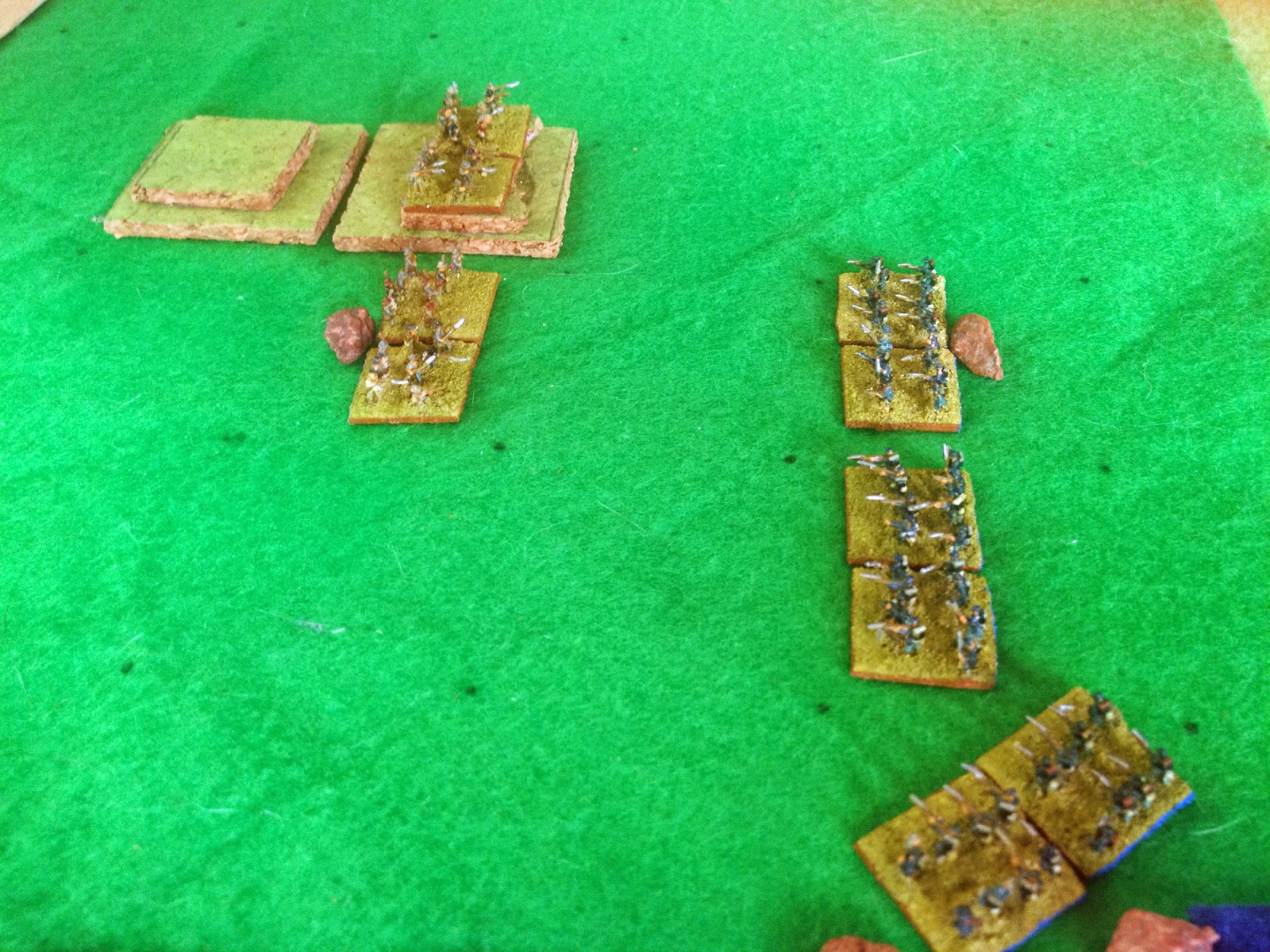 The attack on the town wasn't pressed with much enthusiasm. 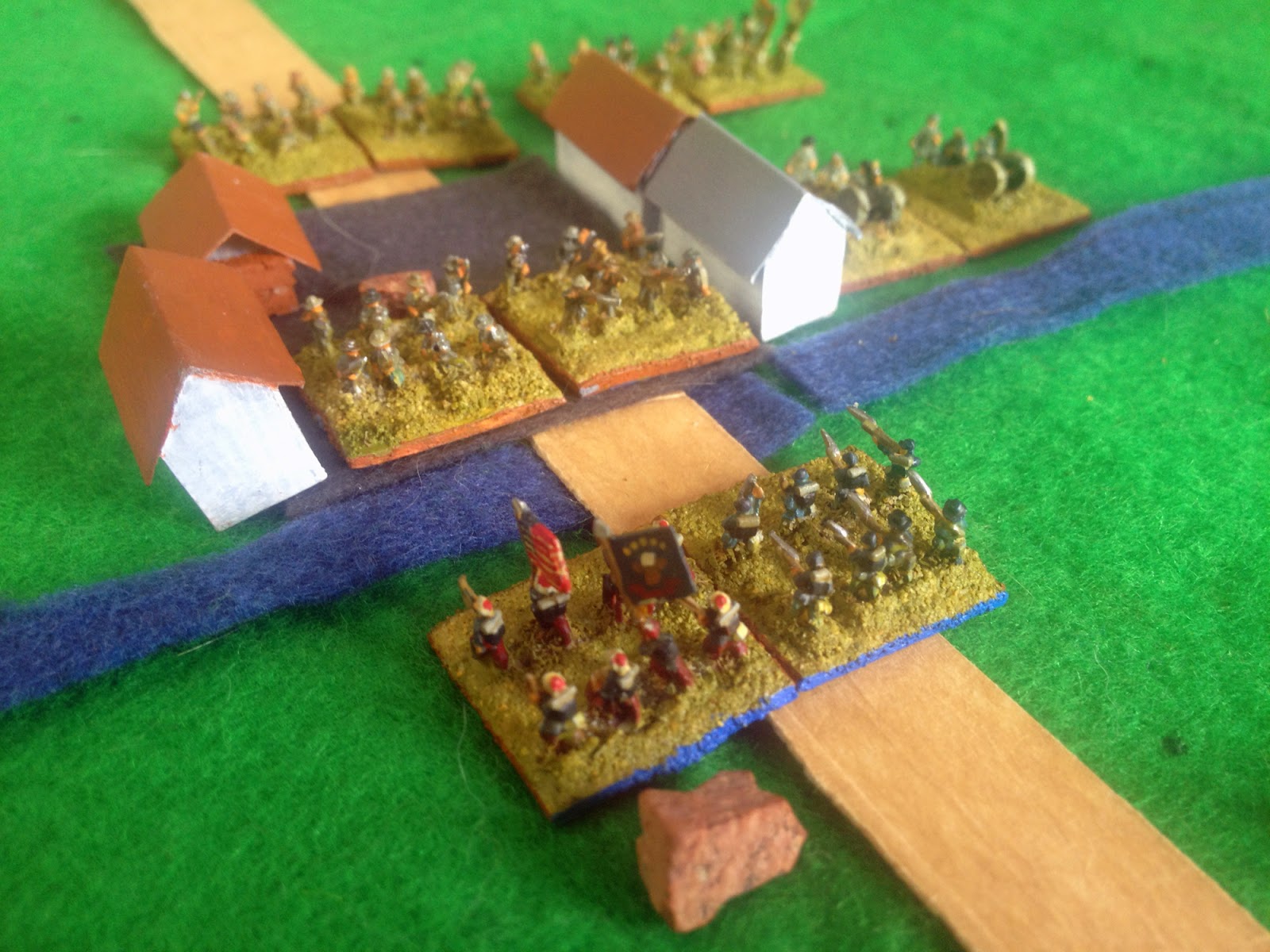 The battle continued on the Union right, with honours going mostly to the Confederates. 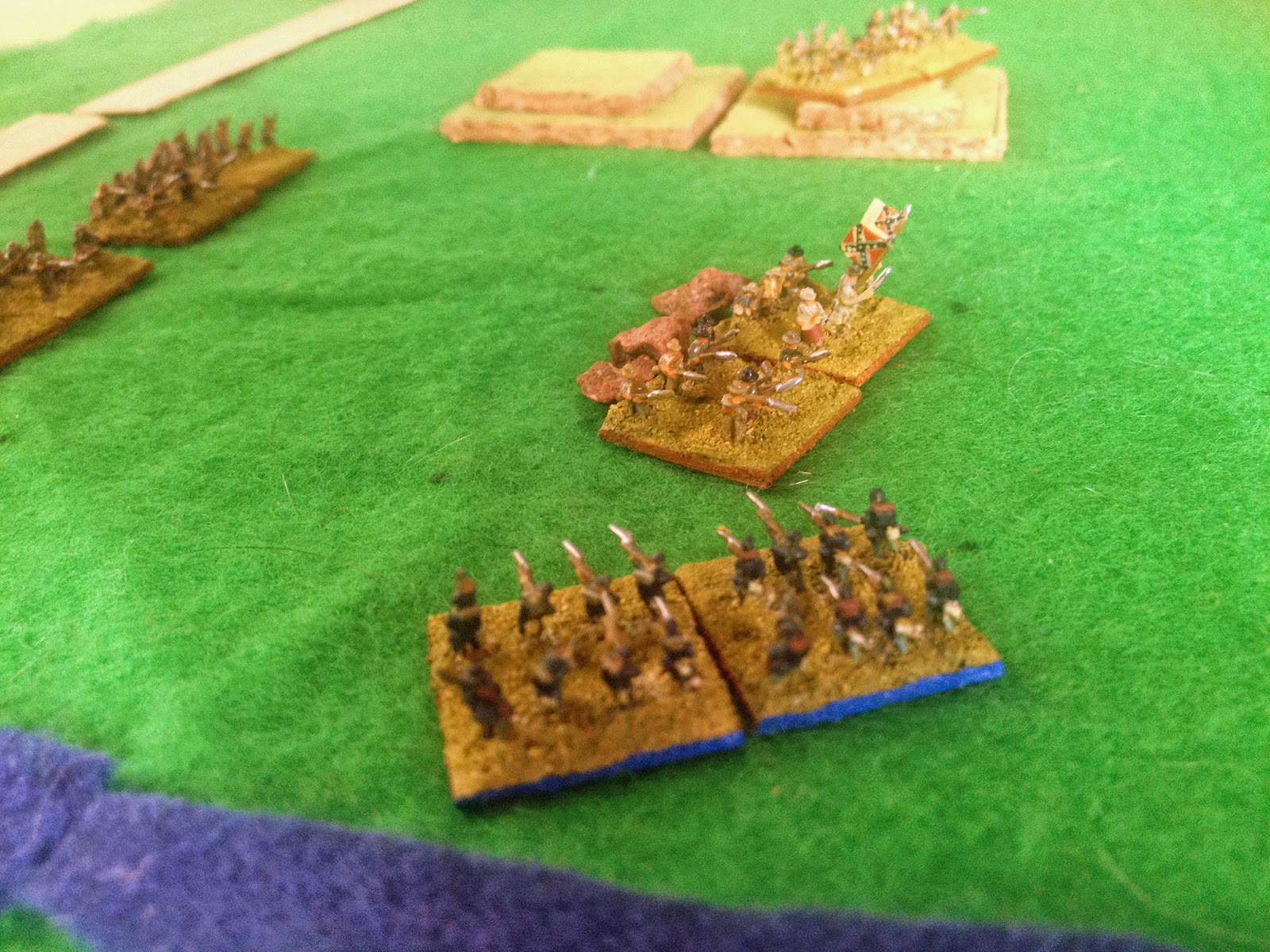 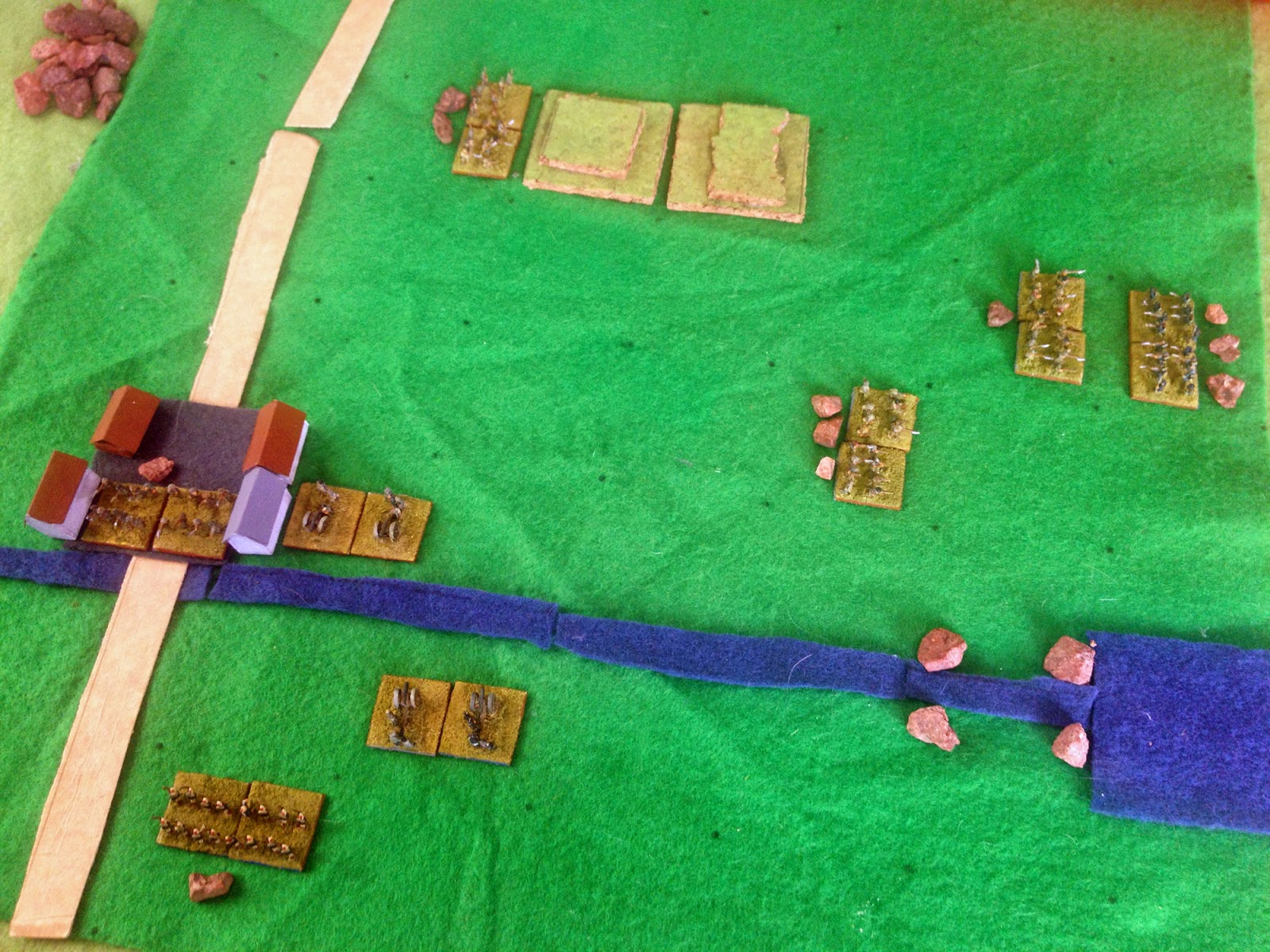 With time slipping away, and the attack over the ford stymied, the Union make a thrust at the town and take it. 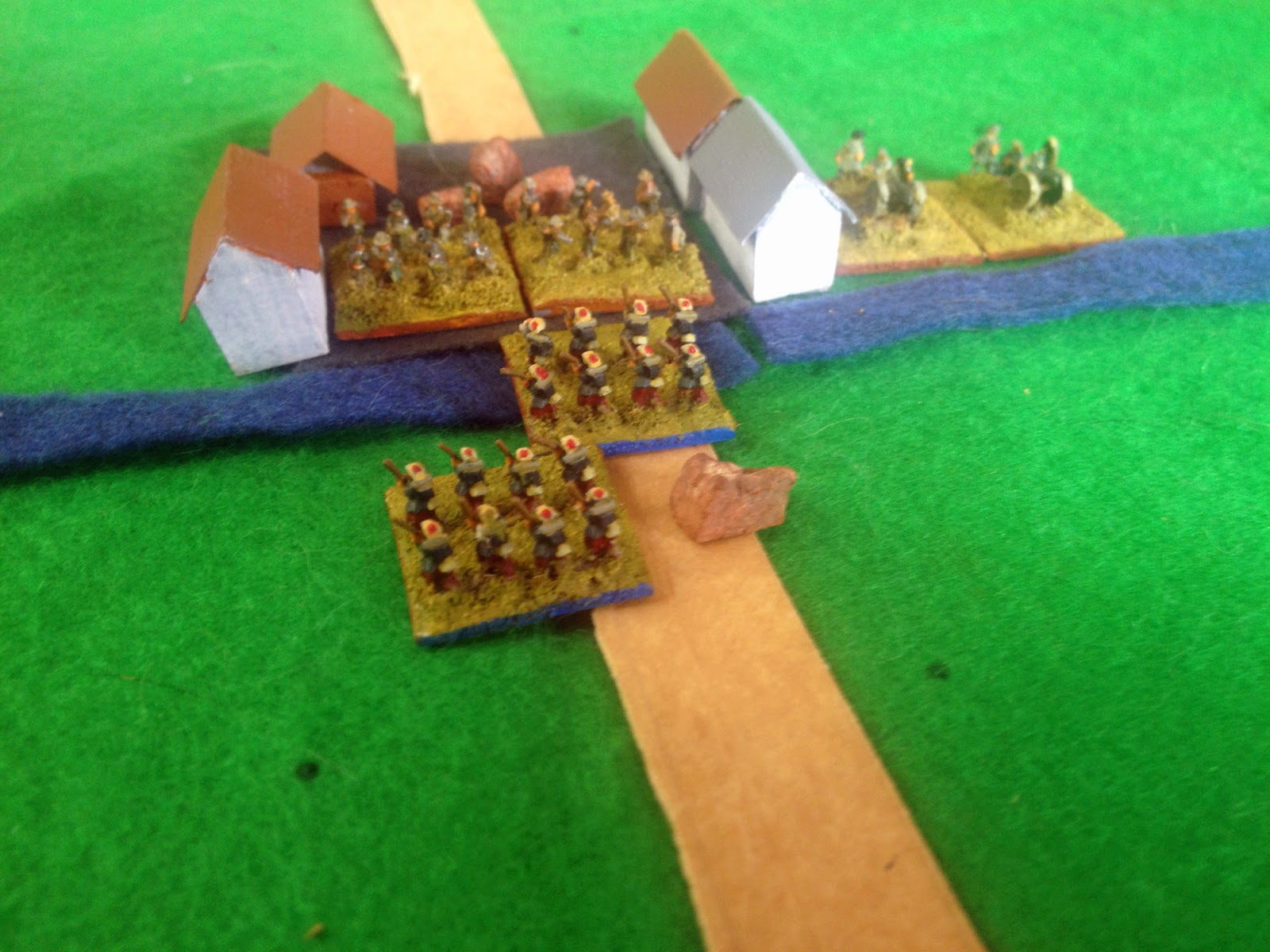 However time was running out, and a rush at the hill to at least force a draw wasn't enough. As night fell the Confederates still held the high ground. 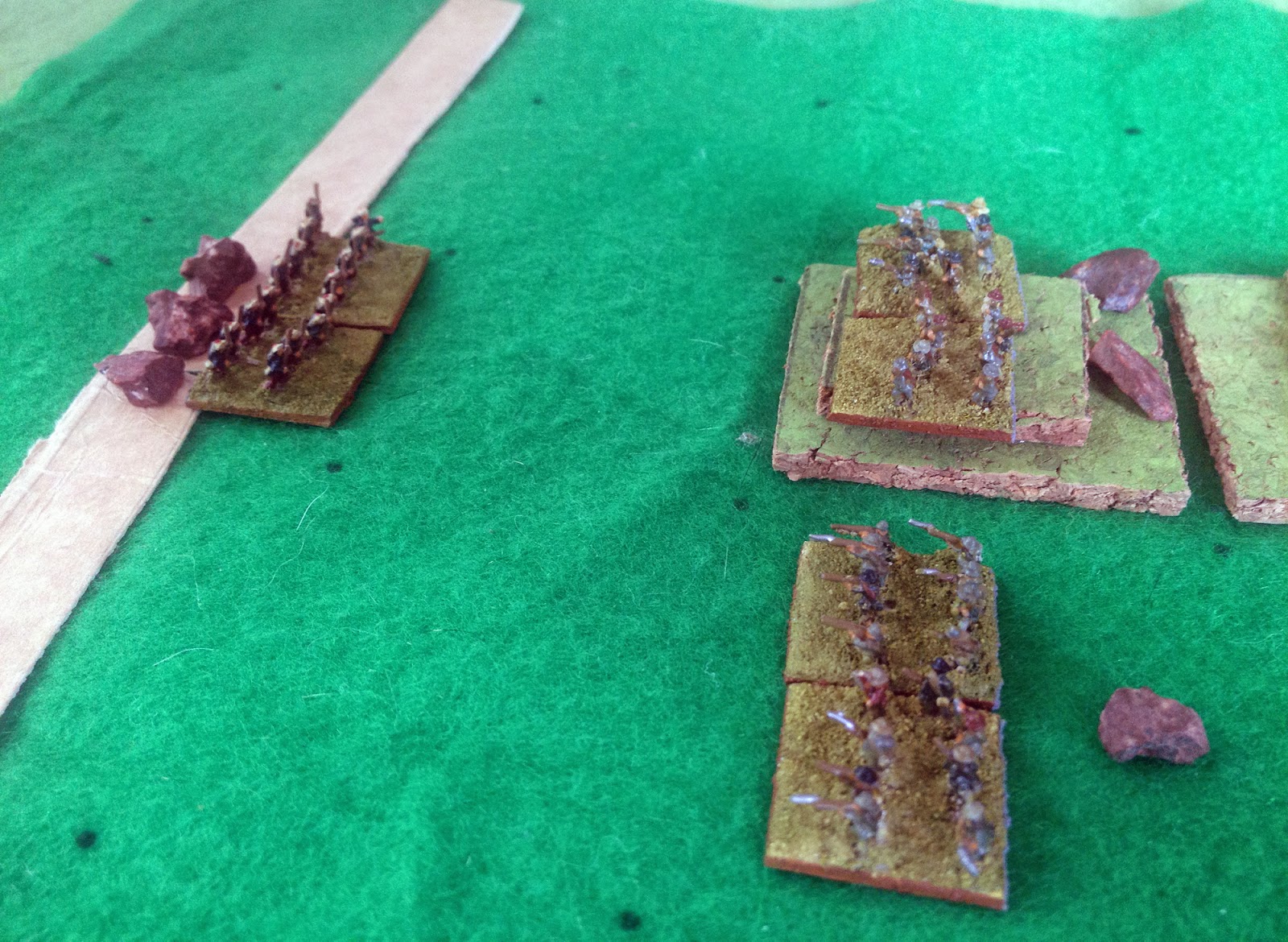 The rules I used were probably not much more complicated than those in 'One Hour Wargames', and at some stage I guess that I should write them out in full, instead of having them scattered across various blog posts and in my head.

Both games played out in an hour, although I set up the first game before I went to bed yesterday, and played through the opening moved whilst simultaneously cooking a full-English breakfast. I finished it after I ate. So in that respect they live up to their concept - 'One Hour Wargames'.
Posted by Kaptain Kobold at 14:11