Some friends of ours apparently have a family games afternoon every Sunday, and this week we got invited. This was because, unlike them, we own a Risk set. And Marco - you remember Marco? - really, really wanted to play Risk.

I don't know why we have a Risk set. It's years since we played it because, frankly, it's pretty tedious, but I think it's one of those essential that you have to have in your cupboard, like Monopoly and Cluedo. People kind of expect it.

Anyway, we hit a basic problem from the start in that Risk is designed for up to six players, and there were eight of us. So the older generation played as husband and wife teams, whilst the four offspring (all over eighteen, so no longer children) played individually.

I actually enjoyed the game more than I thought I would. Catherine and I were the first to be knocked out, though, as we gut stuck in Europe and just couldn't expand properly in any direction without getting picked off from another. Claudia and John suffered the same problem, lasting one turn longer than us by virtue of the fact that they picked us off to get our cards and give themselves some reinforcements. Marco went for the famous Dig Into Australia strategy, Maya took over North America and Eric went for Africa. South America switched between Eric and Maya for a while. Cei ended up in the China/Siberia bits of Asia, neither expanding nor contracting.

Marco likes to win, so the main game plan was to stop Marco winning. This worked. Eric shoved Maya out of the Americas and, after a epic series of reinforcement cards wiped out first Marco, then Maya, before running out of steam with Cei. Cei rallied and regained a lot of lost ground, but Eric came back to clinch the game. Pretty much how every Risk game goes really; one player spends an hour steamrollering a couple of others whilst the three players who have been knocked out watch. 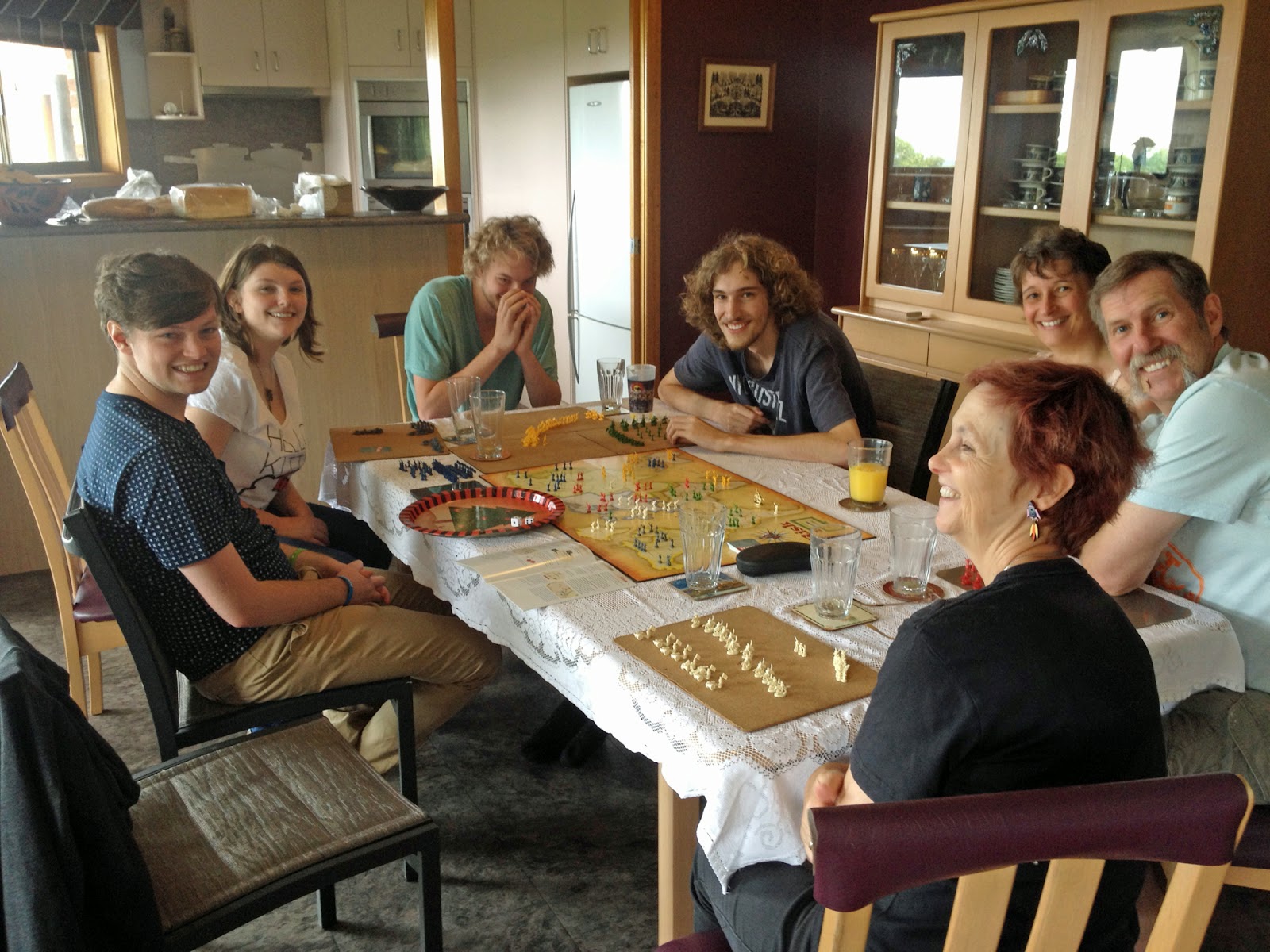 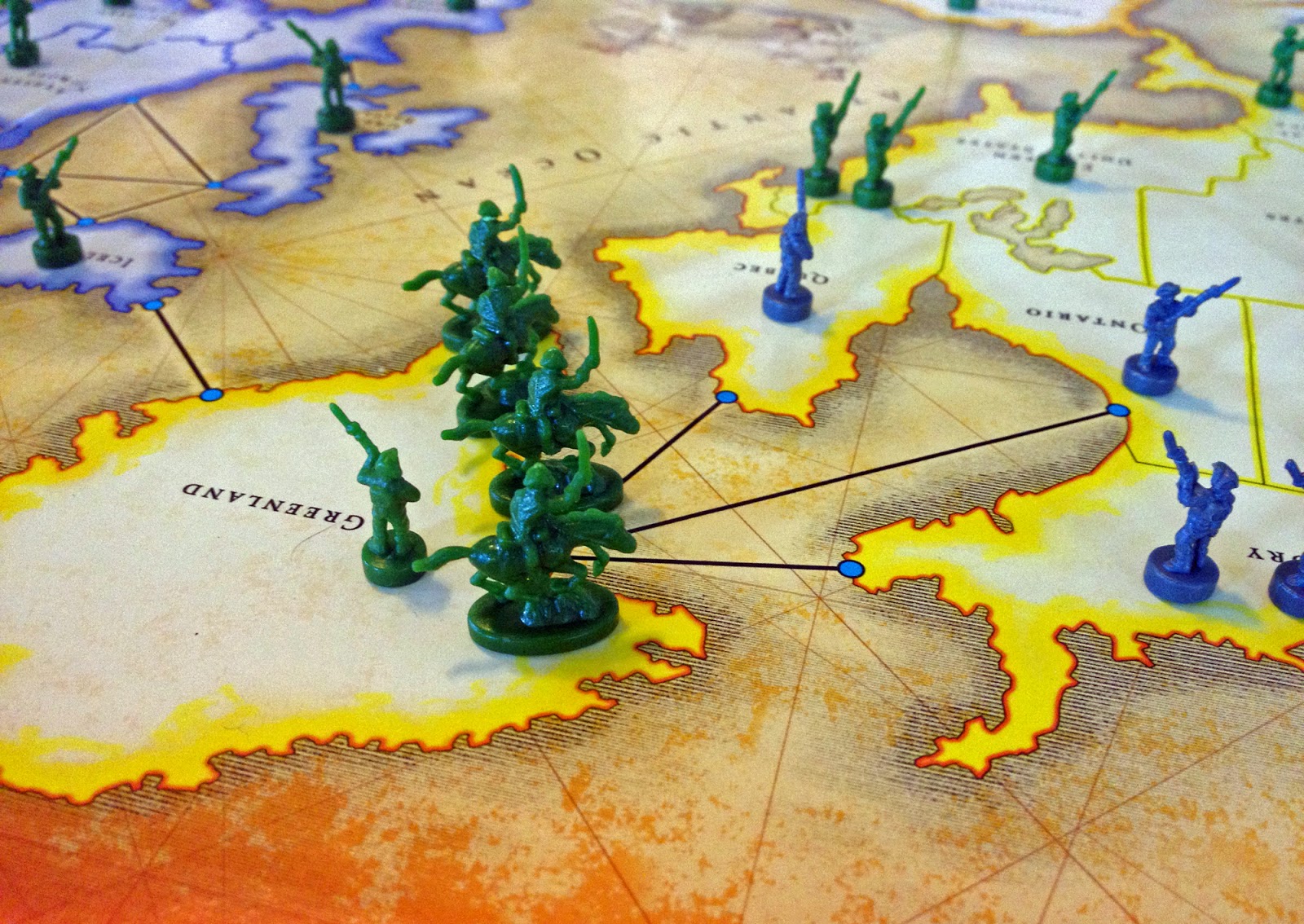 After an aborted game of Newmarket, abandoned mainly because no-one but John seemed to like it, we played a few rounds of Tsuro, which is actually designed for up to eight players. Everyone seemed to enjoy this and, given that it's mostly luck, most people got a chance to win or, at least, survive until near the end. Tsuro is becoming a bit of a favourite for the quick and easy game option. 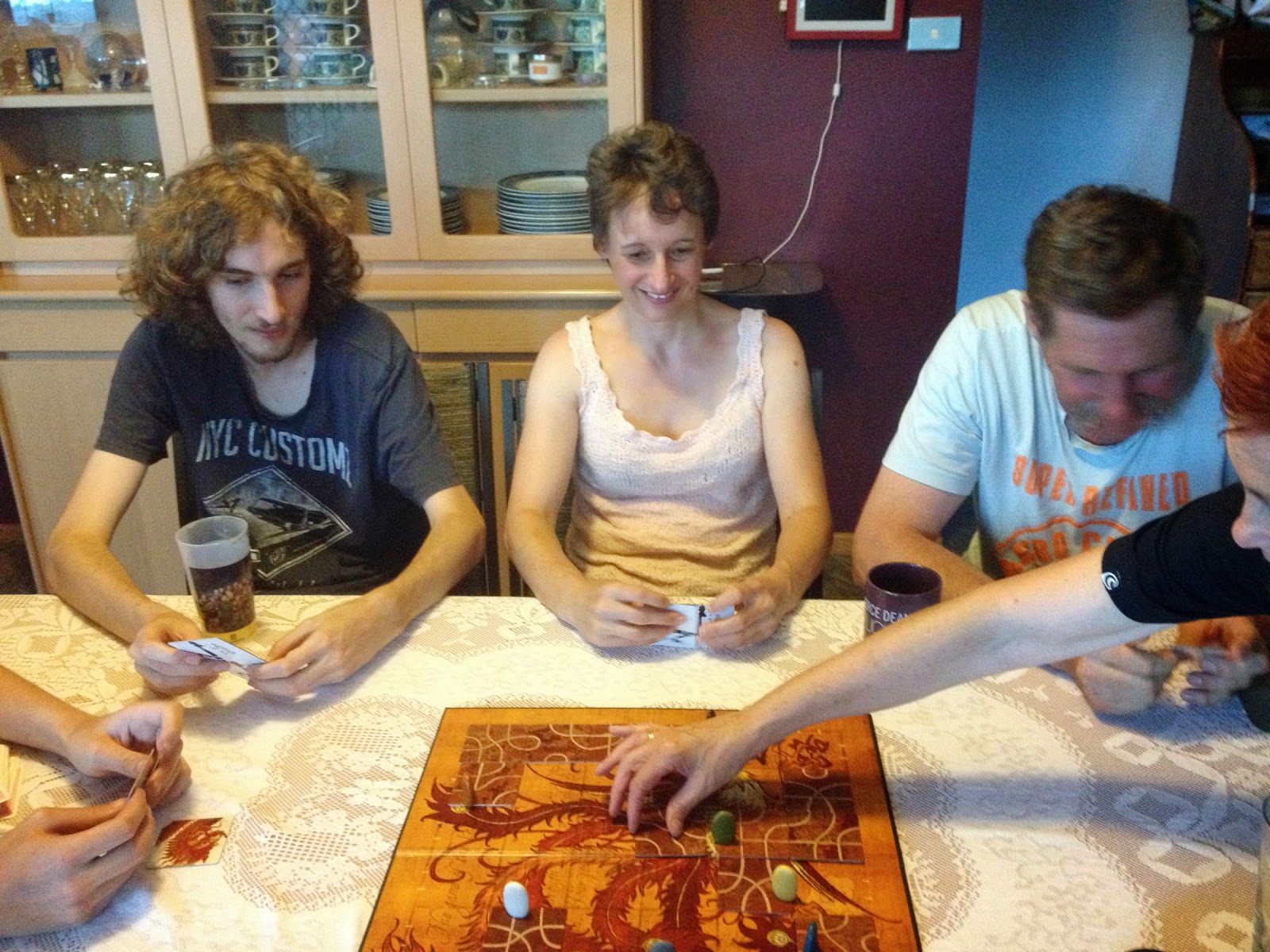 One thing that did come out of the afternoon was the proposal that we have a games evening on New Year's Eve instead of hauling off to sit on the harbour-side for three to four hours watching fireworks and then spend an hour getting out of the car-park afterwards.Catherine and I had a long tradition of playing games on New Years Eve, mostly due to the fact that having small children we didn't get to go to parties, so this will be a bit nostalgic. I'm not sure what we'll be playing though. Not Risk.