Battle of the Dunes

In the Twilight of the Sun-King Yahoo Group's files section are some scenarios. One which caught my eye (because it is small) is for the Battle of the Dunes in 1658. Whilst nominally fought between a French and Spanish army, the French had allies from the Commonwealth whilst the Spanish were a mixed bag and included Germans, Walloons, some English and Irish Royalists and a whole flank of French rebels..

I set up the game using my paper ECW armies, with a base-width being equal to 3cm. Because of my limited troop collection I scaled down both armies by about a third. I should have really scaled the battlefield accordingly; paintings and prints of the battle show it extending into the fields adjoining the beach, whereas my meagre armies fitted onto just the sand.

The scenario defines the whole area the Spanish army is deployed on as dunes, counting as defensible for infantry and bad going for cavalry. I couldn't reconcile this with the rules, in which cavalry must move in column in bad going, thus completely nullifying them on that half of the board. However the few accounts I skimmed suggested that the Spanish army deployed its infantry on a particularly big dune, and that those was the significant terrain feature. I opted to depict the dune only, making it big enough to hold two infantry. This was classified as bad going and defensible. The rest of the Spanish half of the beach required all cavalry to pass an action test in order to do anything.

Here's the deployment, from behind the French lines. Out to sea are ships, providing artillery support for the French army. Historically these forced the Spanish cavalry on that flank to deploy behind their own lines (I think), but I decided they would tough it out in this game. The coloured counters represented the positions of the wing commanders, since I didn't have enough leader figures printed off and based.

And another view. Before I started the game, however, I redeployed the cavalry on the French right such that the two units were one behind the other. 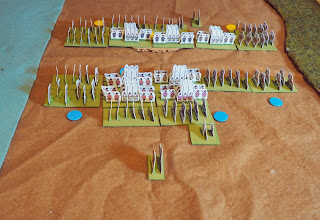 With the armies being smaller than the published scenario, I changed the victory conditions slightly. The French had to force the Spanish to take an army morale test within six turns, or the Spanish would win a morale victory. If either army failed an army morale test, then it would lose, but the French had to do this quickly in order to avoid the head-shaking of history.

The French opened the battle in conventional style, advancing their whole army, with the cavalry charging straight into action. 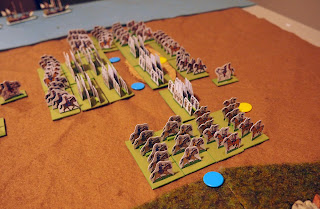 The infantry marched forward, and musketry was exchanged. But the French weren't looking for a firefight; they levelled their pikes and pushed up the dune, even if it took some exhorting from their commanders to achieve this. 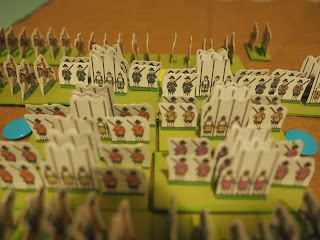 The Spanish cavalry on their right fell back from the initial attack. The French held off following up, and let the Navy soften them up a little first. 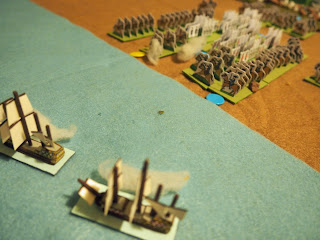 Things went badly for the Spanish in the centre. Cromwell's veterans pushed straight up the dune and routed the infantry facing them after a brisk fight. 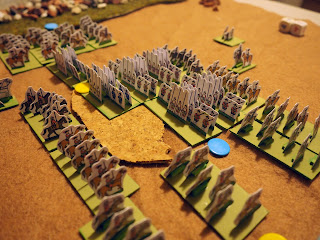 The French left flank cavalry charged again, whilst the Navy engaged their supports, routing them. Against the odds, though, the Spanish front line held firm.

The French and British infantry now advanced onto the dune in force, as another Spanish infantry unit was routed. Only the French rebels on their left were now holding their ground. 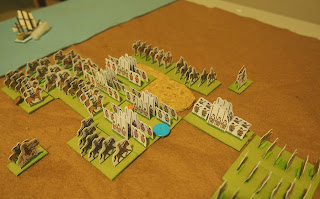 However the gaps in the Spanish line were becoming critical, as the French turned on the flanks of the Spanish. The Spanish cavalry beyond the dunes came under fire from the summit, but failed to retire, and were shot down. 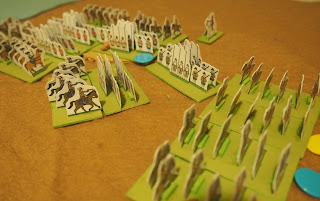 The last remaining infantry unit in the Spanish army broke, and a cascade of morale tests broke the whole army. 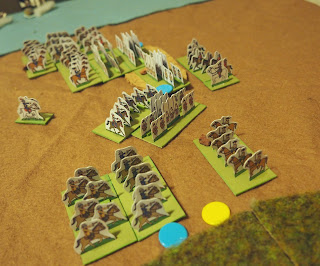 The cavalry on the Spanish right held out to the end. 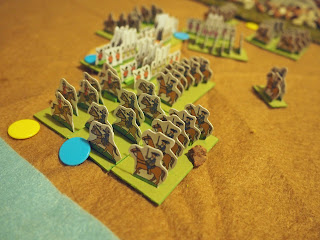 This is probably not a very balanced scenario, unless things go very badly during the initial French attack. The French had the edge in numbers, quality and leaders, which is not offset by the one terrain advantage the Spanish have. Having artillery, both on the field, and offshore, also gives the French an edge. The scenario does demonstrate how an army rapidly disintegrates once the flanks of its units become insecure, however; as the French and British infantry pushed forward onto the dune, they compromised the flanks of the Spanish cavalry on the strand and the French rebels on the left, and hastened their demise.

The paper armies looked nice under these rules, and I'm inspired to print some more to expand my forces. They may not be entirely historical (or even remotely historical) but they did the job.