It's Week 26 of my HOTT 52 project, and I'm now halfway through it. I'm as amazed as anyone that I've actually stuck it out this far. But there you go. I have.
Anyway, this week's game sees Comrade Stalin leading an expedition to colonise Skull Island, and turn it into a Comunist tropical paradise. His forces have already established a beachhead. 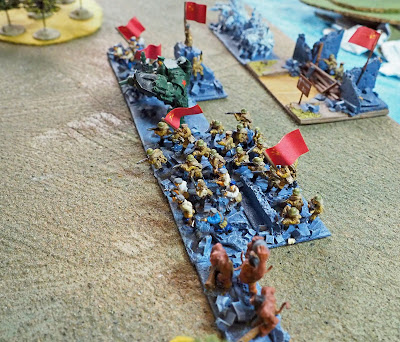 The proletariat hordes are ecstatic. 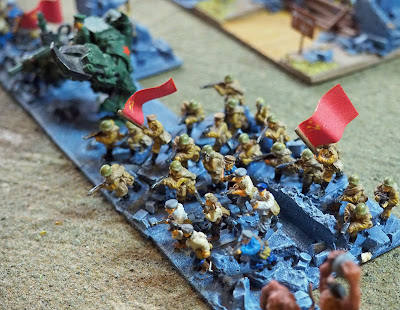 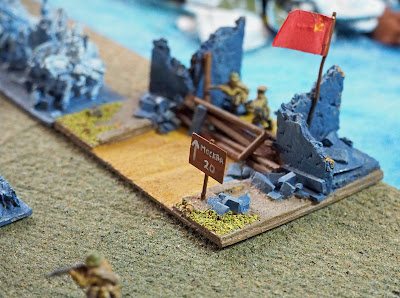 But the inhabitants of Skull Island aren't going to stand for this act of aggression. Led by their king, Kong, they assemble and launch an attack. 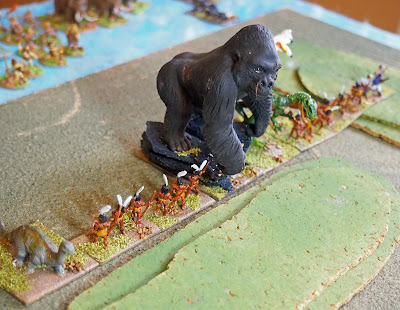 Kong was accompanied by his best friend. Obviously a capitalist American agitator, who has convinced the inhabitants to fight their own liberation 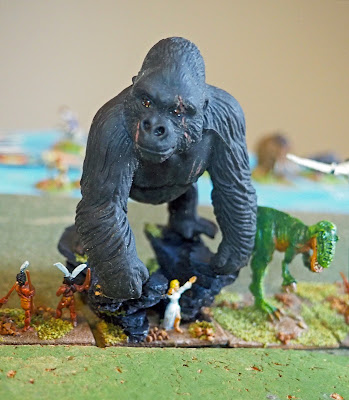 Anyway, here are the two armies lined up and ready to fight. Do you want lists? You do? Well, I'll put them at the end. 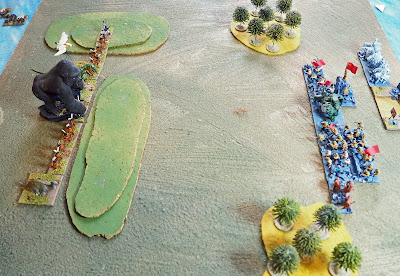 Skull Island made the first serious move. As the apemen moved into the edge of a patch of jungle, horses of beasties swarmed out and overwhelmed them. 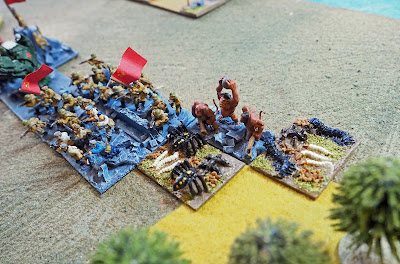 As the Soviets moved forward in order to gain more fighting room, some heroic workers destroyed one group of creepy-crawlies. 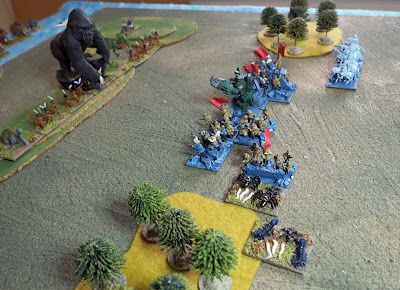 As the armies approached, the air chilled as General Winter arrived to support the Soviets. 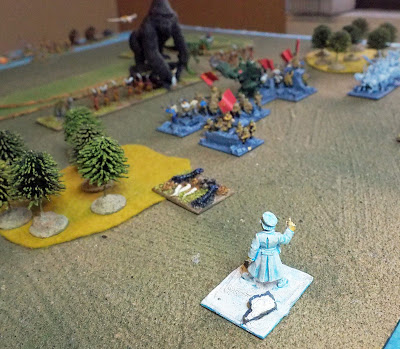 The denizens of Skull Island charged. 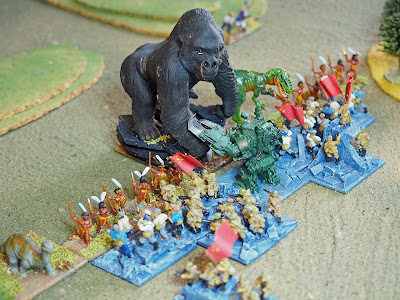 The Soviet line collapsed as screaming natives sliced their way through the hordes of soldiers that made up the main part of it. A Hero of the Soviet Union moved to halt the enemy advance, as did the spirits of earlier Russian heroes. And Stalin faced kong in an epic duel, driving him back in the Soviets' only success. 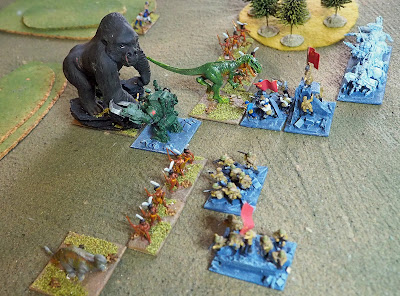 General Winter chilled a pterosaur, driving it back. 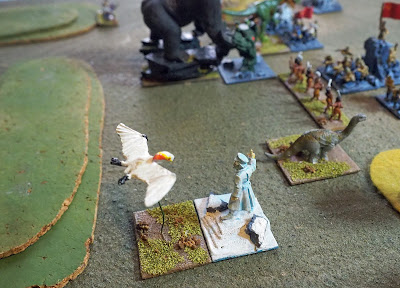 The heroes charged some natives as a brave workers held of a ferocious dinosaur attack. 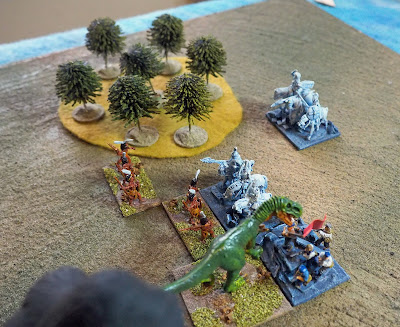 See the proletariat hold off an attack by the dinosaur lackey of a giant feudal gorilla.

(I mean, come on, if your HOTT games don't look like this, what are you really doing?) 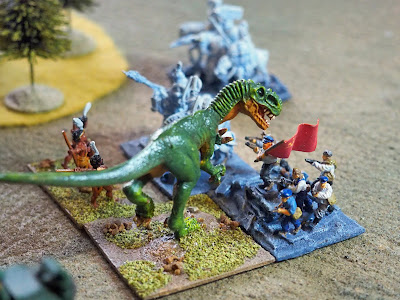 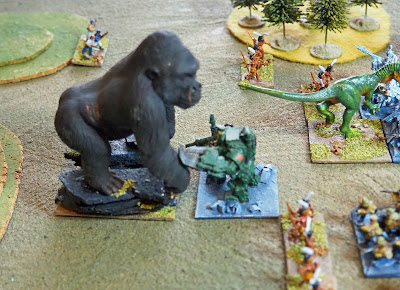 The crisis point of the battle. Things were actually looking pretty desperate for the Soviets. 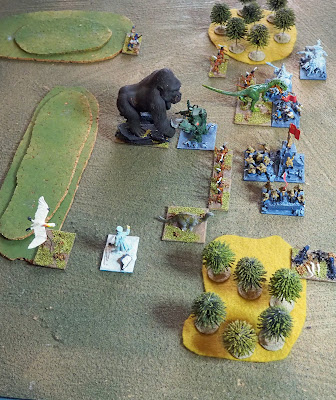 General Winter moved to aid Stalin. He took a moment to point out that even the worship of a god that obviously exists, in the form of a giant gorilla, was still simply the opium of the people. 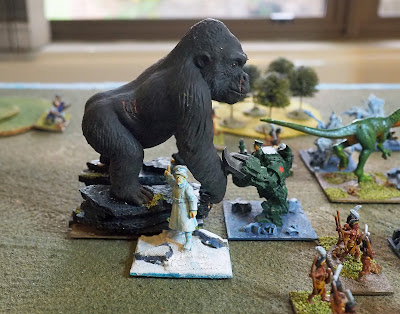 Then he joined Comrade Stalin in freeing the natives from the shackles of their religious belief, by killing Kong. 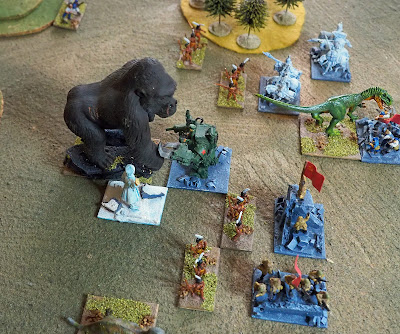 But the Soviets had taken so many casualties that even the loss of their king and general wasn't enough to break Skull Island's forces, who regrouped for another attack and killed more heroic workers. 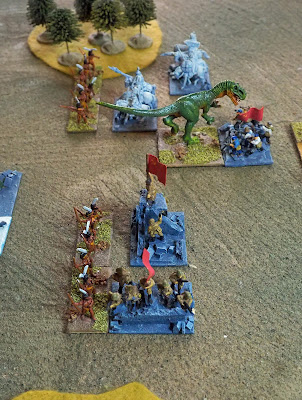 Unfortunately the thing with the proletariat is that there's an awful lot of them. Stalin ordered up reserves, and this brought the Soviet army to a point where Skull Island's losses were now greater than those of what were now their liberators from kaiju oppression. 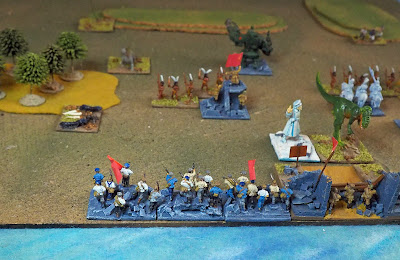 From a game point of view, the Soviets brought back some lost hordes which meant that Skull Island ended a bound having lost their general and more points than their opponent. It's a passive way to win a battle, but totally legitimate. 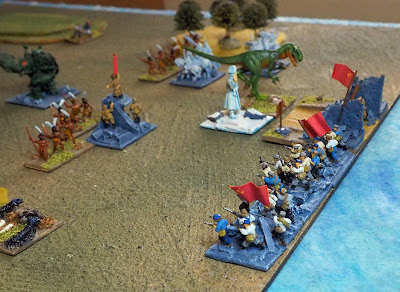 As the fighting petered out, General Winter began to educate a dinosaur. 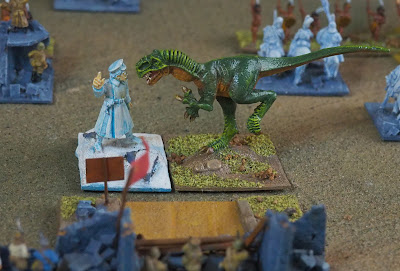