I've stated here before that 'An Unfortunate Oversight' is one of my favourite scenarios in 'One Hour Wargames', and you'll find a couple of write-ups of it here. I was quite pleased, therefore, when it came up as the random scenario for trying out the few tweaks I needed to make to my OHW ECW adaptation.

So what do we have in this scenario? Well, we have a village by a river, defended by some supported Royalist foot. The Parliamentarians  are lined up ready to attack. 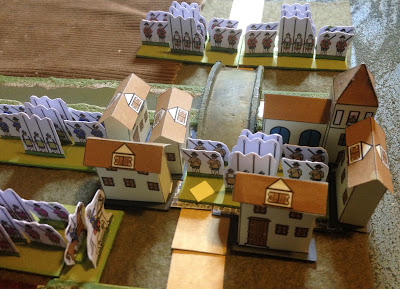 But wait! The bulk of the Parliamentarian force is actually further upriver, ready to cross by a ford which the Royalists didn't know about. 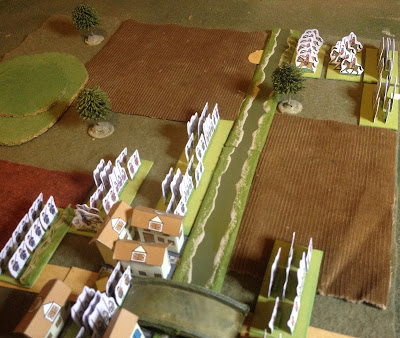 Both sides rolled four units of foot. I made one elite and one raw. All of the Parliamentarian foot was shot-heavy, whereas their Royalist opponents were pike-heavy. The Royalists rolled one unit of horse (Automatically dashing) and one of dragoons, whilst the Parliamentarians has two units of horse (both disciplined).

The Parliamentarian horse led the way, crossing the stream and heading for the hill, which is the actual objective in this scenario. 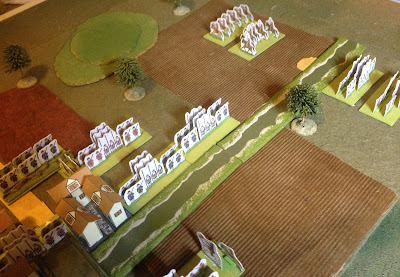 The Royalists turned the bulk of their force to meet them. The dragoons were left in reserve, whilst a couple of units of foot stayed to defend the village. Whilst not an objective, loss of the village would allow the Parliamentarians to launch a two-pronged attack. 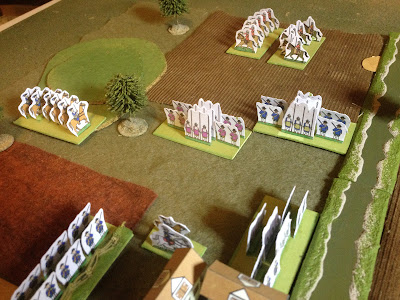 The Parliamentarian leader began attached to one of the foot attacking the village. I kept a leader's ability to add or remove out of ammunition and impetus markers, but removed their ability to rally off hits. Instead I allowed a leader to attach to a unit which had taken hits and give that unit a cover save. This fits the Neil Thomas OHW ethos better, by maintaining attrition and not having hits tracked in both directions. If any of the save rolls were a '1', then the leader would be killed or wounded; lost to the controlling side for a turn whilst someone else took over. 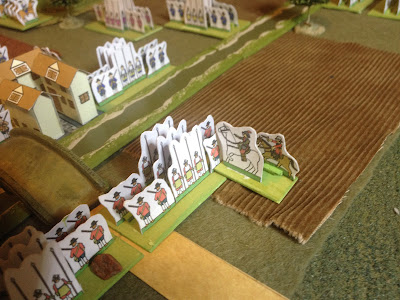 Meanwhile the Parliamentarian horse took the hill. The outnumbered Royalist horse moved to oppose them. 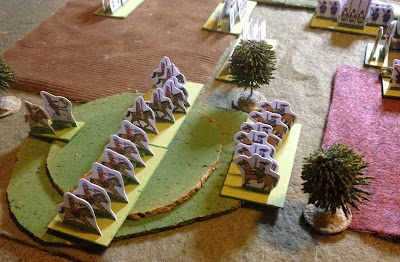 Their uphill cavalry charge was about as effective as you'd expect it to be. But the supporting foot below the hill started inflicting hits on the horse. 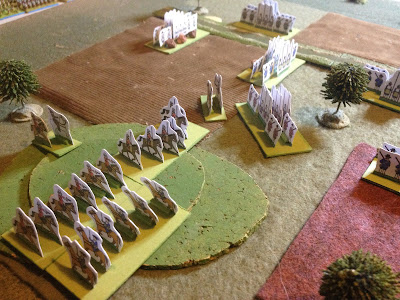 The Royalists were taken in the flank. 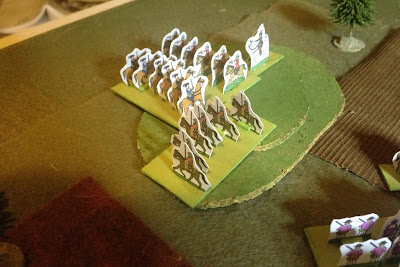 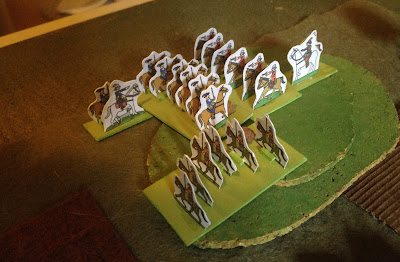 At the ford, the foot of both sides were exchanging volleys. Or salvos. Or whatever they exchanged in those days. 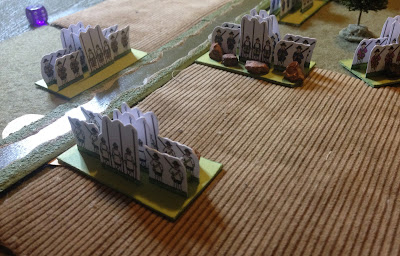 The Royalists now had a handy little firing line set up from the ford to the hill. Its only downside was that it wasn't really inflicting much in the way of casualties. 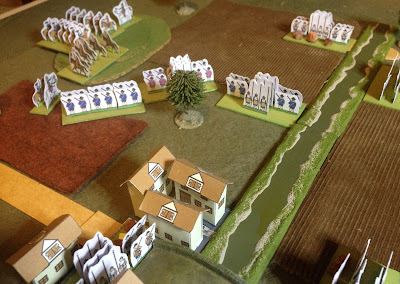 Out of ammunition, and with their leader busy elsewhere, Parliamentarian foot surged across the bridge to assault the village. It was only defended by militia; how long could they hold out? On the hill the Royalist commander fell, and the horse routed not long after. 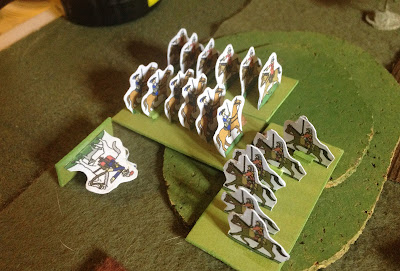 An overview. Parliament still held the hill. A push of pike was happening at the ford, and another in the village as Parliament tried to cross the bridge. 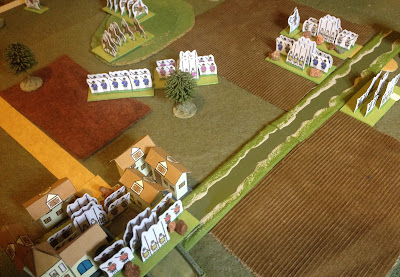 The horse on the hill redeployed, ready to charge. Against pike, and dragoons behind a wall, this wasn't the best move, but it would buy time for some Parliamentarian foot to get onto the hill. 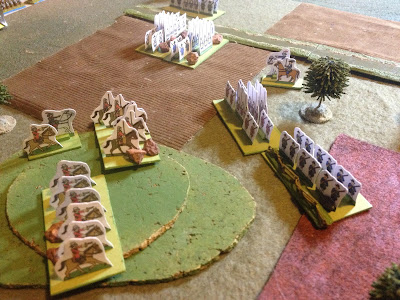 But the reinforcements weren't going to come from the village any time soon; the raw Royalist infantry held firm. 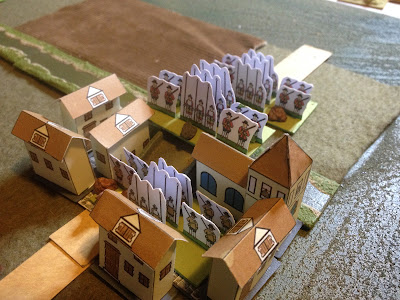 The Parliamentarian commander prepared to lead his horse into the attack. 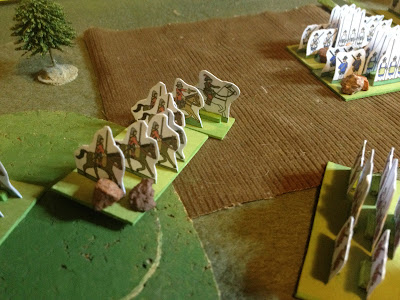 But at the same moment the lead unit attacking the village melted away in defeat. 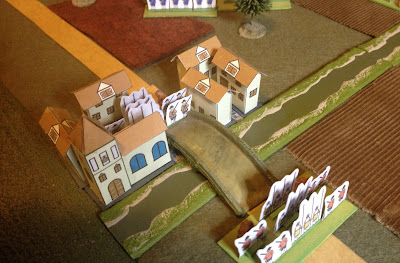 The horse attacked! Amazingly they began to inflict a steady stream of casualties on the Royalist elite foot. 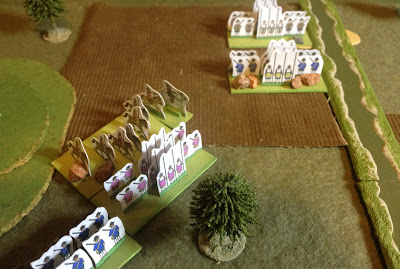 The other unit of horse attacked the dragoons. 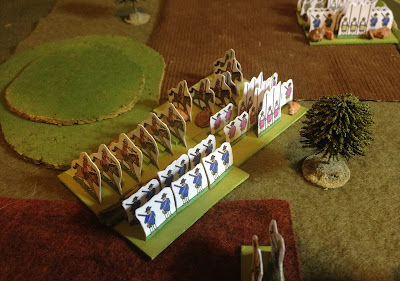 The Royalist commander moved to the village to inspire the defenders. 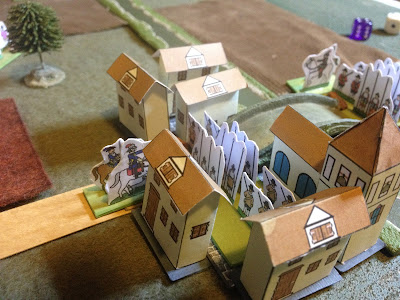 They were inspired enough to drive off the second attacking unit, and were able to leave the village in order to move on the hill. But Parliament had won at the ford and a unit of their foot was moving to the hill as well. 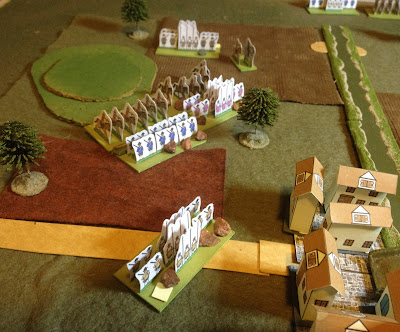 Parliament got there first. 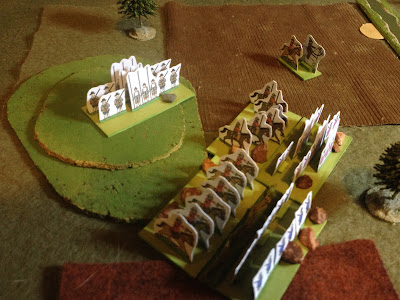 The fired at the Royalist foot, and even the leader's exhortations were insufficient to keep them on the field. The Royalists fled. 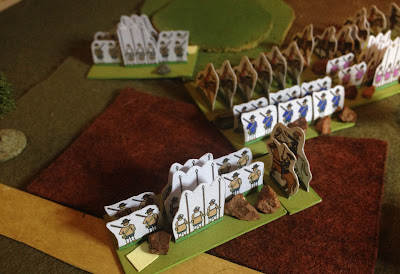 They were closely followed by the dragoons ... 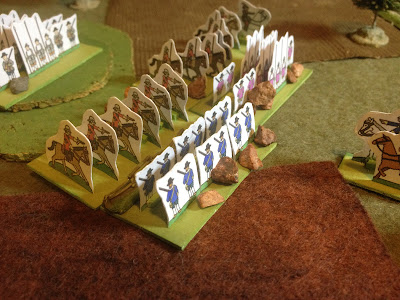 ... and finally the elite Royalist pike and shot. 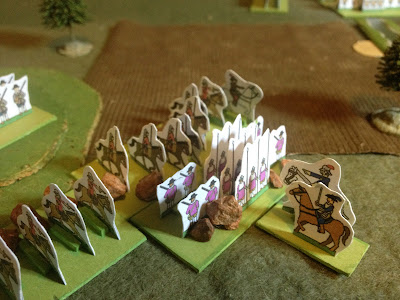 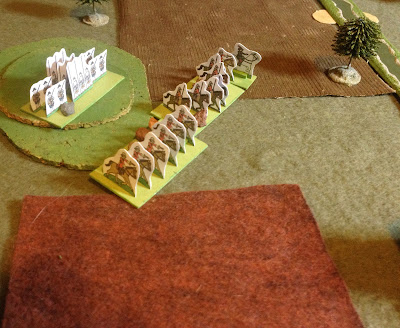 The battle was decided on some terrible saving rolls by the Royalist foot, and some lucky rolls by the Parliamentarians.

The changes to the leader rules were mostly OK, and any adjustments I make will just be down to the timing of when things happen. Having them give a save roll felt more in keeping with the original rules, and added in a suitable level of risk. I'll try and write things up properly at the weekend, if not before.

What I thought I might try, now that I have a set of rules I'm fairly happy with is maybe a mini-campaign. Some of my earlier game reports have featured a campaign set in the fictional country of Midsomer; maybe it's time to do that properly. But whilst I have a couple of possible campaign structures for such a campaign, I need to work out the chrome.