Regular readers of this blog will remember that last month I did some playtesting for a new game by Nordic Weasel called 'Scum Of The Earth'. These rules are designed for small black powder actions using small numbers of figures. The use simple D6 mechanisms and are designed to give a quick and relatively simple game.

Well, the rules were published last week, and I bought and downloaded a copy. As well as the basic rules that I'd help playtest, there were extras for unit experience, period specific amendments and even a set of campaign rules. For the money it's an excellent little package. The rules themselves are pretty clear, with no real issue that I've found so far.

Anyway, I've been really slack at playing games recently, so I thought I'd give them a whirl, if only to show you all I'm still alive and blogging. Whilst they are obviously written with a Napoleonic era style game in mind, the period specific rules cover the English Civil War right through to the opening stages of WW1. The specifics are very basic, but like a lot of Nordic Weasel rules, the section is designed to be organic, with amendments and updates to be expected as players feed their experiences back into the game. The mechanisms are simple enough to stand all kinds of adjustments and tweaking.

Having playtested them in with games set in the South American Wars of Liberation and the US-Mexican War (no, I didn't blog those ones), I decided to go to the very beginning and give them a whirl with the paper ECW armies.

I set up the introductory scenario the rules offer - three infantry and a cavalry unit on each side, with a hill and some rough terrain in the middle of the board. The Parliamentarian troops are on the left and the Royalists on the right. I didn't apply any army specific traits (no reckless Royalist cavalry or better armed Parliamentarians), but I did make two infantry units on each side Amateur to add a little bit of interest. This meant that there was a chance they wouldn't act each turn. 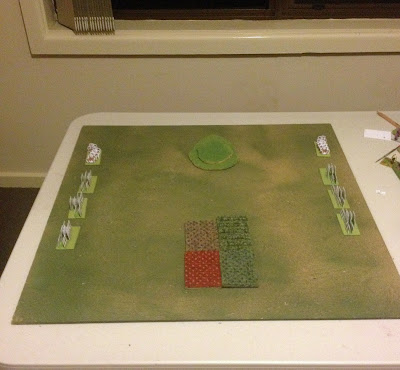 The Parliamentarian moved first and advanced cautiously trying to stay in line. Movement in Scum of the Earth is random, so keeping a group of units under control takes a little bit of finesse. Their cavalry pushed ahead rapidly, getting an extra boost when one of the Royalist units hesitated in its move. 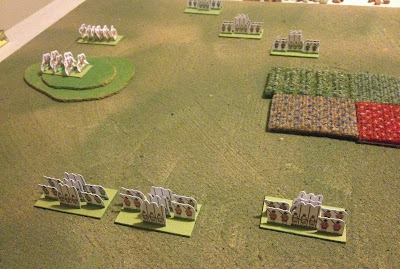 The Parliamentarians got themselves into a useful position, with one unit in the cover of the hedges around the field (I assumed the fields were rough going with a surrounding hedge). 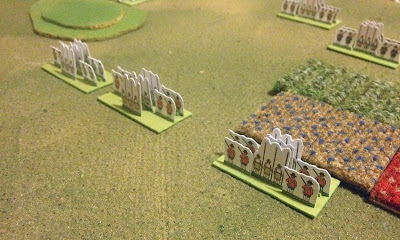 The cavalry engaged, and the Royalists were pushed back. 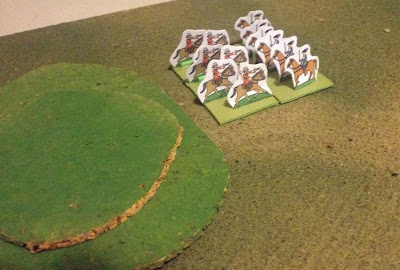 Royalist infantry came up in support of their horse, but their musketry was mostly ineffective. 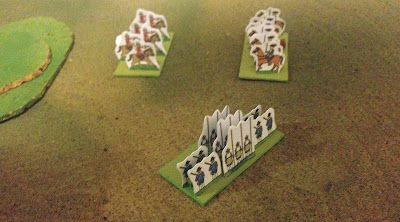 The Royalist cavalry counter-attacked, but were driven off again, and routed. 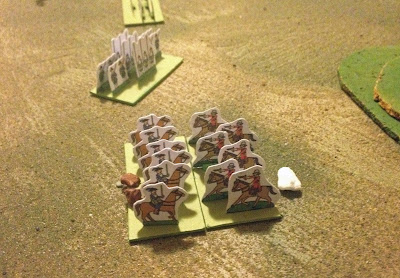 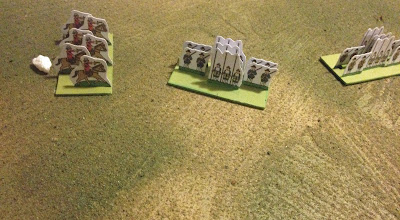 With their cavalry pinning the Royalist right flank in place, their infantry pushed forward. On their left the Royalists had formed one of their units into an attack formation, with pikes to the fore (the counter with an arrow). Their plan was to use the additional movement to push across the fields and attack the Parliamentarians behind the hedge. 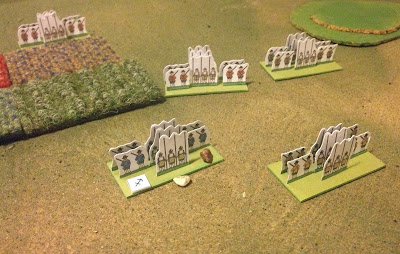 However a close target presented itself and they assaulted the Parliamentarian centre instead. 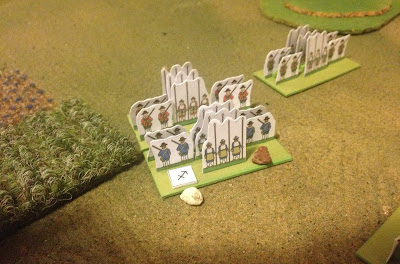 The Royalists were thrown back. 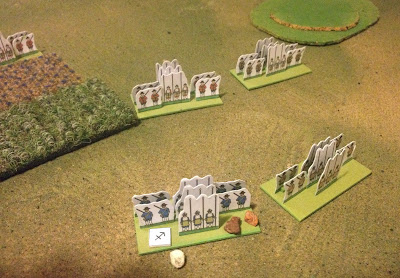 A to-and-fro fight developed in the centre. 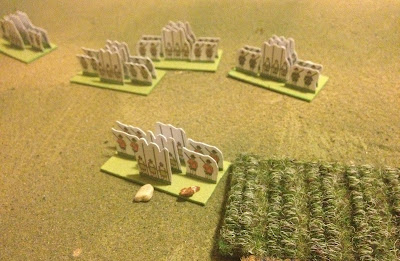 The Parliamentarian cavalry fell back on their left, as the Royalist infantry was able to use reaction moves to turn and face the threat. In this period cavalry are limited as to when they can frontally charge pike-armed infantry. 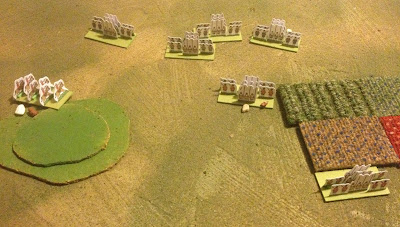 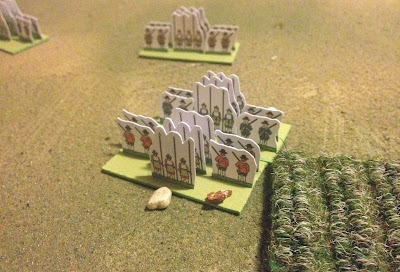 Meanwhile the cavalry routed back under fire. 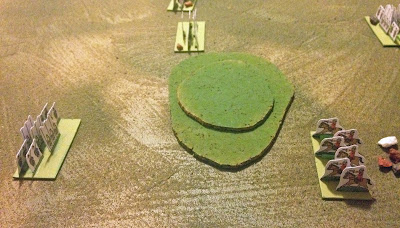 The Parliamentarian infantry pushed across the field and managed to rout one of their Royalist opposite numbers. 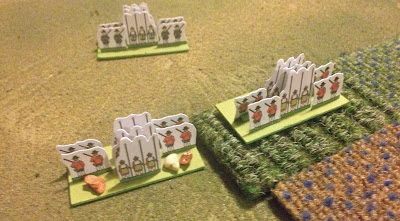 The Parliamentarians kept up the attack, but were suffering heavy casualties. 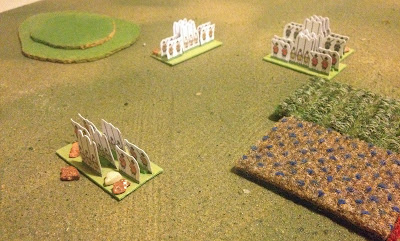 Their cavalry fled the field altogether. 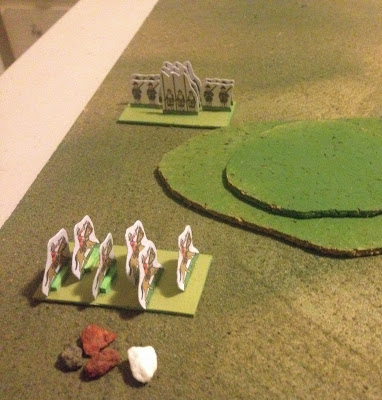 The scenario ran for six turns, and was scored on casualties. It was a draw; although the Royalists had lost two of their four units routed off the field, they two survivors were virtually undamaged whilst although the Parliamentarians had only lost one unit, the others were all seriously battered. 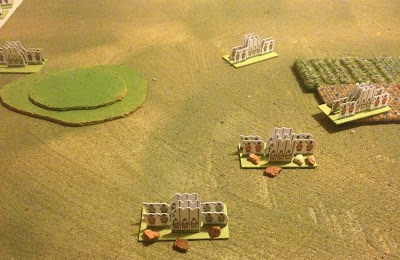 This wasn't too difficult a game to play, although I did forget a few things from time to time, mostly to do with timing of reaction moves and counter-attacks.

I think I could enjoy this game, and have decided to add it to my Six By Six Challenge list. Given its nature I will be dropping Black Powder which, to be honest, was only on the list in order to force me to play it. These rules may turn out to be no better, but I think I will have more fun finding out. However given that I also have a set of pike and shot rules in my list, I will try and steer clear of ECW games with these rules for a while, and try a different era. To be true to the challenge I won't retrospectively include any previous games I've played.

Email ThisBlogThis!Share to TwitterShare to FacebookShare to Pinterest
Labels: 6x6, ecw, report, scum of the earth