Tonight the Wollongong Wargamers had an evening of HOTT and Black Powder, and I had a chance to try out my new 'Game of Thrones' inspired Wildlings army.

In their first game they took on some kind of Arabs under John. Here's my mobile wing: 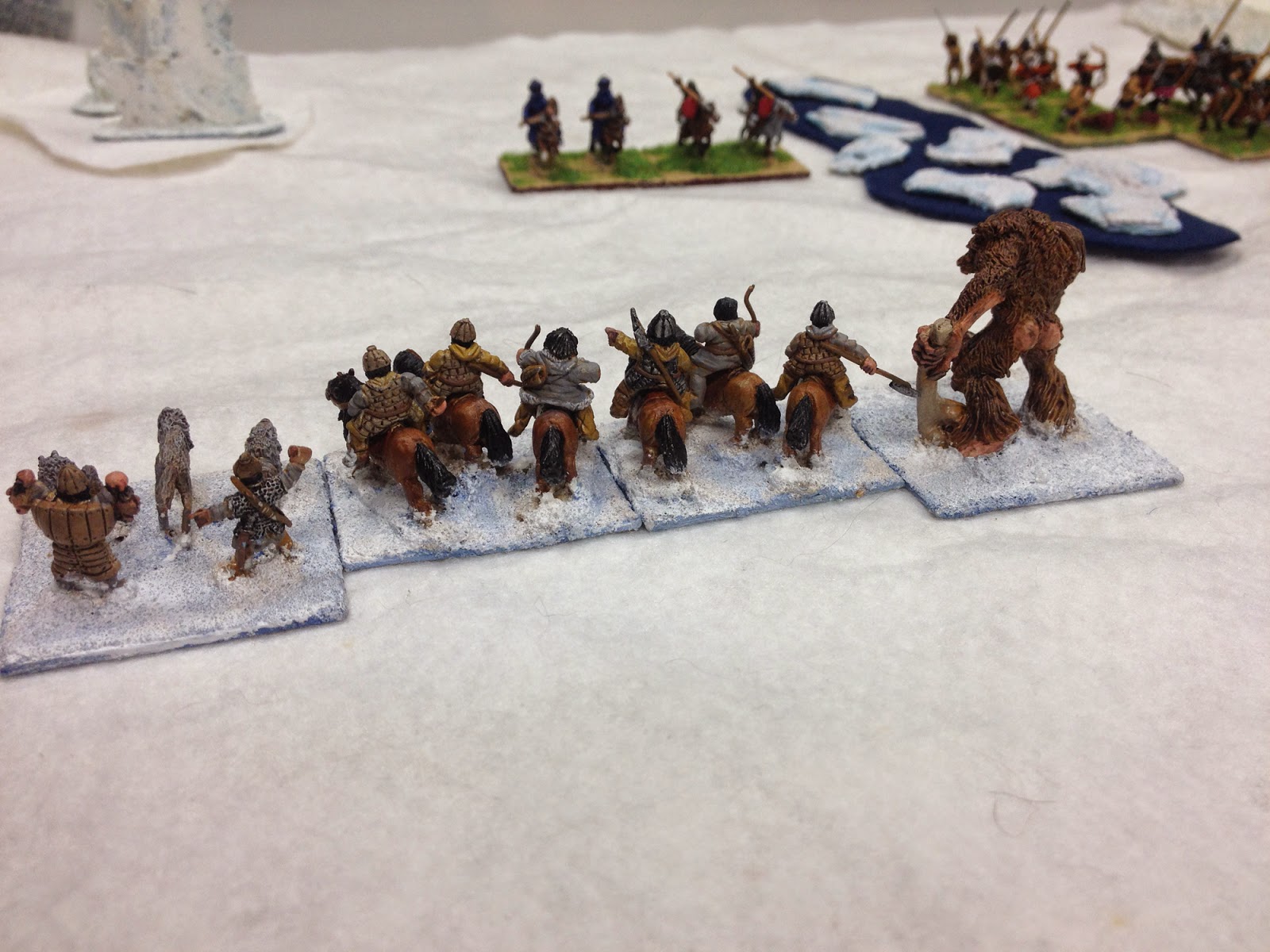 And the infantry line. 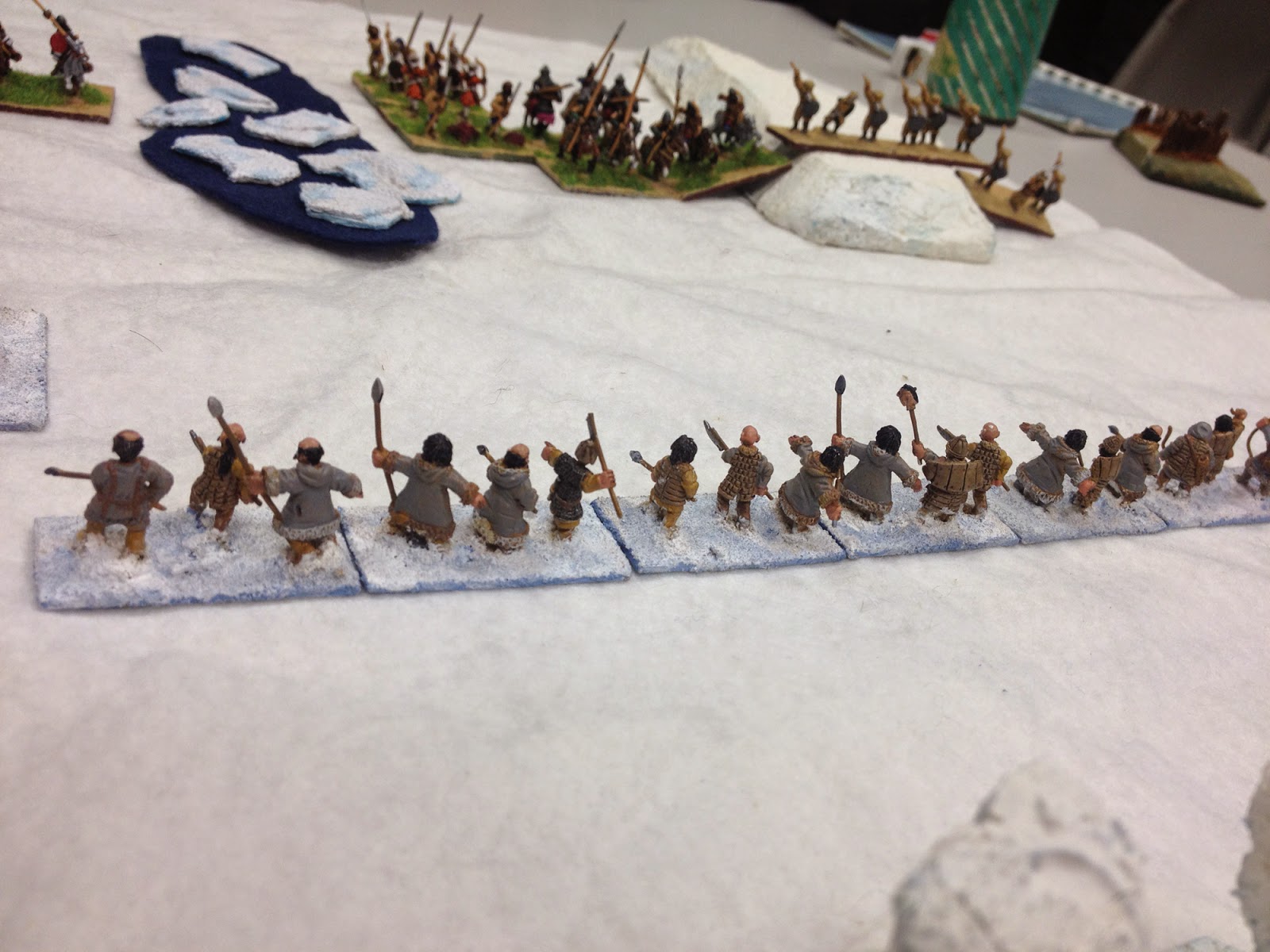 John's Arabs looked very nicce indeed, although the two Knights were going to be a bit dangerous. 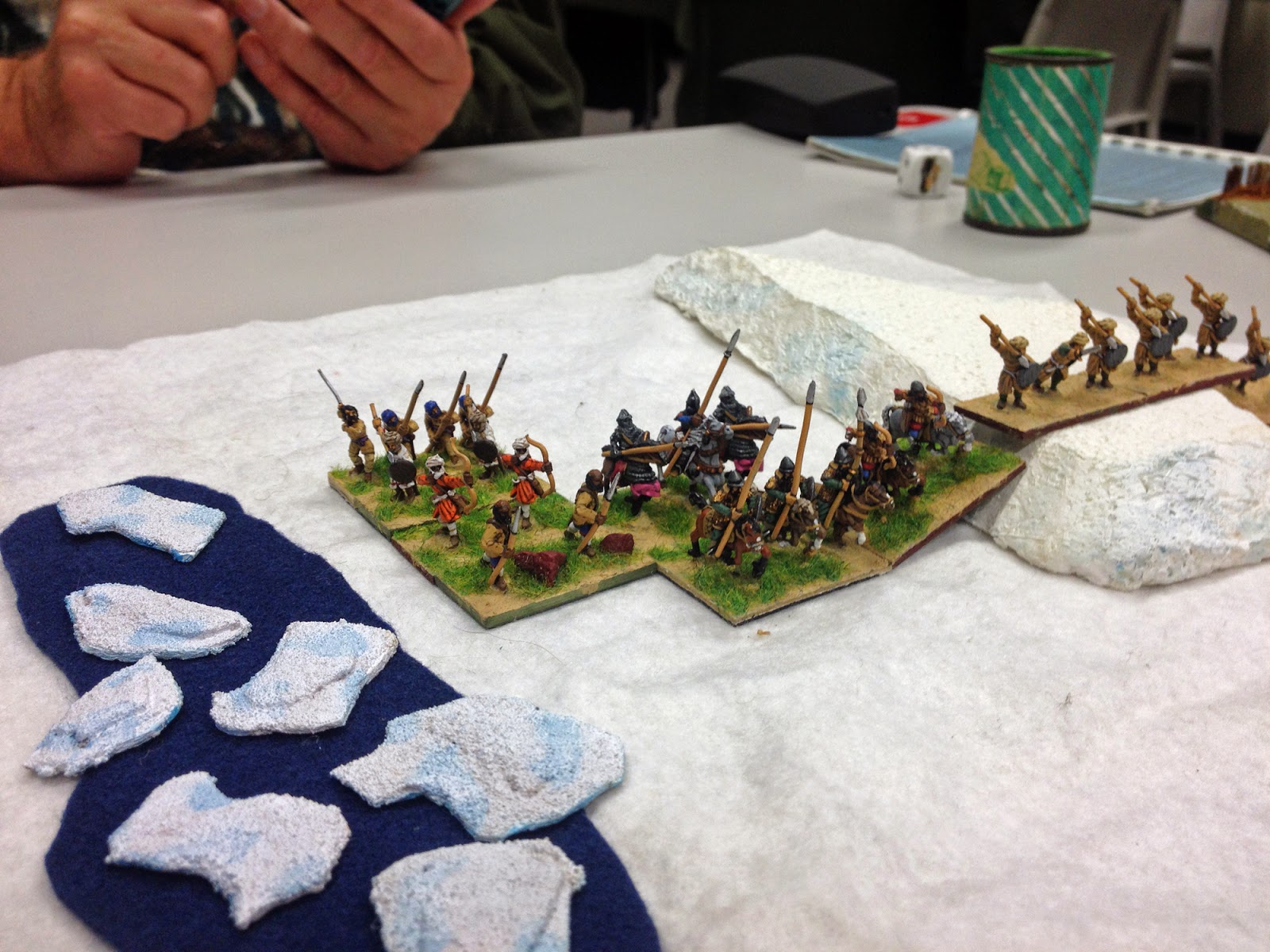 John screened my mobile wing with a couple of Riders. 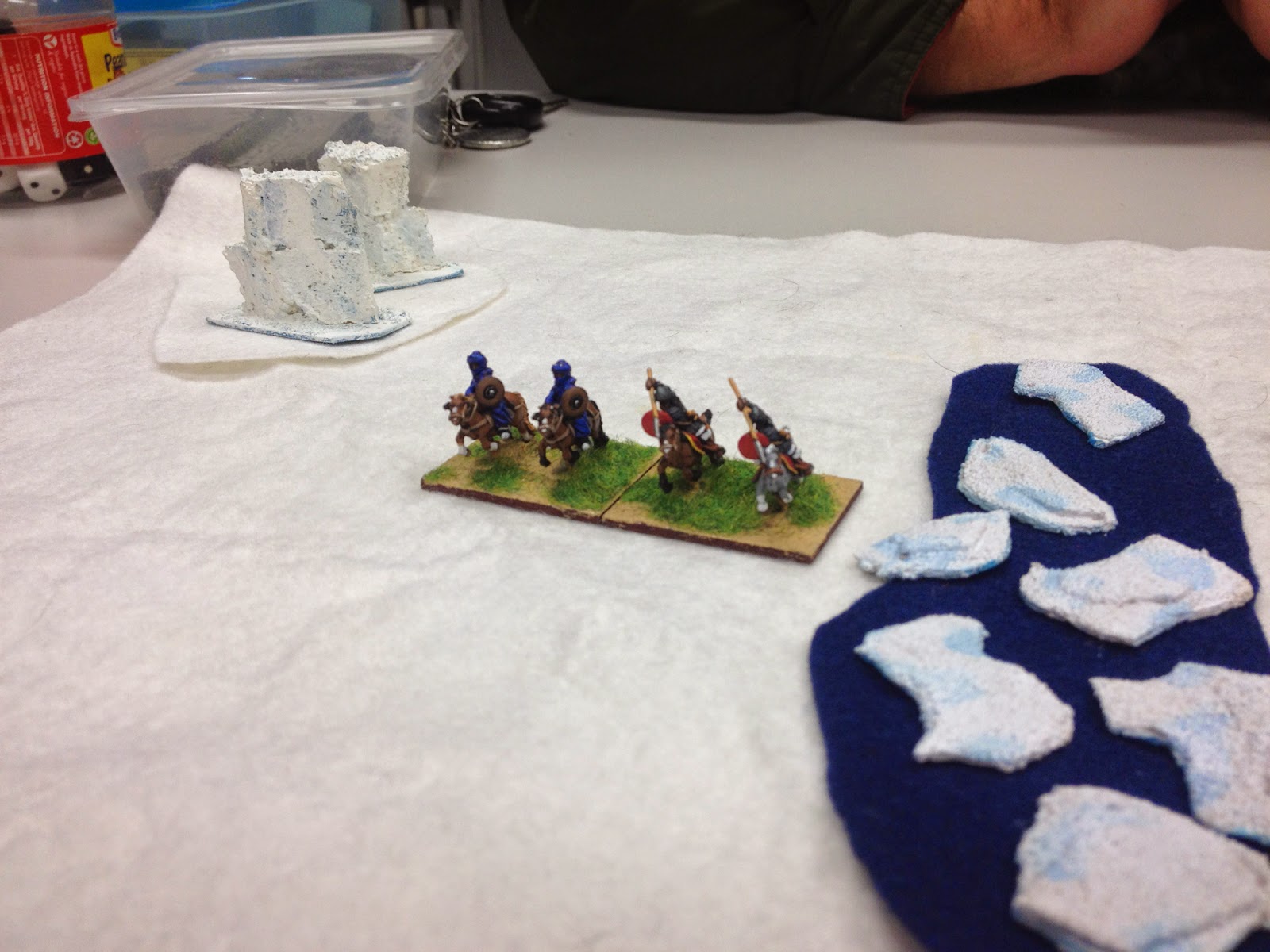 The armies get stuck in. I got lucky; the Shooters took out a couple of elements with stunningly accurate archery, whilst a Warband destroyed the Knight opposing it. 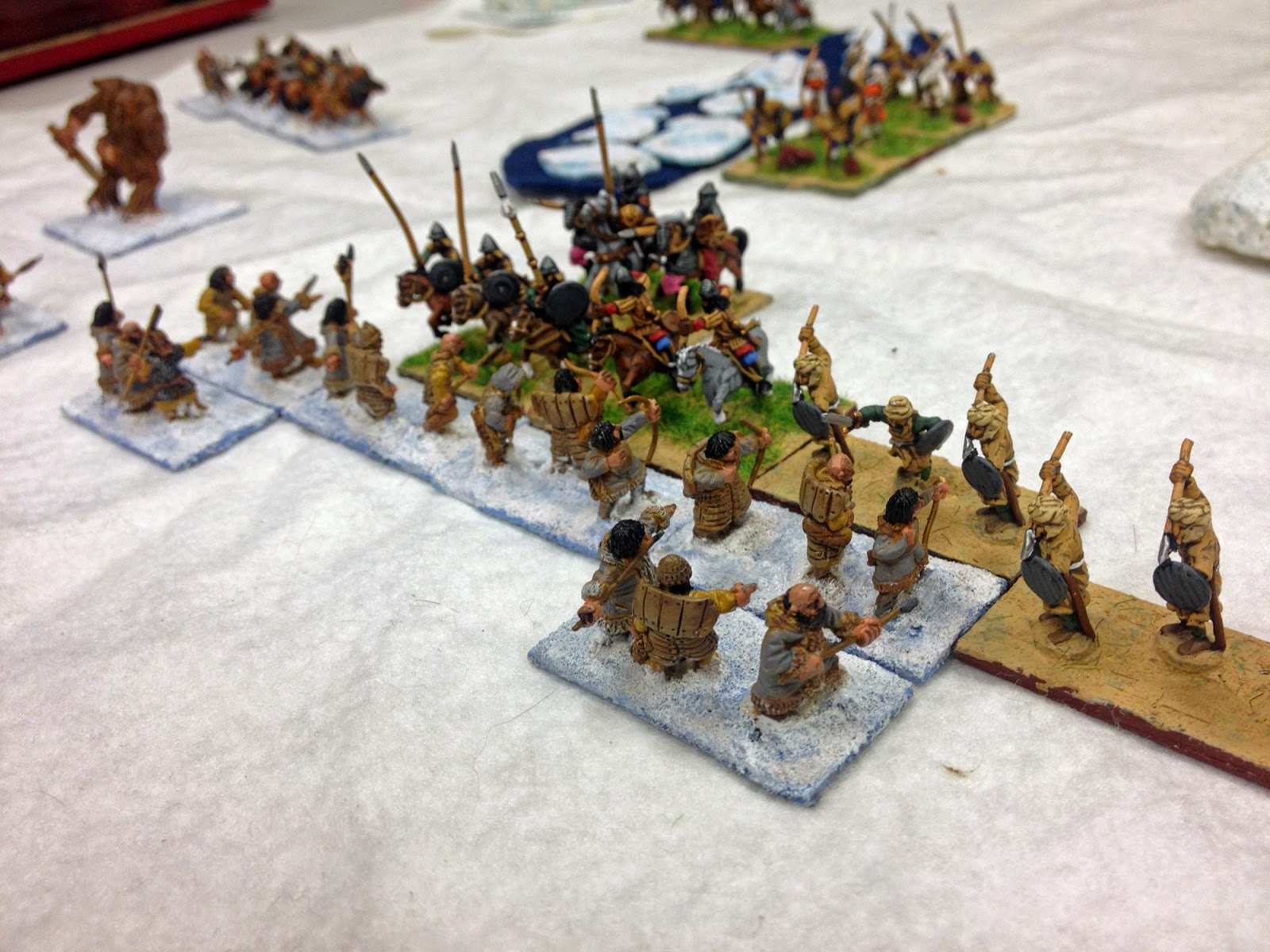 And a 6-1 split always comes in handy, when you're warband fighting an enemy Knight general. It also gave the Wildlings a victory in their first game. 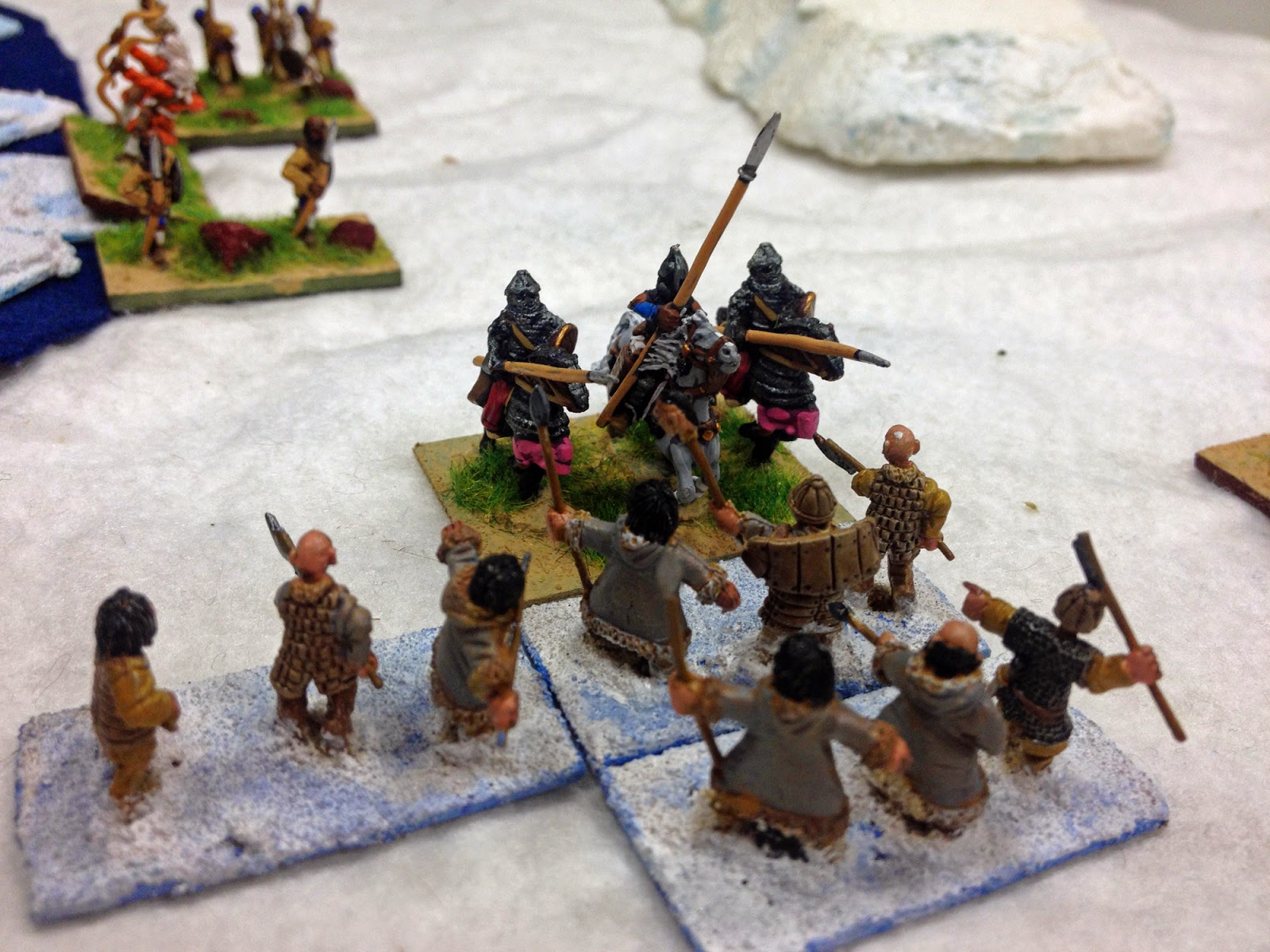 In their second game I attacked some Dwarves under Geoff. This was a straight Warband vs Blades fight in the centre. I lost. 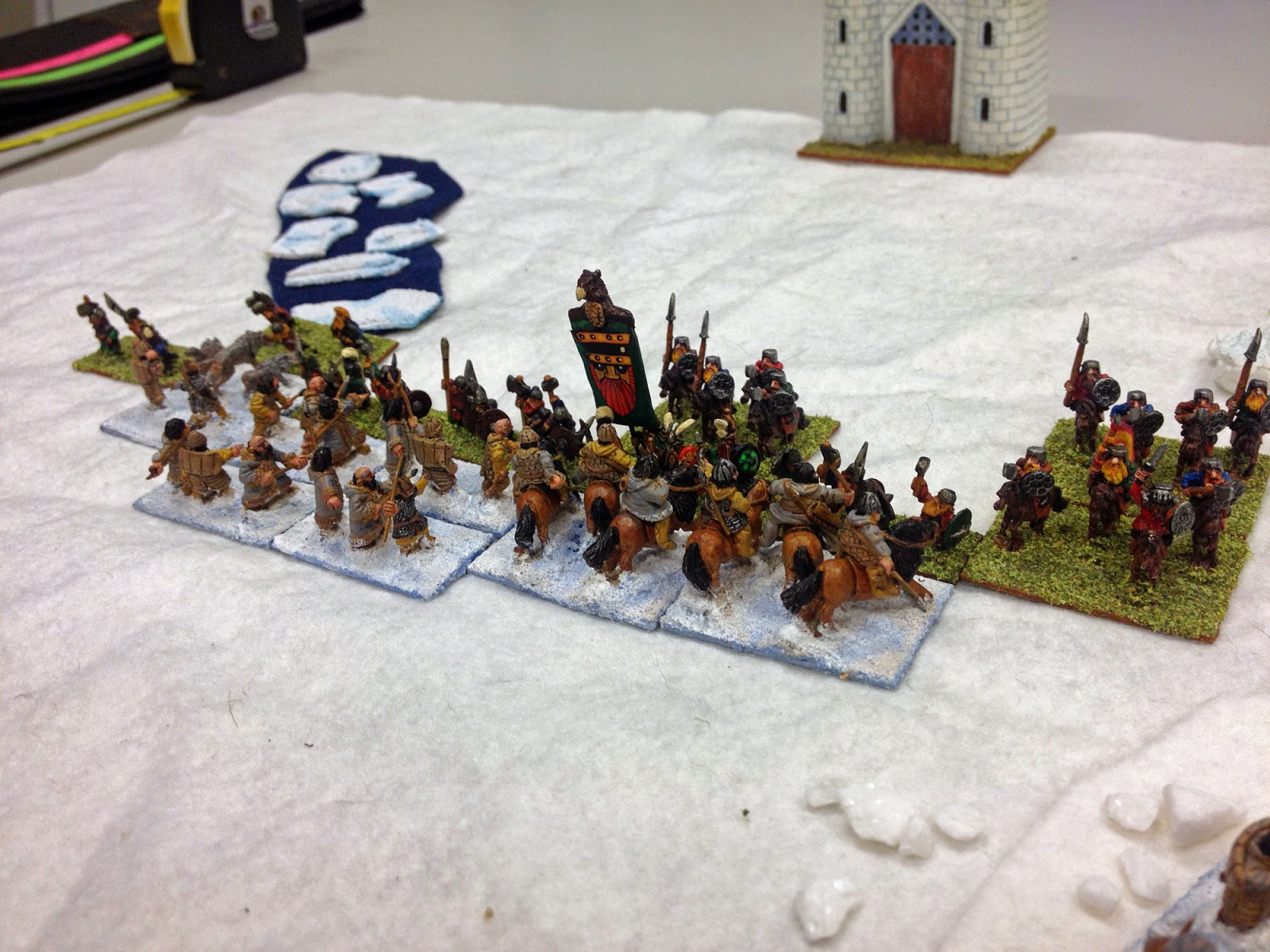 The giant and some archers held my right flank, but failed to prevent a defeat. 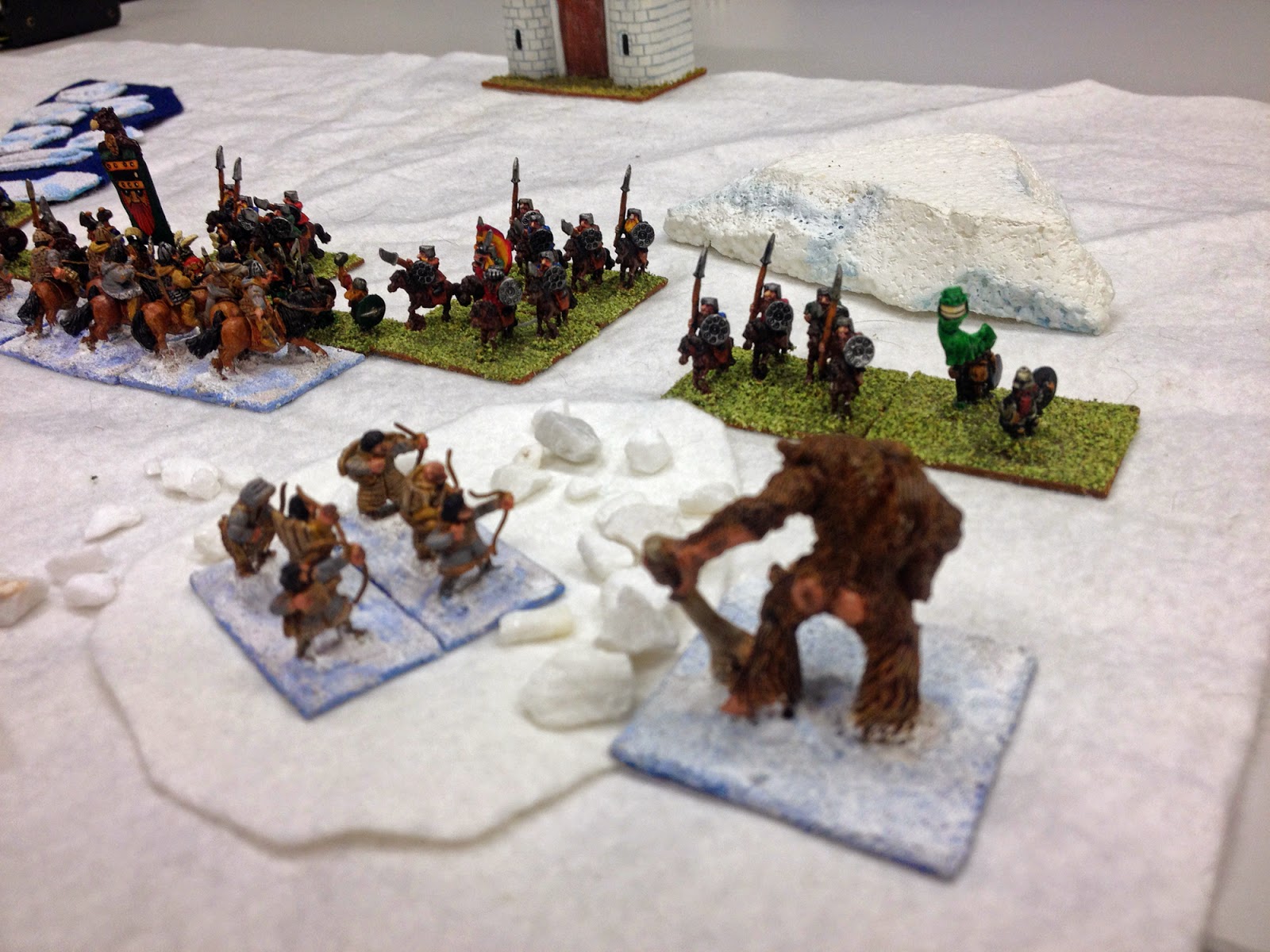 Geoff and Dave had already played a game with the Dwarves against a Medieval army, but I didn't get any pictures of that. Dave and John played each other in another games, with the Medievals facing the Arabs. I'm not sure who won, but at the point I took this photo it didn't look like it was a good day to be wearing a turban. 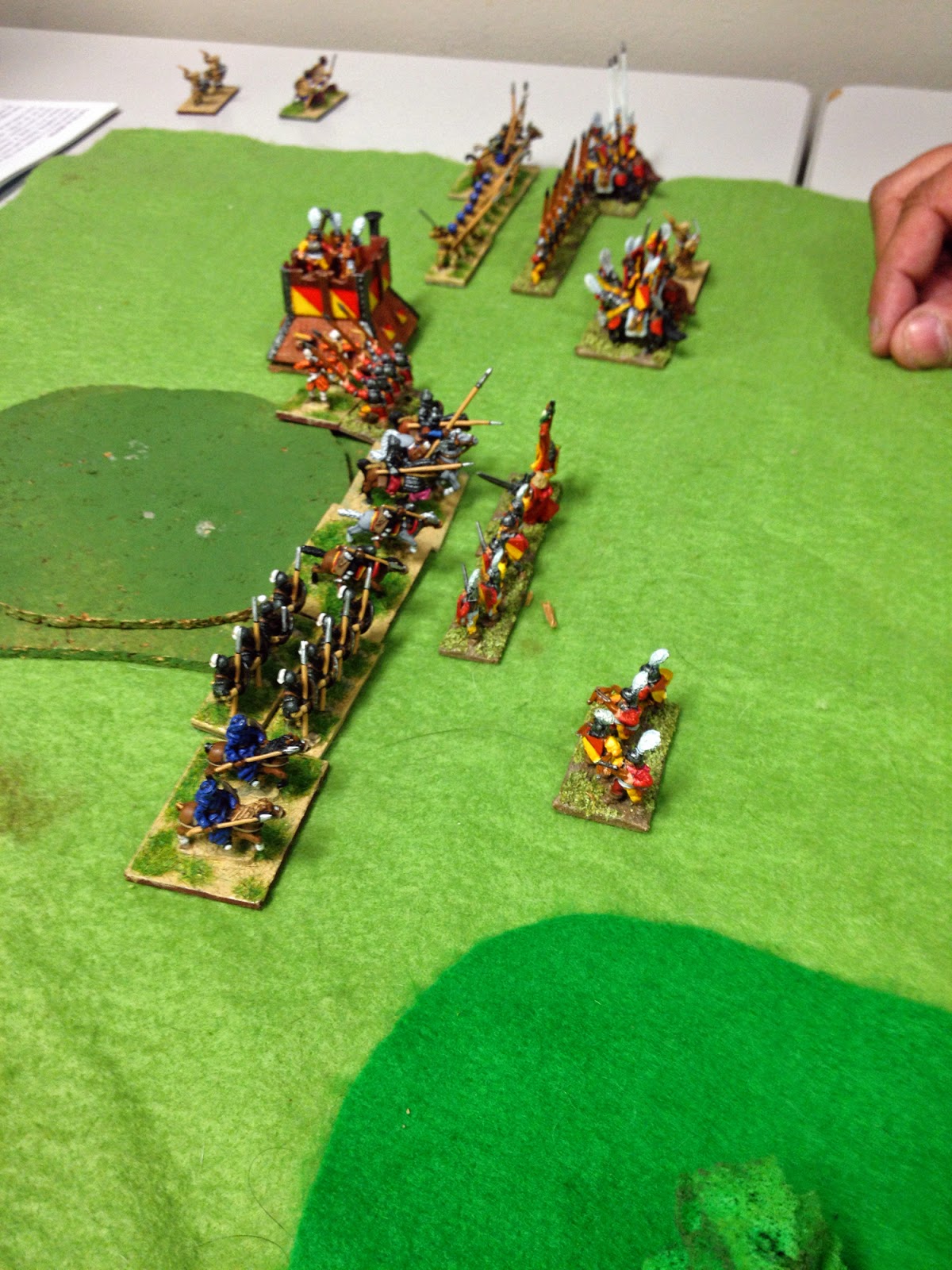 The Black Powder games were of the 3-2-1 format being tried out locally - small 'teaser' type games, with three units of one type, two of another and one of a third, such as three Infantry, two Cavalry and one Artillery. Each scenario presents a specific challenge to the players over preset terrain.

In this one two armies fight for the control of a central hill. 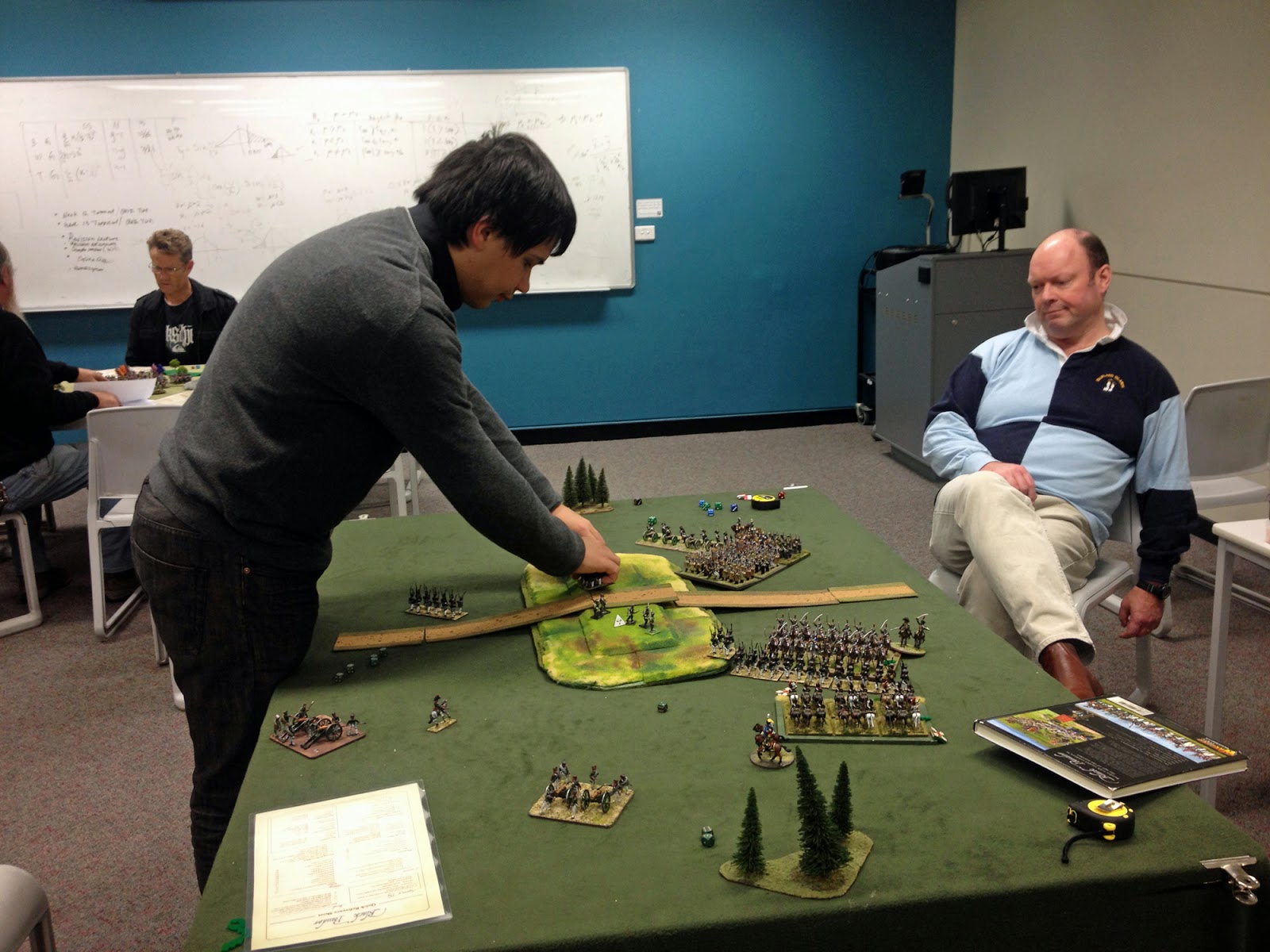 Meanwhile Peter and Bryan played a game in which the armies were trying to take the standards of the units opposing them; a tricky game where your best fighting units are also the objectives of the opposing player. 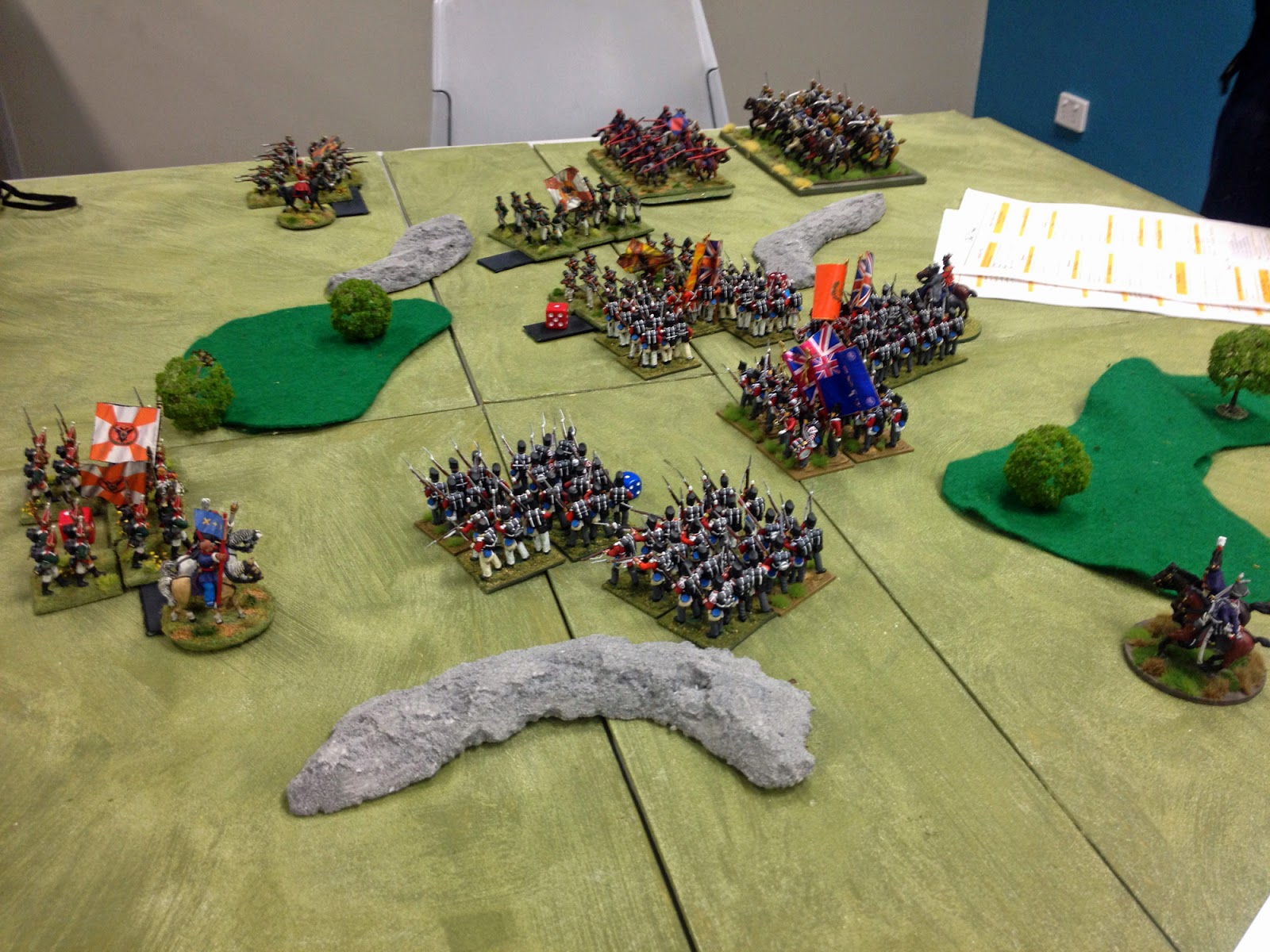