The Campaign For Alto Peru - Revisited

Whilst preparing my paper armies for Liberated Hordes, I have been looking at possible tweaks to the rules, and these have extended to the simple campaign system I designed a couple of years ago - The Campaign for Alto Peru.

I have had a few ideas for things I wanted to change in it for a while, and came up with one or two new ideas during the week, so this afternoon I thought I'd give it a whirl and try some of the changes as I went along.

Both sides generate a 12 element army - I decided to give each four infantry, one cavalry and one artillery, all at militia grade, then dice on a table to see what the other troops were. I then rolled to see if any elements were upgraded to regular or elite. This generated the following armies:

I dice for generals. The Patriots ended up with an Average commander, whilst the Royalists' was Good and also had the Organiser ability, which meant that he could choose replacements to his army instead of dicing for them.

I am looking at adding some random setup events to each game, and threw together a quick table of possible alternatives - surprise attacks, flank marches, allies and temporary unit upgrades. Before a battle both sides roll, and on a 5 or 6 they get a roll on the table.

In the first battle the Patriots defended. They also got the Surprise random event, which meant that their Royalist opponents had to set up in at least three widely separated groups, and suffered a command penalty on the first bound. In this picture the Patriots are in the foreground, whilst the three groups of Royalists are in the background. The setup led to an interesting battle, with the Royalists advancing a column of infantry through the rocky ground, whilst holding on the other flank with a force of infantry and artillery on a small hill. The Patriots launched an aggressive attack on the hill, leaving militia to screen the flank march. 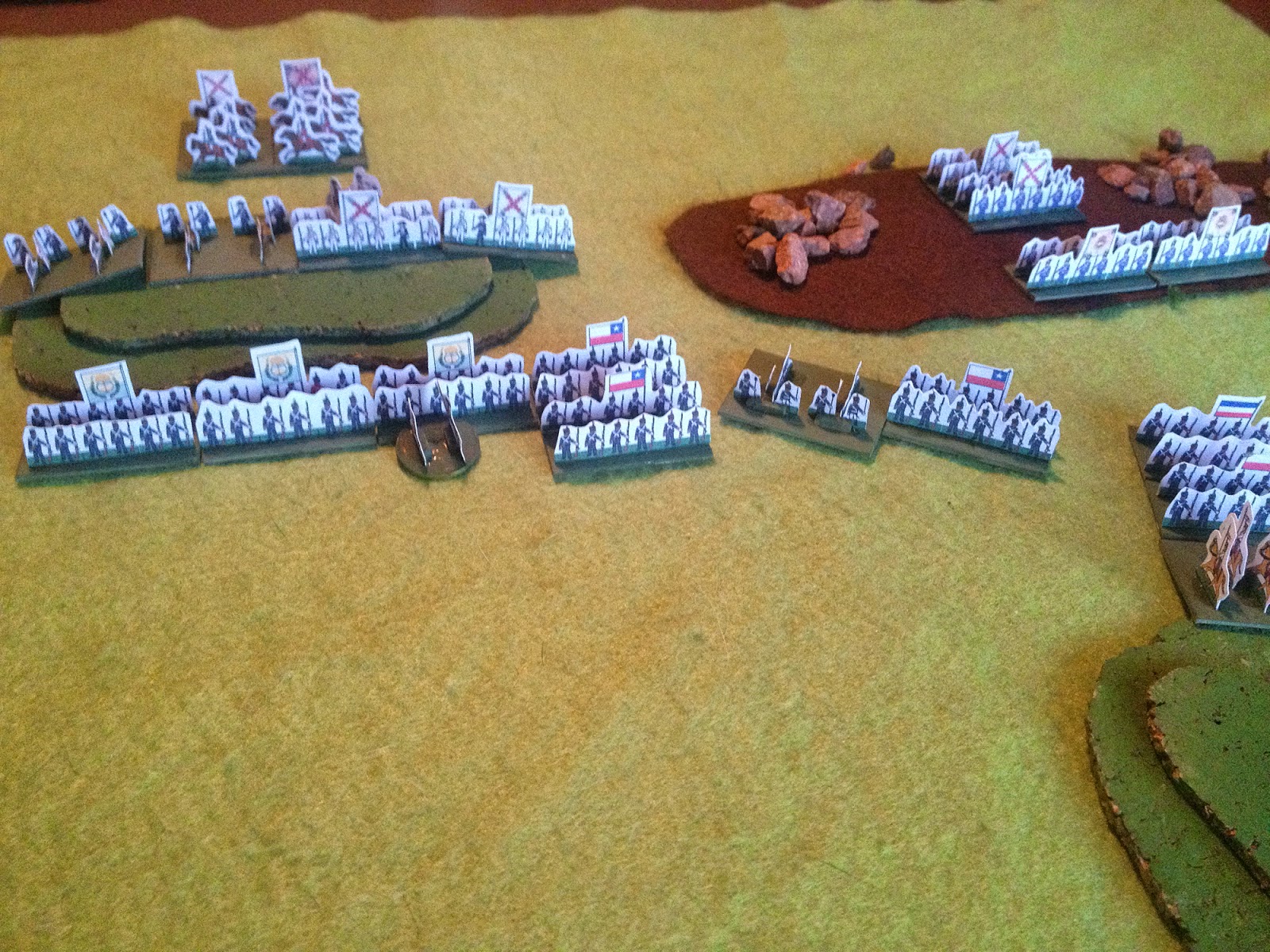 It was a close game; both side inflicted considerable casualties on each other, and by the end were on five elements lost each. But the Royalists got the next kill to win a pyrrhic victory. 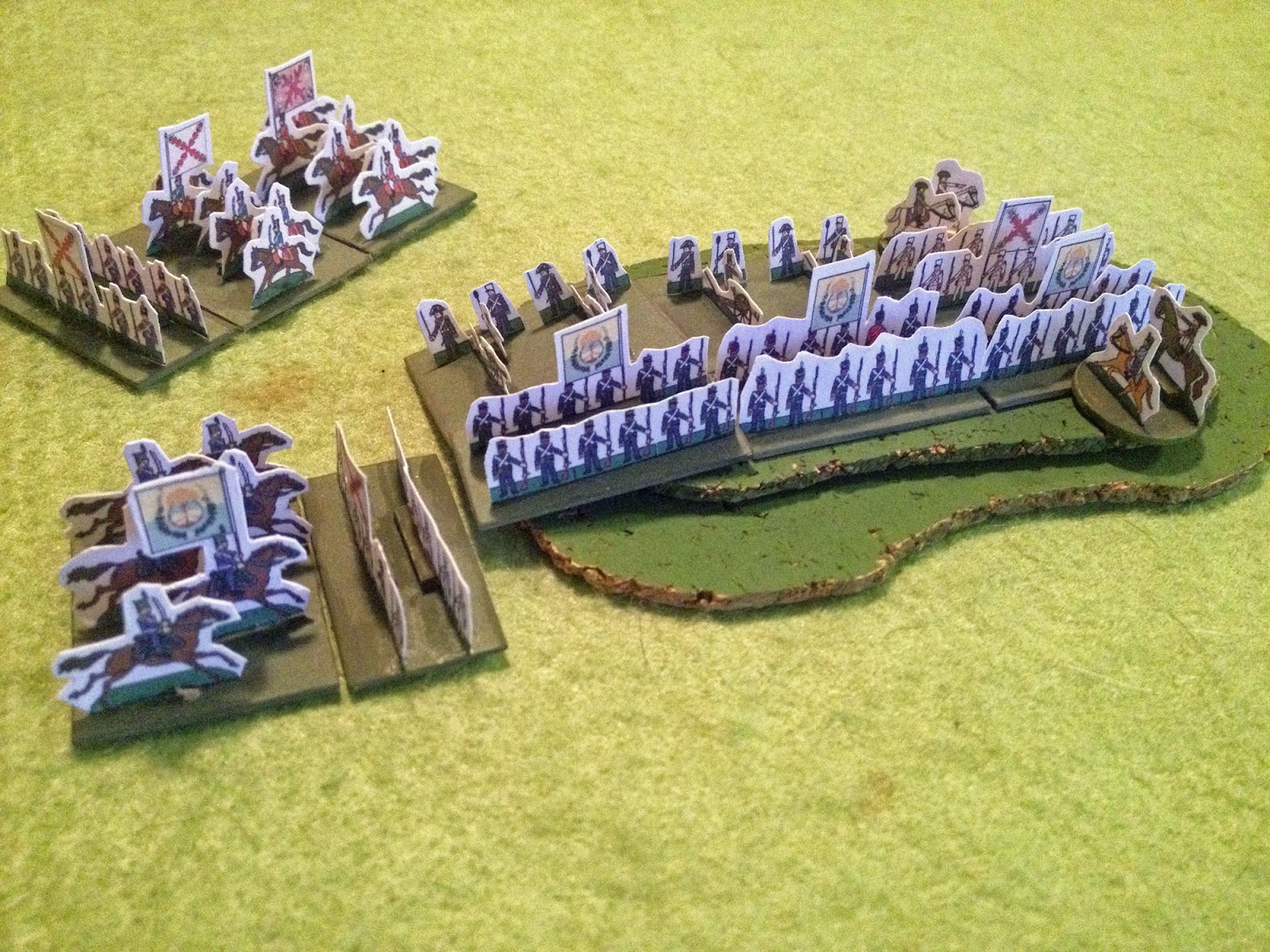 In the campaign armies are always 12 elements strong. But losing a battle gives you demoralisation points, whilst winning one reduces them. Before each battle you roll against you score; if you roll equal to or less than it then your break-point for that battle is 4 elements instead of 6. It's possible for both armies to fail this check, of course, if they both have demoralisation points.

The final step was the politics. Firstly I rolled to see if either general was replaced. Neither were. The roll for the Patriot general was modified because he lost the previous battle, but the junta decided that he deserved at least one more chance. Then the Royalists, as the victors, could roll to adjust the supply of political tokens in play, which are the actual means of campaign victory. They elected to take one from the Patriots and move it to the uncontrolled pile. This requires a die roll to succeed, and it did. This left the Royalists with 2 political tokens, the Patriots with 1 and 3 in the uncontrolled pile. If a side has no political tokens left, it loses.

Into the second battle. The Patriots defended again, and there were no random events. Because the first battle was so close, the Patriots only picked up 1 demoralisation point, so had an easy roll to ensure that their break point was 6 elements.

The armies were (in case you've lost track):

The Royalists made a strong attack with their right, looking to overwhelm the Patriot left with a massed infantry assault. 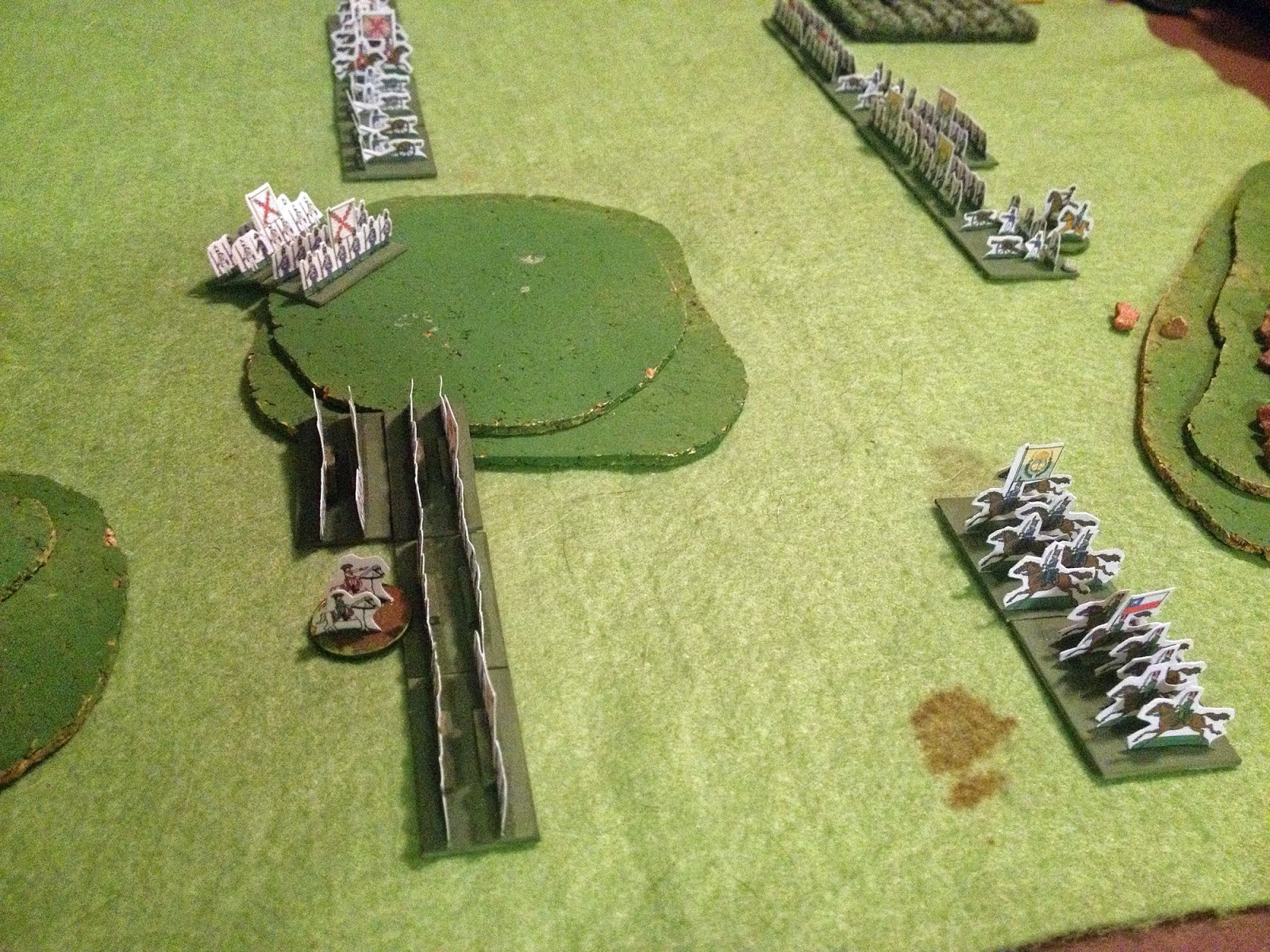 The Patriots responded by advancing their right, hoping to overwhelm the cavalry on the Royalist left with musketry. 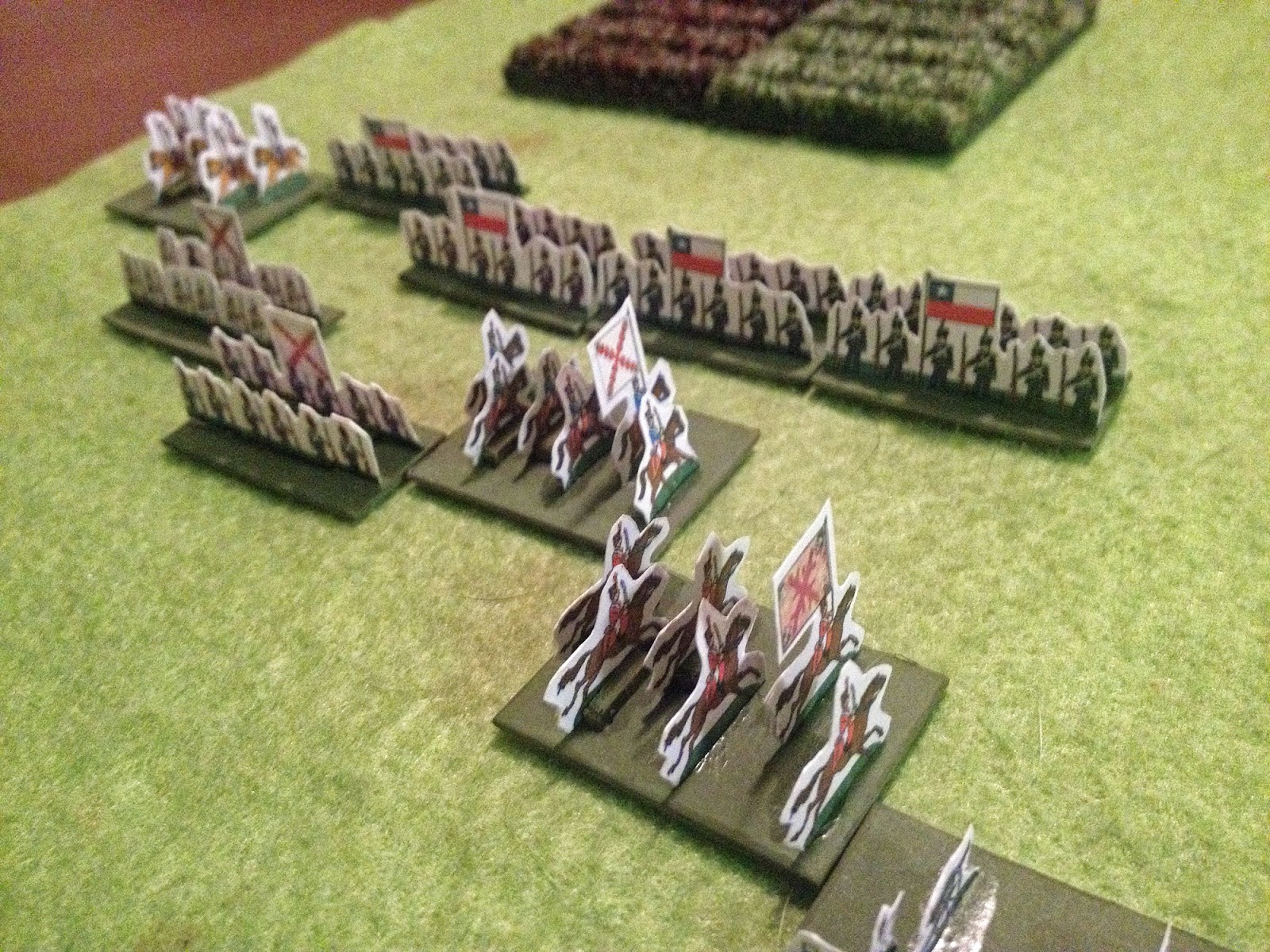 Fierce fighting saw both lines broken up, and a desperate Royalist commander had to divert most of his efforts to this part of the battlefield, stalling the attack on the other flank. 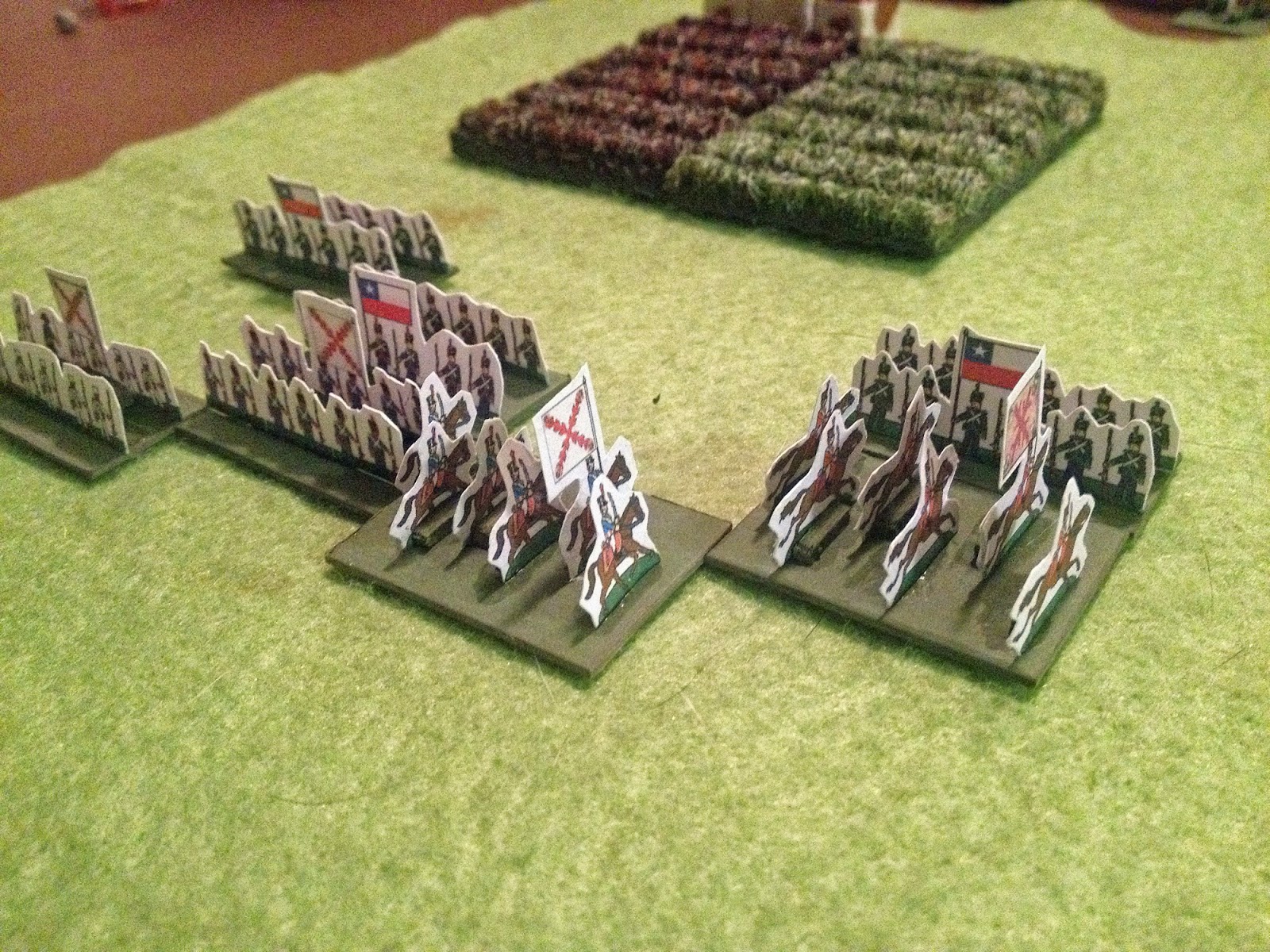 Deadly Royalist musketry prevailed, however, and the Patriots began to lose unit after unit. 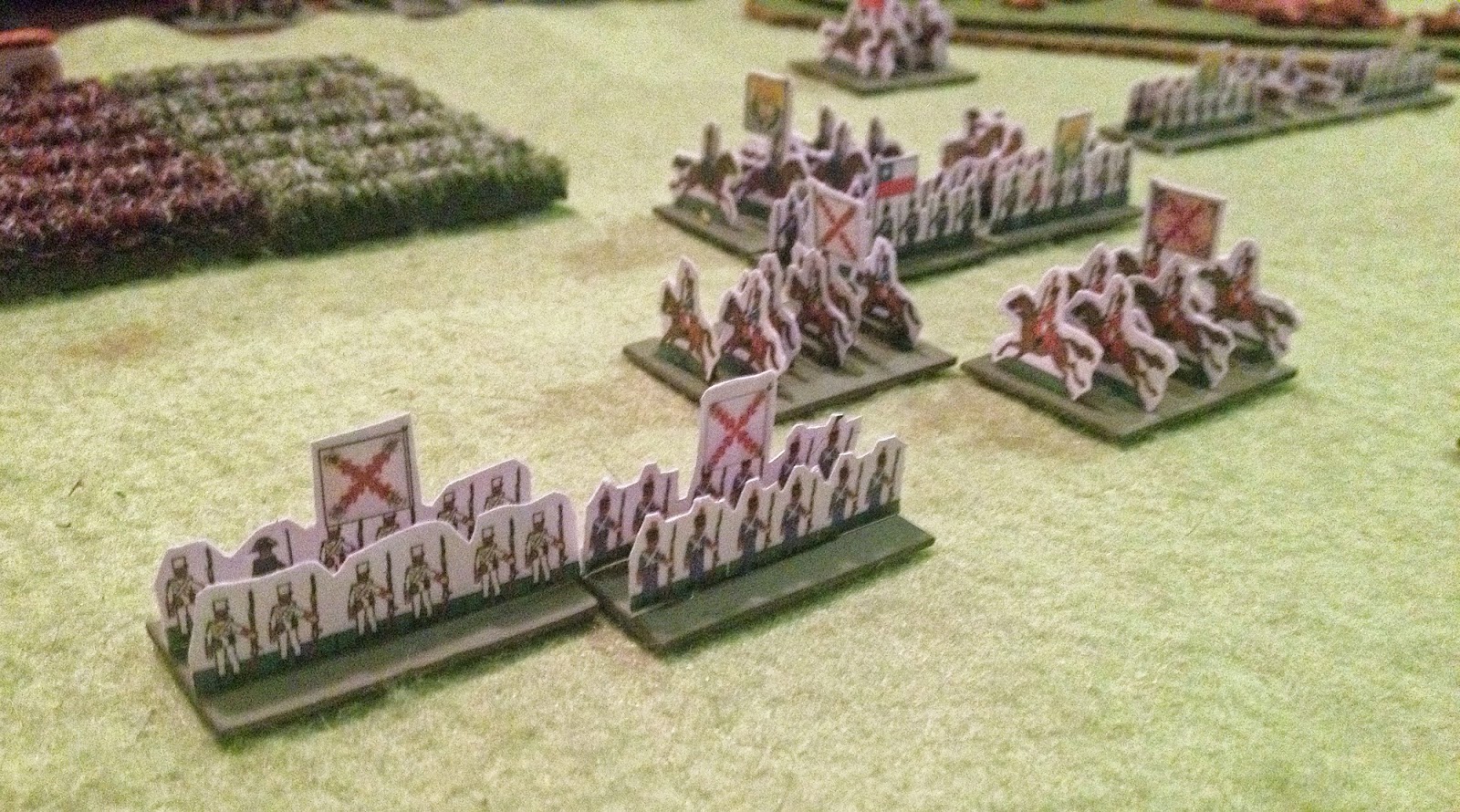 A final cavalry charge swept away an element of Patriot militia to give the Royalists a 6-0 victory. 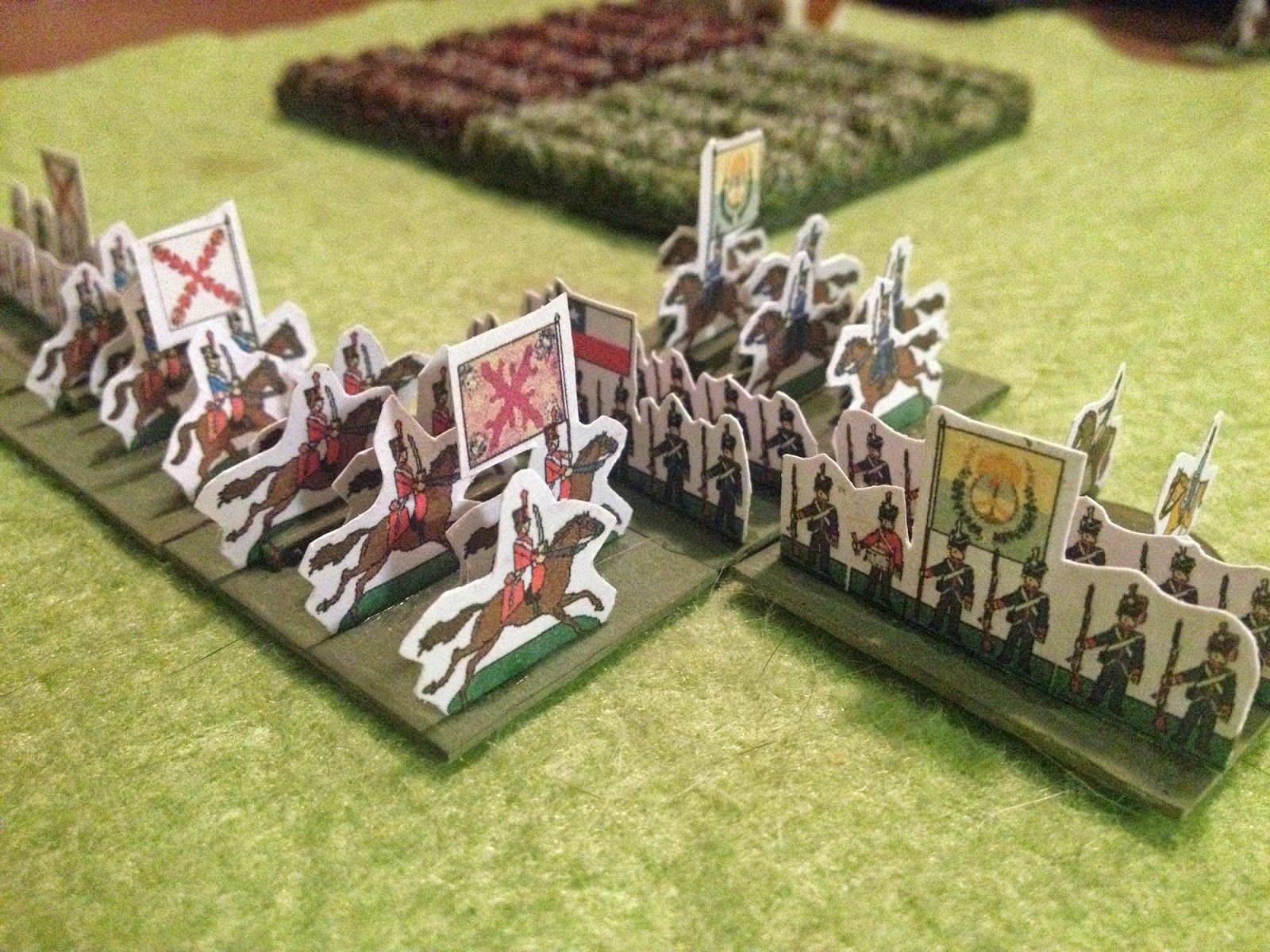 The main attack by the right flank was ready to go in, but was never needed. 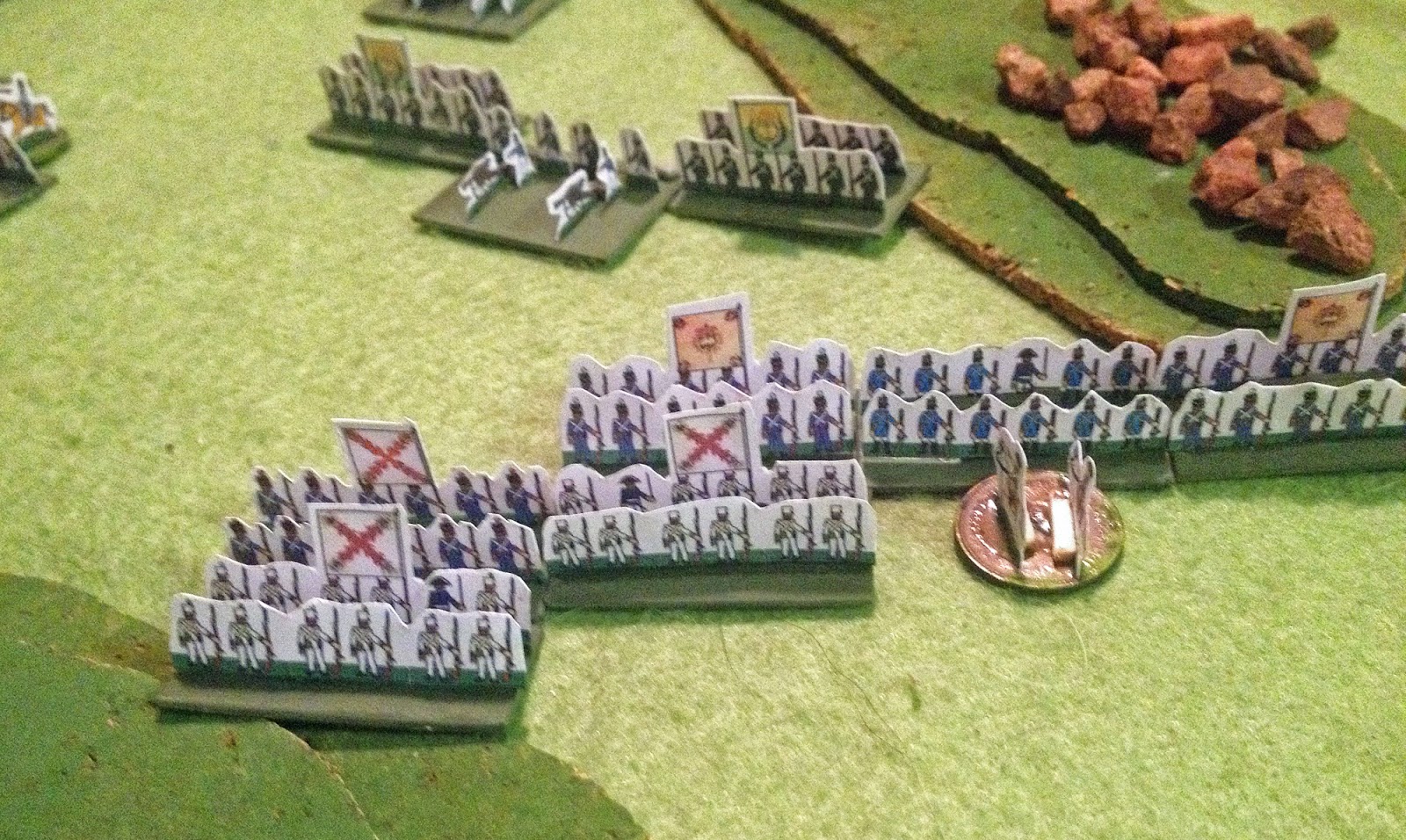 I rolled for recovered losses and upgrades as before, but the political phase ended the game. Whilst the Royalist commander was replaced (winning two battles in a row makes this more likely - victorious commanders either move on to political careers or get replaced by jealous superiors), they were able to roll against, and take, the second Patriot political token, leaving the Patriots with none. If there had been another battle the Patriots would still be looking at an uphill struggle, with an army of newly-recruited militia against a now experienced and enthusiastic Royalist opponent. And the replacement Royalist general was a Good one too.

Although I only played two games, the tweaks and changes I'd made to the campaign system seemed to be OK. What I do need to look at is how final victory works. The political token system works after a fashion, but I might not have it as the direct cause of victory or defeat. I'm juggling an idea in my head where the tokens and accumulated victories add to a side's political clout. A side can choose to use their clout to make a Proclamation - either of independence or of loyalty to the Crown - which gives them a roll to win the campaign. The more clout you have, the more chance the roll has of success. The caveat is that your clout is reduced for each Proclamation you make, so you need to make it when the time is best, or future ones have less chance of success. I'm still juggling the numbers on this idea though.