I'm currently rereading Bryan Perrett's 'Gunboat: Small Ships At War', and it has numerous accounts of small actions involving Royal Naval gunboats fighting pirates and other ne'er-do-wells around the world. So I felt inspired to set up a suitable 'Galleys & Galleons' game.

Really Victorian gunboat actions are outside the scope of G&G, but if you aren't too fussed about the detail they work fine.

I decided to run the game using the Cutting Out scenario from the rules, as it's one I'd not played before. It's a curious scenario, with a massive disparity in forces - 240pts of defending vessels vs a 60pt attacker. It was only reading it the other day, however, that I realised that the special rules kind of assume that the attacker might make use of captured vessels as well.

Anyway, I set up a port as described in the scenario; a dangerous nest of Chinese pirates. They had three small pirate junks, a couple of large merchant junks and a small fort. 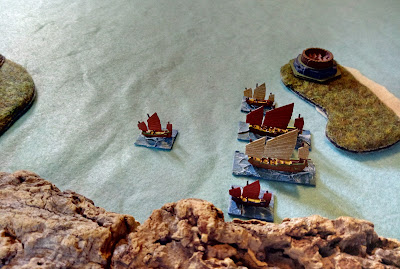 And steaming towards them, the gunboat HMS Possum. 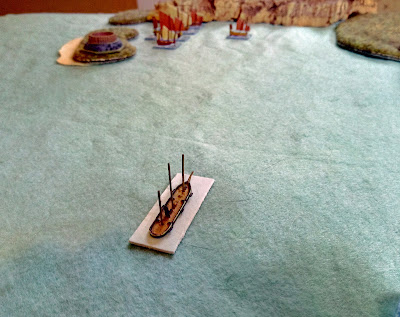 The scenario dictates that the defenders can't do anything until the attackers open fire or attempt a boarding action. Obviously this is where the use of a steam vessel breaks down a little, but I rolled with it.

One thing I did change in the scenario setup was that I assumed that the defenders were anchored. Anchoring isn't covered in the basic game (it's in the expansion), but I wasn't sure how the setup of the defending ships worked without it. The setup rules say that the defenders must be in irons, which is fine, but if the wind changes, then what? Having them anchored solves this, although it does mean that they ships have to spend actions to raise anchor once the fighting starts. 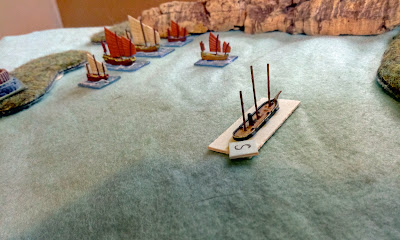 HMS Possum glided into the anchorage, and shaved close to a pirate junk, firing a broadside as it did so, and waking the pirates up. 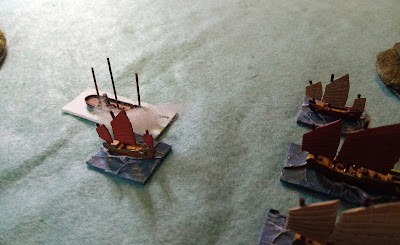 The small fighting junks raised anchor, and started to close on the gunboat. 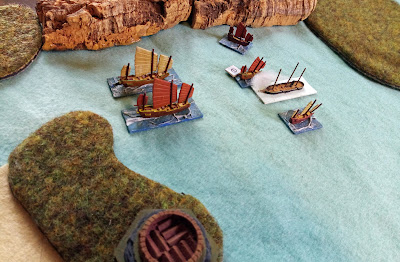 And the fort opened fire as well. However for the first couple of turns the defenders fight and fire with penalties to represent them being surprised. 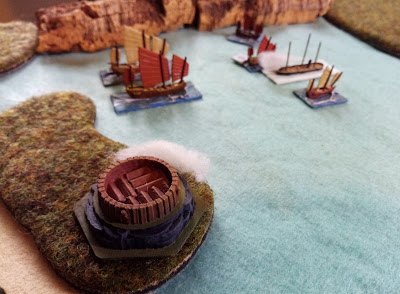 Hemmed in by pirate junks, HMS Possum moved to board one of the merchant ships. 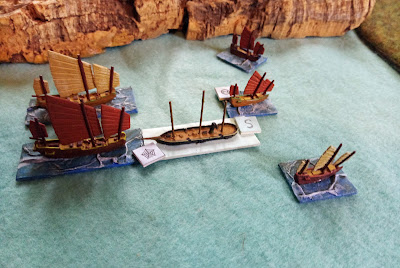 And that's where it all went wrong. A pirate ship grappled HMS Possum's stern, and the navy found themselves caught up in two boarding actions. They drove hard against the merchant crew, and almost held off the pirates. 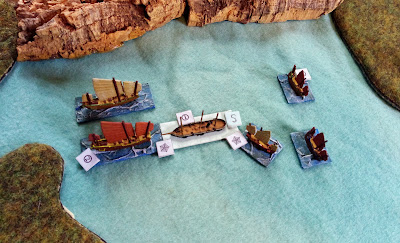 But a bad activation roll saw them strike, and that was the end of the scenario. 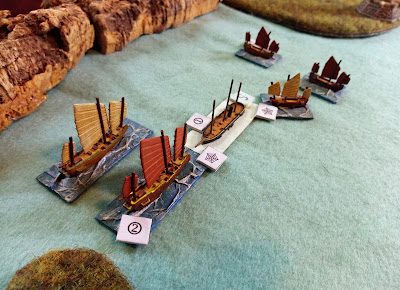 So all in all a rather embarrassing defeat for the Navy. To be fair, though, it's the first time I've played this scenario, and I'm not sure I picked the best means of picking up victory points. Ironically the best catches are the small pirate junks. Victory is based on how many points worth of enemy ships are captured or destroyed, and the pirate junks cost twice as much as the merchants, albeit that they have more fight. But sinking or capturing one, and then making an escape would secure a win. Going after the merchants in that setup was too risky for a single ship.

In fact the more I look at the scenario, the more I think it's one where two or three bases of boats may be the best attacking force, which more than makes sense in historical terms. But I will probably try it with the gunboat again first.

Here are the stats for the ships: