Usually if this blog touches on clothing it is items of a more feminine persuasion. And, let's face it, generally they are much more attractive than bloke things. Bloke things are pretty boring.

However on Saturday I went up to Sydney - to Newtown, specifically - on a shopping expedition. I didn't get what I went for, but I did come away with what appears to be some kind of Italian police or military greatcoat. I won't worry you with a picture of the exact item, because it needs  bit of a clean, but it's similar to this:


Mine lacks the stars on the lapels (not worried about that) but, unfortunately, also lacks most of the buttons at the front - four of the six are missing.

What I'm wondering is how easy it would be to source some replacements. However I don't really know precisely what I'm searching for, so I thought that I would turn to my loyal blog readers and see if they can give me a more accurate ID on what I bought. This is what the buttons look like: 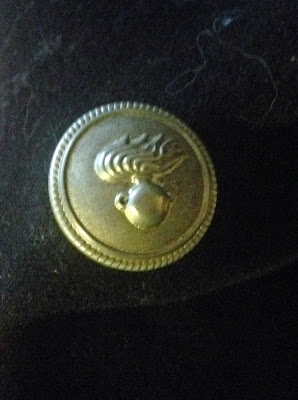 Any idea what that insignia is all about? On the back of the button are the words 'FMC, Napoli'. but I think that's just the maker.

If I can't find any replacements then I'll take off the two remaining buttons and just source six suitable buttons; I'd rather have them matching than accurate.