An Evening In The Arena

Having thrown a sickie last week I managed to get my gladiators down to the Gong Garage Gamers tonight. We didn't run any formal campaign structure for the bouts, and just played a series of simultaneous one-to-one duels; mostly because it's been so long since any of us played the game we couldn't remember how to.

We used my Munera Sine Missione rules (get them HERE), but tried out a few changes:

(i) No gladiator could get more than 6AP in a turn. A gladiator that rolled an unmodified 4 or more always got at least 1AP, regardless of penalties.

(ii) We used the fatigue rules suggested by the Southern Battlegamers - a gladiator takes a fatigue point when they attack and miss. In addition fatigue (as in the number of fatigue points you have exceeding your current strength) just caused -1AP for the rest of the game. It's simper to keep track of that way.

(iii) Armour save rolls were simplified - you now just roll equal to or less than the number of armour points you have, rather than adding the points to a roll and trying to beat 6. In other words, you now roll low to save, not high.

Anyway, we managed eleven bouts during the course of the evening, with an interesting selection of gladiators. Here are the pictures.

My cork tile arena wins no prizes for looks, but has been in use for ten years now. We ran four fights at a time (three after Geoff left). 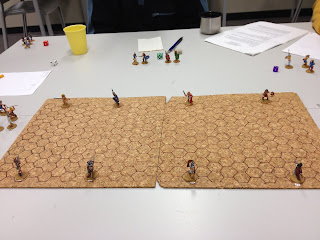 An early bout, showing off some of my female gladiators. Indeed, owing to my purchasing figures from numerous manufacturers over the years I seem to have as many female gladiators as I do male ones. I don't worry about mixing them in games - it didn't happen in reality. 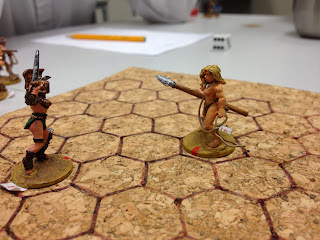 A heavy gladiator gets driven back by a pointy stick. 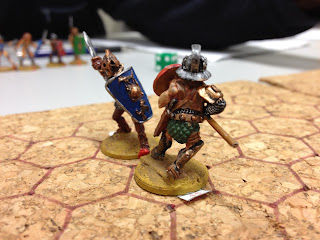 A gladiator is netted. 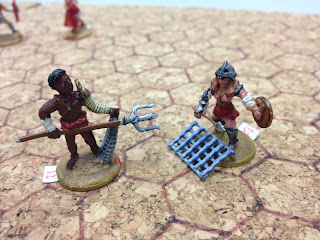 I still have more Foundry ones to paint, as well as some Shadowforge figures. 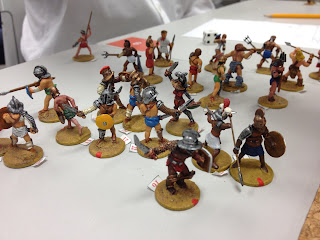 A Thracian backs a Gaul up against the wall. 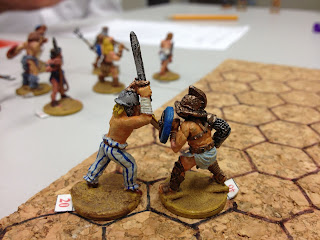 The longest fight of the night - a heavy gladiator dubbed 'Mongo' faced a barbarian woman with no armour but a big shield in a classic fight of protection over mobility. 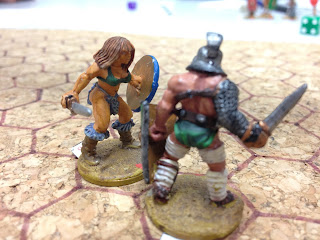 Mongo started badly, but once he got into his stride he seriously wounded his barbarian opponent. Sadly he then took a lucky blow to the side, and dropped his sword, and things went downhill from there. When he finally fell the crowd decided that they'd never liked him anyway, and he was dispatched. 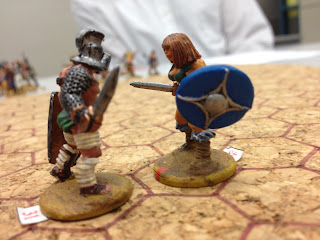 Another gladiator gets netted. 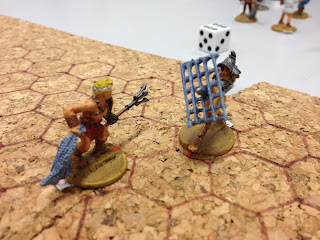 Dropped shields were a regular feature of the night. 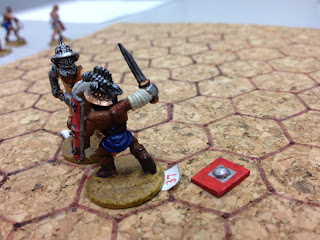 The crowd were hard to please; a lot of defeated gladiators were dispatched, despite taking part in entertaining (i.e. bloody) fights. And yet they spared one lady gladiator who pretty much stood in the middle of the arena and allowed her opponent to trip her up.

I'm probably getting another go at this game tomorrow, as one of the Sydneysiders is visiting me to go through some of the changes and additions they've made to the game.