Chacabuco with 'Simplicity in Practice'

I thought that it would be interesting to try an historical action using Neil Thomas's  Simplicity in Practice rules, so I decided to have a go at Chacabuco. It's a nice small action and, when I tried it with my own Liberated Hordes rules, it gave a couple of interesting and close games.

I made two changes/additions to the rules as written. Firstly I used Elite and Raw units. The former ignore the first DP inflicted on them, whilst the second start the game with one DP already inflicted. Secondly I refined the modified melee system I used last week. Both sides roll 4D6 in melee. The side with the most advantages, as listed in the rules, gets an extra 2D6 for each such advantage. A flank/rear attack counts as two advantages for these purposes. Each dice which scores a 4+ is a hit, and the side with the most hits wins the melee. In the event of a draw, the side which rolled the fewest dice wins.

The forces were as follows:

Victory would go to the first side to rout at least half of the enemy units.

This was the setup. I used a 16" square board, units on a 40mm frontage and reduced all distances by a half. The Patriots all started off-table, most in the foreground and with the flank march appearing to the right. The Royalists were set up along the hill-line in a roughly historical deployment. 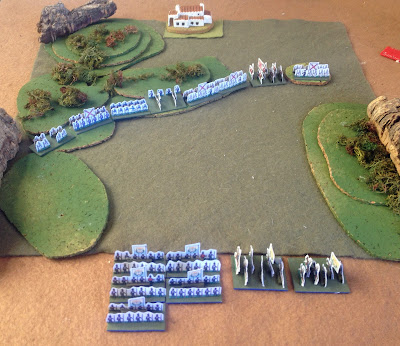 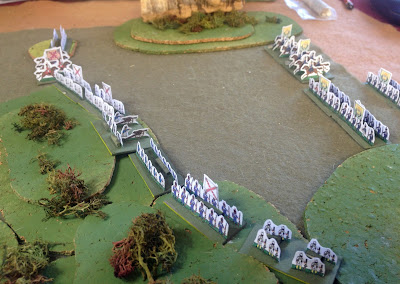 The Royalist skirmishers moved out to take the advancing infantry under fire, and the Patriots turned a unit to engage them. 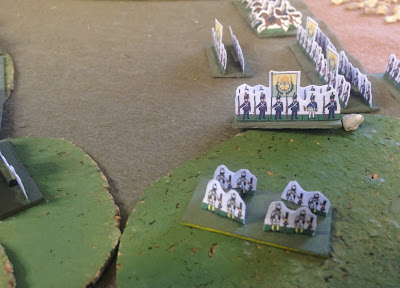 Meanwhile the rest of the Patriot force advanced cautiously, hoping that the flank-march would appear. The Royalists opened up a steady fire from their artillery. 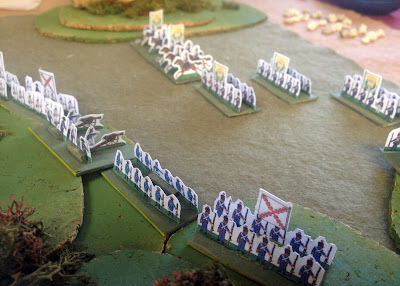 The Patriot cavalry charged its Royalist counterparts. The Royalists had more support, but the Patriots counted as better formed, since the Royalists started with a DP. This was an even fight. 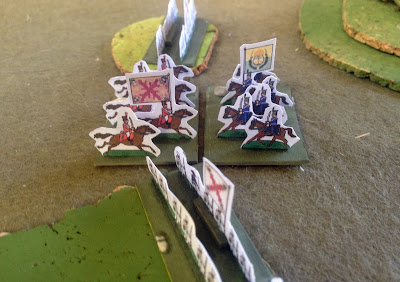 The Patriots were repulsed. 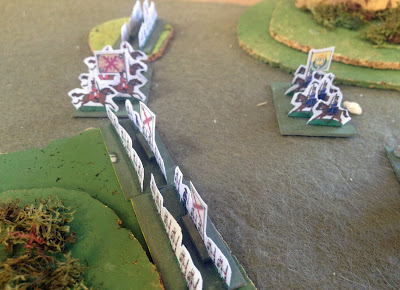 The Patriot infantry was now engaged in a firefight all along the line. To the right of the picture two Patriot units were shooting at the Royalist skirmishers, who were now looking a little weak. 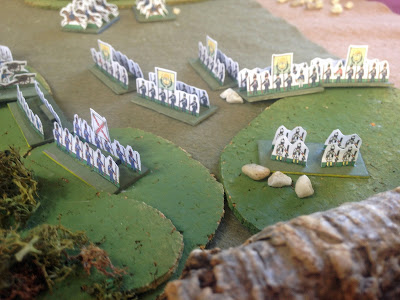 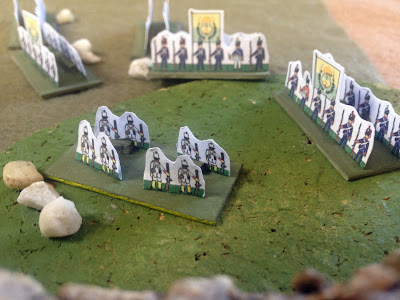 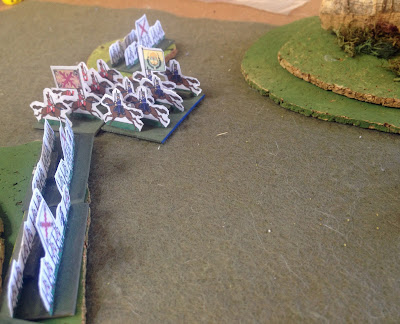 It retreated as well. 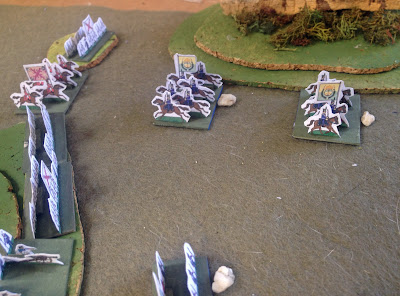 With the Patriot infantry now tied down in a firefight, the Royalists swung a couple of units out of their line in order to fire on the Patriot cavalry 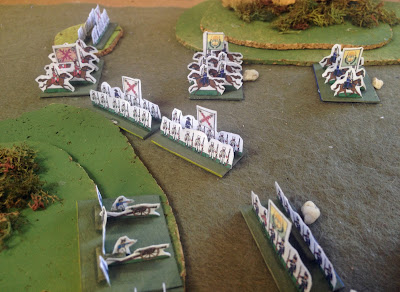 This left the cavalry with little choice but to charge in again and try and break through the Royalist horse. 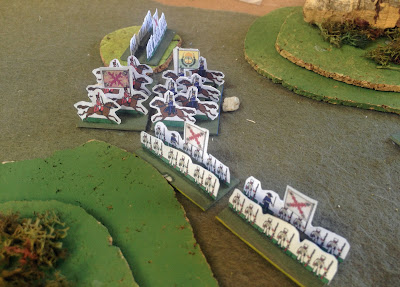 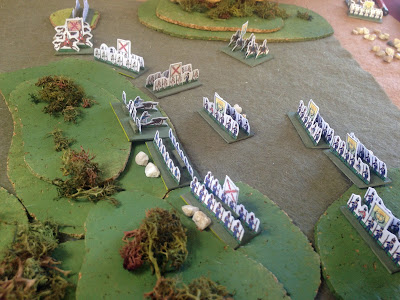 The Patriots reorganised in order to get more muskets to bear. 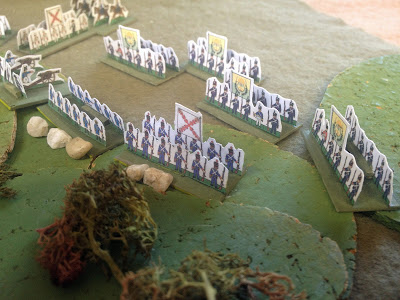 Royalist infantry turned to bring the Patriot line under fire and got charged in the flank by Patriot cavalry (even playing solo it's possible to make silly mistakes like this). 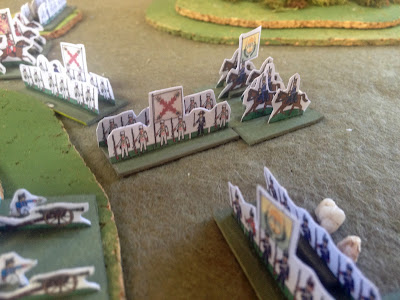 The Royalist infantry retreated to the hill, and the exchange of fire between the lines continued. At this stage neither infantry line had enough of an advantage to consider a full charge. 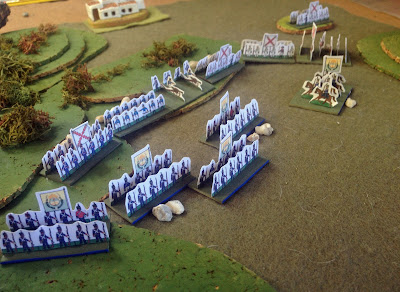 The Patriots had worked an infantry unit onto the Royalist flank. It charged ... 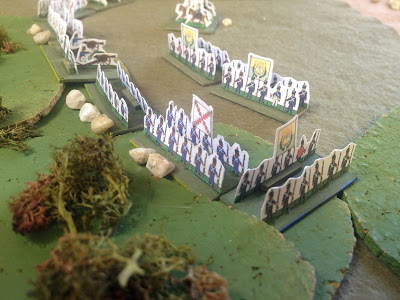 ... and the Royalists fled. In addition another unit was lost to musketry. 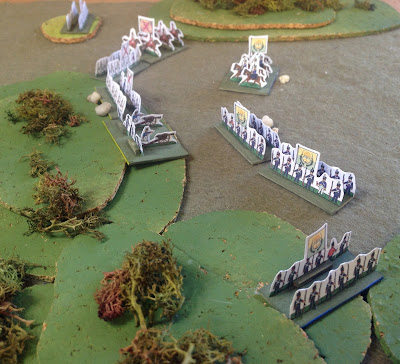 Both sides were no getting close to breaking, and the Patriots still hadn't seen any sign of their flank march. The Royalist cavalry charged again, whist their artillery kept up a steady fire on the Patriot's Argentinian infantry. 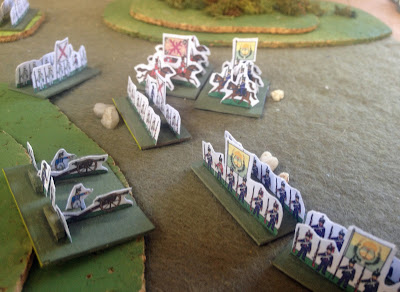 Again the Patriot cavalry was driven back. 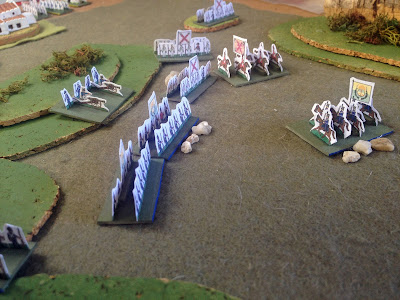 The Patriots pulled back their weaker units so that a sudden break didn't see their army collapse. It was getting that desperate. Meanwhile the Royalist cavalry charged again; if it defeated the Royalists this time, the battle would be lost. 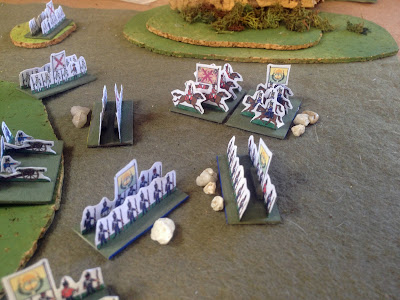 The Patriots won their first cavalry combat, staving off defeat! 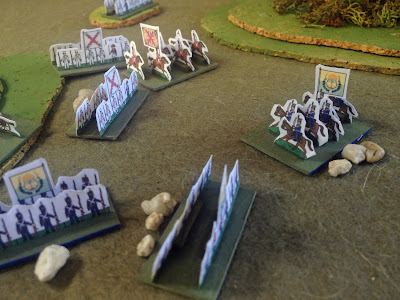 Both sides took time to reorganise, looking for an opening that would break an enemy unit and give them victory. 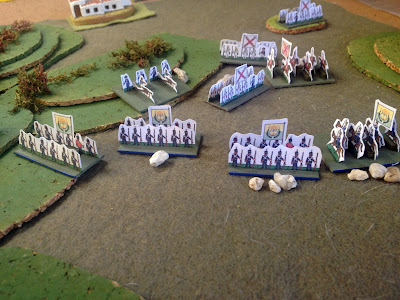 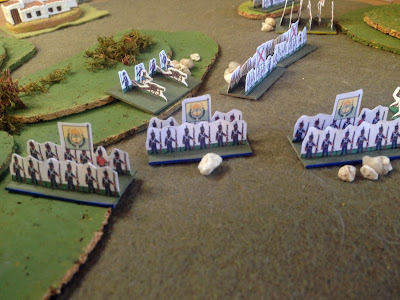 At that moment the Patriot flank march showed up. 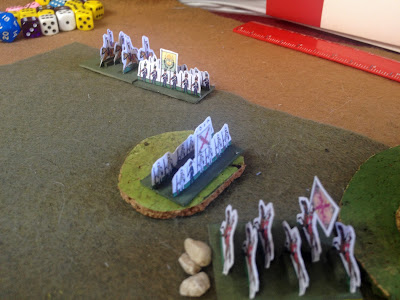 This was a very close game, with god and bad luck on both sides. The Royalist cavalry were the true stars of the battle, only losing one close combat despite their downgraded status. Sadly the combat they lost was the one that could have won them the battle. The Patriots struggled towards the end, not quite having the numbers to keep moving forward and put pressure on the Royaists at the same time. The flank march would have been helpful there, forcing the Royalists to deploy at least some units to meet it.

I'm tempted to try this battle with Black Powder now - it will be a small game, but it will be interesting to see how  third set of rules covers it.
Posted by Kaptain Kobold at 17:04