The Battle of Tucuman

In 1812 General Belgrano was in Upper Peru reorganising the Patriot army after their defeat at Huaqui the year before. Before he could start operations against the Royalists he was recalled south by the junta in Buenos Aires, who were fearful that Royalist forces were threatening them. The Royalist commander, Brigadier General Tristan followed him. Eventually Belgrano decided to disregard his orders, and make a stand at the town of Tucuman. The Royalists advanced to meet him there.

The Royalist army initially approached the city from the north, but on the 23rd September they swung around and marched to attack it from the west instead, forcing the Patriots to redeploy in response. A confused battle ensued, in which the numerically superior Royalist forces were hit hard by the Patriot cavalry. In the chaos Belgrano thought the battle was lost, and fled the field, but the Royalists fell back at much the same time, eventually retreating to the town of Salta. The confused Belgrano failed to pursue.

I decided to refight this battle this morning using my Liberated Hordes rules. I have played it a couple of times in the past using a variant of 'Rocket's Red Glare', and it gives a close fight, with the Royalists having superior numbers, but the Patriots having an edge in quality and hard-hitting cavalry.

I used the scenario from John Fletcher's 'Liberators!' as my guide, but also the refight from Steven's Balagan in which he has the armies deployed in opposite corners, which I thought nicely reflected the Patriots responding to a Royalist advance from an unexpected direction.

The forces, derived from John Fletcher's book, are:

The rules for the generals' quality can be found HERE

I had each side deploy in opposite corners of the board, according to some rules I devised for my mini-campaigns covering surprise attacks. Each army had to deploy in three groups, each of at least three elements (I slipped up with the Royalists there, but it wasn't important) and with each group more than one base width from any other group. The distance stops the groups immediately filling the gaps to form a continuous line.

Thus the battle begins with neither army in a position to fight effectively; victory would go to the one that could organise their army first.

Here's the setup, with the Royalists at the bottom-right and the Patriots top-left, before the town of Tucuman. 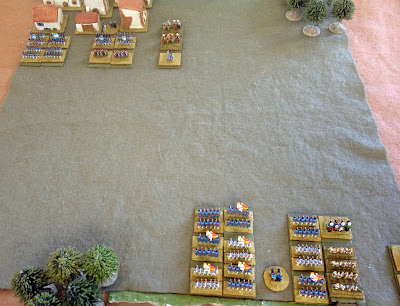 The Royalist army. As you can see the group on the far right has only two elements. The army had just crossed a stream, so I included it as battlefield garnish. 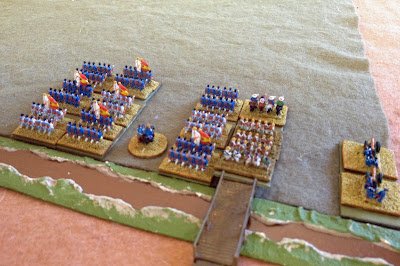 The Patriots and the town of Tucuman. The attractive blue sky behind it was to hide the sewing machine that's sharing the table at the moment. My wife is making a replica Regency gown for a ball were going to in a couple of weeks. 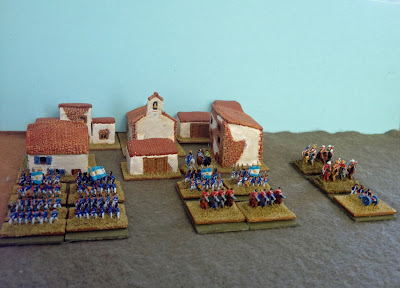 The Royalists started to organise their line, albeit slowly. Their decent regulars are on the right, behind their single element of cavalry. The rest of the infantry is militia. 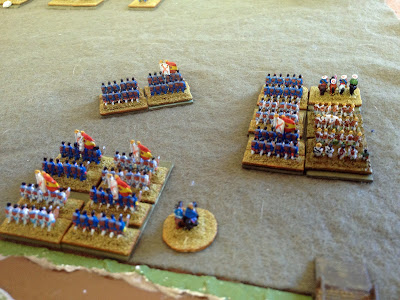 The Patriots also formed up slowly. The small white stone represents the unit the general is currently with; unlike conventional HOTT, in Liberated Hordes the general can move from element to element. 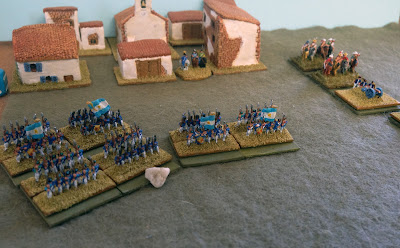 Whilst the infantry was being chivvied into line, the cavalry swung out wide in order to delay the Royalist deployment. 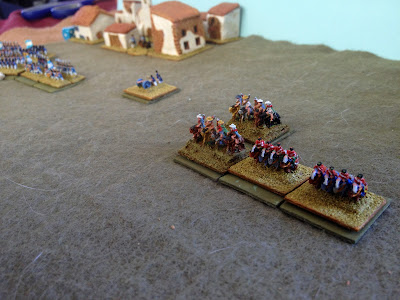 An overview of the early stages of the battle. The Royalists had got half of their infantry into position, but were now threatened by the Patriot cavalry. The Patriot infantry was still struggling to form up under Belgrano's rather apathetic direction. 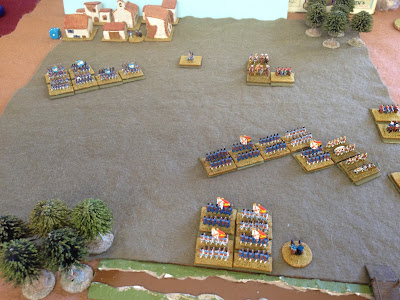 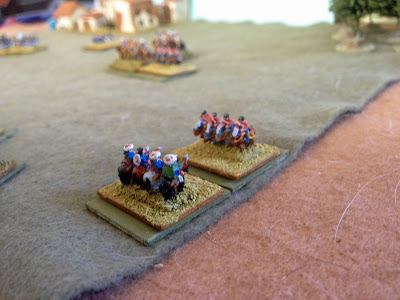 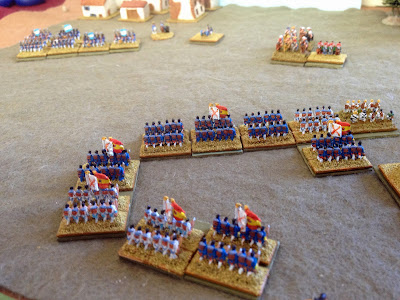 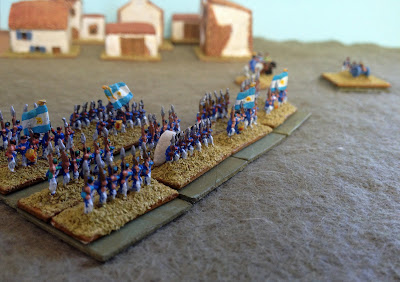 And here it is; the key moment of the battle. With his militia cavalry in trouble, General Tristan personally brought up some infantry in support. More Patriot cavalry joined the fight, and the infantry were ridden down, with General Tristan being unhorsed and captured. The Royalist army was now leaderless. 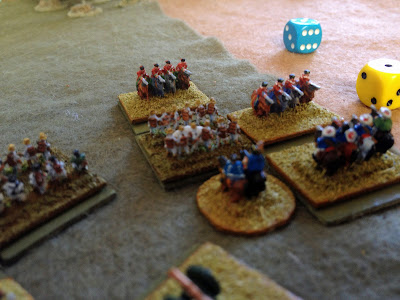 On the next two turns the Royalists rolled '1' for PIPs, which meant that, with no general, they couldn't move a thing. Their cavalry was routed, and their artillery threatened. 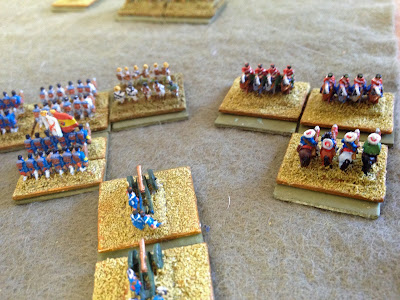 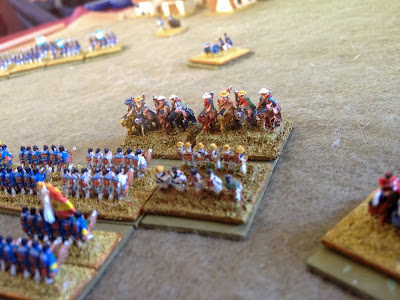 Another overview. On the left of the picture the Patriot infantry was advancing, whilst in the centre the Patriot artillery was supporting the cavalry attack. The gauchos had fallen back, but the regular cavalry was still threatening the Royalist right flank. 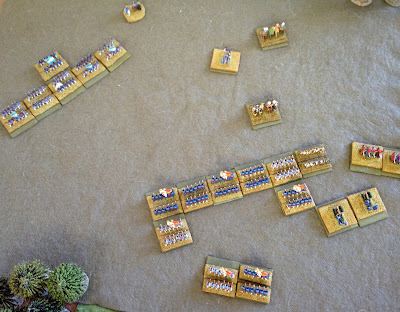 The Royalist artillery rushed to deploy, but was ridden down. 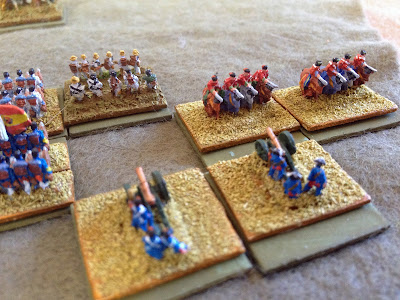 Infantry came up in support,but the Patriot horse was now unstoppable. 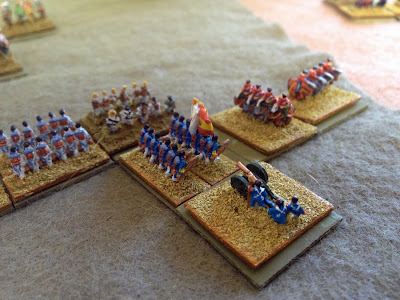 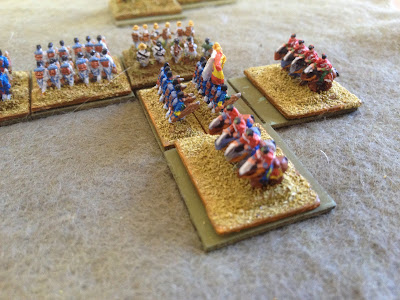 On the other flank the infantry were now exchanging fire. 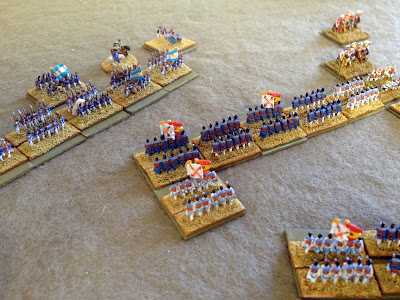 Both lines suffered, but the Royalists suffered the most with their lower quality troops edging back. 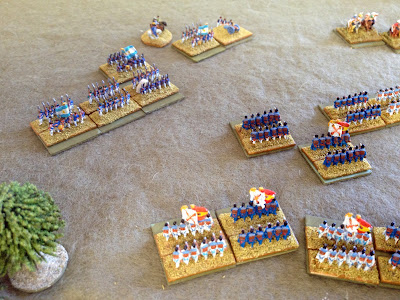 The Patriot horse now swept into the Royalist rear. 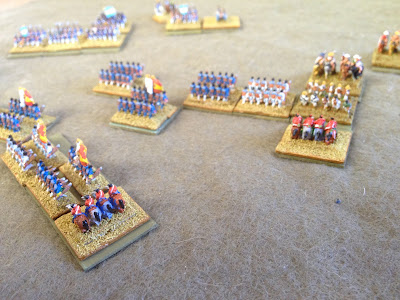 More militia routed from the rampaging cavalry, and when the other Royalist regular infantry element was lost the army broke. 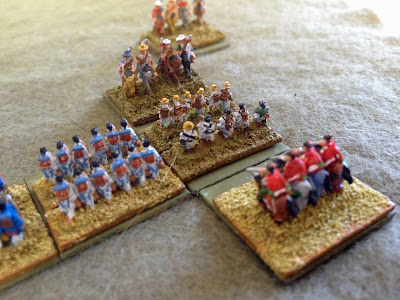 The final position. The Royalist line was a mess, whilst the Patriots still had some organisation. 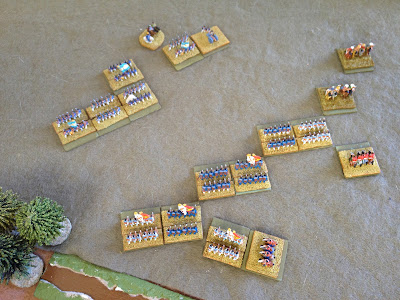 Patriot losses - one Regular Infantry, lost during the musketry exchange. 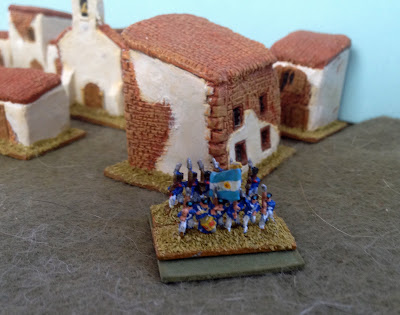 For all that it was something of a disaster for the Royalists, this was due mainly to the early loss of their general, and had he survived I think it would have been a far closer fight. I didn't include any rules for General Belgrano panicking and quitting the field, as I wanted to see how the game would play out normally. For Belgrano's panic I might treat him as a Coward (see above for link), but without the penalty on influencing combats that ability has. That way he can actively command and influence his army until something goes wrong close to him, and then he may panic. Belgrano managed to rid himself of his Predictable trait early in the battle, and his victory was won despite his Poor trait inflicting a PIP roll of '1' on him at the height of the battle. By that time guns were firing and the cavalry was engaged in its own right, so his lack of command didn't matter that much.

This is a battle I will try again, I think.
Posted by Kaptain Kobold at 15:17