Tonight is census night in Australia, where 26 million of us take time to pause, reflect and then all attempt to log into the same website at the same time so that we can lie to the government about what religion we belong to.

So whilst I was waiting for the website to recover from the inevitable denial of service by civic duty crash , I set up the Chacabuco scenario I played last night again.

Having done a census of my own, I realised that I'd miscalculated the elements in each army. The revised (and smaller) forces for this game were:

I went for the same almost-historical, setup. 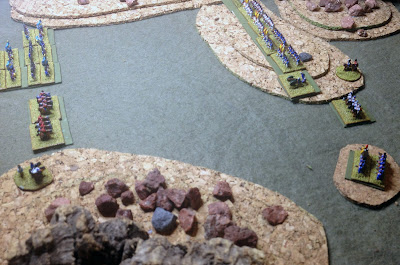 This time, though, the Patriot cavalry didn't fanny about, and went straight for their Royalist opposite numbers. This was a risky strategy, because whilst the Royalist cavalry is outnumbered and outclassed by that of the Patriots, it is supported by artillery and infantry. My gamble was that the Patriot flank march would turn up sooner rather than later. 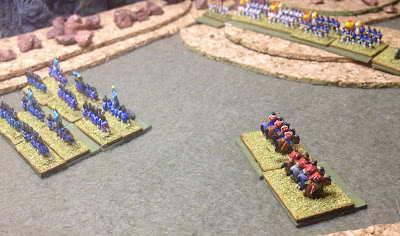 The Patriot infantry plodded forward into the Royalist musketry. Once again their attempts to spread out into an opposing firing line were hampered by a lack of PIPs. 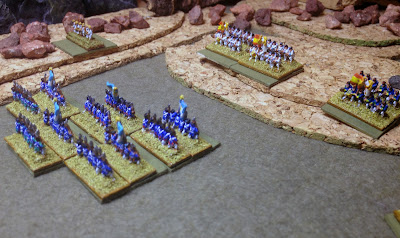 The Patriot attack finally went in. 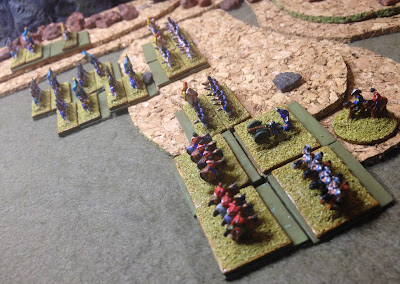 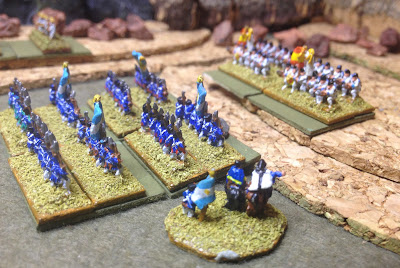 An element of cavalry was routed by the Royalist guns. And the gunners, of course. Because even in 1817 guns didn't kill people. People with guns killed people. Especially people with big guns. 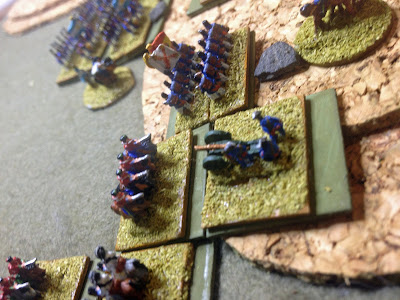 The Royalists had lost an infantry element to shooting, so closed up their line. 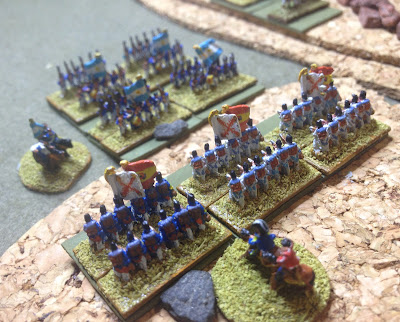 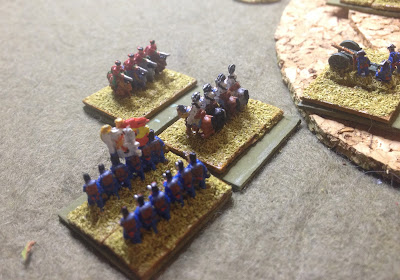 San Martin joined them in person, and drove the Royalists back. 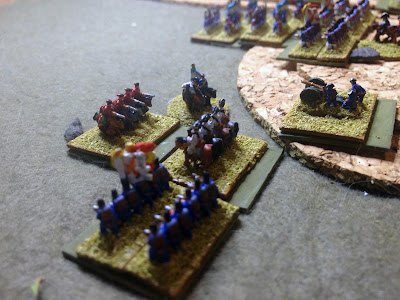 The Patriot columns went in again. 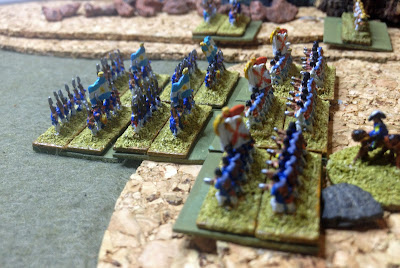 And one was destroyed. 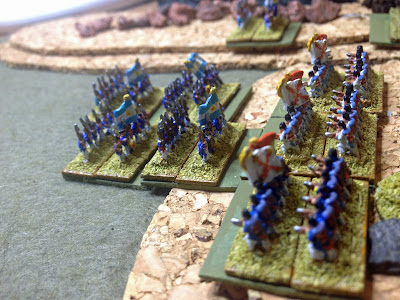 The Patriots were only two elements away from breaking. At this point, Soler's flanking force turned up. 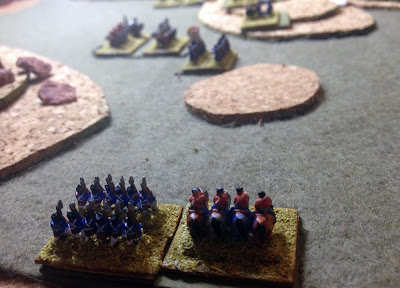 San Martin rushed over and led the cavalry in a charge on the Royalist infantry on that flank. 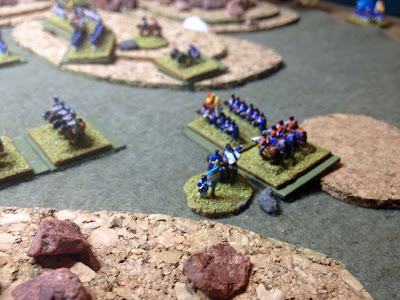 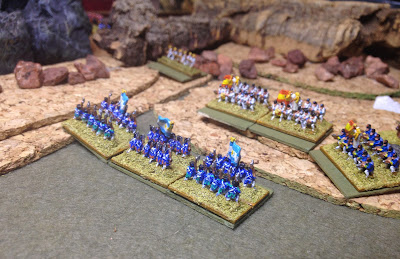 Again the Patriots fell back, on all parts of the battlefield. 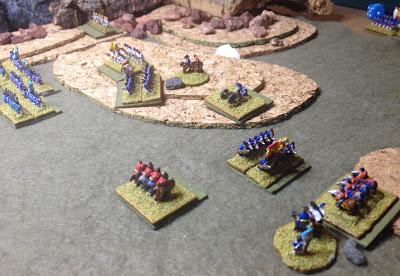 With victory within their grasp, the Royalists swept down off the hill and outflanked the Patriot line. 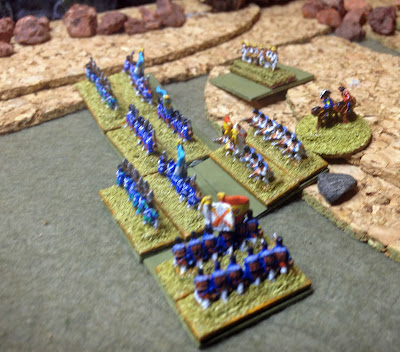 The Patriots were left only one element away from defeat. 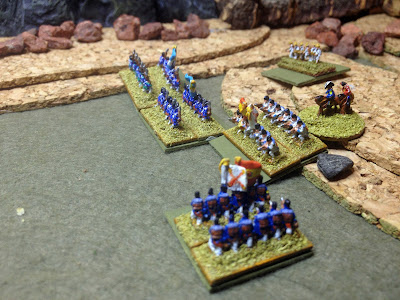 At this point they rolled a '1' for PIPs and got outflanked again. 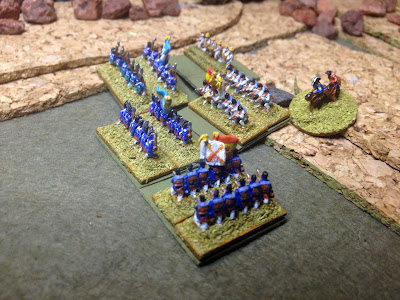 On the other flank, San Martin's cavalry had finally disposed of the Royalist horse, and were pressing the infantry there. The Royalist army was also now only one element away from defeat. 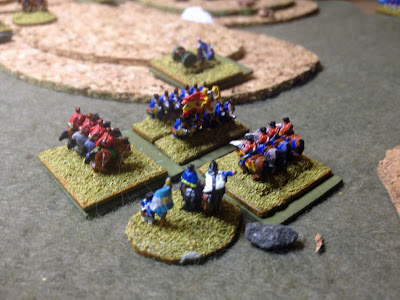 The Patriot infantry fought like demons, held off the attacks and managed to swing onto the Royalist flank. 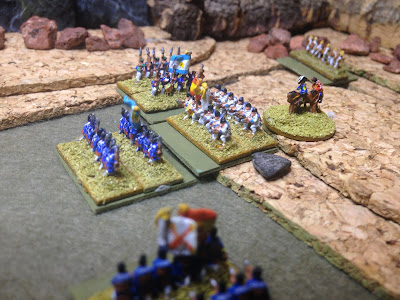 They were repulsed as well, by troops led by General Maroto himself. 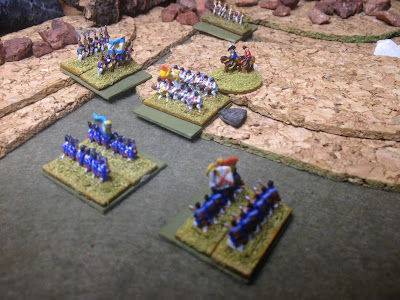 But Patriot cavalry clinched the victory on the other flank, San Martin leading the final charge himself. 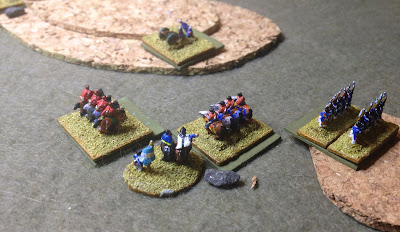 The battlefield at the end. 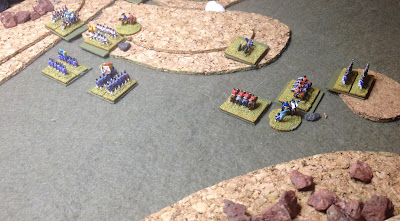 This was a much closer game than last night's and could have gone either way at any point. The adjusted forces are probably a more accurate representation of the relative strengths of the two armies as well.

As for the census, the site was still down when I went back after the game. I'll do it tomorrow.