Over the weekend I had another go at the Laguna Salada scenario I played last week. I changed some of the figures I'd used for it the last time,in order to better reflect the forces with my rather generic figures. The only change I made to the actual scenario was to downgrade one element of the Patriot force from regular to peasant.

Once again, this was the setup, with the Patriots on the left and the Royalists on the right. In the forest you can see the blinds on which the ambushing Royalist skirmishers can appear. 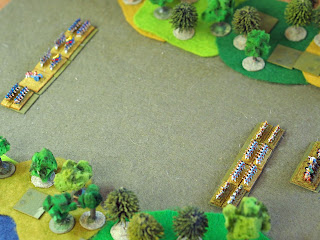 The main Patriot force held back, whilst their light troops moved cautiously into the woods. 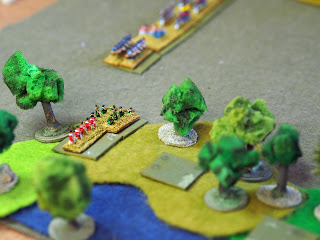 They found a Royalist ambush. 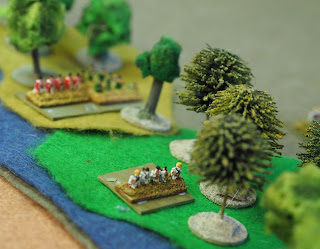 The Royalist forces pushed forward, under fire from the Patriot artillery. Meanwhile the Patriot skirmishers charged the revealed ambush, routing the enemy. 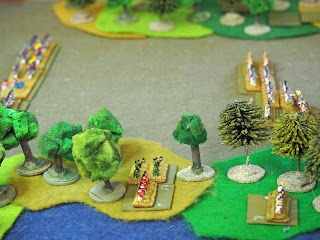 The Royalist commander threw some of his cavalry forward, but a single cannon-shot caused them to scatter and flee. 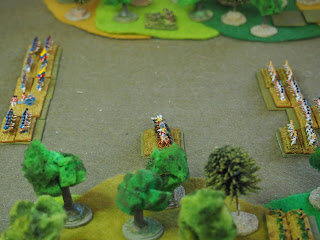 The Patriots poured musketry onto the flanks of the advancing Royalist line, and more troops ran. 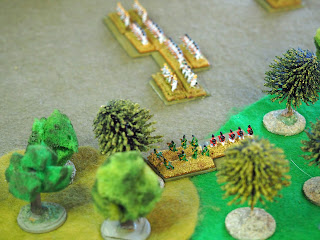 The Patriot left flank came under sudden attack from bow-armed indians in the woods. The terrified militia on that flank fled for cover. 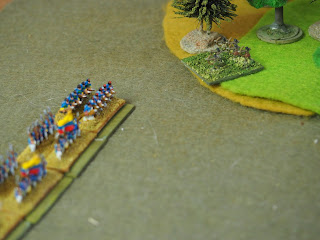 The men of the Irish Legion were made of sterner stuff, and swinging their line toward the trees, drove off the indians with a single volley. 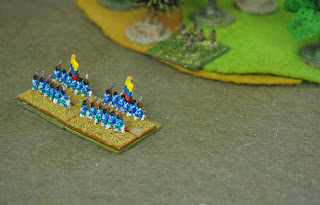 The rest of the Royalist cavalry pushed forward, threatening the Irish Legion ... 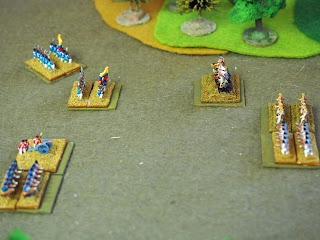 ... but the swinging across to hit the artillery. 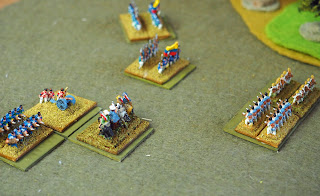 And that was the end. The guns held their fire to the last minute, and blew the horsemen away as they attempted to close. On the Royalist right more militia broke under musketry from the Irish Legion, and the whole army routed.

Having played this through three time it is obvious it needs some adjustments. It is still very hard for the Royalists to win. I think I need to give them more freedom in how the ambushes appear, as at present they can be forced into revealing themselves by the Patriots using the skirmishers. When I originally started adapting this scenario I considered something along the lines of lurkers in HOTT, and I may return to that idea, allowing them to appear anywhere in the woods at any time for a cost of 1 PIP per element if they are more than 200p from an enemy element, and 2 PIPs if they aren't. This can allow them to appear out of nowhere, even in an area previously traversed.

Secondly the Patriots can, to some extent, win by just sitting back and using their artillery, forcing the Royalists to attack them. I am considering some kind of ticking clock mechanism here, putting a time limit on how long the Patriots can just sit tight before attacking. After all, they were pretty much trapped in the town of Riohacha, whilst the Royalists seemed content to sit outside and annoy them. The Patriots had to drive them off. I am considering dropping their break-point by one if they haven't won in a certain time, perhaps when their PIPs reach a particular total. This should force them into a more aggressive stance.

Finally, John Fletcher's scenario does not have a straightforward 'break the other army' condition. The Patriots must break the Royalist army, yes, but the Royalists can win by breaking certain units in the Patriot army; specifically the elements of the Irish Legion. To this end I am considering making each regular infantry element be worth two elements for the purposes of breaking the Patriot army. With a break-point of only 3 this makes their army very fragile indeed. Combined with the facts that they must attack quickly, and that the enemy can ambush them without warning, this could make for a far closer game.
Posted by Kaptain Kobold at 13:30