The Battle of Chacabuco

The Battle of Chacabuco was fought on 12th February 1817 in Chile. Briefly, the Patriot general San Martin marched an army across the Andes from Argentina with the aim of liberating Chile from Spanish rule, allying with an Army under the Chilean patriot Bernardo O'Higgins. A force of Royalist troops, under General Maroto were rushed to meet them, and blocked their advance at Chacabuco Valley.

San Martin attacked the small Royalist force, splitting his fores such that part of his army, under O'Higgins, would hold the Royalists to their front, whilst the other part, under General Soler, would march by narrow mountain paths around the Royalist left and attack them there. The plan worked up to a point. Initially O'Higgins just exchanged fire with the Royalist line, but then for reasons still not clear, he attacked. This could have been due to a certain impetuosity on his part, or it has been suggested that he saw the Royalists about to advance from their positions and was concerned that he would be trapped in the narrow valley through which he was advancing. Whatever the reason, his attack spurred San Martin to take direct control of the battle, ordering his elite Horse Grenadiers up in support. At that moment, Soler arrived on the Royalist left, and the combined attack collapsed the Royalist army. Part of it rallied at a farm in the Royalist rear. but it was soon forced to surrender.

The bulk of the Royalist forces fled Chile and O'Higgins was installed as Supreme Director. Whilst Chile's complete liberation wouldn't occur for another year or so, this was the beginning of the end for Royalist rule.

The battle is a small one. The Royalists had about 1200 men on the field, whilst the Patriots ended up with about 1500 in action, some of Soler's flank marchers not being engaged at all.

I decided to refight it using my Liberated Hordes HOTT variant, with an element representing roughly 200 infantry or about 150 cavalry. I adapted the scenario and orders of battle from the Liberators sourcebook from Grenadier Publications. This gave the following forces:

I simplified the Patriot command, putting San Martin in actual charge from the word go. I reasoned that the point at which he used his bonus for being a Good general (which allows him, once per game, to roll twice for PIPs and pick the best result) would be the actua point he took direct command. I decided to allow the events of the scenario itself to decide how impetuous O'Higgins would be.

Soler's appearance would simply be diced for at the end of each Patriot bound from the second one onward. On a '6' his troops would appear on the next Patriot bound.

Here's the initial setup, with the Patriots in the foreground. I went for roughly historical deployments, with the Royalists lined up along a hill, skirmishers on their right and the cavalry in the valley to their left. One of their infantry regiments was deployed on a small rise on their extreme left. The Patriot infantry was on their left, with their cavalry on the right. I made the hills in the centre gentle ones, with no movement penalties. The hills with rocks on are bad going, whilst the cork pieces represent impassable mountains. 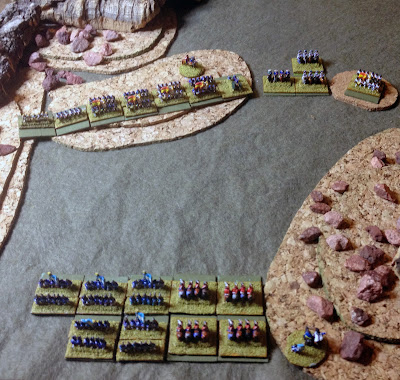 The Patriots pushed forward slowly, whilst the Royalists worked skirmishers onto their flank. The Patriot plan was to push their infantry forward and extend into a line, holding the cavalry in reserve until Soler arrived such that it could be pushed forward to support an attack on the Royalist right. 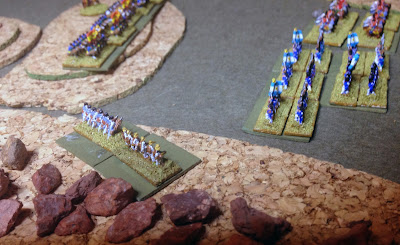 The skirmishers opened fire on the advancing Patriots. 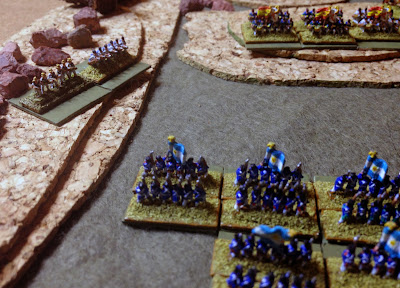 The Patriots detached some infantry onto the slopes in order to drive off the skirmishers. 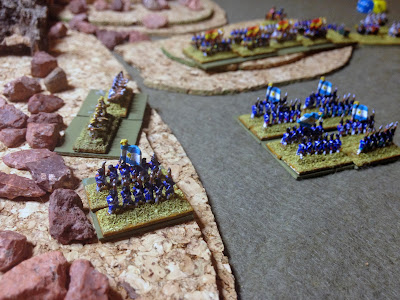 Meanwhile the main force attempted to expand into line, hampered by the limited space and, more importantly, poor PIP rolls. 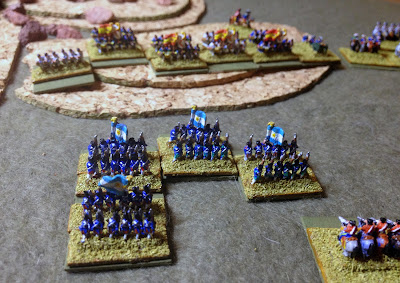 San Martin tried to keep the momentum going, but Royalist fire was hindering the Patriot troops' attempts to deploy properly. 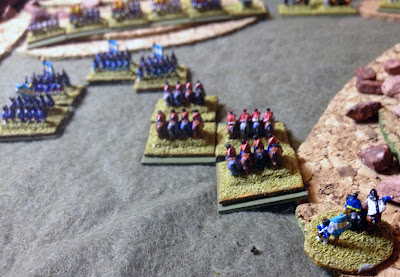 On the slopes the Patriots charged, but an accurate volley from the skirmishers routed them. 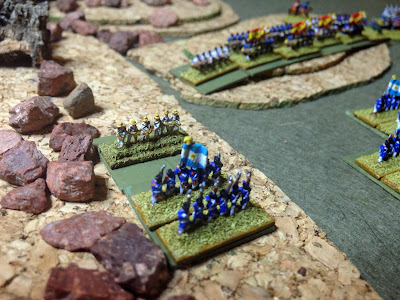 Meanwhile more Patriots were lost to increasingly heavy fire from the Royalist centre. 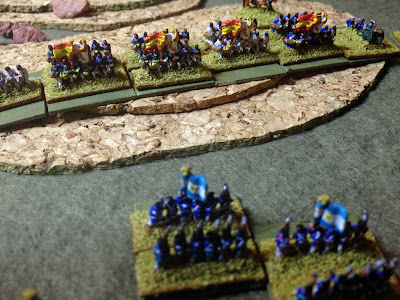 With the Patriots now disorganised, and casualties mounting, Maroto decided to advance the Royalist line and sweep them away with bayonet and lance before they could rally. Another Patriot element was lost. 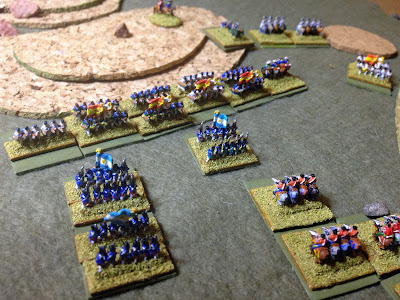 At this point San Martin took direct control, launching a combined arms counter-attack on the advancing Royalists, led by his elite Horse Grenadiers. 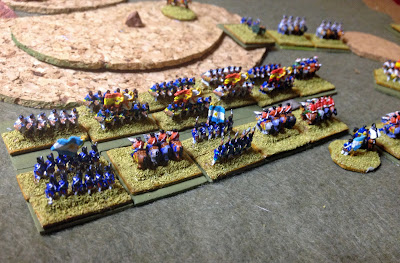 At that moment, as if on cue, Soler's flanking force arrived. 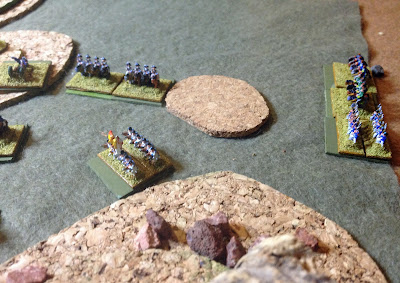 The Royalists had vacated the small rise on their left, but swiftly reoccupied it with their cavalry. 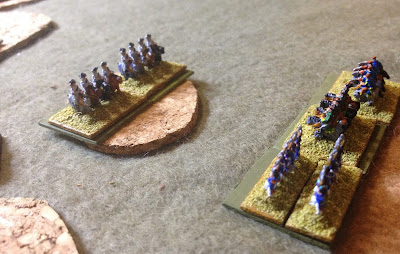 Meanwhile San Martin's first assault had been driven back, and the Royalists began to fire volleys again as the cavalry tried to reorganise. 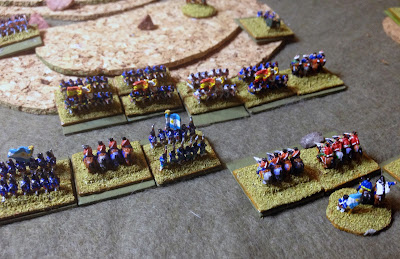 Soler's cavalry swept up onto the hill, but against the odds they were driven back. Unfortunately the Royalist cavalry pursued them, giving up their defensive advantage. 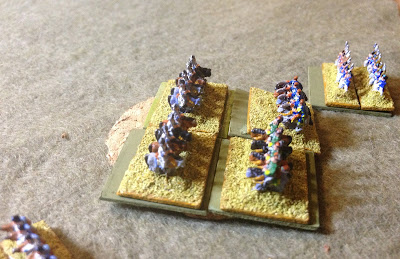 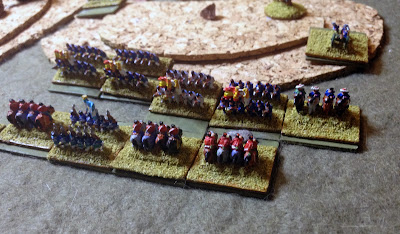 At this point the game was interrupted by a large beast - the newest member of our menagerie, Gypsy Danger. 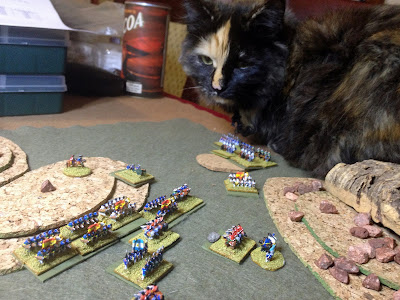 She inspired Soler's troops to greater efforts. One element of Royalist cavalry was forced back onto the hill, whilst the other was routed. 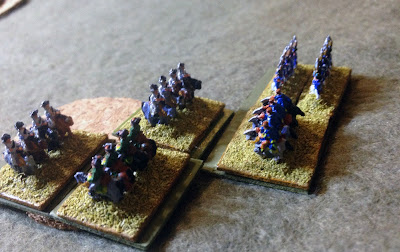 The Patriot army was now close to breaking, but with Soler's cavalry now in a threatening position San Martin merely had to hold his line together long enough for them to do their work. 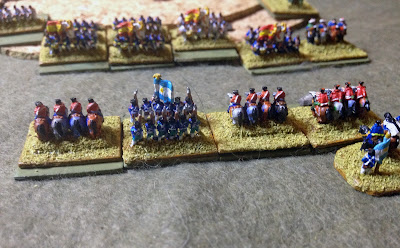 Royalist fire made this a tricky proposition, however. 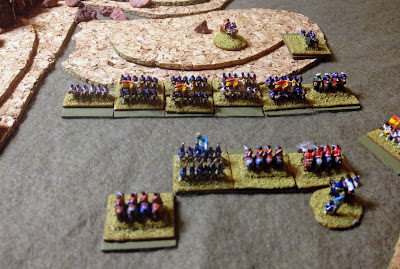 Soler's cavalry charged the Royalist left, hitting the artillery on the main hill, and the remaining militia horse on the end of the main Royalist line. 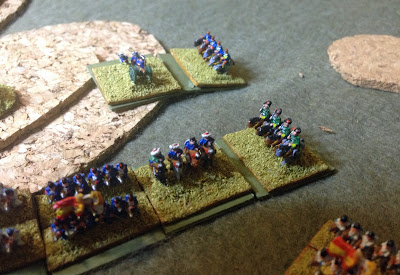 San Martin decided to support the attack by throwing the rest of the Horse Grenadiers into the attack, against the left end of the Royalist line and the skirmishers supporting the right. 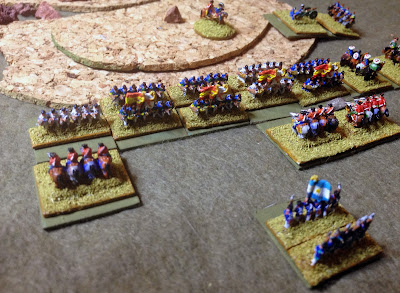 San Martin led one group of horse personally, and drove back his Royalist foes. On the Royalist right the skirmishers fell back as well. But the other cavalry attacks were all repulsed, and one cause the squadrons to rout. That was enough to break the Patriot army, which turned and fled. 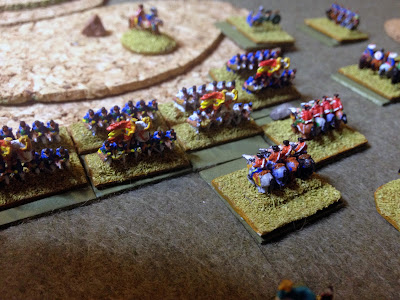 A disaster for Chile! 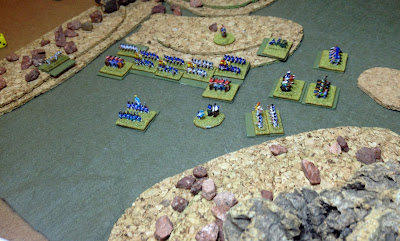 The Patriots lost six elements - four infantry and two cavalry. The Royalists only lost the two militia cavalry on their left. 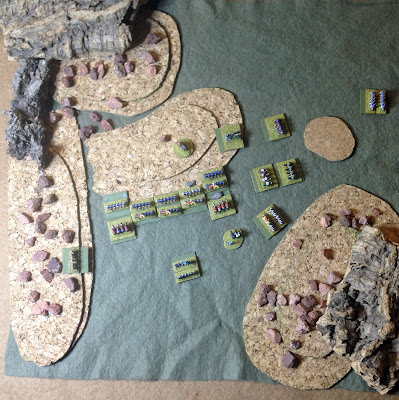 The Patriots suffered poor PIPs on their first couple of turns, and were then hampered by abysmal combat rolls, which saw them either draw with their Royalist opponents or lose badly. They never really got to exploit any of the openings they had. Be that as it may, they almost turned the game at the very end, with the flank charges looking set to destroy two or three Royalist elements in a single turn, and even threatened the general himself. It could have quickly swung their way, but it was not to be.

I shall be looking to refight this battle another day. I have played it before with other rules and it has always been a runaway Patriot victory, but even discounting the poor initiative and combat rolls, the Patriots had a tough job with this particular setup and rules. Their cavalry is obviously the key, being more numerous and of far better quality than than of the Royalists, and maybe a charge straight down the valley at the start is the answer, trusting to O'Higgins' infantry to hold the main Royalist force in place, and that Soler will turn up to prevent an envelopment. It's a risky strategy, though.
Posted by Kaptain Kobold at 23:00