A Quiz: 'Laguna Salada' is:

The answer, of course, c). The observant amongst you will have spotted that a) is a trick because nothing relating to seafood is tasty, it being, along with olives, the Food of Beelzebub. 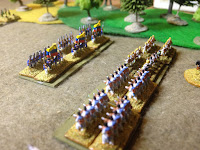 This battle is one of many featured in John Fletcher's fine Liberation! sourcebook 'Adventures of the British & Irish Legions in South America 1817-1824' and it features troops of both the Irish Legion and British Legion. I won't got into too much detail on the lead up to this action, since it would be great if you could buy John's book and read it for yourself. Suffice to say that elements of both legions were cut off from other Patriot armies in Gran Colombia in the port of Riohacha and were not happy about it. 'Mutinous' is the word used in the sourcebook. The local Royalist commander, Colonel Lima, had assembled a force of some 1,200 to 1,500 troops, and was hanging around outside of the town. As he approached the Legions were called to arms. Most refused, leavings a small force from the Irish Legion Lancers (who fought as infantry throughout the war) to march out and face them.

They won, driving off the Royalists.

A few days later the Royalist force came back. This time most of the Patriot troops ambled out to meet them. This is the battle covered by the scenario.

The map in the book covers quite a large area, but the battle was basically fought on open land between two areas of  dense forest. The forest to the south also contained the lake after which the battle is named. The Patriots numbered about 1,100 men, the Royalists 1,500. The quality of most of them was not that good.

I set up the battle to be played with Liberated Hordes, of course. I went for 200 infantry or 150 cavalry to an element. This gave the following forces:

Patriot
General Montilla (Good)
3 x Regular Infantry (Irish Legion Lancers and Cundinamarca regiment)
1 x Peasant Infantry (Riohacha Militia)
2 x Militia Skirmishers (British Legion Tiradores and Venezuelan Marines)
1 x Regular Artillery (Two mountain guns)
7 Elements. This gave a Breakpoint of 3.5, which would normally be rounded up, but I decided that since their enthusiasm was suspect I'd round it down to 3.

Troops rated as Peasant are treated as Militia, but get a -1 in all combat as well. They are really, really fragile.

Here's the setup, with the Patriots to the left and Royalists to the right. The Royalist Skirmishers were deployed in ambush. I gave the Royalist player six blank bases which had to be deployed entirely in the woods. Bases could not move once they'd been placed. On their turn the Royalist player could spend a PIP to activate a base, placing one of the Skirmisher elements on it with any facing. The element could then move normally. If, however, at the end of the Royalist movement there was a Patriot element within 200p of any base which had not been 'revealed' it would be removed. If all bases were removed before one or both Skirmishers had deployed then they were assumed to just be hiding in the woods and taking no part in the battle, although they did not count as lost. 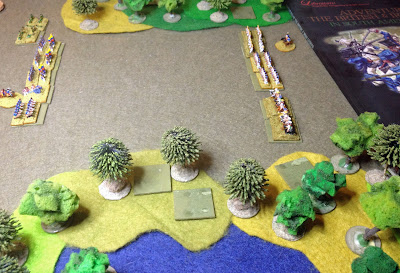 The Royalists. Their militia infantry was the best they had, and was in the centre. To its right were the peasant infantry and to the left the cavalry. 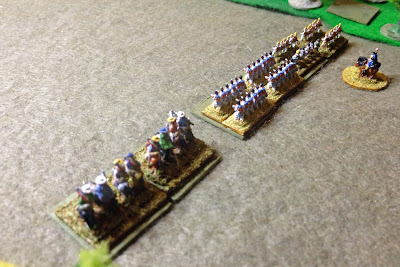 The Patriots. The skirmishers were on the left, ready to dive into the woods and clear them of any ambushes. The decent infantry made up the centre, whilst the artillery and the less reliable militia covered the right flank. 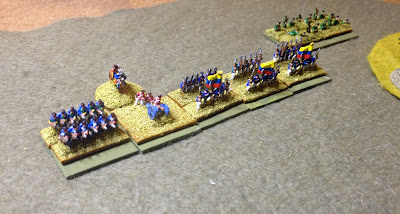 The skirmishers enter the woods. I used my green uniformed 'riflemen' for these elements. I'm not sure what uniforms the actual troops would have been in. At this stage of the war it was likely to be just about anything they could get hold of. 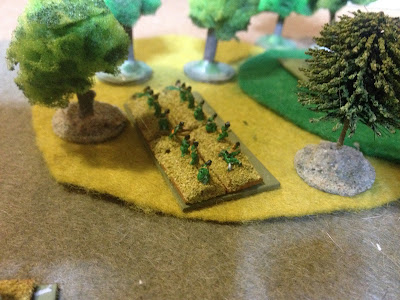 Of course with the Patriot skirmishers going into the woods on their left, the Royalist ambush appeared on their right. The Riohacha Militia came under fire. 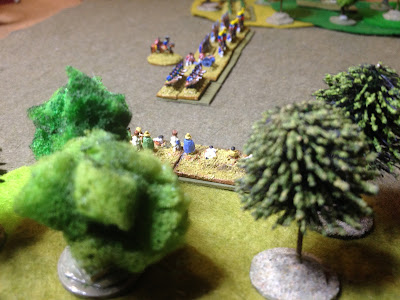 General Montilla rose to the occasion, using his Good General bonus to roll twice for PIPs and keep the best result. Because of the small number of elements involved I decided to use the rules I'd used for my six-element One Hour Wargames games, where a force got 1D3 PIPs. Strictly what I was doing was rolling a D6 and halving it, because in Liberated Hordes certain abilities are activated by a roll of '1' or '6', and that needed to be preserved. In this game that didn't matter, but it's a useful habit to get into. In addition the generals are not with an element and all units are considered in command.

Anyway, General Montilla ordered the main infantry line forward, whilst pulling back the Riohacha Militia from the teeth of the ambush. 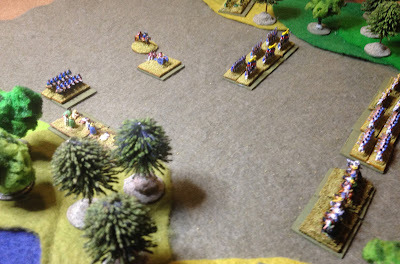 The ambushers broke cover and rushed the Riohacha Militia, who broke. 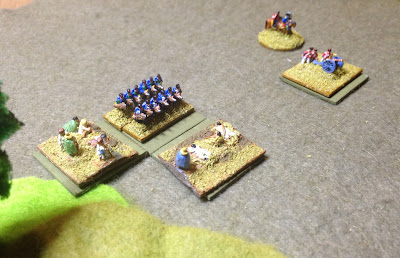 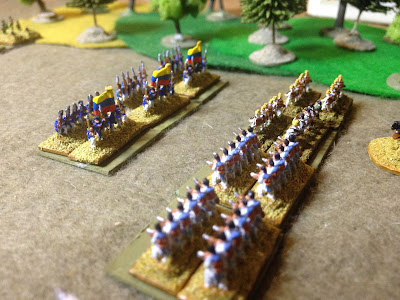 With his artillery now threatened by the guerrillas, General Montilla ordered his own skirmishers up in support. Reluctantly they complied. 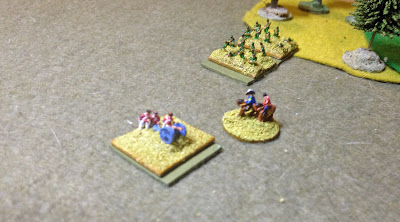 Musketry from the Irish Legion caused the Royalist line to waver. The other One Hour Wargame idea I reused was not to have generals attached to units. Instead each side got two rally tokens. If a unit lost a combat and would be destroyed, but could be saved by the addition of one to its combat total, then one of the rally tokens had to be spent. With the small number of units in play, this helped reduce sudden collapses. In fact both Royalist tokens were spent in one bound; once to save their skirmishers and once to save an element of peasant infantry. The Royalist army was now on borrowed time. 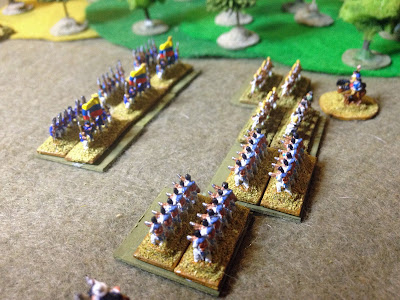 Colonel Lima ordered his cavalry to charge the Irish Legion's flank in support of his infantry, but they were held off. 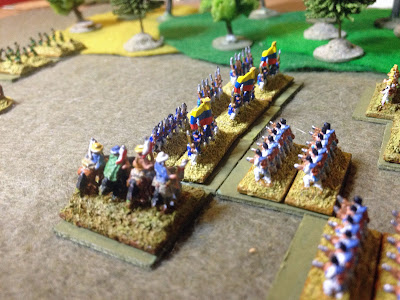 With the Patriot skirmishers reluctant to advance (no PIPs) the Royalist guerrillas boldly attacked the Patriot artillery, but were driven off by the determined gunners in a fierce hand-to-hand combat. 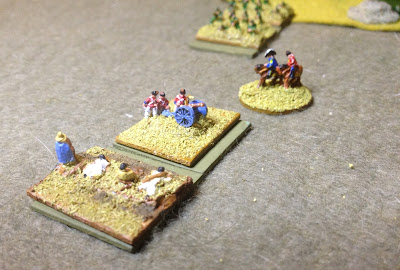 The Royalist army was now wavering, so General Montilla ordered a bayonet charge. 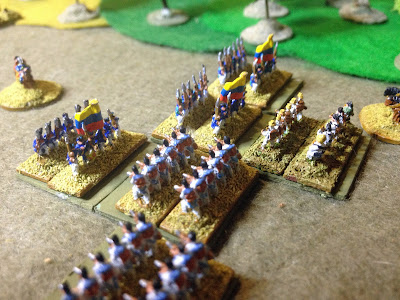 Colonel Lima desperately brought the full force of his cavalry to bear on the Patriot line ... 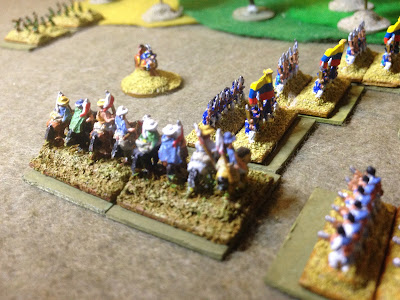 ... with some success. But it was too late. The rest of the Royalist army broke and ran, and the cavalry was now all that stood between them and utter destruction. 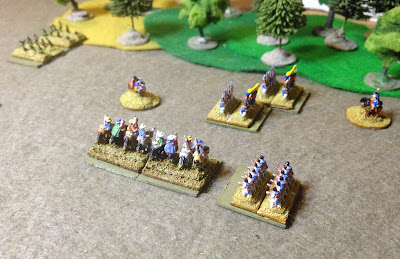 Being such a small scenario I had time to fight it again. So I did.

This time the Royalists set up the other way around. 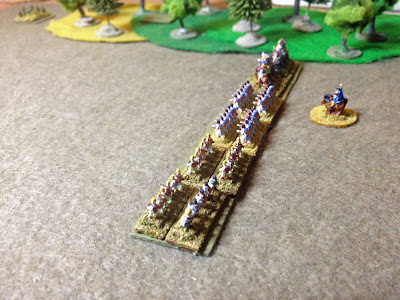 The Patriots sent their skirmishers wide. 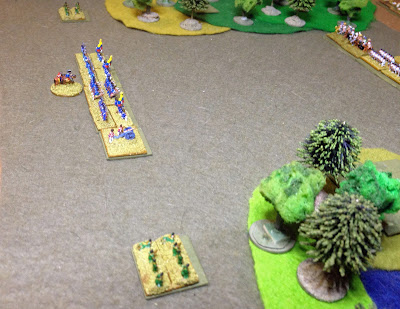 Most of the Royalist ambush bases were to the south. 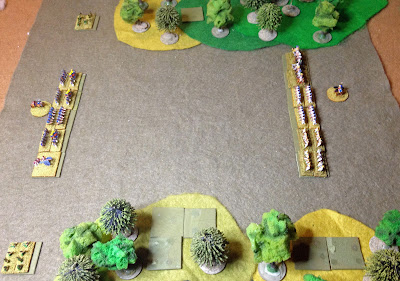 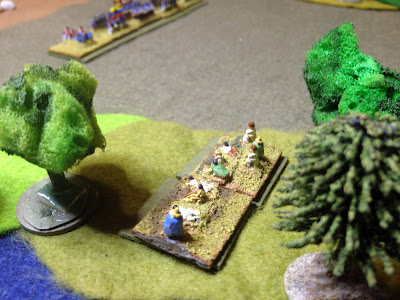 ... and opened fire on what we shall say were the Venezuelan Marines. 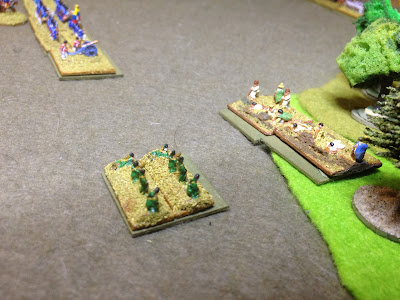 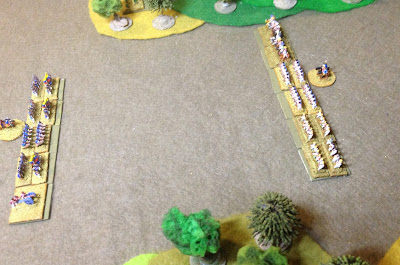 The British Legion skirmishers took his right flank under fire, scattering some of the horse there. 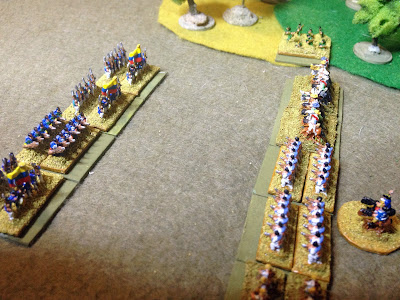 No messing about: in with the bayonet! 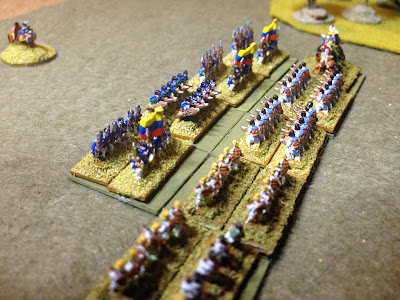 The guerrillas charged the Venezuelan Marines who put up an epic fight and drove them off. 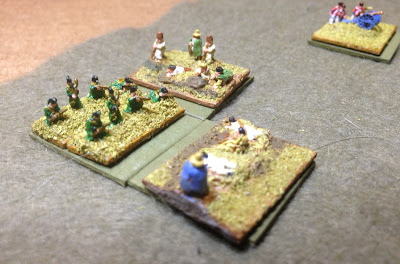 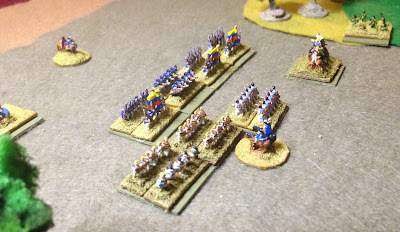 With a loud Huzzah! the Irish Legion counter-attacked. 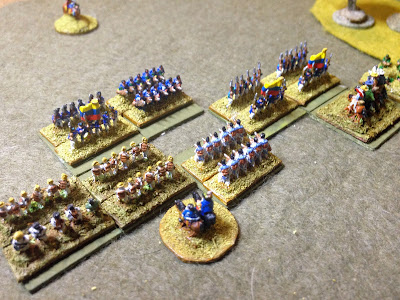 The guerrillas tried their luck against the Patriot artillery, which held them off again. 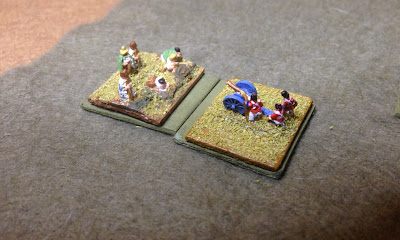 Close to collapse the Royalists tried to break the Riohacha Militia in the centre of the Patriot line, but they held firm. 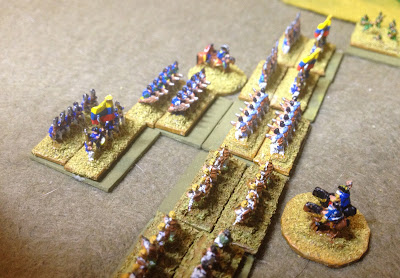 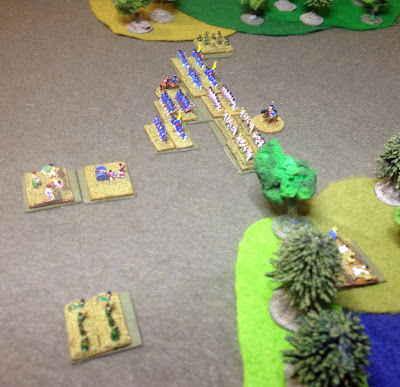 This scenario is not balanced, but it didn't seem to matter because it gave two exciting games. The Royalists are very much outclassed in terms of quality, and the only real edge they have is their ambushes. If I was doing it again I would reclassify one of the Patriot regular infantry as Peasant instead. The numbers were a bit borderline, and I rounded in favour of the Regulars, but a 50/50 Regular/Peasant mix would probably better reflect the mutinous nature of the Patriot force and make them riskier to use. This is another scenario I shall be looking to play again.
Posted by Kaptain Kobold at 22:11