I have returned from the final day of MOAB, having played in the HOTT tournament there. I bring pictures and accompanying wordage!

There were eight of us taking part, using 15mm armies built to 36AP. To compensate for the larger armies we used boards that were the correct width but which, at 80cm wide, were 25% wider than normal. We'd actually used normal 2' x 2' boards for our practice games, but other groups had found the battlefield width too restrictive. These boards certainly gave plenty of room for maneuver, as well as plenty of chances to move troops out of command.

I took my Sumerian mythological Spawn of Tiamat army, expanded to 36AP with a couple of ringers from Asag's stone allies (some rockman hordes), a new knight element, a couple more beasts and a behemoth.

The final army was: Magician General (Tiamat), Hero (Qingu, her consort), Dragon, Behemoth, 3 x Knights, 4 x Beasts, 6 x Hordes. The Dragon was a waste of time; n all of my practice games and all four tournament games I didn't deploy it once. Generally this army is too starved of PIPs to be able to squander a '6' on the Dragon.

My first game saw me up against Greg, who I'd played last year. He was using a beautiful Arthurian army - my choice for best army of the event - and defended. 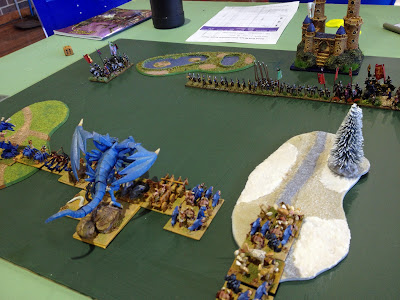 He placed his paladin and some knights far out on one flank. I made them my primary target. 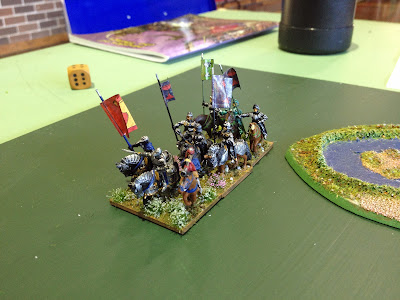 Arthur, Lancelot and Merlin were on the other flank. This made his command and control tricky. 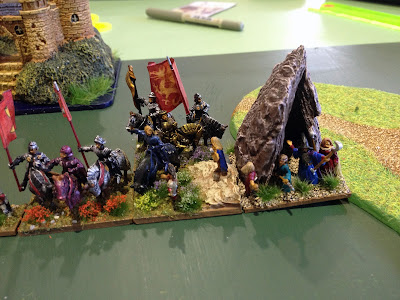 The lines approached, with my behemoth tasked with engaging and destroying Sir Galahad. 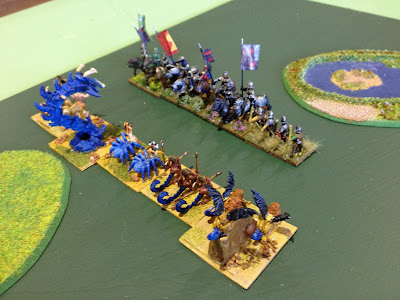 The armies engaged all along the line. Slowly I ground the Knights of Camelot down. 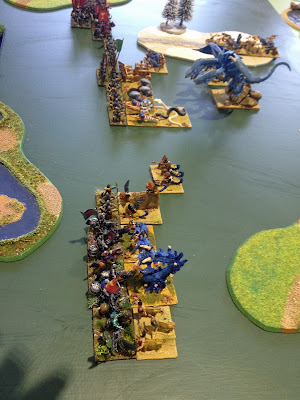 In the centre my beasts - a varied crew - mauled Arthur's archers. At the other end of the combat, however, Qingu, my hero, found himself outflanked and surrounded by men at arms. Against the odds he held them off for several bounds, whilst the rest of Tiamat's army racked up the casualties. The battle finished when Lancelot strayed too close to Tiamat herself, and was magically seduced. That Lancelot is such a pushover. His loss was enough to break the army, and give me a win. 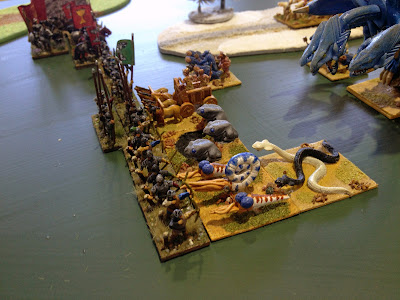 My second game saw me facing Geoff, who was also using a medieval army, although not one with a specific theme. I'd beaten this army on Thursday - twice - so was feeling confident. 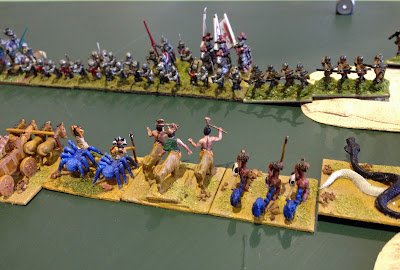 I shouldn't have done. Geoff wiped me out pretty efficiently, killing both the behemoth and Qingu. Although I had a plan which could have seen me rack up a load of kills in the last bound or so I didn't get the PIPs to implement it, and Geoff polished off my army not long afterwards. 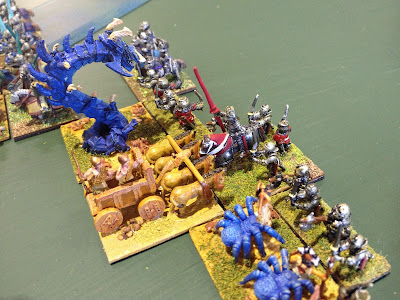 At the halfway mark I was sitting halfway down the table. Geoff and Caesar - the other Wollongong players - were riding high, with two wins each.

After lunch I faced a very nice Greek mythological army, commanded by Mark, who is experienced in DBA but new to HOTT. 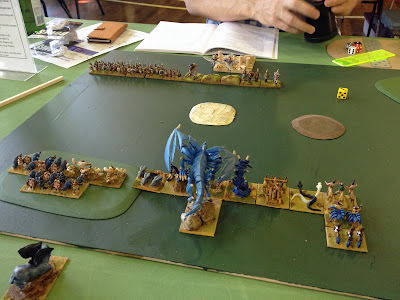 Look at those lovely hoplites! 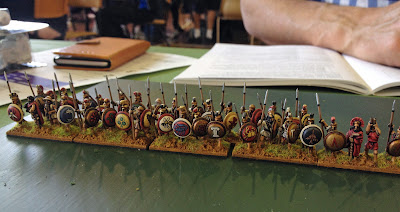 He pushed his cyclops behemoth forward to menace my beasts whilst they were still in the open. The cyclops was supported by his general, who looks like a spear element but was in fact a hero. I saw an opportunity. The behemoth had an open flank. I swung Tiamat through her own troops onto the behemoth's flank, then broke contact with the beast fighting it to the front. This forced it to turn to face and, when it lost the combat, its initial recoil took it over the hero general, squashng him. The first casualty of the game was the winner. 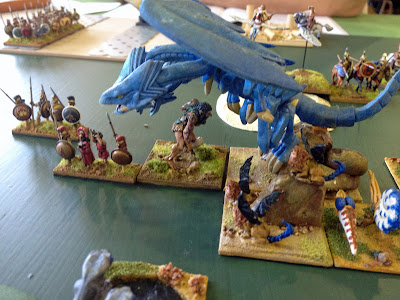 My final game was against the front-runner, Caesar. If I beat him, it would leave us equal on points, but I would gain the tie-break advantage, and win on that basis. There was everything to play for.

Unfortunately Caesar's army wasn't one I was thrilled to face, consisting of a core of four - yes, four - behemoths. 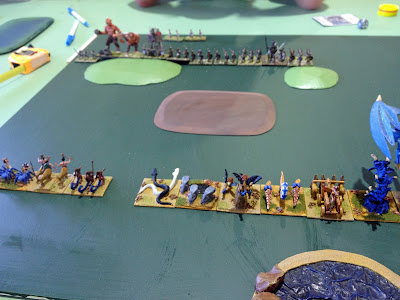 He massed them on one flank, opposite my rather vulnerable knights. 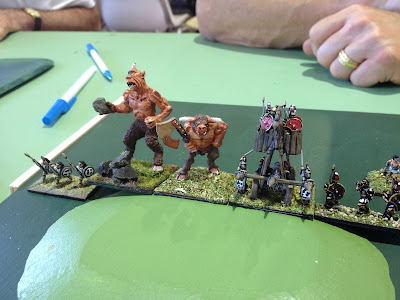 I moved Quigu over from the centre to support them. For a couple of bounds I was surprised to survive the combats, although one of my knights seemed to be incapable of riding down some supporting warband either. 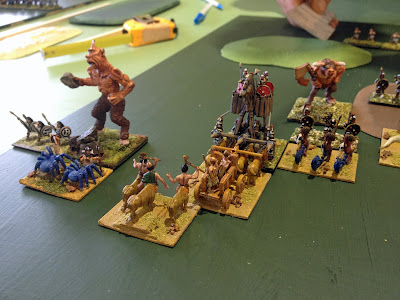 In the centre Caesar's warband faced my esoteric collection of beasts. Who would have won? We'll never know ... 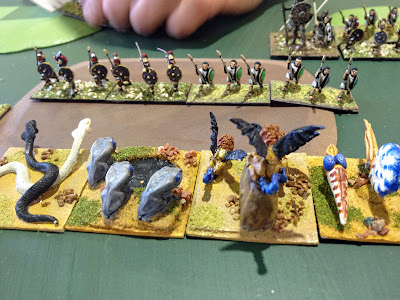 ... because the battle was won and lost back with the behemoths. Caesar's general was riding in his beautiful wooden horse. Qingu faced him directly and, in one lucky round, got an overlap on each flank. Caesar rolled a '1' in the combat. If I could roll a '5' or '6' in response then I would destroy him, and win the game. 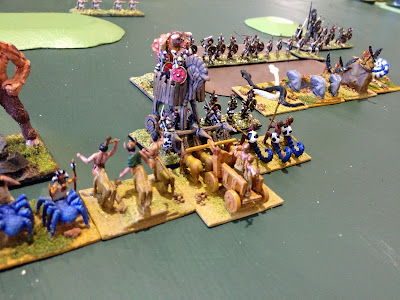 Sometimes, when you need a good roll, you get it. A '6' saw the wooden horse destroyed, the Greek general killed and the rest of the army fleeing the battlefield in panic. It was the first casualty of the battle, again.

This gave me three wins, putting me equal with Caesar and Geoff. But I had the best of the tie-break, so took first place, with Caesar in second and Geoff in third. A clean sweep of the prizes by the Wollongong contingent.

The event is part of the international 'The Good, The Bad and The Ugly' tournament as well. This is assessed on the first three rounds, so Caesar was our local winner there.

I can't deny that it's great to win MOAB for a second year in a row, but I feel a bit bad for Caesar losing on such an unlucky roll so early in the game. There's no doubt that in the normal run of things he would have defeated my army with little difficulty; I had no real advantage anywhere, and was very much on the back-foot. But that's how HOTT pans out sometimes.

Here's a few pictures of some of the other armies.

Another shot of Camelot. 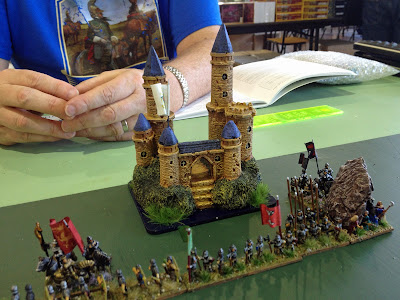 Geoff and Greg finished their day with an almost historical looking medieval clash. Apparently victory was achieved when Geoff's paladin cut down Merlin (or, at least, forced him to flee into his cave for safety). 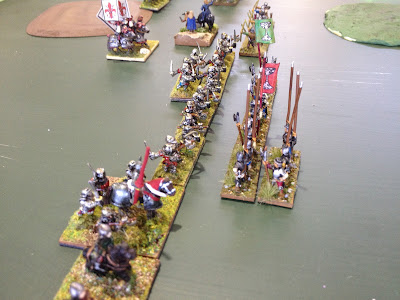 Here Victor's Carthaginians face a lovely undead army. I would have enjoyed facing both of these, just because they looked so nice. But you can't play against everyone, sadly. 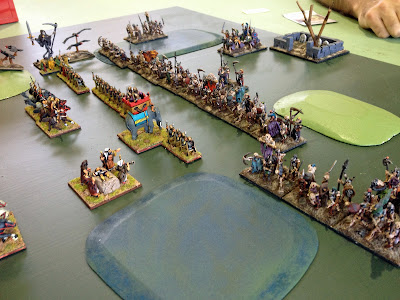 Thanks to Victor and the other Southern Battlegamers for organising another great HOTT tournament, and another great MOAB generally.
Posted by Kaptain Kobold at 21:32