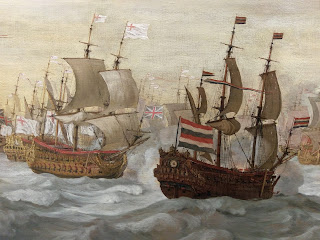 I have been looking through some old files on my Google Drive, and came across these house rules for Ganesha's 'Galleys & Galleons'. Whilst I have alluded to them in past posts, I don't think I have ever got as far as posting them anywhere, so I thought I'd share them on the off-chance someone might find them of use.

They are in three main sections. The first is a change to the Weather Change rules. In G&G, a change in the wind is based on failed activation rolls which means that, to some extent, a player can influence it by their choice of dice. I felt it was easier to have it as a separate roll, even if it adds an additional roll into the turn. Elements of it are based on the weather change rules in the classic 'Hearts of Oak' game. The second section covers Criticals, basing them on a single D6 roll, and clarifying (for my purposes at least) how they are applied to various different vessel types. They also add in the possibility of a crew abandoning or surrendering a vessel if it becomes immobilised. Finally there are a few random changes to Traits, which are purely personal or which I felt helped clarify things.

At the beginning of each player’s turn they throw a dice. If there are more than two players in a game only the first two players to activate that turn throw a wind change dice. On a score of 6 the wind may change direction.

Throw a dice for how much:

Roll another dice for wind direction:

“Veer +1”, “Back -1” and “Steady” markers can be used as reminders by placing them on the wind gauge and removing them after they have affected the next wind direction dice throw.

Excess damage scores one critical regardless of how many hits should be applied.

Roll a red dice for the effect, and a white dice in case of secondary rolls.

Captain killed – The first time this happens the vessel operates at +1Q for the rest of the game. If the vessel had Flagship or Dread Pirate then these abilities are lost. Any subsequent rolls are treated a 1 Hit, but if this is excess damage then the crew abandon ship.

Hull – The vessel takes a point of damage. If this is excess damage then the vessel sinks.

Rigging – Sail: The first occurrence of this critical causes the vessel to reduce all movement in all directions by one step – Long becomes Medium, Medium becomes Short and Short becomes 0. The second occurrence reduces all movement by two steps. Any after the second mean the vessel cannot move at all, and the crew will abandon ship if it is excess damage. A vessel which has taken two or more unrepaired rigging hits may no longer use Razee or Sweeps. Razee may be used in a direction which is not In Irons but which has been reduced to zero.

Rigging - Galley: The first occurrence of this critical causes the vessel to reduce all movement from Medium to Short. The second occurrence means that the vessel cannot move. Third and subsequent hits have no effect unless they are excess damage in which case the crew abandon ship.

Rigging - Steam Engine: The first occurrence of this hit causes the vessel’s speed to remain fixed at the current setting. The second means that the vessel may no longer move. Third and subsequent hits have no effect unless they are excess damage in which case the crew abandon ship.

Rigging - Unorthodox: The first occurrence means that a -2 is applied to all movement die rolls. A second means that a -4 modifier is applied. Third and subsequent hits mean that the vessel cannot move, and the crew will abandon ship if it is excess damage.

Fire – If the vessel does not immediately explode, then it catches fire, or receives another fire if it already has at least one. At the start of the player’s turn, before any ships activate, roll a dice for each fire on the vessel. If any of them score a 6, the vessel explodes. If the vessel does not explode, then roll for a critical hit. Only one critical is rolled for, regardless of how many fires are on the ship. The vessel rolls activations as normal, but all actions for that turn must be expended fighting one fire. Extinguish one fire on a 1-2 if the ship rolled one action, 1-4 if it rolled two actions and automatically if it rolled three actions. When a ship fights a fire, it may also automatically cut grapples to one opposing ship if it rolls 2 actions or more. This is a free action, and does not reduce the ability to fight the fire.

On a roll of ‘2’ the opposing player can force the vessel to do one of the following, so long as it does not cost more than one action:

Fireship - Once a fireship is on fire it rolls no activations, but takes damage from the fire on board normally. If it contacts another ship, it automatically grapples it.

Razee - A ship with this ability loses it if it has taken at least two rigging criticals.

Sweeps - A ship with this ability loses it if it has taken at least two rigging criticals.

Ornithopter - Allow use of Reduce Sails move to move Medium instead of Long.

Marksmen - Ignore the rule as written. Instead, in the first round of boarding after a grapple, a vessel with Marksmen rolls 2 dice for combat and selects the highest.

Lucky - When rolling two dice for which critical applies, if both dice score the same, then the critical is ignored.
Posted by Kaptain Kobold at 15:56