Night Of The Greek Generals 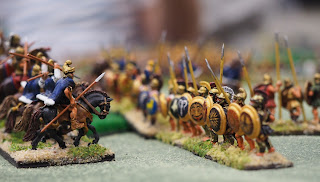 "The Athenian and Spartan armies (with their allies) are vying for possession of the auspicious Temple of Apollo, situated somewhere on the slopes of Mount Parnassus and home to the Oracle of Delphi. By holding the Oracle as a distinguished “guest” they hope to influence her prophecy in such a way that neutral city states will side with them in the broader Peloponnesian Wars. Needless to say, he who holds the Oracle can unite the rest of Greece behind him.

Unfortunately for the commanders, their allies are marching from every corner of the mainland and are unable to link up with each other before arriving at the foot of Parnassus. With the coming of dawn it is clear that the belligerents converging on the temple are hopelessly jumbled. This game aims to engage forces quickly and challenge everyone in a multiplayer big battle with an objective, catering for 4-8 players."

This is a diagram of the table setup. We had eight player, each running a single 12 element DBA Greek or allied army, and split into two teams of four. Each four was split into pairs and each pair took a corner of a 4'x4' table, with the allied pairs being opposite each other A1-A4 were one faction, whilst B1-B4 were the other. The temple was in the centre, marked by an area of felt and a building, neither of which had any effect on movement or combat.

Victory went to the side that had undisputed control of the temple for two full bounds. 'Undisputed' meant that not even a corner of an enemy element could be on the area of the temple during that time. 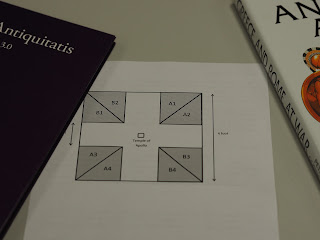 The game made for a crowded table. You'll note that although the map doesn't show it there was plenty of terrain. This was mostly gentle hills, but there were a few rocky hills and some patches of rough going as well. 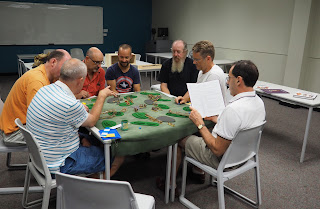 Here is the temple in the centre of the table. 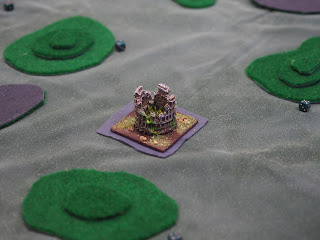 The armies were a mix of forces from the DBA rules; Athenians and Spartans, of course, but also Thebans and even a contingent of Persians.

It was, as you can imagine, a chaotic game. Trying to keep track of friend and foe was bad enough, without having to also come up with a plan for taking and holding the temple. In the end I just played my corner, and took lots of pictures. I can't offer very much in the way of a coherent narrative. 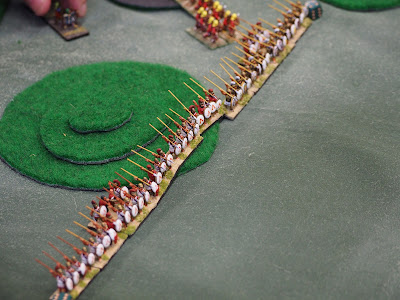 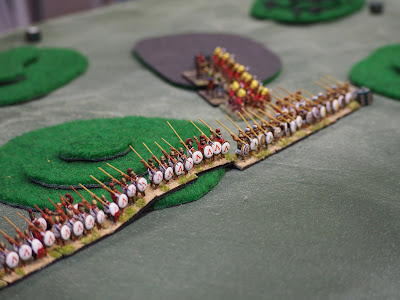 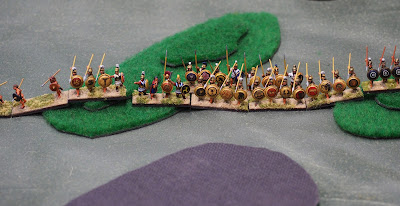 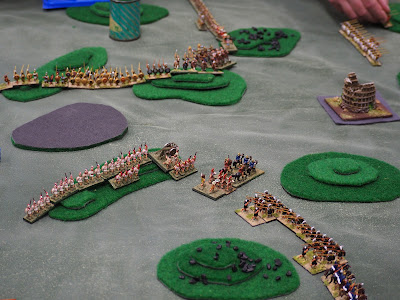 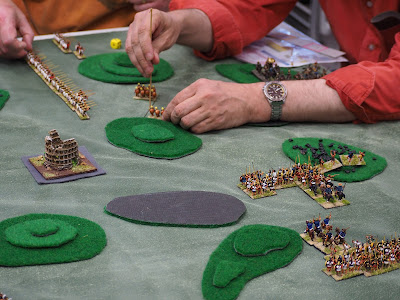 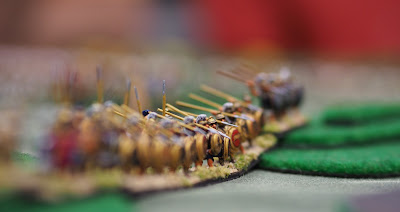 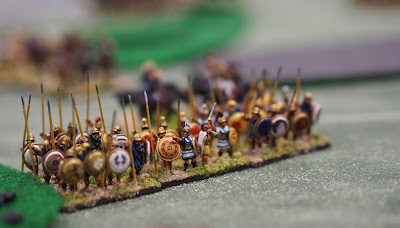 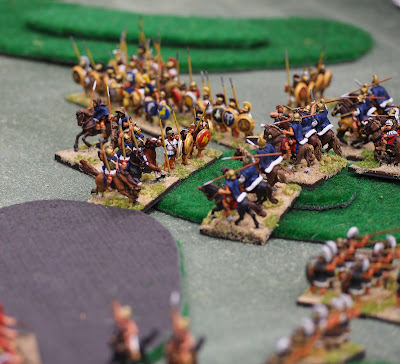 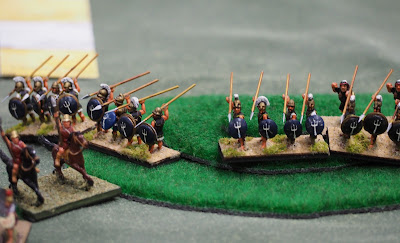 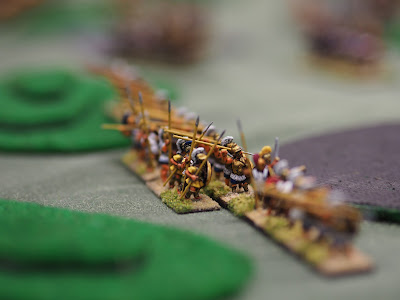 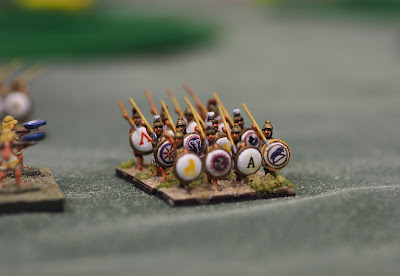 Later on the elements around the temple thinned out as people realised that trying to break enemy armies was the way to stop reinforcements being rushed to the fighting. 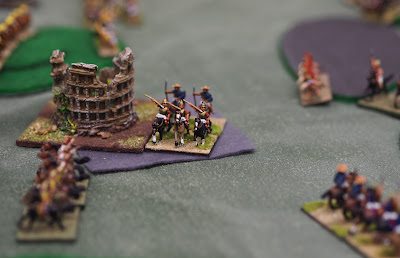 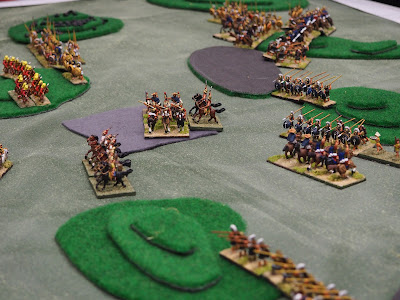 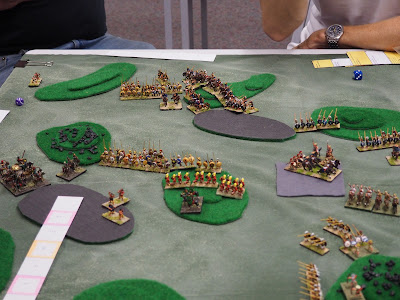 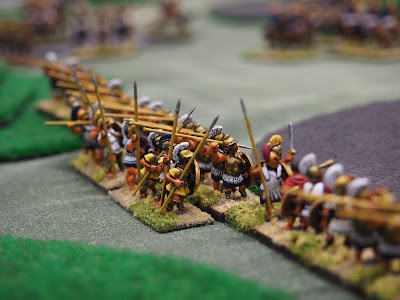 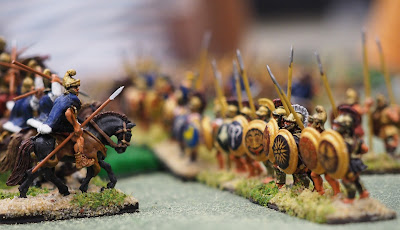 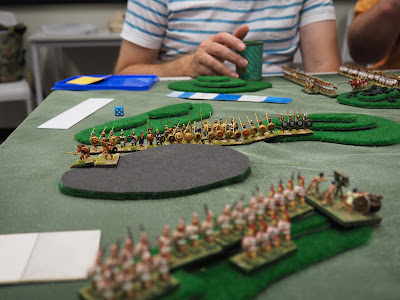 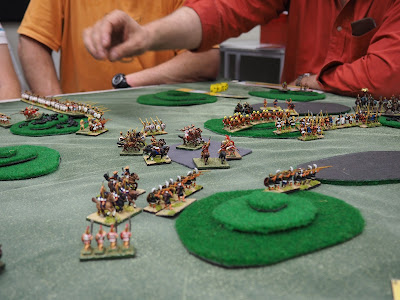 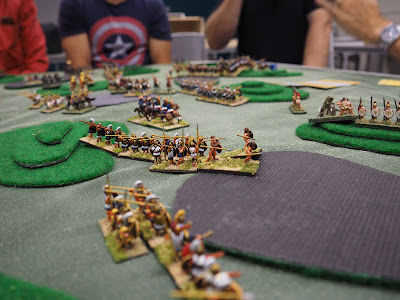 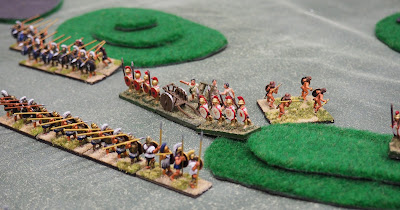 Finally the Spartans managed to keep an element in undisputed control of the temple for two bounds, keeping just a toe-hold on the area whilst they moved out to pin the light cavalry that could have contested them. 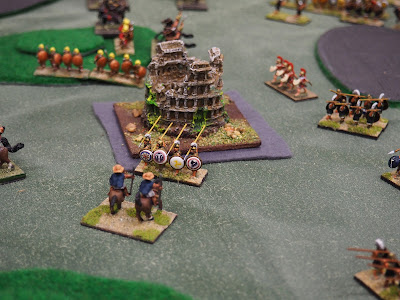 Casualties were fairly light, aside from Caesar's army, which broke after having its recoils blocked by Geoff's cunning use of cavalry to support his allies.

Thanks to Caesar for designing an entertaining evening's play suitable for our last meeting of the year, and to Peter, and others, who provided the gorgeous figures.
Posted by Kaptain Kobold at 07:17