Last week's HOTT 52 game featured two armies of blades. This week I tried out two warband armies. Or that was the plan - one army had eight warband (the Squidmen) but the other one I chose actually only has four (Rama). Both armies also have two elements of knights, then the Squidmen round out their army with a behemoth whilst Rama's forces include two beasts and two heroes. You'll realise that, whilst it's not necessarily all about the warbands this week, only two elements on the table are not impetuous.

Rama's army defended. Both sides' knights opposed each other, with the Squidmen supporting their with the behemoth. The warband faced off in the centre, whilst Rama covered his other flank with some bears. Rama and Hanuman, the two heroes, sat in reserve. 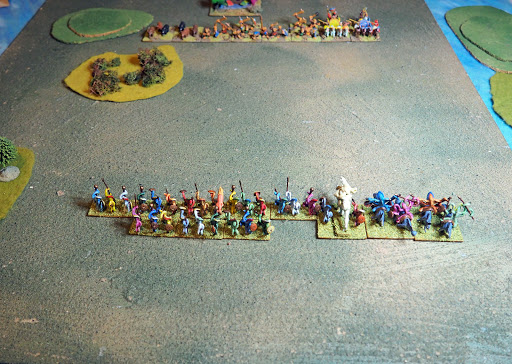 The Squidmen could match Rama's line and still afford to double-rank in places. 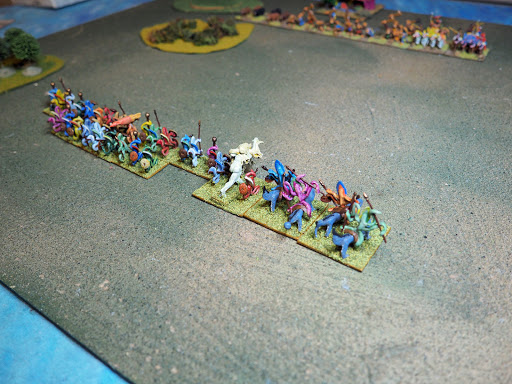 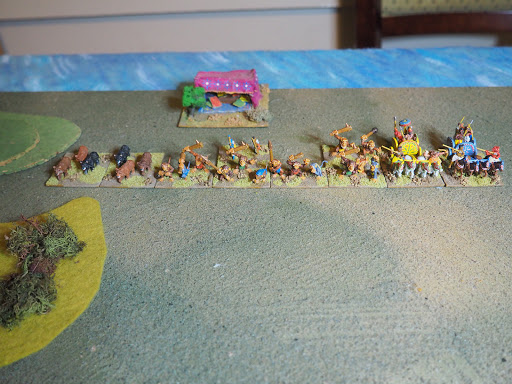 Both sides opted for a rapid advance, although the bears were initially slow to respond. 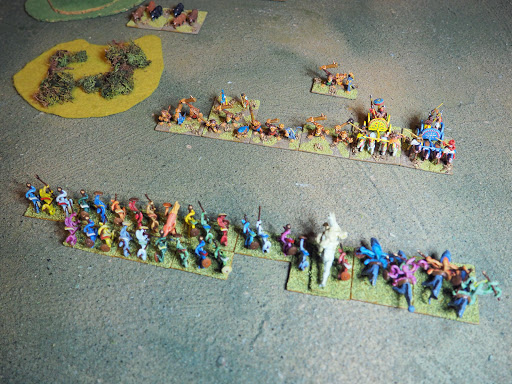 The were quickly into combat. The Squidmen's general led the attack, destroying the warband before them. 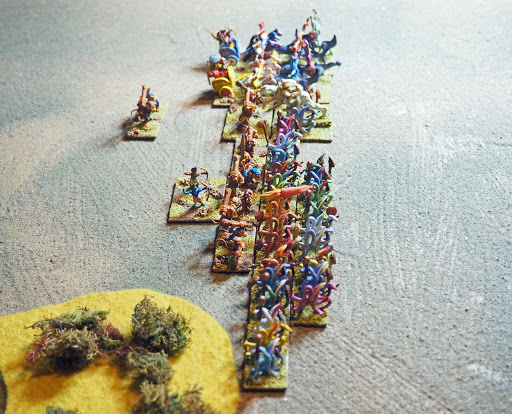 Hanuman led the attack on the behemoth, in order to draw it way from the rank-and-file monkeys. 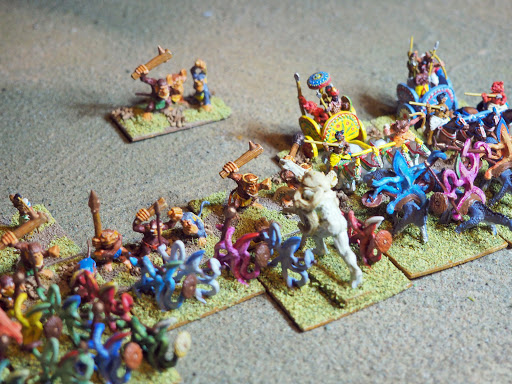 Rama's demon allies, in their mighty chariots, destroyed an element of land-sharks. 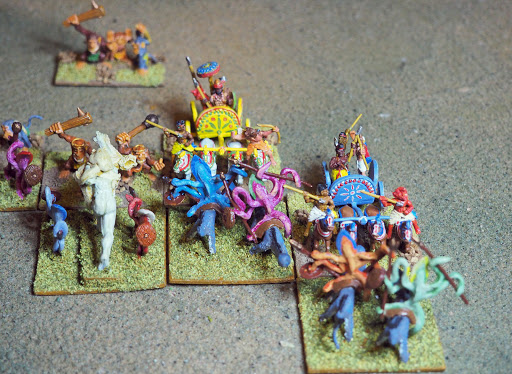 The bears moved up to cover Rama's right flank. 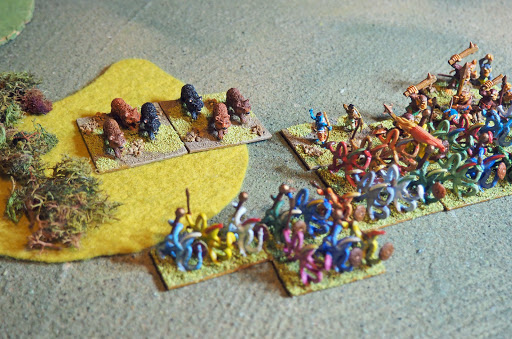 After the loss of one element on each side, the battle settled down to a shoving match, and elements recoiled and their opponents pursued, only themselves being forced to recoil in turn. With most elements in combat there was title scope for puling troops back to reorganise the line, which was a feature of the blade vs blade battle. 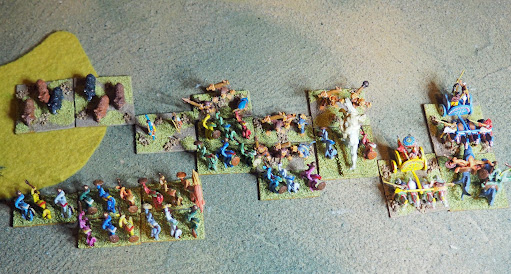 Rama himself had stepped up to plug the gap left by the destroyed warband. a few turns later, his luck ran out ... 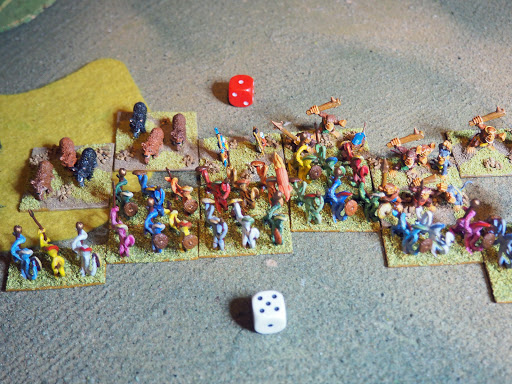 ... and he went down under a flailing mass of tentacles. Nasty. 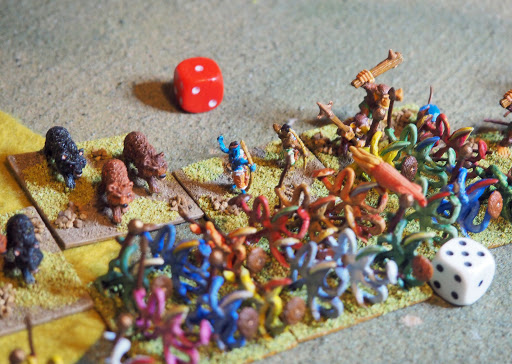 The rest of the army fought to try and even up the losses in order to stave off defeat, but only managed to destroy the other element of land-sharks. 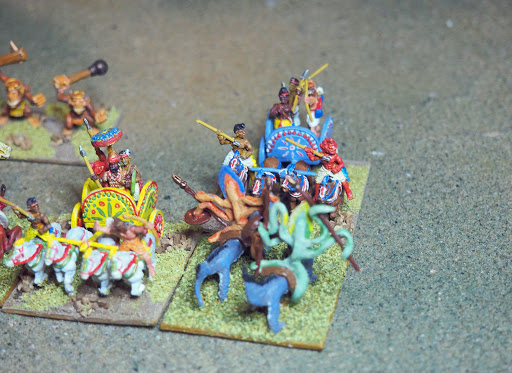 The Squidmen had won - they lost two elements of knights, whilst their opponents lost a warband and Rama himself. So low casualties considering how much combat there was. 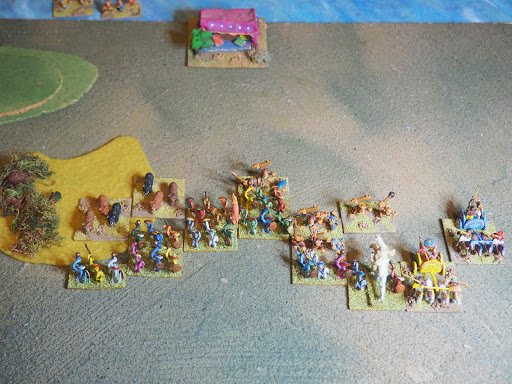 This was a quick game, as you might expect - less then thirty minutes from the point where I got the figures out of the boxes to the end of the game, and that included taking photos.
Posted by Kaptain Kobold at 07:18