A group of hunters are on a daring expedition. 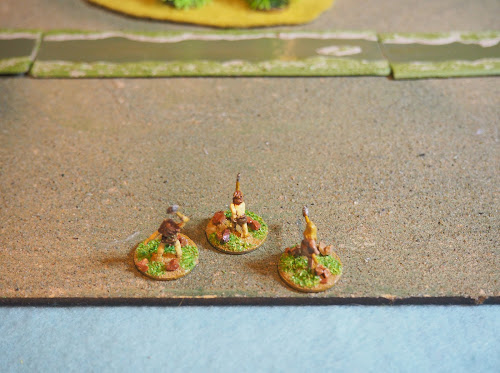 In a clearing in the forest cross the stream lives a small group of Hairies. The hunters' shaman has had a vision in which it was revealed that only the raw fresh heart of a Hairy can cure the chief of a mysterious ailment. The hunters must kill a Hairy, cut out its heart and take it back to the Tribe. 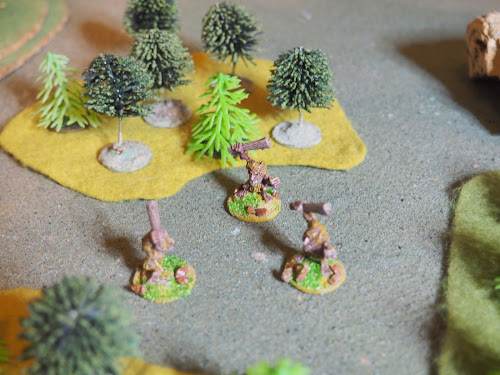 This was my first game using Great Bipeds which look, on paper, to be tricky opponents - quite aggressive and with good combat factors. The hunters had to kill one, then spend an action to remove the heart before exiting the board edge they entered from. A hunter carrying the heart would cunt as wounded for the purposes of attracting predators.
My initial plan was a standard one for hunting grazers - two hunters would go one way, whilst the third would move around the other side of the group and try to drive one of them towards his companions. 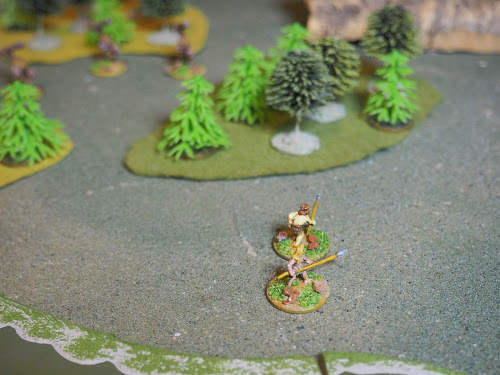 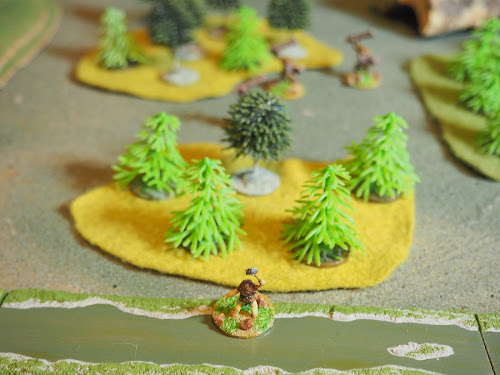 However it became obvious that the reaction table for Great Bipeds was one where moving away from scary noises or active hunters was on the cards. A more direct approach was required. In this case I decided to enter the clearing and simply attack the nearest Hairy. What could go wrong? 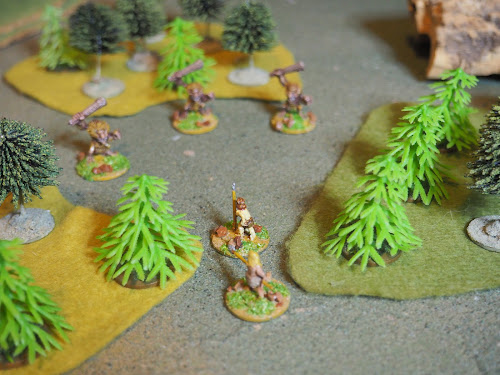 The hunters attacked, wounding their prey. But it attacked back, injuring one of the hunters. 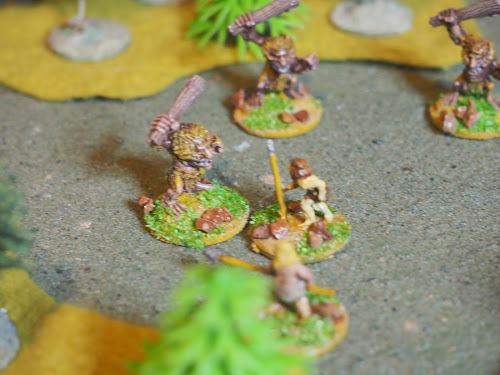 I then hit on the correct tactic (better late than never). This was to fall back, allowing the Hairies to follow. The vagaries of the random reaction system should see one of them follow ahead of its fellows, and it could then be mobbed and killed. The hunters fell back through the forest, and the Hairies pursued with varying degrees of enthusiasm. 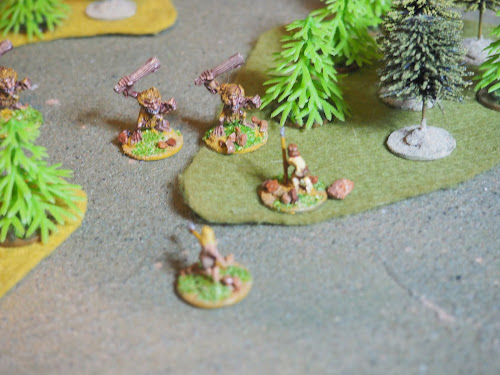 As anticipated, one got ahead of its fellows, and the hunters attacked, failing to wound it. 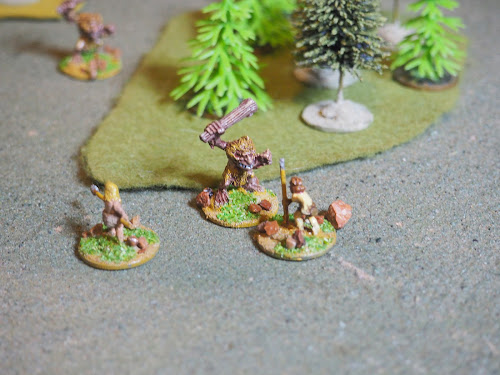 A second attack saw it seriously injured, though. 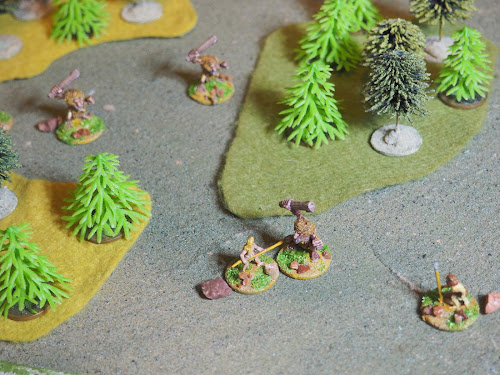 It roared, and the hunters fell back from the stricken, but still dangerous, beast. Both spear-armed hunters were now wounded, although a single hit would kill the Hairy. 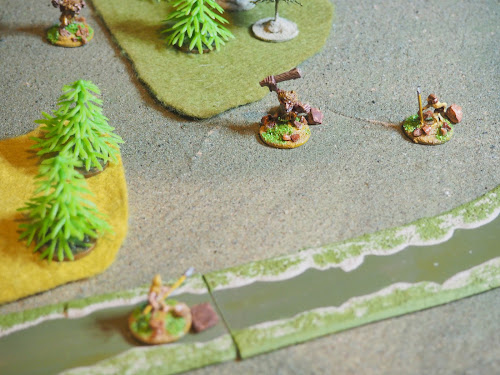 What of the third hunter? He was having trouble moving away from the clearing, since a large wolverine had appeared, attracted by the scent of blood. However he did inflict a second wound on the Hairy the hunters had attacked at the start. 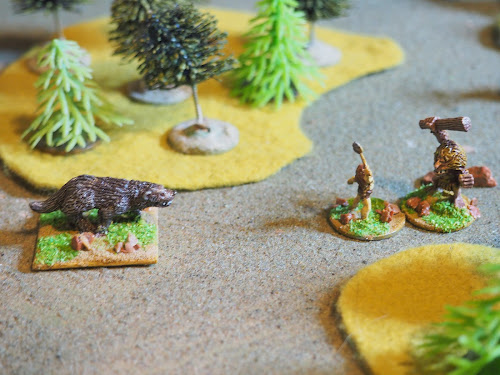 An overview of the hunt. 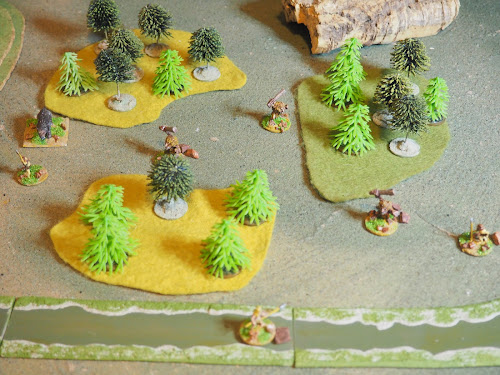 The wounded hairy attacked one of the spearmen, and killed him. 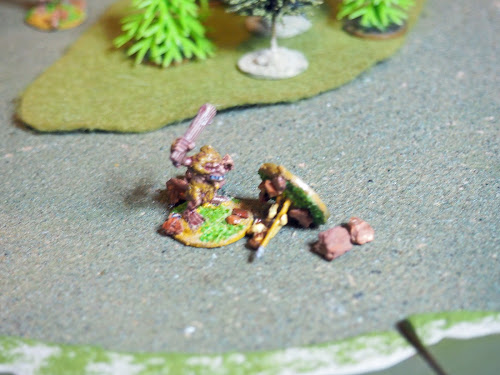 The axe-man had now extricated himself from the clearing, and warily approached the wounded Hairy in the open. Staying to kill the one in the clearing wasn't safe, since it would immediately attract the wolverine making life very difficult indeed. This Hairy was far enough from the predator to avoid attracting too much attention. 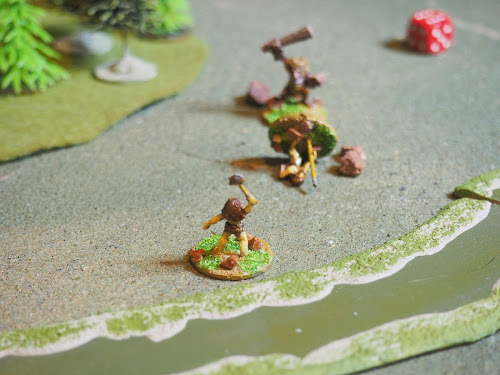 In fact the wolverine attacked the wounded Hairy in the clearing, killing it. This kept it busy for several turns as it ate the kill. And the third Hairy was so alarmed by its companion being killed, that it ran off into the forest and was never seen again. 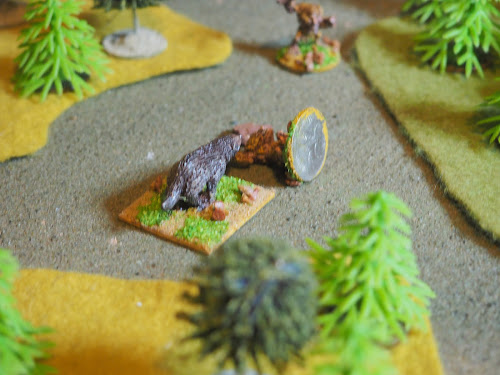 The hunter attacked the Hairy ... 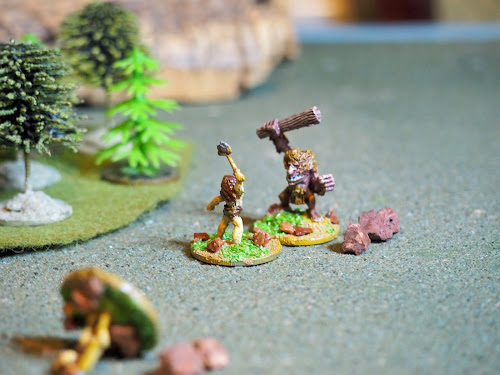 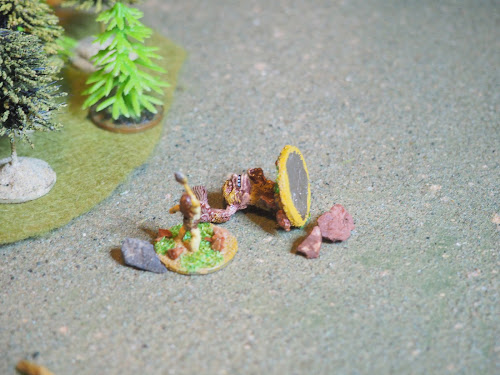 As the hunters cut out the heart they needed, the wolverine skulked away to sleep off its meal. 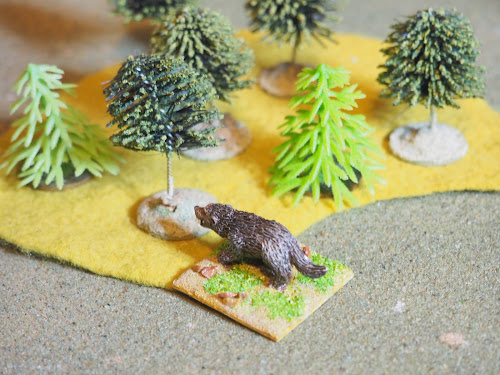 The hunters headed for home. One had been killed, and one injured, but the had the heart they needed. 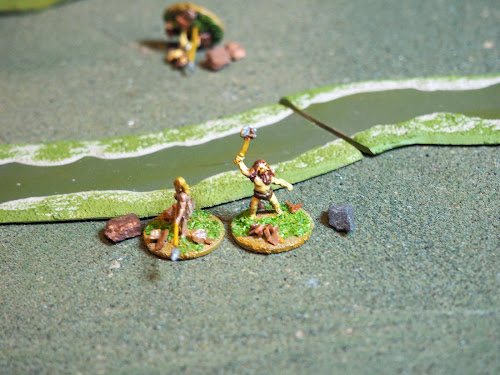 The Great Bipeds are a tricky foe, but I reckon drawing them out and them mobbing them is the way to go. I'll have to try this setup again.