Thanks to Geoff downsizing his figure collection, I scored these freebies on Thursday - a pile of Chariot (now Magister Militum) 15mm lizardmen, based for HOTT. 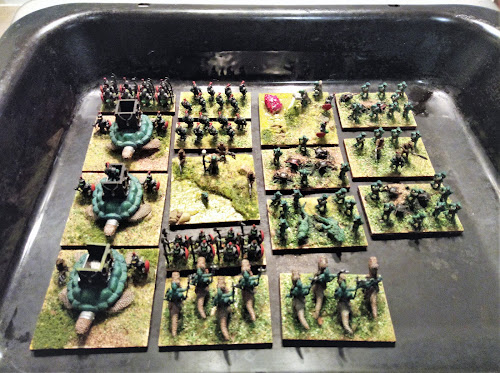 But why are they in a roasting tin, I hear you ask?

Well, they're based with loads of figures on a 60mm frontage, and to make them compatible with my HOTT armies (and most of the world's other 15mm armies, I need to rebase them onto 40mm frontages.

So I decided to strip them from their bases. And the last lot of figures I did that for were easily removed by soaking the base and the lower part of the figure in water to loosen the glue.

Not these though. Twelve hours in water and not a single figure will budge from the base. I'm going to have to prise each one off individually, although as I do so I will be able to remind myself that I don't have to paint them.

(Closer examination reveals that the two blocks of close-order foot are not, in fact, lizardmen, but duckmen painted to look like lizardmen. They will be put to one side for now, I think. I also have a small pile of unpainted Pendraken lizardmen which I can use to bulk this lot out, once I have an idea of how I want to organise it.)

Update: A hour or two with a sharp knife and  lot of care meant I was able to prise the figures from their bases. Adding in the Pendraken figures I reckon there's about 72AP of HOTT elements all told.
Posted by Kaptain Kobold at 21:42